“Banks’ small gesture that began through Twitter has snowballed into something truly amazing and something that is sure to change – in fact I’m sure it already has changed – many lives.”

“One woman died and several people were rushed to hospital Tuesday after fire broke out at a seniors’ independent living complex in west Edmonton.”

“Power rates for Edmonton-area consumers without contracts will jump almost 28 per cent in August — from 9.03 to 11.54 cents per kilowatt hour, the highest since February. The 2.51 cent increase will push up the average household’s monthly power bill by about $30.”

“After the province announced increased enforcement of the infamous stretch of highway out of Fort McMurray, CTV News has learned there will not only be officers on the ground, but eyes in the sky – tracking down speeding drivers.”

“Now, the 45-year-old is eager to snuggle down on his own customized mattress, made specifically for obese people weighing 250 pounds or more by an Edmonton company that gives a proportion of the retail sales to support the Canadian Obesity Network. Dr. Arya Sharma, scientific director for the Canadian Obesity Network, believes there is no other such mattress in the world like the one designed by Edmonton mattress manufacturer Araam Inc.”

“Air Canada pilots are concerned that the airline’s launch of a low-cost carrier could threaten their job security and working conditions, the union said Tuesday as the plans came closer to fruition after an arbitrator sided with the airline in a labour dispute.”

Yeesh. Always so much strife within Air Canada, it feels like.

“Michael Phelps swam his way into Olympic history books Tuesday, nabbing his 19th Olympic medal. The 27-year old swimmer took home the silver medal in to 200 butterfly and then anchored the United States to gold in the 4×200 freestyle relay. Phelps broke a record set by Larisa Latynina, a Soviet gymnast who won her last of 18 Olympic medals back in 1964.”

“The story of a 14-year-old girl who underwent plastic surgery to put an end to years of schoolyard taunting has sparked debate over what many believe is a drastic response to bullying. U.S. teen Nadia Ilse got $40,000 worth of surgery for free through the Little Baby Face Foundation, which offers corrective surgery for children with facial deformities and, apparently, those who are bullied because of their appearance.”

“India’s power outage spread to more than half the country Tuesday, making it one of the world’s largest ever blackouts. More than 620 million people have been affected by the outages. That’s more than the combined populations of Canada, the U.S., and Mexico.”

“No currently available Alzheimer’s drug provides much, if any, improvement, and all can cause side effects. Still, if you feel compelled to try a drug to help someone you care for, you could consider donezepil (Aricept) or galantine (Razadyne). Neither works better than other Alzheimer’s drugs, but they might be somewhat better tolerated and are available as low-cost generics.”

“Americans seem to be getting sicker. The number of Americans aged 45 and older with at least two chronic health conditions has grown by 17 percent in the last decade, research by the US Centers for Disease Control and Prevention has found. The research found that over 20 percent of Americans between the ages of ages 45 to 64 have at least two ongoing health problems, up from about 15 percent in the year 2000, HealthDay reported.”

“Researchers say that working during your final month of pregnancy is as harmful as smoking. The research, performed by the University of Essex, showed that just like lighting up, working late into pregnancy leads to newborns that are a half pound smaller than infants whose mothers quit work between their sixth and eighth months of pregnancy.”

Excuse to slack off in that final month now! :)

“Meet Pronto, a condom that claims to go from package to shaft within three seconds. Pronto is the work of South African inventor Willem van Renburg, who sought to develop a barrier method that didn’t “kill the mood” with all that awkward fumbling. Seeing that South Africa is home to the world’s highest population of HIV-positive people, the device could also help prevent the virus’ spread in a matter of seconds.”

“You’re a savvy worker, so you can multitask with the best of them, pinging out text messages while listening to conference calls and tending your Twitter stream. Pleasanton, Calif., entrepreneur Bryan Wassom wants you to consider adding one more task: pedaling. Millions of office workers spend long hours at their desks. But they need a little exercise too, and Wassom’s preparing to market his own workaholic’s solution – it’s a desk crossed with a modified recumbent bike.”

“Insects, or mini-livestock as they could become known, will become a staple of our diet, says Gaye. It’s a win-win situation. Insects provide as much nutritional value as ordinary meat and are a great source of protein, according to researchers at Wageningen University in the Netherlands. They also cost less to raise than cattle, consume less water and do not have much of a carbon footprint. Plus, there are an estimated 1,400 species that are edible to man.”

“Timeline, Facebook’s hypergraphical profile triumph, has been around for almost a year—and there are still people either ignorant of or averse to the redesign. Tough pokes, says FB: you’re getting switched before the year is over. TechCrunch reports all of Facebook’s Timeline holdouts will soon see a message prompting them to prepare for the switchover, providing a chance to hide photo albums of you shotgunning beers and add “Life Events” like marriage and lockjaw. Then, after seven days, boom—you’re Timelined, and there’s no going back.”

I’m surprised it’s taken this long for them to force Timeline on everyone.

“Not only does this particular event smack of heavy-handed special treatment since NBC is Twitter’s corporate partner in covering the Olympics, but it marks the latest milestone in Twitter’s eroding commitment to free speech and keeping its hands off your tweets.”

“Quite simply, Twitter never wants to be responsible for pro-actively monitoring content. That’s why it requires reports for every violation. That’s why it keeps emphasizing it was following the rules. That’s why it’s apologizing. It wants the precedent that this has set — monitoring a tweet and then acting upon a violation — to be erased, because it wants never to have that responsibility on its hands, no matter who asks, whether it’s a celebrity or corporate partner, or perhaps more crucially, the government. So as far as Twitter is concerned, potentially screwing up that precious arrangement is really the only thing it did wrong. And it’s real sorry about that.”

“Microsoft Tuesday previewed a new webmail service called Outlook.com that will soon replace Hotmail. The company hopes that new features built into the web-based Outlook client will draw web users away from competing services like Gmail and Yahoo.”

“Canadians are far happier with their Olympic television experience than Americans, according to an analysis of Twitter comments in the early days of the London Games. Ottawa-based media monitoring company Media Miser found 50 per cent of the tweets referencing CTV – the main broadcaster in Canada’s Olympic Consortium – were positive in the first three days of competition. The rest were negative (28 per cent) or neutral (22 per cent). The network has made an unprecedented amount of coverage available to its viewers, with more than 5,000 hours available on televisions, phones, tablets and computers.”

“Productivity experts are predicting that this year’s games could result in a summer slowdown perhaps unlike any other in history, with millions of American workers devoting portions of their day to track and field instead of, say, tracking customer orders. The wasted time could result in a $650 million hit for U.S. companies, according to an estimate by Captivate Network, a digital media company.”

“Gary Harrington, an Oregon man, will be spending a month in jail, after being convicted on nine misdemeanor charges. His crime? “Illegally” collecting rain water on his own property.” 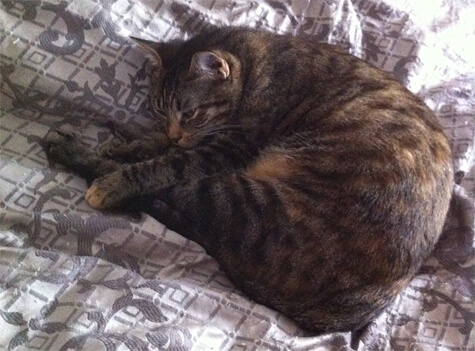 Linda Hoang is a Canadian blogger based in Edmonton, Alberta, who writes about travel, food, lifestyle and pet topics. She's also a seasoned social media/digital strategist with a journalism background, the founder of the Edmonton International Cat Festival and co-founder of Stop Race Based Hate, an online anti-racism education tool. Linda loves exploring the world with her partner Mike, eating their way through cities, supporting local businesses, and photographing Instagrammable Walls. Linda is a fur-mom to two cats and two dogs.
PrevPreviousSocial Media Column: Kindness to be found on social media
NextClicks of the Day: Wednesday, August 1, 2012 Edition!Next