“A senior official with Alberta Health Services has stepped down from his position after the health authority became aware of almost $350,000 in expenses he racked up while working for Edmonton’s former health region. Critics deemed the expenses at high-end restaurants and for apparent car repairs to a Mercedes-Benz “outrageous” and “lavish” and are demanding a full inquiry.”

“City of Edmonton Officials are investigating, a day after a young boy died after being pulled from the pool at a northside recreation centre Tuesday afternoon.”

“It all came out in the wash, say cops now looking for a robber who left his ID in some laundry. A man was caught by a resident 8:30 a.m. Monday near 109 Street and 88 Avenue changing into clean clothes that were hanging on the backyard laundry line, say cops. The riled resident told police he ordered the would-be crook to change out of the clothes and back into his dirty threads. The male homeowner then went to rewash the pile of laundry and found the wanna-be thief’s wallet and ID in a pant pocket.”

“Edmonton’s Heritage Festival is growing. Heritage Festival’s executive director Jack Little predicted a full house for 2012’s festival — he guessed the popular summer event would see 63 pavilions representing 80 different countries. On Wednesday, he announced it had exceeded that number. “There are 62 pavilions but we actually have 85 countries being represented this Heritage Festival, so that’s exciting,” he said.”

I am missing this year’s fest because of work! I hope everyone enjoys!!

“Nearly a third of young Canadians have not tucked away any money for retirement, even though many plan on leaving the workforce before they hit age 60, a recent survey suggests.”

“A police investigation is underway after a sewing needle was found in a sandwich on an Air Canada flight from Victoria to Toronto earlier this week. The needle turned up Monday on flight AC190 bound for Pearson International Airport, inside what Air Canada spokeswoman Angela Mah said was a pre-prepared sandwich provided by a catering company.”

What is up with these needles in airplane food…

“Arab countries pushed ahead Wednesday with a symbolic U.N. General Assembly resolution that tells Syrian President Bashar Assad to resign and turn over power to a transitional government. It also demands that the Syrian army stop its shelling and helicopter attacks and withdraw to its barracks. A vote is set for Friday morning.”

“Eight female badminton doubles players were disqualified from the London 2012 Olympic Games after trying to lose matches to receive a more favourable place in the tournament, Indonesia’s team leader said Wednesday. The Badminton World Federation investigated two teams from South Korea and one each from China and Indonesia. It accused them of “not using one’s best efforts to win a match” and “conducting oneself in a manner that is clearly abusive or detrimental to the sport” in matches Tuesday night.”

“Drinking caffeine each day might help Parkinson’s patients move a little easier, making their walking more fluid and improving their quality of life, new Canadian research has found. The researchers say the improvements are small, but their research suggests there’s something about caffeine that blocks malfunctioning brain signals in Parkinson’s patients.”

“It sounds like an unfolding epidemic: A decade ago, virtually no one in the U.S. seemed to have a problem eating gluten in bread and other foods. Now, millions do. Gluten-free products are flying off grocery shelves, and restaurants are boasting of meals with no gluten. Celebrities on TV talk shows chat about the digestive discomfort they blame on the wheat protein they now shun. Some churches even offer gluten-free Communion wafers. “I don’t know whether there’s more people getting this or that more people are noticing” they have a problem, said the Rev. Richard Allen, pastor at Mamaroneck United Methodist Church, north of New York City. Or is it just another food fad?”

Sometimes it feels faddish. (No offence to those who actually can’t eat gluten!)

“iMore is reporting that Apple will announce the new iPhone and an iPad Mini on September 12, for release on the 21st. The relatively earlier-than-expected announcement would make some sense; Apple repeatedly cited next-generation iPhone rumors as being the reason iPhone 4S sales fell short last quarter, so the sooner a new product hits shelves the better.”

“Web search has evolved from traditional query typing to voice search, to auto-complete and even image searches. Now search giant Google is taking the next step in making finding stuff on the web easier by augmenting its mobile search offerings with handwriting recognition.”

I don’t know if I would really use such a feature.

“Research In Motion is making further reductions across its operations as a source confirmed Wednesday that it will shutter its North American retail stores, while a separate report suggests the BlackBerry-maker is about to cut another 3,000 jobs.”

“WestJet Airlines Ltd will introduce new “premium economy” seating across its fleet in a bid to generate more revenue, a departure from the Canadian carrier’s roots as a low-cost challenger to Air Canada.”

I am okay with regular economy.

“Scientists drilling deep into the edge of modern Antarctica have pulled up proof that palm trees once grew there. Analyses of pollen and spores and the remains of tiny creatures have given a climatic picture of the early Eocene period, about 53 million years ago. The study in Nature suggests Antarctic winter temperatures exceeded 10C, while summers may have reached 25C.”

“In Italy, it is now a crime punishable by a fine to tell a man that he “has no balls” following a ruling by the country’s highest court. Agence France-Presse reports that a lawyer, named only as Vittorio, sued his cousin Alberto, a justice of the peace, for hurling the common insultory phrase during a courtroom argument in the southern city of Potenza, Basilicata.” 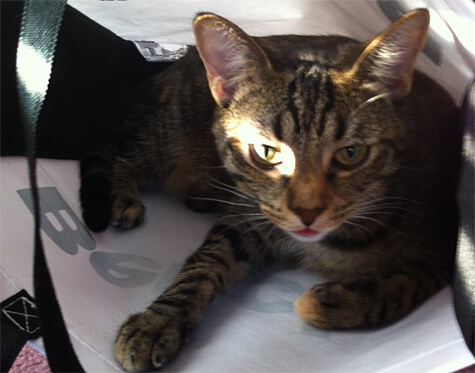 Linda Hoang is a Canadian blogger based in Edmonton, Alberta, who writes about travel, food, lifestyle and pet topics. She's also a seasoned social media/digital strategist with a journalism background, the founder of the Edmonton International Cat Festival and co-founder of Stop Race Based Hate, an online anti-racism education tool. Linda loves exploring the world with her partner Mike, eating their way through cities, supporting local businesses, and photographing Instagrammable Walls. Linda is a fur-mom to two cats and two dogs.
PrevPreviousClicks of the Day: Tuesday, July 31, 2012 Edition!
NextClicks of the Day: Thursday, August 2, 2012 Edition!Next