“The City of Edmonton will become the first major municipal government in Canada to use Google email and other office technology apps for all City employees. An agreement recently signed with Google opens the door for all City employees to access their online resources from any place, location and with any device.”

“Power consumers in Alberta will pay about 25 per cent less for electricity this year than last, according to FirstEnergy Capital Corp. The drop in prices is being driven by low natural gas prices, but continued growth in industrial demand, particularly from the oilsands, will see prices trend upward by 2013, analyst Martin King said.”

Sure they say this now when it’s becoming summer so you’re likely to use less power anyway. Bitter consumer.

“Tens of thousands of federal employees are bracing for the axe to begin dropping Wednesday when the government notifies the largest number of departments and agencies yet about pending job and service cuts. Town hall-style meetings are scheduled this week at Veterans Affairs Canada, Health Canada, the Canadian International Development Agency, the Canadian Food Inspection Agency and others as the government moves ahead with its plan to cut 19,200 federal public servants over the next three years.”

“Canadian wallets and change purses will get a noticeably different feel as the Royal Canadian Mint unveiled a new generation of one-dollar and two-dollar circulation coins with enhanced security features. The Government of Canada says the new coins will be more resistant, long-lasting and cheaper to produce with its patented Multi-Ply Plated Steel technology. The reverse (or tails side) of both coins features a laser mark micro-engraving, and the two-dollar coin contains a virtual image and edge-lettering.”

“Rick Santorum ended his bid for the Republican presidential nomination on Tuesday, exiting the bruising race after months of giving the wealthy Mitt Romney an unexpected run for his money.”

“The Trayvon Martin case took a bizarre turn Tuesday when George Zimmerman’s attorneys quit, complaining that they had lost all contact with him and that he called the prosecutor and talked to a TV host after they told him not to speak to anyone. And late Tuesday, special prosecutor Angela Corey said she would announce “new information” about the controversial case within 72 hours. She did not elaborate.”

“A cruise ship retracing the route of the Titanic had to interrupt its journey on Tuesday because of a medical emergency on board, organizers said. The Titanic Memorial Cruise, which was on its way to the North Atlantic site where the Titanic hit an iceberg and sank 100 years ago, was working with the Irish Coastguard to arrange for a passenger to be airlifted to a hospital.”

Hope the passenger is okay! But also, how creepy is this re-enactment of the Titanic route? Eerie…

“The last time anyone saw Guggenheim and his valet, they were sitting in the staircase, smoking cigars. Both perished, their bodies never identified. Their willingness to resign themselves to a watery grave saved others. In fact, the overwhelming statistics are that 80% of the men aboard Titanic died, but only 26% of women passengers died. It was a different time. Fast forward to January 2012 and the partial sinking of cruise ship Costa Concordia off the west coast of Italy. With over 4,200 passengers and crew aboard, it seems the subsequently arrested captain was one of the first to abandon ship. In terms of lives lost, the scope of this disaster is nowhere near that of Titanic. Yet, it is impossible not to compare them.How did “women and children first” become the rule of the sea? It was because society viewed women and children as worth protecting. Honoring women as a matter of everyday custom led men to give preference to women when it came to life-and-death crisis. Why did “women and children first” on the Titanic give way to “every man for himself” on the Costa Concordia? Because we no longer value protecting womanhood, at least not like we once did.”

“Canadian researchers are issuing fresh warnings that the routine practice of giving children codeine after tonsil surgery can be deadly. In 2009, researchers from the University of Western Ontario in London and the Hospital for Sick Children in Toronto were the first in the world to report a fatal case of a toddler who died after receiving codeine following surgery for sleep apnea. Now, the team is reporting on three more cases — two deaths and a near-fatal reaction. Two of the cases occurred in Ontario. In the fatal cases, the children were found dead in their beds after receiving codeine.”

“While almost 90 per cent of working Canadians say they find time for Facebook and other personal activities during their work day, just one in five find time for physical activity, according to a new survey. The survey, commissioned by ParticipACTION, said the main reason Canadian employees are not taking a break for physical activity during work hours is because they say they don’t have the time.”

Well it’s just easier… Sigh I need to get back into a fitness schedule.

“Instead of exuberant rejoicing over the announcement of Facebook’s mega-acquisition of Instagram yesterday, there’s been a lot of woe-is-me chatter among the photo app’s users. One of the reasons may be because the two social networks cater to different groups of people. Instagram’s users, on the whole, are quite a bit younger than Facebook’s, according to a study done by consumer behavior research group Experian Hitwise.”

“When Instagram launched its first app in October 2010, it did not strike most people as the kind of startup that would be acquired for $1 billion. “We were all like, ‘what’s the big deal? It’s just photos and filters,” Brian Blau, a Research Director with the Consumer Technology and Markets Group at Gartner, tells Mashable. But in retrospect, he adds, “There’s something to be said around that simplicity.” The app had almost 200,000 users within the first week. By February, it had 1.75 million users, and three months later that number had jumped to 4 million. By the time Facebook acquired Instagram on Monday, the startup’s iPhone app had been downloaded 30 million times.”

“Software engineer was ranked No. 1 in a list of the best jobs of 2012 published by CareerCast.com. It was the second year in a row this position snagged the top spot, thanks in part to an explosion of data that companies and governments need to gather, analyze and turn into productive uses. The field offers a midrange income of $88,142, according to CareerCast. The worst job? Lumberjack. That pays a midrange income of $32,114.”

Check out the full list of Best and Worst Jobs 2012, newspaper reporter is considered the fifth worst. Lol. 196/200 is pretty bad. But there’s always perspective! I just can’t see how “Vending Machine Repairer” (among others listed) can be a better job than a newspaper reporter… lol.

“Other rewards highlighted in the review, published this month by IdeaWorks, include a leather vest autographed by George Clooney (Air Canada, 177,000 points); a wine-of-the-month club membership (Qantas, 13,000 points); a hot lather shave (AviancaTaca, 8,250 points); and even enrolment in a Flying Without Fear class, which addresses individual travel phobias — claustrophobia, for example — enlists a therapist to teach psychological techniques for beating anxiety, and concludes with a 45-minute voyage on a commercial aircraft (Virgin Atlantic, 35,000 to 40,000 points).”

“Springfield was named after Springfield, Oregon. The only reason is that when I was a kid, the TV show “Father Knows Best” took place in the town of Springfield, and I was thrilled because I imagined that it was the town next to Portland, my hometown. When I grew up, I realized it was just a fictitious name. I also figured out that Springfield was one of the most common names for a city in the U.S. In anticipation of the success of the show, I thought, “This will be cool; everyone will think it’s their Springfield.” And they do.”

Cool!! My cousins live in Portland so I feel like I have a closer connection to this announcement, lol. Though it seems like they could have done a lot to lead up to the announcement of which Springfield it is… an entire episode devoted to it… online contests, other promotions. Seems odd to just let it out in a random interview, lol.

“‘As a writer and a director, I simply don’t have the time I need to write and prep the movie I would have wanted to make because of the fixed and tight production schedule,’ Ross said in a statement late Tuesday.”

You should never rush greatness, lol.

“A premature Argentine baby has been found alive in a morgue, 12 hours after she was pronounced dead, reports say.”

“In a rare and a first-of-its-kind phenomenon, a Silver Pheasant, a bird belonging to the peacock family, has changed its sex from female to a male. Confirming this and terming it a kind of “sex dimorphism”, zoo director Renu Singh told IANS that the phenomenon had surprised most of the staff in the zoo.”

“The latest, the Ramos Clock, might be “the world’s most exasperating alarm clock”, according to the AP. The only way to stop its incessant ringing — which sounds like angry pounding of a hotel’s concierge bell — is to get out of bed and type in a code on the clock’s wireless “Defuse Panel”, which you might store in the kitchen, bathroom or somewhere else outside the bedroom. Unplugging it won’t do the trick either, as Ramos has an internal battery with hours of juice.”

I’ve never had a problem getting up so needing an alarm like this is silly to me. 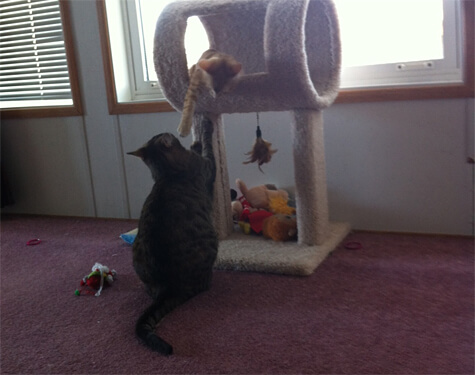 Linda Hoang is a Canadian blogger based in Edmonton, Alberta, who writes about travel, food lifestyle and pet topics. She's also a seasoned social media/digital strategist with a journalism background. Linda loves exploring the world with her husband Mike, eating their way through cities, supporting local businesses, and photographing Instagrammable Walls. She is the founder of the Edmonton International Cat Festival and a fur-mom to two cats and two dogs.
PrevPreviousClicks of the Day: Monday, April 9, 2012 Edition!
NextClicks of the Day: Wednesday, April 11, 2012 Edition!Next