“Construction is scheduled to start next month on a long-term plan to restore Jasper Avenue to its place of honour as Edmonton’s Main Street. A controversial makeover in the 1980s that included several blocks of concrete medians decorated with globes — described by one councillor as “bunkers with hand grenades at each end” — failed to stem Jasper’s deterioration. A new vision approved in 2009 aims to change all that. This scheme, arising from the need to fix the water-damaged Central LRT station roof, is intended to revitalize downtown and put more pedestrians on the street.”

“Eco-warrior to some, terrorist to others, Wiebo Ludwig was for decades a polarizing figure in the debate over northern Alberta’s oil and gas industry. Ludwig died Monday at the age of 70 after a battle with esophageal cancer.”

“The Alberta government received less than 20% of revenue generated by the oilsands since 1997 — short of its original target of 35% — a new report says. In the University of Alberta’s Parkland Institute study, completed in mid-March, the Edmonton-based think-tank concluded the oil and gas industry has raked in $260-billion in pre-tax profits since 1986, while the public received less than $25-billion — less than 6% of the total value.”

“Thousands of students armed with Canadian flags and banners paid silent tribute to nearly 3,600 fallen countrymen Monday as they embarked on a slow march to commemorate the 95th anniversary of the Battle of Vimy Ridge. An estimated 5,000 students braved persistent, driving rains as they plodded solemnly from the towering limestone pylons of France’s Vimy Ridge Memorial to a pair of cemeteries where some of Canada’s First World War dead are buried.”

Thank you to those who fought and sacrified their lives at the Battle of Vimy Ridge.

“A military bombardment of a town in central Syria killed 35 people on Monday on the eve of a scheduled army withdrawal from urban areas, opposition activists said, while on the same day a cameraman for Al-Jadeed television channel was shot dead in the border region between Syria and Lebanon’s Wadi Khaled district, sources said. The military bombardment has dashed the prospects of a U.N.-brokered ceasefire taking hold.”

So much for that ceasefire.

“The United States urged North Korea on Monday not conduct a nuclear test or launch a satellite and called on China to exert its influence over its neighbor to try to ward off such ‘provocative actions.'”

Man this is scary.

“From hiding, George Zimmerman has created a website to raise money for his legal defense and living expenses while he awaits a special prosecutor’s decision whether to charge him in the shooting death of unarmed black Florida teenager Trayvon Martin. One of Zimmerman’s lawyers, Craig Sonner, confirmed on Monday the site was legitimately Zimmerman’s.”

“Women who are obese during their pregnancies are significantly more likely to have a child with autism than healthy-weight mothers, according to the latest research into the sobering risks of obesity in pregnancy. The new study of more than 1,000 children and their mothers provides evidence that obesity and diabetes during pregnancy may be risk factors for autism spectrum disorder and other neurodevelopmental problems in childhood — a finding the authors warn could have serious public-health implications given ever rising rates of obesity. In the U.S., nearly 60 per cent of women of child-bearing age (20 to 39) are overweight; one-third are obese.”

“Scientists have found new evidence that resistance to the front-line treatments for malaria is increasing. They have confirmed that resistant strains of the malaria parasite on the border between Thailand and Burma, 500 miles (800km) away from previous sites. Researchers say that the rise of resistance means the effort to eliminate malaria is ‘seriously compromised.'”

“Aussie scientists are studying spider venom with the hope it could hold the key to curing breast cancer.”

“The major decisions we make in life – from getting married to having kids to getting a divorce — may be influenced by subconscious thoughts of how long we think we’ll live, new Canadian research suggests. The theory suggests that those who anticipate living longer delay milestones such as marriage and having babies, and instead invest more time in school. Those who believed their lives are shorter may be less likely to divorce since there’s limited time to find a new partner.”

I don’t really agree with that. I hope (intend) to live a very long and full life and that also includes getting married young. I also have no intention of getting a divorce (though who actually intends on getting a divorce going into a marriage?)

“Whale vomit, a key ingredient in perfume, could be left out at sea as researchers have isolated a tree compound that could replace the odd ingredient. The discovery made by researchers at the University of British Columbia identified a gene in balsam fir trees that could eliminate the need for ambergris — a strong perfume fixative created from a regurgitated mixture of seashells, fish bones and a sticky inner-stomach substance that turns into a rock-like object once it reacts with sea water.”

“Sometimes Danielle Deveaux feels like she’s working out in her own private gym. She’s not, of course. But at 10 o’clock at night, when there’s no one else around at the Snap Fitness Centre where she exercises, it can seem that way. Deveaux is part of a growing number of night owls, insomniacs and shift workers taking advantage of gyms that are open 24 hours a day, seven days a week; especially no-frill franchises that are unstaffed after hours and can be accessed with the swipe of a security card or key fob. Even people who don’t work out late at night want the option.”

There’s definitely demand for it.

“A Montreal walk-in clinic is doing something pretty cool and hopefully the idea gets picked up by hospitals across the country. Sitting and waiting for hours to be diagnosed by a doctor can be a long haul, up to several hours, mainly caused by lack of funding and staff. Once you check in you then proceed to wait in a room with all the other sick people, just staring at each other. At the MDCM walk-in clinic on St. Jacques St. West has implemented a phone service where people can get notified via text or voicemail of when a doctor will see them – within a hour! Patients will have to pay $3 per visit, but this gives them the flexibility to leave the clinic without missing their spot in line.”

“Ahead of its blockbuster initial public offering, Facebook Inc. bolstered its photo-sharing features Monday by acquiring photo-sharing mobile app Instagram in a US$1-billion cash and stock deal. By far the largest acquisition in the 8-year history of Palo Alto-based Facebook, the purchase comes just weeks in advance of when the world’s largest social network is expected to launch a US$5-billion IPO, which would be among the largest public stock offerings in the history of the United States. ”

Pretty good investment on Facebook’s part I’d say. But will it be good for users?

“Facebook’s planned acquisition of Instagram is already raising privacy concerns, despite chief executive Mark Zuckerberg’s pledge this morning that he wouldn’t simply “integrate everything” into the larger social-networking site. One big — and unanswered — question is how tightly integrated the popular photo-sharing service will become with Facebook. All photos shared through Instagram are public by default. But users can go to a settings menu and enable a “Photos are private” option, meaning that future (but not existing) followers of that Instagram user will require approval. Few people appear to take that extra step.”

We’ll just have to wait and see now won’t we.

“Think back six months. You probably never had heard of a little website called Pinterest. Now it’s the third most-visited social-networking site in the United States, according to a report released Thursday by Experian Marketing Services, a digital marketing firm. Pinterest, which lets its users “pin” photos and info from the Internet onto virtual boards, ranks behind only Facebook and Twitter in terms of total visitors, according to the analysis, titled ‘The 2012 Digital Marketer: Benchmark and Trend Report.'”

When things catch on they really do catch on.

“Sony Corp. (6758), the Japanese electronics maker that has forecast a fourth straight annual loss, will slash about 10,000 jobs, or 6 percent of its workforce, the Nikkei newspaper reported on its website.”

That’s a lot of jobs…

“Forrester found that the impact of customer experience on hotels and wireless service carriers was more than $1 billion for each industry. For hotels, the potential impact is $1.36 billion, while for carriers it is $1.3 billion. The main finding, as it has been for the past several years, is that companies with higher customer experience scores tend to demonstrate and drive higher customer loyalty. They are also more likely to win recommendations from those customers, which translates into incremental revenue, the report suggested.”

Give me good customer service and I will keep coming back… great example: AMAZON! Love Amazon so much.

“By tossing the two-week standard in favor of an honor system with unlimited time off, some companies are seeing an exponential rise in productivity. Now, they just have to be mindful of staff burnout.”

“A cop walks around a corner and catches a man smoking a joint. “Really sorry, officer,” he says, stubbing it out, “but I swear I was just smoking it for a friend.” No, that doesn’t make a lot of sense, and it doesn’t mitigate the crime. But that’s basically the excuse offered by bestselling author Josh Linkner when he was recently busted for plagiarizing the opening paragraphs of a blog post by Chris Dixon.”

“Averting the worst consequences of human-induced climate change is a “great moral issue” on a par with slavery, according to the leading Nasa climate scientist Prof Jim Hansen. He argues that storing up expensive and destructive consequences for society in future is an “injustice of one generation to others”. Hansen, who will next Tuesday be awarded the prestigious Edinburgh Medal for his contribution to science, will also in his acceptance speech call for a worldwide tax on all carbon emissions.”

“You know Frank Gehry’s Dancing House in Prague? The one that looks like someone kicked the side in? Turns out, someone did kick the side in! And that someone is Kickboxing Kitty. There’s a lot more where that came from on Furrrocious Forms, a Tumblr of architecture-themed LOLcats started by a bunch of “stir crazy” students at UC Berkeley’s College of Environmental Design.”

“This little guy goes bonkers for some catnip.”

LOL. Hope it doesn’t get addicted. 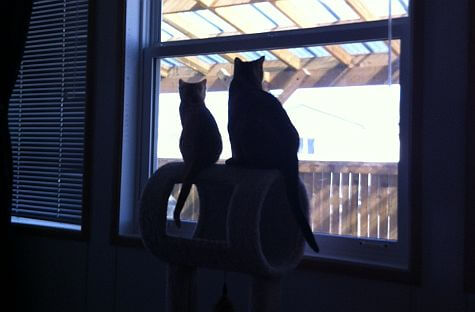 We hope to take another photo of them in this exact position when they’re old!!

Linda Hoang is a Canadian blogger based in Edmonton, Alberta, who writes about travel, food lifestyle and pet topics. She's also a seasoned social media/digital strategist with a journalism background. Linda loves exploring the world with her husband Mike, eating their way through cities, supporting local businesses, and photographing Instagrammable Walls. She is the founder of the Edmonton International Cat Festival and a fur-mom to two cats and two dogs.
PrevPreviousClicks of the Day: April 6, 7, 8 2012 Weekend Edition!
NextClicks of the Day: Tuesday, April 10, 2012 Edition!Next