“In a sound clip sent to CTV News, the principal of Ross Sheppard High School was recorded talking about the controversial ‘No zero’ policy at the school, and the public outcry surrounding it. The principal said the practice of handing out behavioural codes instead of zeros for incomplete work was helping students learn – he also took aim at the media. “In my opinion, the culture of the media deteriorated to the quality of pulp fiction and talk radio,” Bradley can be heard saying. He also called the media view on the subject ‘narrow.'”

“Edmonton Catholic Schools support staff are in the position to legally strike – after they rejected the school board’s latest contract offer. The workers cast their votes on the matter Wednesday night. The majority of workers voted against the latest contract, which was offered to them over the summer.”

That sucks – one week after school starts?

“Paying off mortgages, buying sports cars, travel and retirement – they’re just some of the things the 18 men who won last week’s $20 million Lotto Max jackpot have planned for their portion of the winnings. The 18 steamfitters, welders and pipefitters from Edmonton Exchanger discovered they had the winning numbers Saturday – after one of the group members checked the numbers.”

I am soooo jealous of them!!

“City staff are working on designs for a new pedestrian bridge over 97th Street to replace one of the last remaining “rat holes” in the city. The foot path over the former train bridge at 104th Avenue currently leads only to an empty lot and creates a dark tunnel where it crosses 97th Street. The city’s concept plans call for a pedestrian bridge, part of a multi-use trail to run the length of the north end of downtown to Grant MacEwan University.”

I would definitely call it a rat hole currently. Hate walking under that bridge!!! Happy it’ll be revamped.

“One of Bogdan Pamfil’s true loves in life was his pitbull named Deebo. “Oh my did he ever love that dog,” said his friend Mario Kulic, who was there when Pamfil had the dog shipped from Detroit to Windsor, Ontario about three years ago. “He was a friendly loving dog.” That’s how many of Pamfil’s friends also describe the 25-year-old, who was shot and killed in his condo complex along Whyte Avenue Tuesday evening along with his beloved dog.”

As if a homicide isn’t bad enough – why did the dog have to die too? So, so sad.

“A new survey suggests fewer Canadians are living from paycheque to paycheque, and more are putting money aside for a rainy day or retirement. But there are still a large number that would face difficulties after one week of not receiving their cheques, and savings rates remain low, the results show.”

Paycheque to paycheque can be rough.

“The Parti Quebecois may have won the Quebec election Tuesday night, but voters did not give Pauline Marois’s minority government the green light to pursue a separation from Canada, Prime Minister Stephen Harper said Thursday.”

“The suspect in a Quebec election night shooting that left one dead and another injured appeared in court Thursday and was arraigned on 16 charges, including murder, attempted murder and explosives charges.”

“Bill Clinton transitioned from political rock star to legendary supernova in forty-eight electrifying minutes on Wednesday night. The former president in his nomination speech for President Barack Obama very likely changed the dynamics of the reelection campaign from blasé to blazing. With folksy mannerisms, wonky statistics and easy charm, Clinton rocked the Democratic National Convention and made Republicans sigh a big “Uh oh.””

“For at least eight hours, the 4-year-old girl lay motionless, frightened and alone, hiding under her dead mother’s skirt on the floor of a BMW after a killing spree in the French Alps. As the hours ticked by, police peered through the car’s windows at the lifeless bodies of her parents and grandmother.”

“Bubble tea — that sweet, tea-based drink filled with giant tapioca balls — may be a hazard to your health. A new German study finds the starchy balls can contain cancer-causing PCBs, a group of of industrial chemicals that have been linked to a long list of health hazards.”

I rarely drink bubble tea (unlike most of my Asian counterparts, lol) and when I do I never get it with the balls (just never really liked the taste!) so I think I’m in the clear, lol. Still… what doesn’t possibly contain cancer-causing chemicals these days?

“Being married can improve a cancer patient’s odds of surviving, new research suggests. In a University of Maryland study, married patients with locally advanced lung cancer were more likely to survive longer after treatment than single patients.”

Getting married next year! ^_^

“Recent news stories have suggested that employers may be reluctant to hire people without a Facebook profile on the grounds that Facebook usage has become so common that not having an account is seen as somehow abnormal… Is there any substance to these concerns? Research suggests that although not having a Facebook account might be unusual nowadays it is hardly cause for alarm. Indeed, the fact that someone has an account is hardly a credential of mental health either, and may be associated with its own problems, admittedly minor ones.”

“Cooperative self-driving cars could nearly triple the capacity of our highways, says a new study on the potential benefits of autonomous vehicles. By working together, cars can travel far more efficiently than if they act on their own. The paper is being presented this week at an Institute of Electrical and Electronics Engineers (IEEE) conference on vehicular technology. Its author, Columbia University’s Patcharinee Tientrakool, wrote her dissertation on a method for cars to communicate safely and reliably that she calls “reliable neighborcast protocol,” or RNP.”

Until they transform and enslave mankind forever! Lol. :)

“In case it wasn’t clear enough with the original Kindle Fire, Amazon’s got Apple’s iPad in its sights. And today Amazon expanded its arsenal. Amazon Chief Executive Jeff Bezos today showed off three new models of the Kindle Fire, dubbed the Kindle Fire HD, that are clearly aimed at wooing those who might buy a tablet from Apple.”

“There is more than a 20 per cent risk of Canada falling into a second recession — and though much of that risk comes from outside our borders, Canadians’ sky high debt loads could push the economy over the edge, warns a new report from Moody’s Analytics. With debt-to-income ratios at an all-time high around 150 per cent, Canadians have stretched themselves to the limit since the recession and have left little head room to buffer against another economic downturn, Moody’s suggests in the report released Thursday.”

20% chance really isn’t that much though, lol.

“Samsung says global sales of its Galaxy S III smartphone have surpassed 20 million in a little more than three months. Samsung Electronics Co. launched the flagship smartphone powered by Google’s Android operating system in Europe in late May. The release schedule was about three months ahead of new phone announcement by rivals Apple, Nokia and Motorola.”

“Imagine there’s a huge nuclear explosion and almost everyone you know is dead. Sure, things are bad. But you can still get a beer. Alex Wellerstein at the Nuclear Secrecy blog has looked into some of the weird shit that the United State’s Nuclear Defense Agency did during the Cold War to better understand the finer points of nuclear attacks. And one of those things was to drop bombs on bottles of beer. Naturally some of them were smashed into oblivion, but those that survived were totally safe to drink. In fact they were described in reports as “still of commercial quality.””

“Scientists say last year’s earthquake in Japan has greatly increased the pressure of the magma chamber underneath Mount Fuji. The volcano last erupted in 1707, less than two months after a large earthquake. That blast scattered ash and cinders as far away as Tokyo, 100 kilometres from the volcano. Experts at Japan’s National Research Institute for Earth Science and Disaster Prevention say there is heightened pressure under Mount Fuji due to last year’s devastating earthquake and aftershocks. The magma chamber is about 15 kilometres underground and it is feared the increase in pressure could trigger an eruption.”

“Tens of thousands of rotting fish are lining a 40-kilometre stretch of shoreline along Lake Erie, reports the provincial environment ministry, which is investigating the cause. A spokesperson for the Ontario Ministry of Environment said Tuesday the kill was reported on the weekend. So far it appears the fish may have died from the affects of a naturally occurring lake inversion rather than a spill, but cautioned the investigation is continuing.”

“The extremely viral YouTube video hit 100 million views, a milestone they’ve managed to reach in just 52 days of its release. According to a study back in May from Visible Measures on the virality of Kony 2012, this makes Gangnam Style the 5th most viral video of all time.”

It’s crazy how this video has blown up! (Sidenote: I used to LOVE K-Pop. Even had a fansite for a Korean boy band, lol. Back in the day).

Lol so easily amused, kittens are. 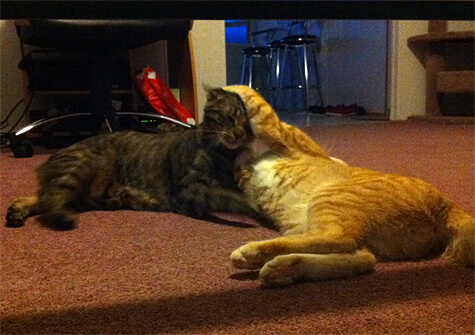 Linda Hoang is a Canadian blogger based in Edmonton, Alberta, who writes about travel, food lifestyle and pet topics. She's also a seasoned social media/digital strategist with a journalism background. Linda loves exploring the world with her husband Mike, eating their way through cities, supporting local businesses, and photographing Instagrammable Walls. She is the founder of the Edmonton International Cat Festival and a fur-mom to two cats and two dogs.
PrevPreviousClicks of the Day: Tuesday, September 4, 2012 Edition!
NextStorify: Reaction to Paul McCartney’s Edmonton concert dateNext