Welcome to Tuesday, September 4 2012’s Clicks of the Day!

“On the morning of the last Friday of each month, something pretty cool happens in our city. Dozens of Edmontonians come together to “nourish their mind and their body.” That’s how Steven Hodges puts it anyway. He’s one of the organizers for Social Media Breakfast Edmonton.”

“RCMP have confirmed that human remains found on a rural property near Leduc on Saturday are those of Amber Alyssa Tuccaro. A group of recreational horseback riders came across what they believed to be a human skull and immediately contacted RCMP. The remains were identified through dental records. Tuccaro has been the subject of an RCMP missing person investigation since her disappearance in August 2010.”

Sad closure for her family.

“The president of the proposed Northern Gateway pipeline defended the $6-billion project Tuesday, saying it is no different than other past mega-projects which ultimately benefit the nation. John Carruthers, president of the Northern Gateway pipelines, addressed the panel reviewing the controversial project in Edmonton. It was the first time representatives from Enbridge addressed the review panel.”

“Edmonton police are touting the efforts of a Good Samaritan, after he took measures to prevent an allegedly distracted driver from colliding with pedestrians last week. According to witness reports, the driver had been talking on his cell phone, and had passed a number of vehicles that were stopped to allow children use a crosswalk on 84 Avenue. As this happened, Darrel Krushelnicki, of Taber, had been leaving the Bonnie Doon Mall parking lot – and noticed the speeding vehicle approaching the pedestrians. Police said Krushelnicki took proactive measures, and drove his Hummer in front of the oncoming vehicle.”

“Alberta senator-in-waiting Doug Black racked up more than $25,000 in expenses in a year-and-a-half as chair of the University of Calgary’s board, according to the Canadian Taxpayers Federation. Black, who was the top vote-getter as a Progressive Conservative candidate in the spring Senate election, had $28,030.88 in expenses between Feb. 2011 and August 2012, according to documents obtained by the CTF through a freedom of information request. Among the expenditures reimbursed by the university are $1,296 for a two-night stay at the Four Seasons hotel in Houston and $1,261 for a two-night stay at Toronto’s Ritz-Carlton. In a news release, CTF Alberta director Scott Hennig noted that U of C policy allows travellers on university business to “standard room rates” and advises them to seek out discount or preferred rates.”

“Parti Quebecois Leader Pauline Marois will become Quebec’s first female premier after her sovereigntist party ended nearly a decade of Liberal rule in a tense election. But while the Liberals clinched official Opposition status, leader Jean Charest lost his own seat in a stunning defeat by a PQ candidate. CTV News has declared a minority PQ government, a result that may alleviate some fears of an impending referendum on Quebec’s independence, which Marois said she would only call under the “right conditions.””

“Canadians’ love affair with television programs remains undiminished, despite the proliferation of new online and wireless platforms that were supposed to threaten traditional media. The CRTC’s new report on the communications industry shows Canadians watched an average of 28.5 hours of TV last year, up 30 minutes from 2010, even though they had more media choices than ever before.”

Me loves my tee-vee.

“The Democratic Party opened its national convention here Tuesday hoping to launch President Obama into the final stretch of his campaign for a second term with the same promise and grassroots energy that he mustered four years ago. But it also opened with a series of sharp attacks against Republican nominee Mitt Romney.”

Nice. Lol. I catch all my convention highlights on the Colbert Show. :)

“Patient after patient asked: Is eating organic food, which costs more, really better for me? Unsure, Stanford University doctors dug through reams of research to find out — and concluded there’s little evidence that going organic is much healthier, citing only a few differences involving pesticides and antibiotics. Eating organic fruits and vegetables can lower exposure to pesticides, including for children — but the amount measured from conventionally grown produce was within safety limits, the researchers reported Monday. Nor did the organic foods prove more nutritious.”

Too rich for my grocery list to begin with.

“It’s looking like Apple’s next version of its iconic smartphone will be called the iPhone 5. On Tuesday, the secretive company sent e-mails to members of the media, inviting them to an “invitation-only event” in San Francisco on Wednesday, September 12. The event is widely expected to be the launch of the next iPhone, but in typically cryptic Apple fashion, the invitation reveals little about what will be announced. The tagline says only, “It’s almost here.””

“Forget information overload. What you’ve got is information just-right-load. That’s the conclusion reached by a trio of researchers at Northwestern University and the University of Michigan, who interviewed 77 people in seven focus groups in an effort to understand the new media consumer’s psyche and ability to adapt to the barrage-of-information age. Contrary to many experts’ warnings that the “always-on” media environment has “overwhelmed” audiences and creating a society of antisocial Facebook-addicts more interested in hashtags than hugs, the study found that participants said they felt “empowered” and “enthusiastic” about the volume of information at their fingertips, not overloaded. ”

Lol. Carry on then!

“The world’s leading fast-food burger chain is opening an all-vegetarian version in India, in hopes of capitalizing on the massive population of non-meat eaters. McDonald’s, perhaps best known for the towering, two-patty Big Mac beef hamburger, will open the vegetarian restaurant next year.”

“Chinese conglomerate Wanda says it has closed on the acquisition of AMC Entertainment Holdings, one of the largest movie theatre chains in the U.S. The US$2.6 billion deal is the largest takeover yet of a U.S. company by a Chinese firm. It also makes Wanda the world’s largest owner of cinemas.”

“The average university tuition in Canada is now more than $5,000. After four years, Statistics Canada says a final bill of almost $60,000 can be expected after including books, housing, and other ancillary expenses. And tuition inflation historically has made the recent spike in food prices seem tepid, so that number might only be going up… Statscan regularly reports on the average Canadian’s debt-to-income ratio, and these days, every time they do, it makes it into the news. Everyone, including me, is finger-wagging about debt. That ratio has recently breached 150 per cent, meaning that for every dollar of after-tax income, we owe more than $1.50 in debt. That debt could be mortgages, vehicle loans, credit cards, lines of credit and, of course, student loans.”

Honestly I would say my debt load isn’t bad at all. Proud to say I’ve paid off my schooling. We have a mortgage but I don’t consider that bad debt. Other than that… just saving for our wedding and the rest of life. #wearedoingokay I credit our frugalness/not going out to the bar all the time/focus on saving/etc. Though I recognize others may not be in the same boat.

“An international team of astronauts will go underground this week, using a Mediterranean cave system to help them prepare for life hundreds of miles above Earth’s surface. The six astronauts, who represent five different space agencies, will descend Friday (Sept. 7) into the caves of Sardinia, off the west coast of Italy. They’ll stay underground for six days during the 2012 run of the European Space Agency-led CAVES project. CAVES, which stands for Cooperative Adventure for Valuing and Exercising human behaviour and performance Skills, aims to help prepare astronauts for long-duration spaceflight by exposing them to situations in which they must work together to solve problems in challenging conditions.”

“Tigers in Nepal seem to be taking night shifts in order to avoid their human neighbours, a study has shown. The big cats generally move around at all times of the day and night, to monitor territory, mate and hunt. But the study of tigers in Chitwan National Park – where humans and tigers walk the same paths – showed a nocturnal shift in activity.”

Definitely for the best. Smart tigers. (I am a firm believer that humans are detrimental to other species and the planet, lol).

“A Russian man wanted to see if his girlfriend really did love him to death – so he faked his own demise in a bizarre proposal. Alexey Bykov, 30, from Omsk, hired a movie director, stuntmen, make-up artists, and even a script writer to stage a bogus car crash. He then arranged to meet girlfriend Irena Kolokov at the crash site so she would be convinced he was dead.”

Dumbest thing I have ever read. Well probably not – there are a lot of dumb people doing dumb things out there but this is pretty dumb, lol. 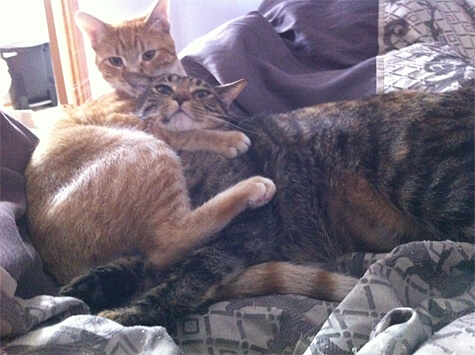 My little rascals play fighting on the bed. :)

Linda Hoang is a Canadian blogger based in Edmonton, Alberta, who writes about travel, food, lifestyle and pet topics. She's also a seasoned social media/digital strategist with a journalism background, the founder of the Edmonton International Cat Festival and co-founder of Stop Race Based Hate, an online anti-racism education tool. Linda loves exploring the world with her partner Mike, eating their way through cities, supporting local businesses, and photographing Instagrammable Walls. Linda is a fur-mom to two cats and two dogs.
PrevPreviousReview: Three Boars Eatery
NextClicks of the Day: Thursday, September 6, 2012 Edition!Next