“The proposed law would amend the Criminal Code to allow for harsher sentences if there was evidence an offence had significant impact on the victims due to their age. Statistics Canada data shows over 2,400 seniors reported violent crimes by a family member to police in 2009. Family violence accounted for one-third of all violence incidents committed against older adults.”

“A symphony of smashing, spray-painting and projectile-tossing played out Thursday in downtown Montreal during the city’s notoriously raucous annual anti-police march. Protesters lobbed objects at officers, vandalized some stores and smashed two police vehicles. Authorities responded by firing off chemical irritants in a bid to disperse a crowd of about 1,000 people.”

“Police are warning people to be on the lookout for a thief who has been running off with Good Samaritan’s cellphones. Seven times in the last week, trusting strangers have been duped by a young man who has asked if he could call a tow truck — then dashed off with their phones in tow.”

People can be sooo shady.

“With 20 days below -20 C, Edmonton has only had half its normal share this winter, Philips said. And its total snowfall is only a fraction of last winter, when 160 centimetres fell from November through April… ‘People in Edmonton feel as if they have almost cheated winter,’ Phillips said, adding that it has been the second warmest on record. “Across the prairies, winter has been almost non-existent.'”

Lol. This has personally been my most favourite winter.

“An academic analysis of surveys spanning more than 40 years has found that today’s young Americans are less interested in the environment and in conserving resources — and often less civic-minded overall — than their elders were when they were young. The findings go against the widespread belief that environmental issues have hit home with today’s young adults, known as Millennials, who have grown up amid climate change discussion and the mantra “reduce, reuse, recycle.” The environment is often listed among top concerns of young voters.”

We should be caring about the environment… haven’t you seen The Lorax? lol. But seriously. I wonder if anything we even do now can really change the fact mankind has royally screwed this planet.

“As concerns have mounted over the information collected by mobile apps, Apple has been forced to defend its policies to lawmakers. Reps. Henry Waxman (D-Calif.) and G.K. Butterfield (D-N.C.) sent a letter to Apple CEO Tim Cook last month asking for clarification on the company’s privacy policies concerning the data that apps can collect… But Apple’s response didn’t satisfy the lawmakers. Waxman and Butterfield said that ‘the March 2 reply we received from Apple does not answer a number of the questions we raised about the company’s efforts to protect the privacy and security of its mobile device users.'”

“According to a customer, Comcast double-billed its e-bill-using customers. When the company realized its mistake, it then charged them for reversing it.”

“Whittaker, who joined Google in 2009 and left last month, described a corporate culture clearly divided into two eras: “Before Google+,” and “After.”
“After” is pretty terrible, in his view.”

“Twitter users place the most faith in items retweeted by someone they trust, according to recent research, a finding that should make journalists and other influencers cautious about passing along suspect information… If you want your tweets to be believed, focus on firming up your Twitter account’s bona fides. Get your profile picture in shape, use proper grammar, establish a history of tweeting on key topics, and aim to have others retweet you. Of course a retweet carries your message to more people, but now we also know the retweet can impart even more credibility.”

Including “the 9 to 5 work day & lunch breaks” – “blockbuster & other video rentals tores” “pen pals” and more!

“A study by Symantec suggests that when people find smartphones, most look at the pictures and almost half open the banking apps. That’s people for you.”

Lol wow. I can understand looking at pictures but banking apps? Come on, people!

“Several endangered black-footed cats have been born recently in the U.S. and researchers say Crystal’s birth is the rarest — the first ever born from an embryo fertilized in a lab dish, frozen, and later implanted in a housecat’s womb. The black-footed cat is Africa’s smallest wildcat and one of the world’s smallest felines — smaller even than a domestic cat.”

Such a cute kitty… and yes it’s great we’re helping the population of an endangered animal but… ugh. Too ‘playing God’ for me. Stop it, scientists.

“The standard story on the origin of mammals holds that our ancient forebears didn’t creep out of the evolutionary shadows until after the demise of dinosaurs. But researchers at the University of Washington have discovered that one class of rodentlike creatures was booming long before an asteroid slammed into the Earth and put an end to the age of giant reptiles. The animals Wilson and his colleagues studied have such a difficult name – multituberculates – that even experts call them “multis” for short. They’re also referred to as the lost tribe of mammals, because they died out 35 million years ago and have no living relatives. But during a heyday that lasted nearly 100 million years, multis were the most abundant mammals on Earth.”

“University of Cambridge researchers have captured stunning microscopic footage of how killer T cells (a type of white blood cell) can protect the body from pathogens. The video shows a T cell hunting down a cancer cell and engulfing it. Cytotoxic T cells are just 10 microns in length, approximately one-tenth the width of a human hair. The actual action has been sped up and appears 92 times faster in the video.”

“Anxiety, depression or sometimes-profound personality changes. Despite new awareness around concussions, less talked about is the impact on a person’s psyche. Too often public discussions around concussions focus on the physical fallout, he said — headache, dizziness, nausea and other post-concussive symptoms. Missing is the “psychiatric sequelae” of brain injury.”

“Willow Tufano saved up money for a year and half by selling items on Craigslist. The 14-year-old scraped together enough to invest in a rental property. She went halfsies with her mother on a $12,000 short-sell home in Port Charlotte, Fla. The tropical American state was hard hit in the 2008 housing crash, which means there are a number of great deals on home through short sells from banks trying to make back some of their money loaned to homeowners who couldn’t afford their mortgages.”

Wow good for her.

“”South Park,” a cartoon that is and isn’t about four little boys in a Rocky Mountain hamlet, begins its 16th season Wednesday on Comedy Central. Sixteen years of “South Park — it began so long ago that Patrick Duffy was the subject of a joke in its second episode — sounds even more amazing than 23 years of “The Simpsons,” given the younger show’s habitual profanity, vulgarity and violence. But that is also obviously part of its appeal and, indeed, often its very point.”

That is quite the milestone!

“This is a series that is wildly inventive, and not just by the standards of a half-hour comedy. Every episode about the study group at Greendale Community College involves some sort of conceptual high-mindedness: alternate timelines, stop-motion animation, elaborate parodies of Apollo 13 and Hearts of Darkness, a sprawling blanket fort, a post-apocalyptic paintball battle.” 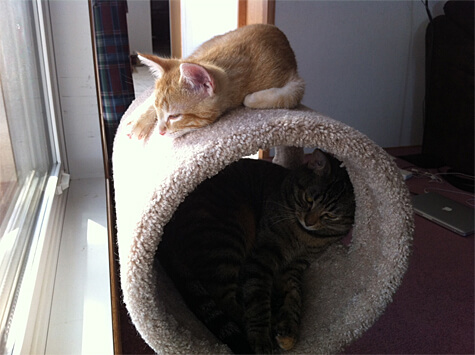 Linda Hoang is a Canadian blogger based in Edmonton, Alberta, who writes about travel, food lifestyle and pet topics. She's also a seasoned social media/digital strategist with a journalism background. Linda loves exploring the world with her husband Mike, eating their way through cities, supporting local businesses, and photographing Instagrammable Walls. She is the founder of the Edmonton International Cat Festival and a fur-mom to two cats and two dogs.
PrevPreviousClicks of the Day: Wednesday, March 14, 2012 Edition!
NextReview: KyotoNext