“Since 2001, OSISS has helped more than 6,500 people deal with PTSD… Now Global News has learned plans for such a program have been abandoned.”

Sounds like a great program that definitely shouldn’t be abandoned…

Hooray for government intervention ? (I learned not to fly Air Canada long, long ago).

“The American soldier accused of shooting 16 Afghan villagers in a pre-dawn killing spree was flown out of Afghanistan on Wednesday to an undisclosed location, even as many Afghans called for him to face justice in their country. The U.S. military said the transfer did not preclude the possibility of trying the case in Afghanistan, and Defence Secretary Leon Panetta has said the soldier could receive capital punishment if convicted. Many fear a misstep by the U.S. military in handling the case could ignite a firestorm in Afghanistan that would shatter already tense relations between the two countries.”

“The human-sized wooden abstract pieces add a playful air to a stretch of road perhaps best known for thrift stores and pawnshops. Nearly 50 pieces line the road and/or are inside businesses between 149th and 156th streets.”

Pretty. I hope they aren’t vandalized or stolen, lol.

“More people in India have cellphones than have toilets… the survey found that 63.2 per cent of households said they had a telephone connection – that’s up from 9.1 per cent a decade ago, and the increase is due almost entirely to the rise in cellphone ownership. However only 53.1 per cent of Indian households have access to a toilet – either one in their own home or in a shared toilet block. Less than one in three rural Indians has access to a toilet.”

“Ottawa moved Wednesday to level the wireless playing field by placing limits on the coming wireless spectrum auction and lifting foreign-investment limits on small telecom firms in an effort to boost competition.”

Excellent. Hope this helps the wireless industry here. Maybe our max contracts will be reduced to just 2 years? #wishfulthinking

“The book-form of Encyclopaedia Britannica has been in print since it was first published in Edinburgh, Scotland, in 1768. It will stop being available when the current stock runs out, the company said. The Chicago-based company will continue to offer digital versions of the encyclopedia. Officials said the end of the printed, 32-volume set has been foreseen for some time. ‘This has nothing to do with Wikipedia or Google,’ Encyclopaedia Britannica Inc. President Jorge Cauz said. ‘This has to do with the fact that now Britannica sells its digital products to a large number of people.'”

I’m sure Wikipedia and Google had SOMETHING to do with the decision ;)

“For reasons unknown at the moment, the famous and perhaps infamous hacker group Anonymous has just released its own OS. As described on Source Forge, ‘Anonymous-OS Live is an ubuntu-based distribution and created for educational purposes, to checking the security of web pages.'”

“The remains of what may be a previously unknown human species have been identified in southern China. The bones, which represent at least five individuals, have been dated to between 11,500 and 14,500 years ago.”

“Scientists in Asia have announced plans to recreate the giant creature that stomped around the Earth some 4,500 years ago. On Tuesday, scientist Hwang Woo-suk of South Korea’s Sooam Biotech Research Foundation signed an agreement with Vasily Vasiliev of Russia’s North-Eastern Federal University to clone a mammoth, AFP reports.”

“A 3-year-old boy shot and killed himself with a gun he found in a car as a family made a stop early Wednesday at a gas station, police said.”

“Cloud-based service, Incapsula, has revealed research indicating that 51 per cent of website traffic is through automated software programs; with many programmed for the intent of malicious activity.”

“It takes less than two-tenths of a second for an online visitor to form a first opinion of your brand once they’ve perused your company’s website, according to researchers at the Missouri University of Science and Technology. And it takes just another 2.6 seconds for that viewer’s eyes to concentrate in a way that reinforces that first impression.”

Which reminds me – I want to change up the layout on this website!!

“Pinterest is now one of the most efficient traffic sources, in some cases even surpassing networks like Twitter. Naturally, a lot of social media marketers are embracing Pinterest to increase social media reach and to drive traffic to their sites.”

Cool tips. Useful for companies for sure. Content from my site that’s been pinned? 4 – all cat photos – pinned by me. LOL :)

“At any point in the day, at least one person writes a Tweet that includes the exact time. By tapping into this stream of morning wakeup times, bus schedules, calls to prayer, ETAs, “OMG, it’s already [time]!” and other time-related tweets, a new site called Chirpclock has created a clock that posts time using tweets.”

“Fatty diets may be associated with reduced semen quality, according to a study published Wednesday in the European reproductive medicine journal Human Reproduction.”

Basically fatty diets cause a lot of problems.

“Brain scans of Nasa astronauts who have returned to Earth after more than a month in space have revealed potentially serious abnormalities that could jeopardise the future of long-term space missions. Doctors examined 27 astronauts who had flown long-duration missions with the US space agency and found a pattern of deformities in their eyeballs, optic nerves and pituitary glands that remains unexplained.”

“Look up on any clear night this month and the dominant bright objects besides the moon will be our neighbouring planets. Since late-February, the evening skies have been graced by a great lineup of the five classical naked-eye planets – Mercury, Venus, Mars, Jupiter and Saturn… Weather permitting, you can track the movements of the brightest worlds – Venus and Jupiter – night to night, as they converge and change places with each other in a gravitational dance over the coming weeks. The main event will be March 14 and March 15, when the two worlds will come closest together in the sky.”

Sounds pretty. Will have to look up this month (hopefully tomorrow to catch the ‘main event’).

“This is a great excuse to bake pies… But there are also lots of reasons to celebrate this number: Pi appears in the search for other planets, in the way that DNA folds, in science at the world’s most powerful particle collider, and in many other fields of science.”

“It looks like renowned physicist Stephen Hawking has a new gig. Hawking is scheduled to make a cameo appearance on the hit CBS sitcom, ‘Big Bang Theory’.
According to the Hollywood Reporter, Stephen Hawking will guest star on the Apr. 5 episode.”

Hooray. The Big Bang Theory is a great show.

“More and more, restaurants are requiring credit cards before allowing customers to make a dinner reservation, and they’ll charge you, and possibly say nasty things about you on Twitter, if you fail to show up… Besides charging no-shows, some restaurants are also trying to shame them—or perhaps just vent a little. In the same way that diners who’ve had a lousy meal or awful service will immediately post their thoughts on Twitter, Facebook, TripAdvisor, or Yelp, some restaurant staff are turning to social media to out no-show diners. At other restaurants, managers will call up customers and ask for an explanation about why they were no-shows.”

“Whether you’re a foodie or a traveler who just loves to eat, you’ll find much to savor and sample in our top 10 foodie destinations around the world” including “Vancouver, Tuscany, Brussels” and more!

I would love to just travel and eat! Lol. Spoken like a true piggy.

“The mayor of a small Italian town has banned the residents from dying due to an ongoing feud with the neighboring town which houses the only cemetery. Unfortunately two elderly residents have disobeyed the mayor’s decree and died.” 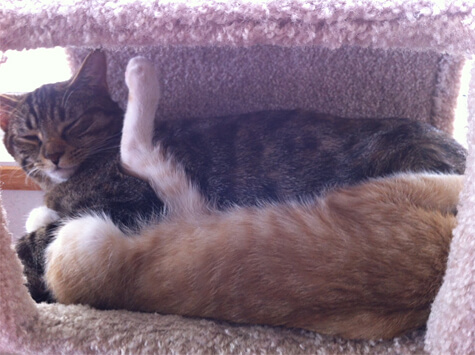 Linda Hoang is a Canadian blogger based in Edmonton, Alberta, who writes about travel, food lifestyle and pet topics. She's also a seasoned social media/digital strategist with a journalism background. Linda loves exploring the world with her husband Mike, eating their way through cities, supporting local businesses, and photographing Instagrammable Walls. She is the founder of the Edmonton International Cat Festival and a fur-mom to two cats and two dogs.
PrevPreviousClicks of the Day: Tuesday, March 13, 2012 Edition!
NextClicks of the Day: Thursday, March 15, 2012 Edition!Next