“Enbridge will get the chance to address the review panel for the Northern Gateway Pipeline for the first time on Tuesday, as the next phase of hearings for the project resume in Edmonton. The Calgary-based company is hoping to move forward with construction of a $5.5 billion pipeline that would carry more than half a million barrels of crude oil 1,200 kilometres from Alberta to Kitimat, B.C., where it would then be shipped to Asian markets.”

A spill would just be devastating. :(

“The end of the summer holidays was marked in a special way in Fort Saskatchewan on Monday – as dozens of sheep made their way through the downtown as part of the city’s annual end-of-summer parade. Every summer for the last 20 years, sheep graze in Legacy Park in Fort Saskatchewan. It began as an economical and environmentally-friendly way to keep the grass mowed – and has since become a unique feature to the city.”

“The roads will be busy and transit system bustling Tuesday morning as tens of thousands of students shake off the summer cobwebs and set off for their first day of school. And that means everyone — yes, you too — needs to pay extra attention as people adjust to the fall routine and all the extra congestion, excited children and distractions that come with back to school.”

“Candidates in Quebec are making a final attempt to appeal to voters on the last full day of election campaigning before polling stations open Tuesday. Recent polls suggest that, in the tight race for Quebec’s top job, current Premier Jean Charest’s Liberals are in third while the pro-sovereignty Parti Quebecois leads the way.”

“It started with fever, fatigue, diarrhea and loss of appetite. But for two farmers in northwestern Missouri, the severe illness that followed a tick bite led epidemiologists on a journey to a new viral discovery. “It’s brand new to the world,” said William Nicholson with the National Center for Emerging and Zoonotic Infectious Disease at the U.S. Centers for Disease Control and Prevention. “It’s unique in that it’s never been found elsewhere and it is the first phlebovirus found to cause illness in humans in the Western Hemisphere.””

“Women who smoke in pregnancy could be putting their children at greater risk of being fat as teenagers, warn researchers. They fear that smoking leads to subtle structural variations in the growing brain of the unborn baby that create a preference for eating fatty foods”

I don’t smoke and I hate the smell of smoke – so my babies should turn out okay based on that! Lol. :)

“Gene therapy has been used to give mice born without a sense of smell the ability to sniff their surroundings, an international team of researchers say. The mice had a genetic disease which affected microscopic hairs in their body – called cilia – which can detect chemicals in the air. Researchers hope their findings will lead to treatments for diseased cilia, which can cause blindness, deafness and kidney disease in people.”

“A group of scientists have developed a quantum computer chip that could lead to ultra-fast computer processors, which would outperform those found in today’s standard electronics and smartphones.”

“Students are hooking up more and more with wireless companies in the back-to-school season, making this period a key time for buying cellphones. New smartphones are usually launched at this time along with plenty of deals as back-to-school starts to rival the holiday shopping season for cellphone sales, say analysts and wireless providers.”

“The Hollywood action hero is said to be considering legal action against technology giant Apple over his desire to leave his digital music collection to his daughters. If he succeeds, he could benefit not just himself and his family but the millions who have purchased songs from Apple’s iTunes Store.”

Weird. Who my music collection goes to has never, ever been a thought that’s crossed my mind when I mull over will-estate-type of things, lol.

“The last decade saw the end of cheap oil, the magic growth ingredient for the global economy after the second world war. This summer’s increase in maize, wheat and soya bean prices – the third spike in the past five years – suggests the era of cheap food is also over. Price increases in both oil and food provide textbook examples of market forces. Rapid expansion in the big emerging markets, especially China, has led to an increase in demand at a time when there have been supply constraints. For crude, these have included the war in Iraq, the embargo imposed on Iran, and the fact that some of the older fields are starting to run dry before new sources of crude are opened up.”

“The spider tortoise – one of the rarest tortoises in the world – is the equivalent of a microwave meal for the Mikea, a hardy Madagascan forest tribe. The method is simple: bury tortoise in heated sand, wait 20 minutes, slurp superheated innards.”

“Earth’s biodiversity generally increases as temperatures rise over the long term, but rapid global warming is expected to have the opposite effect, according to scientists. The increase in the number of species depends on the evolution of new plants and animals over millions of years, research found. The current speed of change is expected to cause diversity loss.”

“You think you’re man enough to watch an hour of the cast of ‘Friends’ screwing up their lines and messing around? Let’s find out.”

I may watch all of this tonight. Lol. But for the record I have seen all of these as I own all of the Friends DVDs!!

“Marvel’s The Avengers has passed the $1.5 billion milestone worldwide, after an extra push at cinemas over the US Labor Day holiday weekend.” 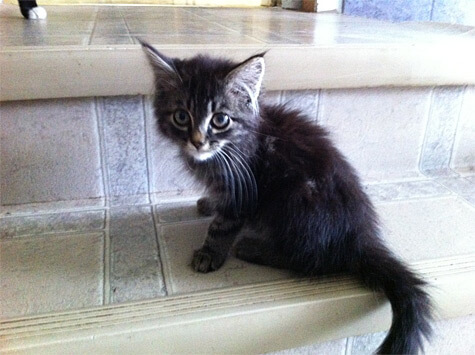 This isn’t a Thor or Loki Photo of the Day but I wanted to post this adorable photo of YODA! She’s a kitty that Mike’s parents rescued and Mike’s sister may adopt her. She is precious! And like Thor, has a male-gendered name, lol.