“Rainy weather didn’t stop a massive celebration from taking place at the Alberta Legislature grounds Sunday. Hundreds came out for the celebration – despite the wet and windy forecast – to take part in the 100th anniversary party for the legislature building.”

Looks like a lot of fun – I would have gone if I hadn’t been working! :)

“Stiffer penalties are in store for Alberta motorists who are caught driving while impaired on the province’s roads. The new penalties kicked in Saturday, specifically aimed at drivers who are found to have a Blood Alcohol Content (BAC) that’s lower than the legal limit of .08, but above .05 – which provincial officials consider unsafe.”

“It’s just another task in a large pile of complaints to Alberta’s so-called rat patrol after a herd of the pesky rodents were found in a Medicine Hat landfill last month. “We have certainly seen a spike in calls and 95% of them are not considered to be rats,” said Phil Merrill, the province’s rat and pest specialist who believes Charlie’s find was a pocket gopher.”

“Quebec police are on the hunt for a sticky-fingered thief after millions of dollars of maple syrup vanished from a Quebec warehouse. About 10 million pounds of syrup was stored at the site, at a value of more than $30-million.”

“Legionnaires’ disease has claimed another life in Quebec, bringing the total number of deaths linked to the latest outbreak of the infection-causing bacteria to 11. Since the outbreak began in mid-July, public health officials have confirmed 169 cases of legionnaires’, four of which were detected on Sunday. However, officials believe the outbreak is now under control.”

“Two activist groups said Sunday that about 5,000 people were killed in Syria’s escalating civil war in August while the UN children’s fund UNICEF put the death toll for last week alone at 1,600. They were the highest figures reported since the uprising began more than 17 months ago.”

This is so bad.

“Fancy a chocolate bar? Regularly indulging in the snack may actually help men decrease their risk of having a stroke, a Swedish study suggests. Researchers writing in the journal Neurology found that of more than 37,000 men followed for a decade, those who ate the most chocolate – typically the equivalent of one-third of a cup of chocolate chips – had a 17-per-cent lower risk of stroke than men who avoided chocolate.”

Good news for many sweet-toothed men I’m sure! (When will a study confirm that chips are actually healthy for you? Lol).

“Facebook has beefed up its systems to automatically delete suspicious Likes on a Page and ensure that only real users and brands can authentically connect to the Pages they care about.”

“According to Chef Cui Runquan, young people in China no longer want to take jobs as noodle shavers, so he created the “Chef Cui” robot to handle the slicing duty in noodle shops. Now, he has an entire army of Ultraman-ish robot slicers, and they look poised for a delicious robot uprising.”

They really could have made the robots look friendlier… lol.

“An eye-controlled television has been unveiled at Berlin’s IFA trade show. Haier’s Gaze TV uses technology developed by Tobii, a Swedish firm which already offers eye-tracking technology for computers. Users control the set by staring at the top or bottom of the screen to activate a user-interface. The user can then change the volume, switch channel or carry out other functions by looking at icons shown on the display.”

THE FUTURE IS HERE!

“Google Inc Chief Executive Larry Page and Apple CEO Tim Cook have been conducting behind-the-scenes talks about a range of intellectual property matters, including the mobile patent disputes between the companies, people familiar with the matter said. The two executives had a phone conversation last week, the sources said. Discussions involving lower-level officials of the two companies are also ongoing.”

“Poor and rich people respond in two contrasting manner towards victims of crisis or natural disasters according to a study by the University of California-Berkeley. According to the study while poor people during the times of crisis or natural disasters, poor people reach out to each other but rich and wealthy remain oblivious to the plight of sufferers, lost in their world of comfort and material possession. “In times of uncertainty, we see a dramatic polarisation, with the rich more focused on holding onto and attaining wealth and the poor spending more time with friends and loved ones.”

Ah to be rich eh.

“Some birds, it seems, hold funerals for their dead. When western scrub jays encounter a dead bird, they call out to one another and stop foraging. The jays then often fly down to the dead body and gather around it, scientists have discovered. The behaviour may have evolved to warn other birds of nearby danger, report researchers in California, who have published the findings in the journal Animal Behaviour.”

“If you think Electrolux only makes vacuum cleaners, then have we got a meal for you. The Swedish manufacturer has recruited a rotating roster of the great chefs of Europe to create four-course lunches and eight-course dinners using its high-end home-kitchen appliances in an unprecedented setting: a custom-made, glass-enclosed kitchen and dining room called The Cube that’s perched atop Stockholm’s Royal Opera House, London’s Royal Festival Hall, and, previously, Brussels’s Parc du Cinquantenaire and overlooking Milan’s Il Duomo Cathedral. Eighteen people at a time pay roughly $400 a person for the privilege of a remarkable gastronomic and architectural experience in a futuristic dining room with breathtaking views.”

“A letter that lists a “white graduates only” party as one of the activities planned for a class reunion has sparked outrage after it was leaked online. For nearly 40 years, graduates from the St. Martinville, La., Senior High School Class of 1973 have been holding racially segregated class reunions. But this year, ABC affiliate KATC reports that the graduates decided to change that tradition, making the reunion a non-segregated affair. However, a letter announcing the change included an after party for “white graduates only.””

“While his fellow film school students dreamed of being the next Scorsese, Will Braden’s artistic vision took a furry twist: “I wanted to pretend to be a depressed French cat online.” Six years later, the Seattle man has parlayed that dream into a series of videos starring an elegant tuxedo puss named Henri, booming merch sales and a book deal with Random House. Making cat videos is now Braden’s full-time job. Many attendees brought cats — or facsimiles, like Jeanne Morales, of Minneapolis, who shows off her cat purse. More than 10,000 attended. And unlike those budding Scorseses in film school, Braden didn’t have to wait long for his Oscar: on Thursday night, in front of more than 10,000 fans at the first Internet Cat Video Film Festival, the filmmaker accepted the Golden Kitty People’s Choice Award for his two-minute opus Henri 2: Paw de Deux.”

Exactly as cute as it sounds! AWWWW!! 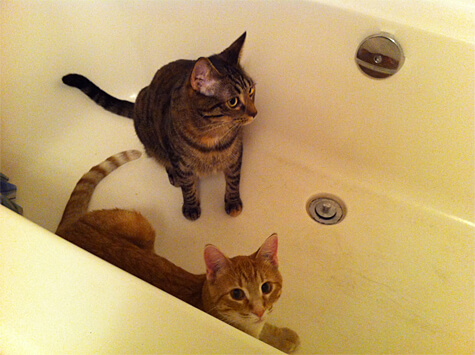 “What we’re not doing anything suspicious” – they say, lol.

Linda Hoang is a Canadian blogger based in Edmonton, Alberta, who writes about travel, food, lifestyle and pet topics. She's also a seasoned social media/digital strategist with a journalism background, the founder of the Edmonton International Cat Festival and co-founder of Stop Race Based Hate, an online anti-racism education tool. Linda loves exploring the world with her partner Mike, eating their way through cities, supporting local businesses, and photographing Instagrammable Walls. Linda is a fur-mom to two cats and two dogs.
PrevPreviousNews Online: Changes to program serving high-risk youth raises concerns
NextClicks of the Day: Monday, September 3, 2012 Edition!Next