“It’s a reality that brings national challenges when it comes to retirement income, health care and housing, but it will also play out at the community level, where finding solutions will be a unique journey… An investigation by Global News has found that the search for solutions will be more pressing for some communities, which are home to a disproportionately high number of seniors. Surviving a tidal wave of seniors is not assured for all communities. Some are at risk of literally dying off with their populations.”

Interesting report – part one of a three part Global News look at Canadian communities and an aging population.

“While their numbers weren’t particularly massive, Canadians across the country gathered Sunday to voice their doubts in the electoral process as the robocalls scandal continues to unfold. The rally was part of dozens of events planned nationwide as allegations continue to swirl that fraudulent phone calls were made to voters in dozens of ridings redirecting them to the wrong polling stations in last year’s federal election.”

Unrest with our government.

“NATO troops in Afghanistan are on high alert after the Taliban vowed to avenge the deaths of 16 innocent civilians – including nine children and three women – who were shot and killed by a rogue U.S. soldier who opened fire after suffering a ‘mental breakdown’ early Sunday morning.”

“Tobacco companies embroiled in a historic civil suit kicked off the trial Monday by arguing that smokers who get sick or can’t kick the habit have nobody to blame but themselves. The landmark class-action case, with up to $27 billion at stake, kicked off in a Montreal courtroom where Canada’s three biggest cigarette companies began their battle against a group representing all of Quebec’s 1.8 million smokers.”

That’s quite a case.

“B.C. coastline could face annihilation by tsunami… A monster earthquake rival-ling the one that devastated Japan last March is all but a certainty on North America’s Pacific coast.”

“The Canada Revenue Agency is warning Canadians to be aware of emails circulating during tax season, as they may be part of a phishing scam… The emails look official, and will often link to a website that will appear similar to the website of a legitimate business, bank or government department… ‘The CRA does not use email to send information about refunds or payment benefits, and will not ask for personal information through email.'”

Sad thing is there’s sure to be people to fall for this.

“The average hourly wage for Chinese manufacturing workers is less than a tenth that of their average U.S. counterparts, according to the Bureau of Labor Statistics. It being about twice as cheap to live in China, those lower Chinese wages go further. But Chinese factory workers also tend to work longer hours, making them more appealing to some employers… So how does the global workforce differ?”

“One way that corporations prevent negative information about their products from getting out is by harassing scientists and the journals that publish them… Corporations also form front organizations to hide their efforts to undermine science. That’s what happened when producers of unhealthy food got together to cast doubt on the FDA’s recommended health guidelines… Sometimes corporations just go for it and buy off legit organizations, as Coca Cola did when they appear to have paid dentists to stop saying kids shouldn’t drink Coke.”

Wow. And yet, unsurprising. Corruption is eveeeerywhere.

“The lawsuit, backed by the American Civil Liberties Union, was brought after a middle school student was forced to give her passwords to her school. The suit is being brought on the grounds that the young girl’s right to free speech under the First Amendment and her right to be free from unreasonable search and seizure under the Fourth Amendment had been violated.”

Good for this girl for standing up for her rights.

“Yahoo has filed a patent infringement lawsuit against Facebook, essentially arguing that the social network misappropriated most of the technologies that have helped turn it into a multi-billion dollar sensation. “For much of the technology upon which Facebook is based, Yahoo got there first and was therefore granted patents by the Unite States Patent Office to protect those innovations,” according to the Yahoo filing.”

“Studies in mice show the compound to be effective in fighting, amongst others, cancers of the colon, lung, breast, prostate, pancreas and blood.”

“‘The Monday and Tuesday after moving the clocks ahead one hour in March is associated with a 10 percent increase in the risk of having a heart attack,’ says UAB Associate Professor Martin Young, Ph.D., in the Division of Cardiovascular Disease. ‘The opposite is true when falling back in October. This risk decreases by about 10 percent.'”

“Call it a sixth sense, a special connection, or just plain mystery. But whatever gift cats and dogs have that allows them to detect health conditions in their owners sure has been saving a lot of lives. Wendy Humphreys, a mother of two from Britain, found out first-hand how powerful that gift can be when her cat Fidge sniffed out a potentially fatal health condition that even doctors hadn’t detected, the Daily Mail reports.”

“A 10-year study at the University of Minnesota Stroke Center found that cat owners were 40 per cent less likely to have heart attacks than non-cat owners. Could a cat’s purr be the reason?”

So if I have two cats perhaps I am 80 per cent less likely to have a heart attack! Lol.

“For McBain, yoga is about creating balance in the body by developing strength and flexibility through poses or postures. He says one of the most liberating things about it is letting go of ego and accepting that no one is better than anyone else. Naked yoga helps people do that because no one is wearing $400 Lululemon yoga clothes or $15 Zellers exercise wear that says they’re not the same. And, he adds, because bodies are not hidden under baggy clothes, he is more easily able to correct people’s poses.”

Sounds like there’s good benefits but I would never be able to do naked yoga, yikes.

“A couple took on a unique and creative project they posted on YouTube. They documented the woman’s pregnancy in a time-lapse series that showed the growth of her belly over the nine-month period of her pregnancy, and finally birth of a baby girl.”

This is an unbelievably cool video. So creative. Great music too.

“A cat calls for the elevator and then calmly rides to the second floor.”

Hahahaa!!!! Thor fetches balls too, but it’s the panting and mouth gaping look of this cat that clinches the dog resemblance, lol. 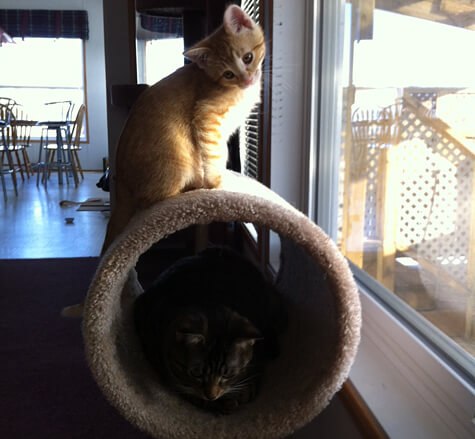 Linda Hoang is a Canadian blogger based in Edmonton, Alberta, who writes about travel, food lifestyle and pet topics. She's also a seasoned social media/digital strategist with a journalism background. Linda loves exploring the world with her husband Mike, eating their way through cities, supporting local businesses, and photographing Instagrammable Walls. She is the founder of the Edmonton International Cat Festival and a fur-mom to two cats and two dogs.
PrevPreviousAttention Foodies: Eat Alberta 2012
NextRecap: Storage Wars EdmontonNext