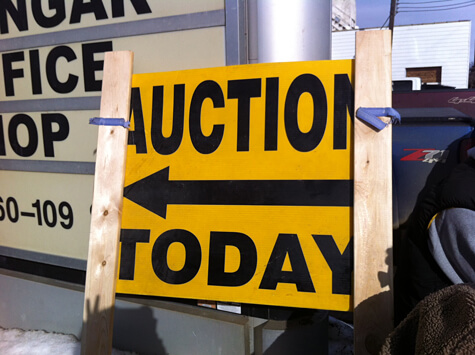 Over the weekend Mike and I went with his dad and grandma to Edmonton’s own version of a Storage Wars Auction!

Notes: Filmed on an iPhone 4S.

It was put on by Kastner Auctions. Mike’s family goes to a lot of Kastner auctions so they have had this Storage Wars event marked on their calendar for awhile. They were very excited about it and apparently so was half of Edmonton. 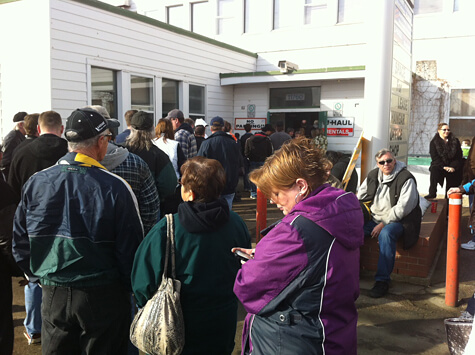 Huge turnout at Storage Wars put on by Kastner Auctions

Lol, just kidding but there was a LOT of people at this auction! Definitely in the hundreds.

I imagine the popularity surged after the wildly successful Storage Wars show which I have still yet to actually watch, but am told is awesome.

The line-up for the auction registration was massive and not everyone even ended up getting to register because the Kastner crew wanted to keep everything on time and it definitely would have started late if they waited to register everyone in line. They ended up saying if someone did bid and win and wasn’t registered yet, then they’d register on the spot.

The whole event felt really poorly organized. Mike’s dad said Kastner has never done an auction quite like this before and I don’t think anyone could have predicted just how many people were going to show up so you can’t really blame them. But everything definitely moved at a slow pace and the space to get to and view the storage units were very crammed. The phrase packed like sardines comes to mind. 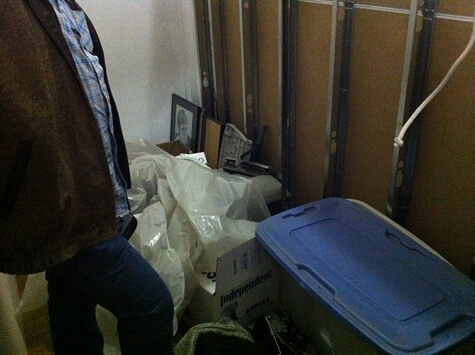 The first storage unit held – well – garbage. Really. Everyone was so unimpressed after slowly shuffling through to check it out and then shuffling away angrily muttering over the plastic wrap and random box held in the storage unit. Not the best unit to kick off the auction but despite this, the unit sold for $175. Unbelievable. There is no way the stuff in there could re-sell for $175, lol. 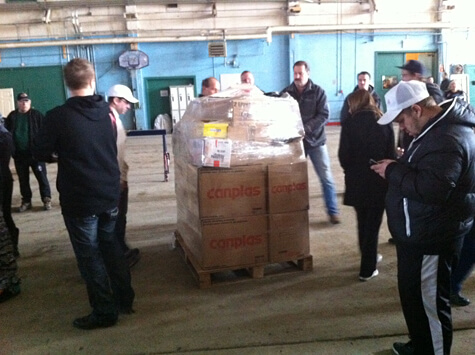 The second item up for bid wasn’t even in a storage unit, it was a pile of boxes stacked on top of one another, wrapped together. You could only really see what was on top (which to me didn’t look worth my money) – but it felt a bit more exciting than the first unit. The wrapped up boxes sold for $300. 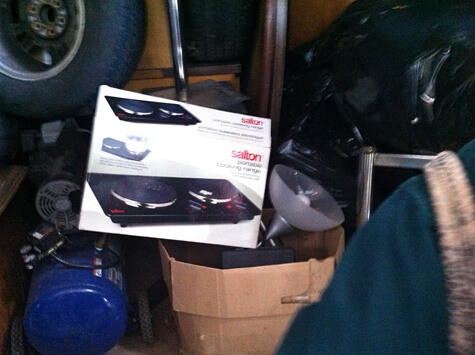 The third storage unit was the most packed we’d seen yet but in my eyes, again, just looked like garbage. Not the case for others attending this auction! All of the tires and random whatever was in there sold for $800!! Maybe I would be less shocked about people spending this much money for what could really most realistically just end up being junk – if I had ever watched Storage Wars but since I’ve never – I was honestly flabbergasted that people were dropping this much cash for the contents of these units.

Unfortunately the third storage unit was the last I was able to look at before I had to leave for work but Mike and his dad got a look at the fourth unit and said it looked to be the best one: 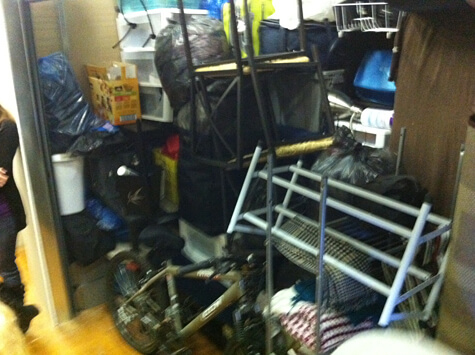 Not sure how much this sold for, but it was the fourth unit at Storage Wars put on by Kastner Auctions

Mike’s dad even said he would have been willing to bid at least $500 for it. They didn’t stay to bid however, because they wanted to get an early start heading to the south side auction location and let’s be honest, there were SO many people at that auction there’s no way their $500 bid would have won. Especially if the last one sold for $800.

I apologize for the fairly blurry, fairly poorly composed photographs of the units. Like I said, the space getting to and from the units and amount of time allowed to view them were very limited. Plus there were just way too many people in the way to get any really good shots.

Despite being poorly organized, overall attending a Storage War auction is actually a lot of fun and really interesting! I would never in my life bid any money on any of that stuff (lol) but I can understand why people would (even though I still think it’s a waste of money). But the Kastner people were very friendly and once you got over the fact that there were so many people there and walking space was so small, it really does turn into a fun event.

I’m going to have to check out a Storage Wars episode now to compare! ;)

So have you seen the Storage Wars show? Been to a Storage Wars auction? Would you ever bid on stuff that could very well be junk (but could end up being a goldmine)? Let me know!

Be sure to watch my video of the Storage Wars Auction! ;)

Linda Hoang is a Canadian blogger based in Edmonton, Alberta, who writes about travel, food, lifestyle and pet topics. She's also a seasoned social media/digital strategist with a journalism background, the founder of the Edmonton International Cat Festival and co-founder of Stop Race Based Hate, an online anti-racism education tool. Linda loves exploring the world with her partner Mike, eating their way through cities, supporting local businesses, and photographing Instagrammable Walls. Linda is a fur-mom to two cats and two dogs.
PrevPreviousClicks of the Day: Monday, March 12, 2012 Edition!
NextClicks of the Day: Tuesday, March 13, 2012 Edition!Next