“Police closed a road in front of a Mill Woods elementary school Monday afternoon as they investigate a suspicious package, just days after explosive devices were found in the field of the same school. Police say a 33-year-old man was arrested on Monday. The man was carrying a backpack and police say he told officers there were explosives in it. Officers believe the man is involved in a similar incident involving explosives over the weekend.”

“A mother, convicted of manslaughter in the drowning deaths of her two sons, was sentenced in a Wetaskiwin courtroom Monday. Allyson McConnell was handed six years with credit for time served. She could be eligible for parole in as little as 10 months.”

“A man charged with murdering a female cab driver more than 30 years ago was acquitted Monday. Robert James Fletcher, 52, was charged with first-degree murder, rape, robbery, kidnapping and possession of an offensive weapon in connection with a 1981 homicide of 33-year-old Gerdina Kruidbos. On Monday, Court of Queen’s Bench Justice Doreen Sulyma acquitted Fletcher of those charges. The judge found there to be reasonable doubt in the case.”

Back to square one?

“A 29-year-old Canadian man wanted in a gruesome slaying and dismemberment investigation has been arrested in Berlin, and the federal government has already begun the process of seeking his extradition from Germany. Luka Rocco Magnotta was arrested at an Internet cafe in the German capital shortly before 2 p.m. local time on Monday, Berlin police spokesperson Stefan Redlich told CTV News. Redlich told The Canadian Press that police acted on a tip from someone who recognized Magnotta at the cafe. Reports say Magnotta was reading news about himself and the case online. ‘

“Toronto police say the deadly Eaton Centre shooting that claimed the life of one person and left several others injured over the weekend was not a gangland attack, but did involve three people with connections to the same crew. At a news conference on Monday, Det.-Sgt. Brian Borg said a suspect that turned himself in early Monday morning was known to police and was currently sentenced to house arrest on unrelated charges.”

Can you imagine just being at the mall and shots start being fired? Such a scary incident.

“Hundreds of websites went ‘dark’ across Canada Monday as a protest against the government’s new environmental legislation, while Conservative MPs fanned out across the country to sell the bill to Canadians. “Black Out, Speak Out,” a protest by a number of environmental groups against the federal government’s C-38 budget implementation bill kicked off Monday with as many as 500 websites either darkening their pages or linking to the main protest page. Among its proposed changes, if passed, the legislation will revamp the approval process for massive energy projects and will eliminate funding for Canada’s National Roundtable on the Environment and Economy.”

“With a military band, a string orchestra and electric guitars on full blast, London’s Buckingham Palace was transformed into a rock venue on Monday as some of the biggest names in music celebrated Queen Elizabeth II’s diamond jubilee.”

It seems like it’d be really fun to be a Royal.

“It’s the news that could offer hope to thousands of women suffering one of the deadliest types of breast cancer. A new drug unveiled in the UK is expected to cut the debilitating side effects of traditional therapy and offer several months to life expectancies.”

“A blood test that measures a marker of immune-system activity may help doctors identify people who are at risk of dying at an early age, a new study suggests. Researchers at the Mayo Clinic measured levels of the immune-system molecules known as free light chains in 15,859 Minnesotans age 50 and up, and found that people whose levels were in the top 10% were four times more likely than the other study participants to die over the next 13 years.”

“Goggles that trick the wearer into thinking the plain snack in their hand is a chocolate cookie, or make biscuits appear larger have been unveiled in Japan, offering hope to weak-willed dieters everywhere. Researchers at the University of Tokyo have developed devices that use computer wizardry and augmented reality to fool the senses and make users feel more satisfied with smaller – or less appealing – treats.”

Lol. That’s one way to go about weight loss.

“Your kids could soon be tagging each other, sending event invites for playdates and commenting on other kids’ walls — provided they’re old enough to read. That’s the brave new future Facebook is imagining as it develops tools for children under 13, according to what “people who have spoken with Facebook executives” told the Wall Street Journal.”

Too young to be on FB? (Though I’m sure kids 13 and under already on it, it’s pretty easy to lie about your age online).

“Facebook’s sliding stock price has at least one hedge fund manager predicting a dismal decade ahead for the social network. ‘In five to eight years they are going to disappear in the way that Yahoo has disappeared,’ Ironfire Capital founder Eric Jackson told the CNBC show Squawk on the Street on Monday.”

“On the day before the video game industry’s biggest convention, Microsoft emphasized at a news conference Monday just how much the company is trying to transform its Xbox 360 from a gaming console into an entertainment hub… The company’s biggest announcement was for a planned multimedia service called Xbox SmartGlass, which would link the Xbox 360 console to smartphones and tablets. With the service, Microsoft said, users could watch a TV program and receive related information about it.”

“Canadians are OK with going into debt for major milestones, such as buying a home, or paying for school, a wedding or honeymoon, a new survey has found. The TD Canada Trust Report says 41% of respondents find it difficult to save money and continue to enjoy their current lifestyles, so many rely on loans, lines of credit, credit cards, and gifts from friends and family.”

Hm. I want to try as best as possible not to go into debt for a major milestone (for example Mike and my wedding next year). But I can see where Canadians are coming from. Still, debt = bad.

“Canadians’ growing love affair with mobile devices is putting the country on track to achieving a wireless penetration rate that exceeds 100 per cent in about three years. More than three-quarters of Canadians owned a wireless device at the end of 2011 but that number is expected to climb as it becomes increasingly common for consumers to own more than one mobile gadget.”

We are so connected.

“Rogers Communications Inc. is moving to implement a raft of untested initiatives over the coming quarters, a period that could reignite growth for the country’s biggest mobile operator — or shape up to be as challenging as the present… the company is turning toward three new markets: so-called “machine-to-machine” technology; retail transactions made with smartphones; and video consumption over mobile devices.”

Good luck to them!

“A majority of British parliamentarians are in favor of naming the tower which houses the famous ‘Big Ben’ bell at the Palace of Westminster the ‘Elizabeth’ tower in honor of the British monarch.”

It just doesn’t have the same ring to it. Lol.

“For those who complain that ebooks lack the olfactory experience of opening a freshly printed book, Passion Paper has conveniently bottled the scent of ink on paper. It’s meant for a person to wear, but you could easily spray a little on near your screen before you settle down with a good ebook.”

Ah, there’s an invention for everything.

“The Romanians claim to have trumped last June’s release of 11,000 floating paper lanterns in Poland with 12,740 of their own on Saturday.” 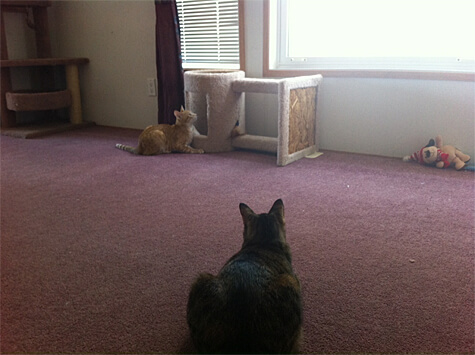 Linda Hoang is a Canadian blogger based in Edmonton, Alberta, who writes about travel, food, lifestyle and pet topics. She's also a seasoned social media/digital strategist with a journalism background, the founder of the Edmonton International Cat Festival and co-founder of Stop Race Based Hate, an online anti-racism education tool. Linda loves exploring the world with her partner Mike, eating their way through cities, supporting local businesses, and photographing Instagrammable Walls. Linda is a fur-mom to two cats and two dogs.
PrevPreviousClicks of the Day: June 1, 2, 3 2012 Weekend Edition!
NextPhoto of the Day: Monday, June 4, 2012Next