Good for her. (Surprised it’s taken this long).

“A bull fighter is in hospital, recovering from serious injuries after he was stomped and tossed by a bull at the Stony Plain rodeo grounds Friday night.”

“A bomb squad was called to a south Edmonton playground Saturday after the discovery of ‘homemade explosive devices.'”

I think this is interesting!

“Environment Canada scientists have observed evidence of toxic contamination of wildlife upstream from Alberta’s natural bitumen deposits that coincides with the oilsands industry’s expansion, Environment Minister Peter Kent was told last summer. According to internal documents obtained by Postmedia News, the government was urged to investigate recent scientific observations of a 40 per cent increase of mercury in bird eggs, considered to be a key environmental indicator of contamination of the natural ecosystems.”

“Toronto police identified the man killed in the violent shooting at the Toronto Eaton Centre Saturday evening and said they have a clear idea of the identity of the shooter. Ahmed Hassan, 24, of Toronto, was killed and seven other people were injured Saturday evening during what the city’s police chief called a “wanton and incredibly dangerous” shooting.”

“Frustrated after a breakdown in negotiations, thousands took to the streets of Montreal Saturday and promised a summer full of demonstrations unless the dispute over tuition fees is resolved.”

Of course they promised that, lol.

“The Canadian Centre on Substance Abuse has issued an alert about “bath salts”, a new synthetic drug that is illegal in some countries and in parts of the U.S., but still legal in Canada. The drug, which can be injected, snorted, smoked and swallowed, has moved across the border from Maine into New Brunswick and appears to be taking hold in the Maritimes.”

“The college student suspected of killing and eating parts of a man staying at his home ranted months ago about “mass human sacrifices” on Facebook, one of several details that emerged Friday in the second gruesome case of alleged cannibalism in the U.S. in a week.”

What is happening… Also the below article would normally fall under “other/weird news” but it ties in with this so up here it shall go:

“The horrific face-eating arrest in Miami and several other seemingly subhuman acts has many people wondering what’s behind this flesh-munching wave of terror. A zombie apocalypse, however, is not what we should be worried about, at least according to the federal government. Over the years the Centers for Disease Control and Prevention has released a couple of tongue-in-cheek “zombie warnings,” which really are just disaster-preparedness stunts. But on Thursday, the agency made it official: Zombies don’t exist.”

“French authorities are closing in on the fugitive suspect in a grisly Montreal killing who has gained worldwide notoriety as the “Canadian Psycho.” Using cellphone signals along with witnesses and video surveillance, police in Paris zeroed in on a series of apartments, hotels and bars across the French capital where people reported seeing Luka Rocco Magnotta.”

Hope they catch him.

“Behind every suicide in crisis-stricken countries such as Greece there are up to 20 more people desperate enough to have tried to end their own lives. And behind those attempted suicides, experts say there are thousands of hidden cases of mental illness, like depression, alcohol abuse and anxiety disorder, that never make the news, but have large and potentially long-lasting human costs. The risk, according to some public health experts, is that if and when Greece’s economic woes are over, a legacy of mental illness could remain in a generation of young people damaged by too many years of life without hope.”

“A plane with more than 150 people on board crashed into a heavily populated neighbourhood in the Nigerian city of Lagos on Sunday. Federal aviation authorities said no one on board survived the crash. Harold Demuren of Nigeria’s Civil Aviation Authority confirmed that all passengers aboard the Dana Air flight from Abuja to Lagos died.”

“Syrian President Bashar Assad denied Sunday that his government had anything to do with last week’s gruesome Houla massacre, saying not even “monsters” would carry out such an ugly crime.”

Do you believe him… ?

“Global cancer cases are projected to rise 75 per cent by 2030, in part because many other diseases are being stamped out and more developing countries are adopting Western lifestyles linked to cancer, international health experts reported. While population growth and aging explain much of the increase, at least one-fifth of the new cancer cases will likely be due to preventable factors, the researchers predict.”

The American Medical Association is now considering the labeling of products that contain genetically modified or engineered foods.”

Would be good to know.

“Eating raisins as an after-school snack prevents excessive calorie intake and increases satiety – or feeling of fullness – as compared to other commonly consumed snacks, a new study has suggested.”

Good to know! Although raisins are so blagh.

“This guy is 69 years old, but half of his face looks much, much older than that. He was a trucker and, for 28 years, his face received much more sunlight on the left side, resulting on premature aging. We all knew that being exposed to the sun makes you age prematurely, but seeing the dramatic difference in a single face is just stunning.”

“Will E3 2012 be the year of the Wii U? From a hardware perspective, most signs seem to be pointing to ‘yes.’ Odds seem pretty good that Microsoft will be the least buzzy of the big three press conferences this year. Likely no major new hardware on this end (for Sony), but the company is expected by some to give a jolt to flagging Vita sales with a significant — and permanent — price cut. Expect (mobile/casual gaming) creeping to continue, try as the Nintendos of the world might to keep the focus on the console.”

Lots of tech-y game news expected for this week’s Clicks as I follow E3 headlines.

“Nintendo unveiled a new Wii U GamePad today that sports a near-field communications reader and that can be used as a TV remote. The new game console tablet features a 6.2-inch touch-sensitive screen and a fully independent infrared TV remote, Nintendo President Satoru Iwata revealed during a streamed presentation (see below) in advance of this week’s E3 game conference. Known mostly for use in electronic wallets, the NFC technology in the GamePad will be able to read and write data from cards and figures.”

Idk if this will be successful.

“The Internet search giant Google has announced, via its official blog, that it will change the way in which its service functions in China. Google will now issue an alert to users when they key in search terms which are likely to trigger a block from the Chinese authorities (a strategy which has been called the “Great Firewall of China”). The BBC reports that Google has also gone further and the search engine will suggest certain search terms which could allow the user to avoid censorship.”

“After paying for the hall, the rings, the food and the dress, couples planning weddings will have even more fees to worry about when it comes time to dance. New copyright rules will impose fees on venues holding live events that play recorded music.”

“If by chance the skies are clear on the evening of June 5, skywatchers should be able to see Venus, the goddess of love and beauty, snuggling up to Helios, the personification of the sun… this will be one of the greatest shows on earth — the last chance for everyone to see an astronomical event that occurs in pairs eight years apart and only four times in 243 years.”

“Samberg won’t return as a cast member next season, according to his publicist, Carrie Byalick. Samberg’s exit follows that of “SNL” cast member Kristen Wiig.”

“A moving collection of iconic photographs from the last 100 years that demonstrate the heartbreak of loss, the tremendous power of loyalty, and the triumph of the human spirit. Warning: Some of these will make you weep.”

I didn’t weep but I was close to doing so. Very powerful images…

“Thomas O’Malley Flufferpants, the cat, was rescued off the streets with severe respiratory and dental problems, after a few doctor visits he is doing better and has even made friends with Murkin a shelter dog that was adopted at 6 months old.”

This is beyond adorable. Just melts my heart. Ah, interspecies mingling.

“May we introduce “Dogtye” and “Katra,” the cleverly nicknamed animals that tackle the roles of Gotye and Kimbra for the nearly two-minute clip mimicking the duo’s hypnotizing music video.”

So cute and great video production! 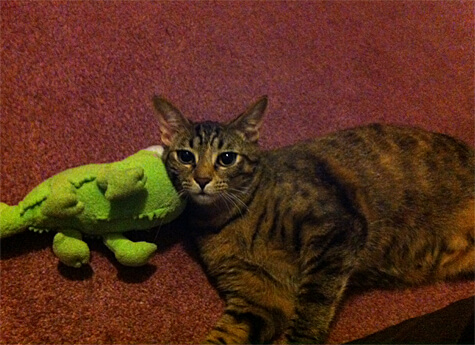 Thor with her best friend Pascal. They are so cute.

Linda Hoang is a Canadian blogger based in Edmonton, Alberta, who writes about travel, food, lifestyle and pet topics. She's also a seasoned social media/digital strategist with a journalism background, the founder of the Edmonton International Cat Festival and co-founder of Stop Race Based Hate, an online anti-racism education tool. Linda loves exploring the world with her partner Mike, eating their way through cities, supporting local businesses, and photographing Instagrammable Walls. Linda is a fur-mom to two cats and two dogs.
PrevPreviousPhoto of the Day: Sunday, June 3, 2012
NextClicks of the Day: Monday, June 4, 2012 Edition!Next