“The wife of the only guard to survive an armed robbery on the University of Alberta campus ten days ago said Matthew Schuman is well on his way to recovery.”

“Each person can enter up to five names that pertain to either traits unique to Edmonton, non-commercial landmarks famous to Edmonton, or provincial animals.”

Oh my lord… why can’t we stick to location names? Can you imagine a line being named after an animal? Let’s go to Black Bear station? So silly…

“City councillors have officially thrown the idea of a $60-million Hawrelak Beach proposal overboard. But, they’re sailing ahead with a smaller-scaled version that could still cost taxpayers upwards of $5 million. Edmonton’s Community Services Committee voted Monday to move forward with a new idea for a beach area – complete with sand and a wading pool – between the lake and the parking lot.”

I like the idea of having a beach in the city… :)

“An arms-length review of record-keeping at Scouts Canada suggests the youth organization has several procedural problems when it comes to handling and reporting allegations of sexual misconduct. The forensic review, conducted by private auditing firm KPMG, explores how the association handled sexual misconduct cases over a 64-year period — from 1947 to 2011. Out of 486 alleged abuse cases, the audit confirmed that at least 65 cases weren’t shared with authorities — either at the request of the victim or due to procedural failings.”

“Canadians taxpayers have spent more than $85,000 over the last three and a half years helping the Conservatives rebrand the federal government as the “Harper Government.” Government of Canada news releases now routinely credit initiatives as coming from the Harper Government, a term some observers have deemed excessively partisan and a break with traditional practice.”

“Oxford University research says the London Games are on track to be among the most expensive to date with a projected cost of £8.4 billion in real terms – and at 101% over budget.”

“Canadians need to engage in a broad national dialogue on the issue of whether terminally ill patients should have the legal right to physician-assisted suicide, says an editorial in the Canadian Medical Association Journal. The editorial — entitled “Choosing when and how to die: Are we ready to perform therapeutic homicide?” — follows a recent report by a Quebec government commission which recommends that dying patients should have the right, under strict conditions, to request medical assistance to die.”

What do you think?

“According to new research, eight percent of third graders, four percent of sixth graders and 13 percent of ninth graders report engaging in self injury. Girls in ninth grade are most likely to harm themselves but kids as young as seven are also at risk.”

WHY. This is awful.

“As the diet — used to treat celiac disease — morphs into a movement of sorts, some experts caution against mistaking a medically required lifestyle for a food fad… some say they are concerned about the growing popularity of the gluten-free diet, fearing it could cause cases of celiac disease and gluten sensitivities to go unnoticed for even longer.”

No gluten-free food fad jumping for me!

“MyVoice processes sign language motions and can translate them using specific algorithms into an electronic voice.”

“Seniors are crossing the digital divide and tapping into technology now more than ever, according to a new survey. The Revera Report on Tech-Savvy Seniors shows that of the 27 per cent of seniors aged 75 and older who are online — which is up from five per cent in 2000 — more than half use social media to connect with family and friends. The report also showed that one-in-five seniors use Skype or Facetime to chat with loved ones.”

Seniors of the future!

“Without asking for permission, Facebook has changed users’ listed email address to one ending in “@facebook.com.” The changed was discovered Saturday, and has resulted in either users having their @facebook.com address being listed or simply having all of their other addresses be hidden, as happened in my case.”

“Microsoft Corp agreed to buy online social network firm Yammer Inc for $1.2 billion US in cash, which will allow the software company to offer a service like Facebook Inc’s to corporate customers.”

“Sony is readying a line of interactive storybooks called Wonderbook, which will use the PlayStation Move motion controller and the PlayStation Eye camera to bring books to life on a TV screen. The first title, called Wonderbook: Book of Spells, is collaboration with Harry Potter author J. K. Rowling, who is producing new, original content for the project.”

“YesMail Interactive ran a comprehensive three-month study of consumer social engagement with online campaigns for 20 major retails brands, including Abercrombie & Fitch, The Gap, Ralph Lauren, American Eagle, J Crew, and Forever 21. It discovered some astonishing insights which it’s sharing with the world … such as why Tuesday is such a great day to kick off a campaign.”

“Gelblum argues that RIM will have to get smaller. How much smaller? RIM will likely deliver 10 million to 20 million devices in the future. To break even on that volume, RIM will need to cut 90 percent of its 16,500 employees to wind up with 2,000 workers. In this scenario, RIM will be a niche device maker focused on high-security markets.”

Three months worth of living costs is a lot…

“For the first time ever—yes, ever—shipments of LCD flat-screen TVs have declined.”

Well how many TVs do people need, lol.

The giant tortoise Lonesome George, whose failed efforts to produce offspring made him a symbol of disappearing species, was found dead on Sunday, officials at the Galapagos National Park announced. Lonesome George was believed to be the last living member of the Pinta island subspecies and had become an ambassador of sorts for the islands off Ecuador’s coast whose unique flora and fauna helped inspire Charles Darwin’s ideas on evolution. The tortoise’s age was not known but scientists believed he was about 100.”

Goodbye George. I am sad you had no family :(

“In spite of the growing influence of anti-cruelty campaigners in China, cat and dog meat markets are thriving. China is one of few countries where cat and dog meat eating remains legal and socially acceptable.”

“HBO generated a huge amount of talk — positive and negative — about its new Aaron Sorkin drama, “The Newsroom,” and it managed some better-than-average audience totals for its premiere Sunday night. The drama, about a fictional cable newscast, pulled in 2.1 million viewers for its 10 p.m. debut, a figure that put it toward the high end of recent drama premieres on the network — and much better than comedy premieres.”

I am watching this online tonight! I hope it’s good!

“Kevin West leads a team responsible for maintaining the trademark flavour of Tim Hortons’ coffee, a process engineered from the company’s facility on the outskirts of Hamilton. Every day he pours a seemingly endless stream of coffee made with beans from around the world. The goal is to ensure that the quality of each is up to expectations, and all together he estimates that he tastes about 75,000 cups each year.”

“Important international soccer tournaments can wreak havoc on fans’ sleep schedules due to time zone differences, and one man in China died last week watching after watching every game of Euro 2012.”

Wow. Not worth your life. 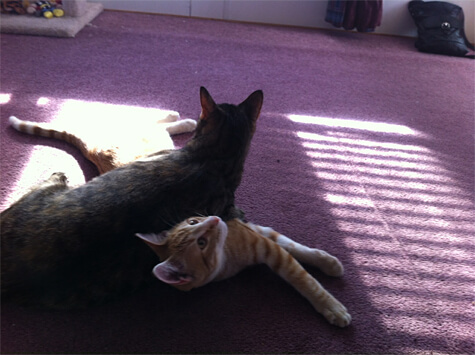 Linda Hoang is a Canadian blogger based in Edmonton, Alberta, who writes about travel, food, lifestyle and pet topics. She's also a seasoned social media/digital strategist with a journalism background, the founder of the Edmonton International Cat Festival and co-founder of Stop Race Based Hate, an online anti-racism education tool. Linda loves exploring the world with her partner Mike, eating their way through cities, supporting local businesses, and photographing Instagrammable Walls. Linda is a fur-mom to two cats and two dogs.
PrevPreviousClicks of the Day: June 22, 23, 24 2012 Weekend Edition!
NextSocial Media Column: Edmonton police tweet tooNext