“A couple from Thorhild County is warning pet owners to keep a close eye on their pets after their dog went missing and was found dead days later. Several other dogs in the area have also been reported missing.”

Gahhhh. Why do people do stuff like this? Leave the animals alone!

“Some women who live and work around Whyte Avenue are planning to take extra precautions after learning an eighth woman has been attacked in the area. The most recent attack happened last Sunday, when a 22-year-old woman was assaulted from behind by a man in the area of 111 Street and University Avenue. It’s the latest in a string of reported assaults this year in the Whyte Avenue area.”

Scary. Hope they catch the suspect(s).

“The Internet has long been a no man’s land for legal authorities and privacy experts across the country, but a recent Facebook post that preceded a multiple murder has caused both camps to prepare for battle. Days before three armed guards were killed and a fourth wounded as they delivered cash to the University of Alberta, a controversial posting appeared on the Facebook page of a man whose name matches that of the primary suspect in the case. “I wonder if I’d make the six o’clock news if I just starting popping people off,” read the quote on the page of a Travis Baumgartner.”

Always be careful what you post online. Not particularly fond of the idea of an employer monitoring my social media updates but at the same time I believe I post pretty non-controversial things so I don’t really have much to be worried about.

“A black bear was euthanized Saturday night after it entered the city of Grande Prairie. Police say attempts to haze the bear and encourage it to leave or take refuge in a tree were unsuccessful. Fish and Wildlife officers decided to euthanize the bear because of its behaviour and aggressive posture.”

And I quote … ‘aggressive posture.’ This is sad. Was it really that difficult to try and tranquilize it? Nine times out of ten I will side with animals over humans in these cases… poor animals.

“And the hardest in the world to find a match for blood cells; one in millions, literally.”

That sucks about the blood cell match … but mixed babies are so pretty and I am excited to contribute to this demographic in coming years, lol.

Hopefully he is a good leader.

“Syrian President Bashar Assad issued a decree forming a new government Saturday, but it will be headed by a key loyalist and the foreign, defence and interior ministers kept their jobs.”

So a whole lot of no change will come of this.

“Turkey on Sunday summoned its NATO allies for emergency consultations on the downing by Syria of one of its warplanes, a move that potentially opens the door to international military intervention in the Syrian crisis for the first time. Turkey said it had invoked Article 4 of the NATO charter — which allows consultations in case of a security threat — after concluding that the plane was over international waters in the Mediterranean when it was hit by a Syrian missile Friday.”

I think it’s about time there was military intervention. Clearly talking isn’t doing anything.

“Penn State University football legend Jerry Sandusky faces a minimum 60 years in prison after being found guilty of sexually abusing 10 young boys over a 15-year period. After more than 20 hours of deliberations, the jury returned with a guilty verdict Friday on 45 of the 48 counts he faced.”

“An Edmonton doctor says people will die if planned cuts to refugee health benefits go ahead… The Interim Federal Health Program, which provides temporary health insurance to refugee applicants who aren’t eligible for provincial or territorial coverage, will be pared back, starting June 30. The program will no longer include vision, dental or supplemental health benefits for asylum seekers. Most pharmaceutical benefits will also dry up.”

I feel so sad for refugees. Sigh.

“A Canadian invention designed to improve blood flow to the legs has caught the eye of researchers who think it could play a role in preventing the hundreds of leg amputations from diabetes that happen ever year in Canada. It’s called the Venowave, a battery powered device strapped to the calf that squeezes the leg and massages blood upward, to improve circulation.”

“Scientists at the university saiy they had previously documented that substances from the South African plant species Crinum and Cyrtanthus – akin to snowdrops and daffodils – have an effect on the mechanisms in the brain involved in depression. Their new research shows that many of these plants contain compounds that can pass the defensive blood-brain barrier that is a key challenge in all new drug development.”

“Though more than 7,000 languages are spoken throughout the world today, researchers believe half of those will fade over the next century. To combat that gloomy prospect, Google’s official blog announced the launch of its Endangered Language Project. According to the website, the project is an online resource to record, access, and share samples of and research on endangered languages, as well as to share advice and best practices for those working to document or strengthen languages.”

“Now that Facebook’s ads and sponsored stories will appear on Zynga, be prepared for them appearing, well, anywhere and everywhere. This may well be more painful than you could imagine.”

Suck it up, guys.

“On Friday, Facebook announced it would be unveiling a new feature to allow users to have a permanent option to edit comments made. According to Yahoo! News, the social network giant introduced an edit feature, avoiding a “more cumbersome” deletion.”

Deleting IS cumbersome, so this is welcome news.

“More executives than employees think social media has a positive impact on workplace culture. While 45% of executives believe social media is good for their companies’ culture, only 27% of employees agree, finds a recent survey by Deloitte.”

I’m surprised that so little employees thought that!

“Research In Motion is considering a plan to split its company in two, separating its handset division from its messaging network and selling off the struggling BlackBerry hardware business, according to The Sunday Times. The British newspaper (subscription required), which didn’t cite sources, also mentioned Facebook and Amazon as “potential buyers.” Another option has the company staying intact but selling a large stack to a larger tech company such as Microsoft.”

“Canadians are in a U.S. shopping state of mind this summer thanks to changes in regulations that allow them to buy more without paying duty, a new survey suggests. The Canadian Press-Harris Decima poll on relaxed cross-border shopping limits that went into effect June 1 found a large majority in favour of the changes — and 54 per cent of those planning a trip stateside said they intended to spend more. Additionally, four in 10 said they were likely to purchase more duty-free goods.”

I have never been big on cross-border shopping. (Although I am still fairly young so maybe eventually I’ll be one of those types, lol).

“A case of mass death of cattle has led to a federal investigation in Central Texas. Preliminary results suggest that the deaths were caused by the cows feeding on a hybrid form of grass developed by USDA and University of Georgia scientists.”

“Scientists claim to have found clinching evidence that Mars’ interior holds vast reservoirs of water, with some spots apparently as wet as Earth’s innards. The new findings, published in the journal Geology, upend previous studies, which had estimated that the Red Planet’s internal water stores were scanty at best – something of a surprise, given that liquid water apparently flowed on the Martian surface long ago.”

Living on Mars becoming more of a reality~

“There are a lot of folk remedies for treating a jellyfish stings, but science suggests that hot water and topical painkillers actually work the best – at least in North American waters. Popularly promoted remedies range from vinegar to meat tenderizer to baking soda mixed with water. In a pinch, the victim – or a very good friend – might try urinating on the sting.”

Lol. Still love that Friends episode when Monica got stung! ;)

“To promote its grand opening last week, a supermarket in Süderlügum on the German-Danish border offered as many free groceries as they could fit in their cart (up to €270) to the first 100 shoppers who showed up butt naked.”

“Kodi the Kitten shows you how in just a few easy steps, you can be walking your human with a leash.” 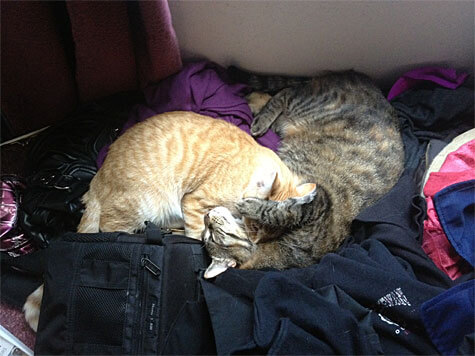 Adorable kitten snuggles all over my pile of clothes. Good reminder to put my clothes away, lol.

Linda Hoang is a Canadian blogger based in Edmonton, Alberta, who writes about travel, food, lifestyle and pet topics. She's also a seasoned social media/digital strategist with a journalism background, the founder of the Edmonton International Cat Festival and co-founder of Stop Race Based Hate, an online anti-racism education tool. Linda loves exploring the world with her partner Mike, eating their way through cities, supporting local businesses, and photographing Instagrammable Walls. Linda is a fur-mom to two cats and two dogs.
PrevPreviousReview: Rice Bowl Deluxe
NextClicks of the Day: Monday, June 25 2012 Edition!Next