“Saturday marked the five year anniversary of the largest residential fire in Edmonton’s history. On July 21, 2007, many Edmontonians were left homeless when a raging inferno tore through dozens of homes in the south Edmonton neighbourhood of MacEwan.”

Can you imagine being one of the homeowners affected by this fire?? Or any fire… Fires really freak me out.

“An independent third party is being hired to look into pipeline safety in the province. Energy Minister Ken Hughes made the announcement on Friday, on the heels of three recent pipeline spills that occurred in the province in less than a month. The independent third party, along with the Energy Resources Conservation Board, will examine how pipeline integrity is managed, how safety of pipelines crossing water ways is ensured, and how responses to pipeline incidents are handled.”

“Edmonton police are investigating a possible hate crime after a University of Alberta student was attacked near the main campus earlier this week.”

Sad that this happened… I can’t believe it’s still happening these days. It shouldn’t.

“Some Edmonton food bloggers went head-to-head in a culinary cook off at Churchill Square Sunday. The food challenge was a part of the first annual Atco Gas Cook-Off, which includes two competitions involving local food bloggers and local chefs.”

“Fuel for the cars is obviously critical at the Edmonton Indy but fuel for drivers and their crew members is also important. CTV News got a behind-the-scenes look at the man who helps keep the Andretti team prepared for the big race. Erwin Brecher is a one-man show. It’s his job to feed the entire Andretti race team. On an average race weekend, he’ll make enough food to fuel 200 people.”

“A heavily armed, masked gunman opened fire in a packed Colorado movie theatre during a midnight screening of the new Batman movie, killing 12 people and injuring 58 others.”

Craziest story… (of the year?) So, so terribly devastating.

“Explosives experts have removed all hazardous materials from the apartment of the suspect in the Colorado shooting, police said Saturday evening, hours after telling reporters they found “multiple booby traps” and improvised explosive devices in the home. The Aurora Police Department announced the development in a statement on Saturday evening, saying that “all hazards have been removed,” and have been taken to “a disposal site.” “The FBI Evidence Response Team (ERT) remains on scene processing the apartment for evidence,” the statement read.”

I just don’t know what was going on in the suspect’s mind… planning and doing all of this.

“A woman killed when a gunman opened fire in a Colorado movie theatre had survived Toronto’s recent Eaton Centre shooting and wrote in a blog that she was “blessed” to have survived the first incident. Jessica Ghawi, 24, was among 12 people shot dead early Friday morning when gunfire erupted at a midnight screening of Dark Knight Rises in Aurora, Colo.”

Unbelievable coincidence… one of many lives cut way, way too short.

“For the past 10 days, JoePa supporters stood vigil by the statue, they laid flowers at the statue’s feet, but in the end it wasn’t enough to keep the iconic bronze statue of Joe Paterno in its place. Time of death: 8:20 a.m. ET. “I think it was an act of cowardice on the part of the university,” Mary Trometter of Williamsport, told the Washington Post, while wearing a shirt bearing Joe Paterno’s image. ESPN says that Penn State rendered its verdict to remove the 7-foot-tall, 900-pound bronze statue of Joe Paterno from its pedestal on the west side of Penn State football Stadium on Sunday morning. And this is exactly the reason Trometter felt betrayed. She said university officials promised openness but said nothing about the decision until just before the removal work began at 6:30 a.m.”

“According to a leaked tape of an internal meeting, a company charged with decontaminating the Fukushima Daiichi Nuclear Power Plant, forced workers to lower their radiation readings. The workers were given lead boxes by a senior executive, which they were told to make into shields. They were told to place these over the dosimeters and, as lead effectively blocks radiation, significantly lower readings were produced.”

“In continuing heavy rains in China, Beijing has been inundated with torrential rains, killing at least ten and stranding 80,000 at the airport. Digital Journal reported on July 15 on the flooding and landslides in southern and central China, where at least 21 people were killed. Now, in one of the strongest rainfalls in over forty years, Chinese TV is reporting that Beijing has experienced flooding in the streets, killing at least ten people.”

“Norway on Sunday paused to commemorate the 77 victims of a bomb and gun massacre that shocked the peaceful nation one year ago, a tragedy that the prime minister said had brought Norwegians together in defence of democracy and tolerance.”

“Egg allergies can be beaten – or at least substantially reduced, research suggests. As part of the study, children with severe egg allergies were fed tiny amounts of egg protein. Over time, the dose was steadily increased. After 22 months of daily treatment, a significant percentage of the children were essentially cured, while others experienced far less extreme reactions to eggs, according to the findings published this week in The New England Journal of Medicine.”

“Research released by the U.S. Centers for Disease Control and Prevention (CDC) says drinking among pregnant women is a public health concern. The agency noted 1 in 13 pregnant women drink alcohol.”

Why are people so stupid?

“According to a new report, over one-third of the children in Japan’s Fukushima region could be prone to cancer, due to unusually overgrown thyroid glands. The Sixth Report of Fukushima Prefecture Health Management Survey states that after examining more than 38,000 children from the area, it was found that more than 13,000 have cysts or nodules as large as 5 millimeters on their thyroid glands. This is a shockingly large number of abnormalities which, experts state, pose a risk of becoming cancerous.”

“Apple’s next iteration of the iPhone could drop in the fourth quarter. That’s according to Verizon CFO Fran Shammo, who hinted at the possible timing during the company’s quarterly conference call today with a vague reference to a major phone the carrier expects to launch in the fourth quarter. The next iPhone is widely believed to feature a new design, bigger display, and the ability to tap into the faster 4G LTE network. It’s also expected to launch in the fall, although the timing remains unclear. A fourth-quarter launch suggests Apple may move in October, similar to its launch of the iPhone 4S last year.”

“Google’s officially out of stock of 16-gigabyte Nexus 7 tablets. And, according to sources speaking to The Guardian’s Charles Arthur, it’s because the company “seriously underestimated” demand for the seven-inch device.”

Lol. I’d seriously underestimate demand for anything that isn’t an Apple product too, lol.

“Canadians will soon have more say about which television stations come into their homes after the country’s broadcast regulator came down on the side of consumers for the second time in a week. The Canadian Radio-television and Telecommunications Commission ruled Friday that consumers should be able to subscribe to individual channels instead of expansive packages, a decision that hints at looser cable-TV subscription models. But there’s a catch – the fewer channels a subscriber signs up for, the more expensive each channel will be.”

“News Corp’s Rupert Murdoch has stepped down as a director from a string of boards overseeing the Sun, Times and Sunday Times newspapers in Britain, the company said in an internal memo on Saturday. The resignations follow the announcement in June that News Corp would be split into two separate companies: a smaller publishing division and a much larger entertainment and TV group.”

“The tentacled artificial creature, made from silicon, has been dubbed “Medusoid” because of its resemblance to the snake-haired character from Greek mythology whose gaze turned people to stone. It is able to mimic the swimming movement of a jellyfish thanks to muscle cells from rat hearts which were implanted onto its silicon frame and grown into a pattern similar to the muscles of a real jellyfish… Janna Nawroth, lead author of the study, said that most researchers working in tissue engineering have attempted to copy tissue or organs by simply recreating its major components, regardless of what their function is and whether they could be replaced by something simpler.”

“Wildlife officials are baffled at a series of photos that appear to show a person dressed up in a goat suit costume among a herd of goats and crawling on all fours near Ben Lomond Peak in Weber County, Utah. The photo was first posted to the image-sharing website Imgur.com. According to the state Department of Wildlife Resources (DWR), they have no idea who the person was or what he was trying to do.”

“An all-female doo-wop band whose image is believed to have been the first photo uploaded to the fledgling world wide web is to play its final gig. Les Horribles Cernettes take their swansong at the Hardronic Festival at the Cern laboratory in Geneva – the birthplace of the web. A picture of the women was uploaded to the web on 18 July, 1992, by web creator – and fan – Tim Berners-Lee. He wanted it to test out the version of the web he was working on at Cern.”

“This photo of an endangered whale shark was snapped by adventure photographer Shawn Heinrichs.”

“Selective mutism is an anxiety disorder that makes it almost impossible for Lorcan Dillon, who lives in Davyhulme in the UK, to speak to classmates and communicate his emotions to family. But all that began changing when his mother got him a cream Birman named Jessi-cat two years ago, reports the Daily Mail. The two quickly became inseparable and Lorcan has since made huge strides in overcoming his disability.” 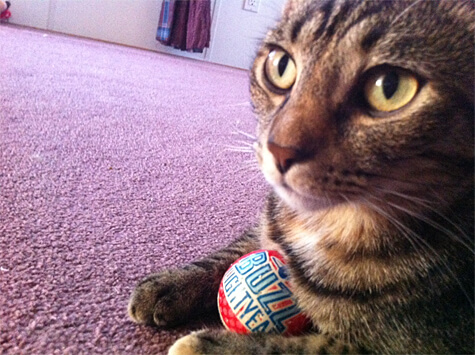 Linda Hoang is a Canadian blogger based in Edmonton, Alberta, who writes about travel, food, lifestyle and pet topics. She's also a seasoned social media/digital strategist with a journalism background, the founder of the Edmonton International Cat Festival and co-founder of Stop Race Based Hate, an online anti-racism education tool. Linda loves exploring the world with her partner Mike, eating their way through cities, supporting local businesses, and photographing Instagrammable Walls. Linda is a fur-mom to two cats and two dogs.
PrevPreviousReview: Tutti Frutti (Whyte Avenue)
NextBirthday Week! (No Clicks of the Day)Next