I have been slacking on my Clicks of the Day the last week, I apologize!

“Police are investigating what they call a human tragedy, after a 16-year-old girl died from a violent incident at a north end home Monday. Police were called to a duplex in the area of 125 Street and 127 Avenue just before 5 a.m. where they found a 16-year-old girl in medical distress at the residence. The girl was treated and transported to hospital where she later died.”

“A Hinton family is grieving after a toddler was fatally struck by a vehicle over the weekend. Family members tell CTV News the two-year-old girl was with her mother and brother when a pickup truck hit the child’s stroller after 11 p.m. on Saturday. A makeshift memorial of flowers, teddy bears and personal messages is growing at the spot where the toddler, identified by family as Gracie Allison McLaughlan, was hit.”

So, so, so sad. It was a very deadly long weekend in the province.

“Albertans will now be paying less for generic drugs after new pricing came into effect this weekend. They can also now have their prescriptions renewed by pharmacists.”

“Pride filled the rotunda of the Alberta Legislature Sunday as dozens of Edmontonians celebrated Canada’s 145th birthday by officially becoming Canadian citizens. The citizenship ceremony at the legislature was one of more than 30 held across the country.”

“A police investigation into the death of Concordia University student Jun Lin led investigators to a Montreal park where an object believed to be human remains was found on Sunday, authorities said.”

I hope they find his head. Can’t imagine how his poor family is feeling. :(

“A brief, violent storm that brought the U.S. capital to its knees in the midst of a heat wave dramatically highlighted that millions of Americans remain vulnerable to extended power blackouts because of a reluctance to invest in infrastructure and patchy, ineffective regulations. Electrical utilities are advising customers in and around Washington that it may well be a whole week before all power is restored after the unusually potent storm that ravaged the mid-Atlantic region on Friday.”

At the mercy of Mother Nature.

“There are few signs diplomacy can stem Syria’s worsening conflict, leaving Western leaders – and even more so their Arab and Turkish allies – pushed ever further towards backing Bashar al-Assad’s ouster by force.”

Taken long enough… too many people have died.

“Childhood punishments such as spanking, slapping, and hitting – even in the absence of full-scale maltreatment – are associated with an increased risk of mental disorders in adulthood, researchers reported.

“Adults who reported such punishments in their childhood had a greater risk of mood disorders, anxiety disorders, alcohol and drug abuse dependence, and several personality disorders, according to Tracie Afifi, PhD, of the University of Manitoba in Winnipeg, and colleagues.”

“(Artist Mira Kaddoura) began to work on The Wonder Clock, a conceptual art project and “living, ticking, breathing piece” (as pictured above) that she showed at Art Basel on Thursday. It’s also a website, TheWonderClock.com, as well as a downloadable app available on iTunes. On the home page of the site, which also launched Thursday, Kaddoura’s own estimated biological clock ticks down, slowly but surely. It’s currently at the 9 and a half year mark. This may seem depressing, this sort of finite timepiece related to fertility, but the artist means it to be an empowering, enlightening statement for women and also for men, a way to inspire people to talk about the fact that there is an end date at which women can naturally have kids, and to make plans about what they want before they reach that date.”

“Google’s Android platform has woven in voice actions for some time, but it’s only in Android 4.1 Jelly Bean that Google has managed to bring voice commands to the forefront in a meaningful way. Mostly, by dressing up the voice search interface, and making voice search available from any screen.”

“The line between work and free time has become so blurred it’s practically non-existent. 80% of people continue working after leaving the office. Half of them do so because they feel they have “no choice.” Connectedness means customers demand fast replies. There’s no off switch.”

Do you fall in that percentage?

“Microsoft Corp admitted its largest acquisition in the Internet sector was effectively worthless and wiped out any profit for the last quarter, as it announced a $6.2 billion charge to write down the value of an online advertising agency it bought five years ago.”

“The Huffington Post has closed an exclusive agreement with Ustream, the live streaming service announced today. Following the announcement, the HuffPo will get access to videos from Ustream’s citizen journalists, which it will be able to embed on its breaking news pages. Citizen journalism is the key word here; with this partnership, the HuffPo will obtain breaking content from Ustream’s community, many of whom are reporting live from news scenes.”

“Scientists believe the “God particle” that might explain the underpinnings of the universe is real, and they are about to present their evidence to the world. Physicists at the world’s biggest atom smasher plan to announce Wednesday they have nearly confirmed the primary plank of a theory that could shape the scientific understanding of all matter.”

“As far as anyone knows for certain, brown widow spiders have only resided in Southern California for a decade or so — the first in the region was spotted in Torrance in 2003. But a new survey conducted by California entomologists shows that the spider is now making itself quite comfortable in our neck of the woods.”

Shudder. Spiders are so scary.

“On the U.S. Pacific island state of Hawaii, an invasive predator is threatening many native bird species with extinction. The predator is the mongoose, a non-native mammal introduced to the island chain over a century ago to control rats in the sugar cane fields. Now, environmental groups say, it’s the mongoose that’s out of control, feeding on the eggs and chicks of the island’s many ground-nesting birds, including several endangered species that lay just one egg per year.”

“Anderson Cooper has made it official: He’s gay. The host of “AC360” and “Anderson” has never publicly confirmed that detail about his private life before, but he’s never denied it, either. Cooper’s sexual orientation has long been an open secret, but it took an Entertainment Weekly cover story about gay celebrities to prompt the newsman to finally come out.”

Good for him for coming out! :) Not too shocking though #worstkeptsecret ;)

“A find described as “extremely rare” and “bizarre” has been uncovered in Cambridgeshire – an Anglo-Saxon woman buried with a cow. It is the first time the Anglo Saxon grave of a woman has been found to contain an important domestic animal.”

“The zombie craze may possibly have spread to China. Reports of a crazed, drunken bus driver attacking a female driver and gnawing her face have been linked to the cannibal craze in the west.”

“A court in Cologne has pardoned 38 witches, 385 years after they were sentenced to death and burnt at the stake.”

“Jen Whitelam, 23, and her one-year-old daughter, Bella, were walking out the front door of their apartment at the same time an out-of-control semi-truck came careening towards them. According to the Daily Mail, Whitelam grabbed her daughter’s hand and sprinted through her home with the 32-ton truck hot on their heels.” 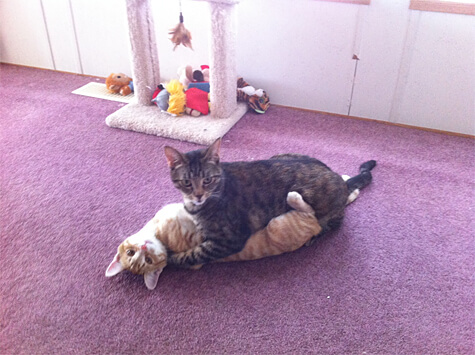 What are you doing to Loki, Thor!!

Linda Hoang is a Canadian blogger based in Edmonton, Alberta, who writes about travel, food, lifestyle and pet topics. She's also a seasoned social media/digital strategist with a journalism background, the founder of the Edmonton International Cat Festival and co-founder of Stop Race Based Hate, an online anti-racism education tool. Linda loves exploring the world with her partner Mike, eating their way through cities, supporting local businesses, and photographing Instagrammable Walls. Linda is a fur-mom to two cats and two dogs.
PrevPreviousRecap: Making Butter Chicken for the first time!
NextSocial Media Column: Podcast rocksNext