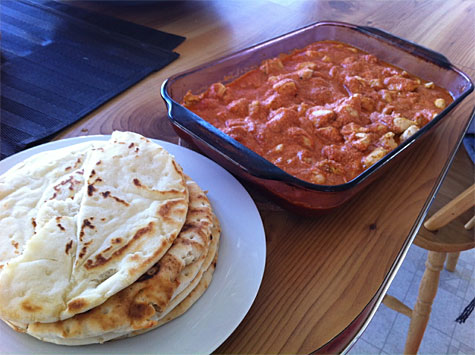 On Friday Mike texted me while I was at work and asked if I could pick up ingredients to make butter chicken for dinner that night. We had been wanting to try our hand at butter chicken for awhile but other dinners kept getting in the way.

But Friday looked to be a good day to make butter chicken for the very first time!

I looked at a few different recipes before deciding on this “Easy Indian Butter Chicken” recipe from Allrecipes.com because it had received more than 300 reviews with a 4.5/5 rating. I read the comments and a lot of it said the recipe was super fatty (but shouldn’t butter chicken be fatty?) and that the amount of butter/cream used resulted in excess of sauce, so based on those critiques I added my own tweaks to the recipe.

This is my modified version:

Bake in oven, uncovered, for about 12 minutes (until chicken is fully cooked, but I also mostly cooked it in the frying pan).

Melt a few tablespoons of butter in a skillet over medium heat. Stir in onion flakes. Add tomato sauce, yogurt, salt, cayenne pepper, garam masala, and 1/2 cup of butter in same skillet until it turns that “butter chicken colour.”

Let summer on medium-low, covered, for 30 minutes, stirring occasionally. Then pour chicken into sauce and simmer for another 5 minutes before serving (with rice).

I decided to swap out the heavy cream for fat free Greek yogurt and instead of three cups that the original recipe called for, I just used two cups. I also used just 1/2 cup of butter instead of 1 cup. I couldn’t find any tandoori masala at Safeway so I opted for Indian masala instead (the masala really is what gives butter chicken that ‘butter chicken’ smell).

First step was cooking the chicken – easy enough. Season with masala when its cooked. 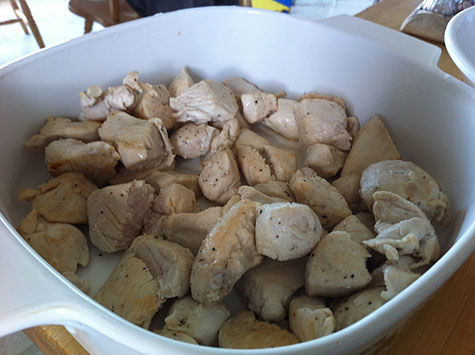 Cubed chicken waiting to be seasoned with masala spice!

Here’s the cream substitute I used! 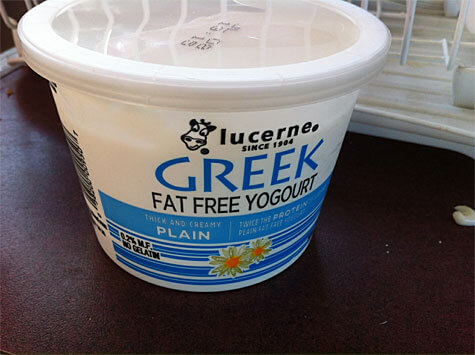 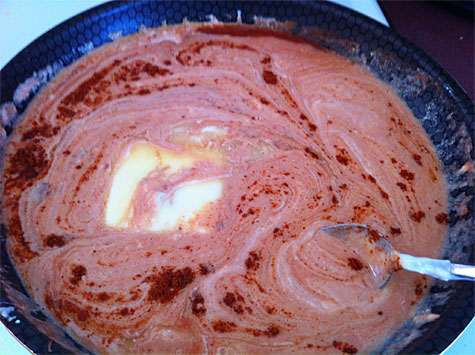 See! That sauce screams butter chicken and it only took a half hour of simmering. :) 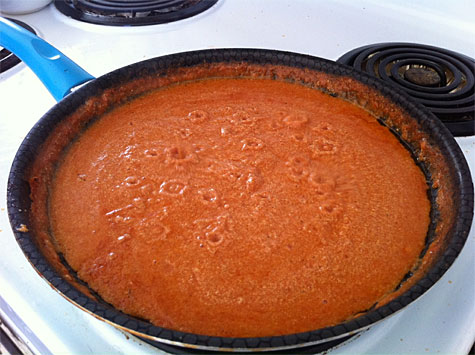 We heated up our store-bought naan bread (it doesn’t say that you have to but it feels weird if you eat it right out of the package). Just heated it enough so that it got a bit more crisp and had a few signature burn marks. 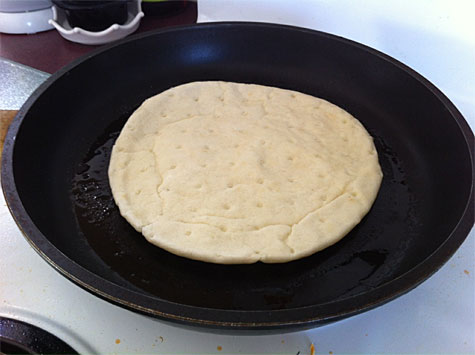 Cooking up the naan bread

The finished result smelled and tasted delicious! I had mine on a plate like this while Mike put his items together to form a ‘naanwich’ (like Wok Box’s ‘naanwiches’). 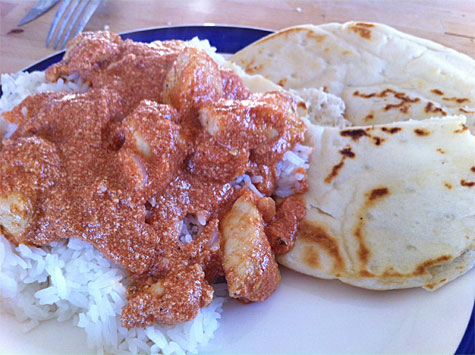 The recipe was super easy to follow and didn’t take that long to make.

We had delicious leftovers for two days following.

The only complaint I had was that it appeared the yogurt kind of curdled… at least I think that’s what happened. I’m no expert in food terminology but I believe that’s what it was. If you look closely at the sauce you can see it kind of had tiny bubble/dots on it – I believe that’s a result of the curdling.

If we try the recipe again we may try using the cream instead of yogurt but I read a lot of recipe reviews where people said they swapped yogurt for cream and it was just fine so I think it really just had something to do with the speed at which we stirred/mixed the yogurt with the butter and rest of the ingredients and also how long we kept it simmering because it’ll curdle when the sauce is overcooked.

Of course don’t get me wrong, the sauce still tasted great! If I’m being very honest there was a hint of a sour taste in it and I do believe that was because of the curdling but it was nothing major. Really the curdling was just an appearance problem so if we were selling it at a restaurant people would probably question the dots on the sauce but if we’re having it at home, it still tasted good.

Have you ever made butter chicken?? Will you try now? Use this recipe! Try with yogurt! It’s a tad healthier than all the cream, but careful for the curdling. I guess if cream is overcooked it would also curdle so either way, careful with overcooking the sauce in general. Maybe instead of 30 minutes try 20 minutes of simmering?

Let me know if you do end up making it! We enjoyed this quite a bit so we’ll likely be making it again in the near future! :)

Linda Hoang is a Canadian blogger based in Edmonton, Alberta, who writes about travel, food lifestyle and pet topics. She's also a seasoned social media/digital strategist with a journalism background. Linda loves exploring the world with her husband Mike, eating their way through cities, supporting local businesses, and photographing Instagrammable Walls. She is the founder of the Edmonton International Cat Festival and a fur-mom to two cats and two dogs.
PrevPreviousRecap: Sobeys’ Sensory Workshop
NextClicks of the Day: July 2, 2012 Weekend Edition!Next