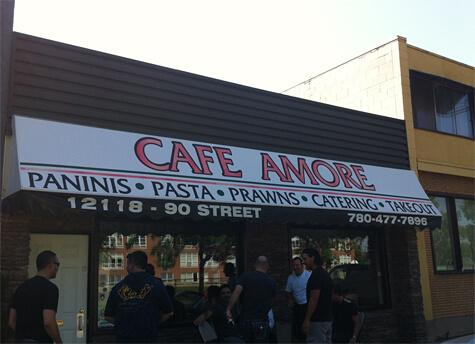 Last week my mom took me shopping and out for dinner to celebrate my birthday early (her schedule is very difficult for us to spend time together on my actual birthday/birthday week at the end of the month). I ended up choosing Cafe Amore Bistro at 12118 90 St. as our restaurant of choice – based on a glowing recommendation by @GlobalJesus (that recommendation was confirmed as Cafe Amore boasted an impressive 93% on Urbanspoon).

I was really looking forward to trying out the place and I think maybe I was too excited and that’s why it ended up being slightly disappointed… But let’s back up! 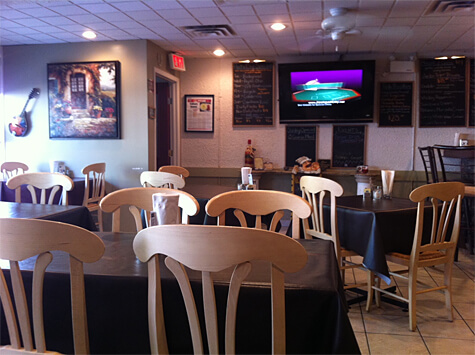 The place is hidden (those who enjoy it call it a hidden gem) in a residential neighbourhood north of 118 Avenue (12118 90 St.) We would never, ever have noticed the restaurant (known it even existed) if we hadn’t been told/weren’t driving to it on purpose. It’s not exactly a place you stumble upon unless you live in the neighbourhood.

It wasn’t too busy when we got there but almost as soon as we sat down it filled up – fast! Cafe Amore is a small, cozy restaurant. It feels very Italian, like you’re in a cafe in Italy. They have photos posted across the middle of the room showing scenes of I’m assuming the family (owners) in Italy, which adds to the nice atmosphere. Our server told us the restaurant has been around for about a year and a half. I told her they have great reviews on Urbanspoon and that’s one of the reasons why we came that night – she thanked us. 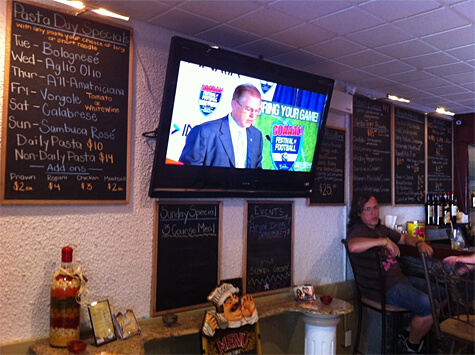 Chalkboard menus on the walls of Cafe Amore.

There aren’t menus provided at the tables at Cafe Amore. They write down food options on chalkboards hanging on the wall. Our server was very friendly and ran through their daily pasta specials for us. She told us they didn’t have mussels that day (tragic, because reviews I had read about Cafe Amore just raved about their mussels) so we couldn’t try that. They have two daily soup options (today’s was minestrone and another kind that slips my mind at the moment). If you order the pasta special for the day it’s only $10 for the dish (plus $2-$5 extra if you want to add chicken, shrimp, etc.). If you order a pasta listed that’s not the special for the day then it will be $14 (plus additional for extra meats). So the price point is not bad at all!

Maybe we took too long to decide and put in our order so our order ended up falling behind other tables because it took awhile for our food to come out, which is difficult when you’re hungry and all the tables around you are getting their dishes before you are. So that wasn’t fun. 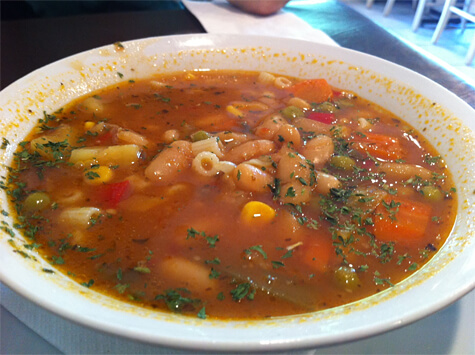 We ended up ordering a minestrone soup to start/share ($6). It was alright, but nothing spectacular. 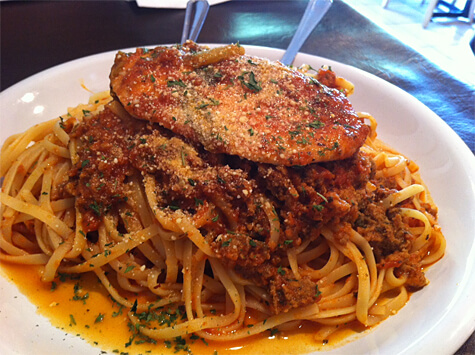 We ordered the daily special which was Bolognese ($10) – plus chicken ($3). The daily special comes with short or long noodles (penne or linguine were the two options were got), I hadn’t realized the Pasta Pescatore featured linguine so I ordered the Bolognese with linguine as well so both of our dishes ended up being very similar looking.

I typically preach about how I hate dishes that come out looking teeny tiny – I love quantity when it comes to food (that makes me sound like a big piggy but it’s true!) so I will say this about Cafe Amore: Boy, do they give you quantity. Heaps and heaps of pasta, you could say mountainous – piled our plates. The restaurant gets big plus points for that – it would be great for sharing pasta family style because there’s no way myself or my mother were going to be able to finish our dishes in the one sitting.

Problem for me when it came to the Bolognese with chicken was that the $3 additional chicken was literally just one, tiny piece of flavourless chicken. You put that on top of a mountain of pasta then it really makes it disappointing. There was definitely not enough chicken to portion appropriately with the amount of noodles and the small piece of chicken didn’t taste very good anyway so I was pretty disappointed. 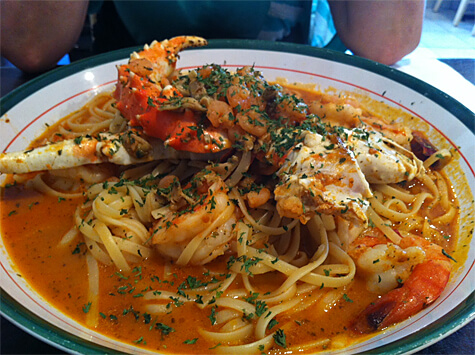 We also ordered the Pasta Pescatore which includes linguine noodles, King Crab, jumbo prawns, mussels, baby shrimp, baby clams and tomato sauce ($25). The Pasta Pescatore came with two King Crab legs and a bunch of the baby seafood. I loved the tomato sauce and how it tasted mixed in with the seafood juices. I was sipping her dish’s sauce throughout most of the evening. Since the noodles were the same as the one I had, that didn’t particularly stand out and I don’t really like when restaurants call shrimp or prawns ‘jumbo’ when really they’re just normal sized. (That’s just me nitpicking though). It came with heaps of pasta noodles – definitely a shareable dish among two people. The Pasta Pescatore had way more meat to noodle ratio than my Bolognese and tasted a lot better so I give good ratings to that dish (although $25 is a bit higher than what I’d usually prefer to pay for a dish… although it is seafood so that higher price point is be expected).

Maybe it was the minestrone soup to start, or all the water I drank while waiting for the dishes to come out, but overall I just didn’t enjoy my meal. My mother also didn’t really enjoy hers (though I thought her seafood dish was significantly better than the bolognese!)

The amount of noodles you get for the reasonable price at Cafe Amore is fantastic. You definitely get solid bang for your buck with the heaps of pasta. While the service was a bit slow, the servers at Cafe Amore were very friendly and the cozy, homey atmosphere of the little bistro was really pleasant. So all of those things were great… I just wasn’t really satisfied with the Bolognese. I’d definitely had better pasta and way better chicken before.

Perhaps the place was too hyped up and that also contributed to its downfall (in my eyes). @GlobalJesus suggests I go one more time before I make my final decision on it. I would like to return to give it a second try but it’s also far from home and since the first time wasn’t truly spectacular, I have doubts as to whether I’ll be making my way back.

I feel pretty lukewarm about Cafe Amore but I’d recommend, as I often do, that you at least try it if you’re interested in trying different local restaurants. The people who gave Cafe Amore 93% on Urbanspoon can’t be wrong right? The place has a very nice, welcoming feel to it, the servers were very friendly and at least the Pasta Pescatore was yummy! Maybe it was just an off night or something for my overall experience. I still always respect local, family-run businesses and try to support them (at least the one time), so you should too!

So have you been to Cafe Amore?! What did you think??

* UPDATE: Since my first visit, I’ve been back to Cafe Amore many, many times. It’s become a favourite for lunch (Get the daily pasta specials!!) and I cannot say enough good things about this restaurant. Read one of my ‘revisted’ reviews here.

Linda Hoang is a Canadian blogger based in Edmonton, Alberta, who writes about travel, food lifestyle and pet topics. She's also a seasoned social media/digital strategist with a journalism background. Linda loves exploring the world with her husband Mike, eating their way through cities, supporting local businesses, and photographing Instagrammable Walls. She is the founder of the Edmonton International Cat Festival and a fur-mom to two cats and two dogs.
PrevPreviousSocial Media Column: Flood of retweets helps homeless
NextClicks of the Day: Wednesday, July 18, 2012 Edition!Next