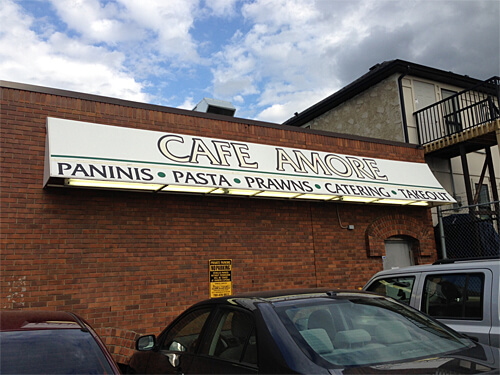 I originally tried Cafe Amore Bistro at its old location hidden in Alberta Avenue last year with my mom, after a glowing recommendation from @GlobalJesus and an impressive ranking on Urbanspoon (currently it sits at 91% When I checked last year it was at 93%). My experience wasn’t the greatest (read the review here), though at the time I did say their pasta special is great bang for your buck.

Still I had been meaning to revisit Cafe Amore – especially after they switched locations a couple of months ago. Now the family restaurant is located at 10807 106 Avenue- just a bit west of Chinatown / north of downtown. The final push to get me there was, you guessed it, the continued glowing recommendation by @GlobalJesus! (Cafe Amore – if you’re reading this, he’s your biggest fan. Lol) 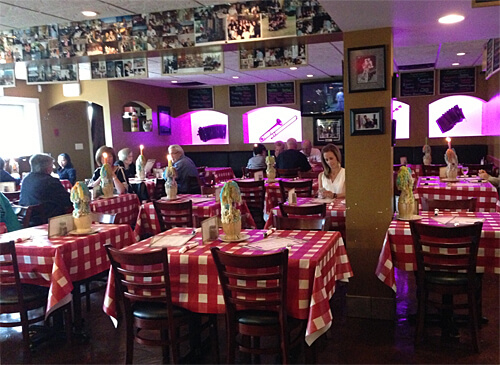 So I must say Round 2 was a lot better! I thoroughly enjoyed my time and the food at Cafe Amore. The place was just starting to get busy when myself and friends Breanna & Kelsey arrived at 6:30 on a Friday night. We didn’t make reservations and I guess you really should on a busy start to the weekend – because the restaurant filled up very quickly and we were able to get a seat if we promised to be done before a reserved table was needed. Fair enough – next time, make reservations! 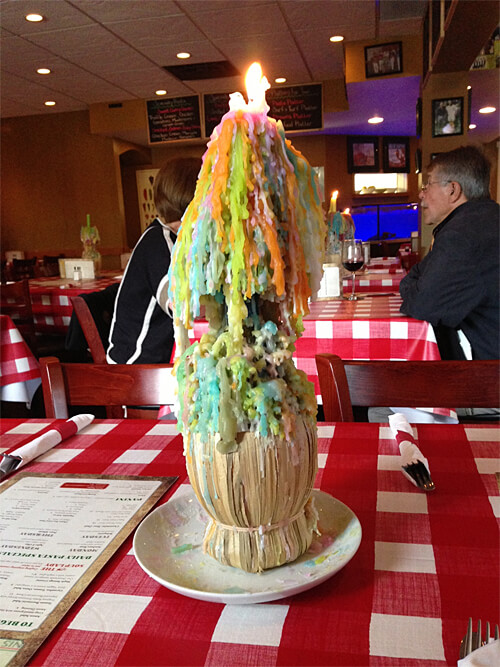 The menu is simple and straight-forward. You’ve got your daily pasta specials, which if you order on the right day, is really incredible value for what you get. If it’s a Friday and you want Tuesday’s special, it costs just a bit more but still very affordable as far as heaping piles of pasta dishes go.

Last time I went with my mom we wanted to try the mussels but they had run out! This time around I ordered the mussels and… success! A delicious mass of hot mussels in tasty rose sauce ($14) came out and satisfied everyone at the table. 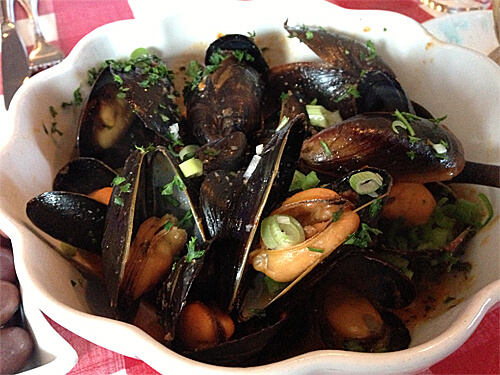 Kelsey ordered the Tomato Bocconcini Salad (Roma Tomatoes layered with Imported Bocconcini Cheese, $11) which we also took some bites out of. I love bocconcini and tomatoes and this salad was no exception. 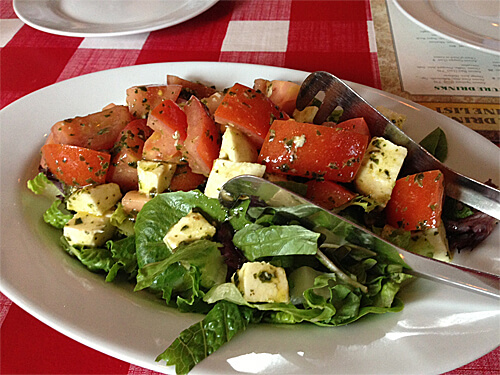 She also ordered the Prawns in White Wine Lemon Sauce ($18) which was less of a hit I think. You get eight stand-alone prawns for $18 which definitely is not great value. You do have the option of getting the prawns in pasta for an additional cost, which might have been better. I just didn’t think the prawns alone were that great, nor were they worth the price. 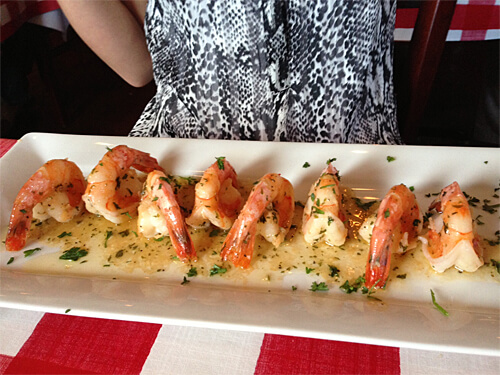 My order of Vongole (Baby Clams in Tomato Sauce on Linguine) was terrific. It was the Friday special so it was only $10. See the heap below? Only $10! And it was very good. Last time I had their pasta with chicken and I found the chicken to be somewhat bland but the baby clams in this dish were divine and you get so much – I obviously packed it up for lunch the next day. I love leftovers. And to have enough for leftovers when your dish is only $10, that’s pretty great. (Although remember I did stuff myself with mussels earlier too). 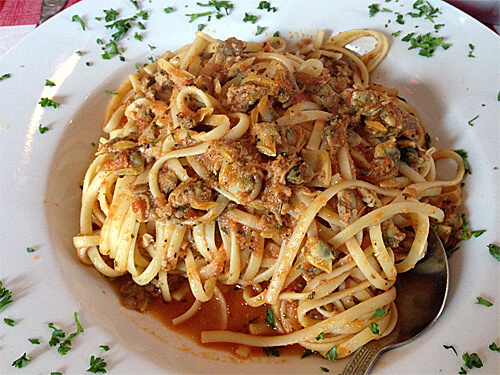 Breanna ordered the Aglio E Olio (Extra virgin olive oil and minced garlic with pepperoncini spice with Baby Shrimp) Since the Aglio E Olio wasn’t the Friday pasta special, it cost $14 instead of $10. And since she added baby shrimp, it cost an additional $4. Compared to Kelsey’s prawns for $18, Breanna definitely got the better end of the deal but I still thought my choices were the tastiest and best value of the night. ;) 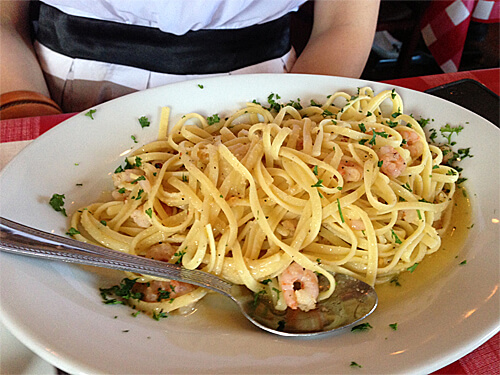 If you’re getting the daily pasta special, you really can’t beat the value for the taste and gigantic portion size. That was one of my positive comments in my original review and it continues here – you just get heaps and heaps of delicious pasta!

The atmosphere at Cafe Amore is also terrific. We all commented that it felt like we were in Italy – and that is the same kind of feeling I had at their old location too, so it’s great to see that wonderful ambience carried over after their move. It just feels like you’re at home. It’s very authentic and just a very charming feel overall.

Everyone is also super friendly – from the owner shaking everyone’s hands as they enter – to our lovely server. And the food came out very fast. (I wonder if this is because we were sitting in a table that needed to be ready for another group lol, either way, hooray!)

Their new location is a lot bigger and I think a lot easier to find. The old one was very much hidden away in a residential area of Alberta Avenue. This closer-to-downtown spot should bring in a lot of hungry traffic for them.

The quality of the food overall was fantastic and the atmosphere – even better. This was a far better experience for more than my original visit. I will be back for sure! And now since I’ve gone twice without Mike, I need to bring him for my third visit! :)

So have you been to Cafe Amore?! What did you think?