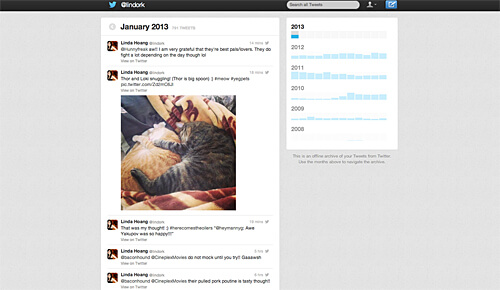 “We know lots of you would like to explore your Twitter past. Today, we’re introducing the ability to download your Twitter archive, so you’ll get all your Tweets (including Retweets) going back to the beginning.”

I did have the Twitter archive option and excitedly went to download my tweet history only to discover that… hey, this is not an archive of all my tweets “going back to the beginning” as Twitter had originally promised! 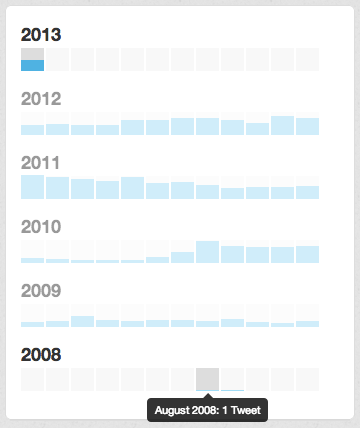 Collection of tweets by year and month.

I know for a fact that I signed up to Twitter in the summer of 2007. I know this for two reasons. 1) If I plug in my name on a number of different websites whose mission is to answer the question ‘When did I join Twitter?’ – each one tells me June 30, 2007. 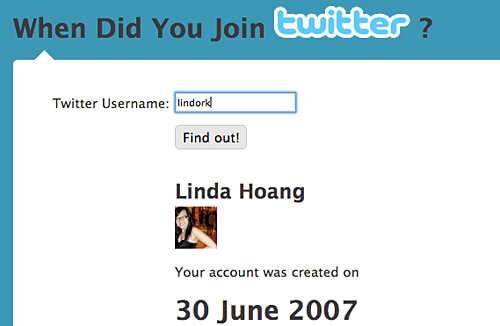 And 2) I distinctly remember joining Twitter for the sole purpose of tweeting to Jamie Goodwin, a So You Think You Can Dance Season 3 contestant who – at the time – had just started experimenting with this ‘Twitter thing’ and following along with her thoughts during the competition was a very cool and exciting thing to do at the time. (I was really into SYTYCD at the time). And when was So You Think You Can Dance Season 3? The summer of 2007!!!! 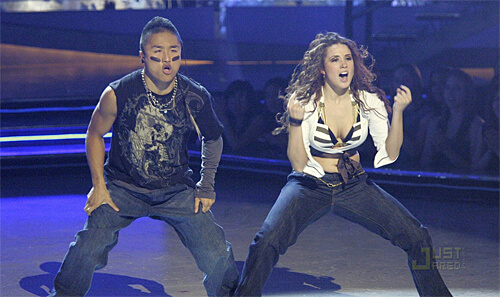 Hok Konishi and Jamie Goodwin perform during So You Think You Can Dance Season 3.

My first tweet was certainly NOT a link to my fansite for Mark Kanemura (a So You Think You Can Dance Season FOUR dancer).

If you are promising a complete record of all a user’s tweets “from the beginning” – then I expect just that.

I was so disappointed about this that I rushed to write a blog post. According to Mike, Twitter Archive is clearly a new service and there are going to be some kinks to work out. Well I hope they work this kink out soon because I am so curious now! :(

The curious thing is Craig Kanalley’s first recorded tweet was in 2008. So was the Wall Street Journal’s Director of Social Media & Engagement Liz Heron. It would appear Smart Brief (and former AP staffer) Joe Webster‘s first tweet was also in 2008.

Did Twitter make 2008 its benchmark for furthest back they’ll go?

If that’s the case – again, they can’t really say that your Twitter Archive will give you all your tweets “from the beginning.”

I would be interested in seeing what local social media superstar Mack Male (@mastermaq)’s Twitter Archive says is his first tweet – since he was a super early adopter, joining back in 2006. If it says his first tweet is 2008 then I will require Twitter to retract their blog statement saying that Twitter Archive will give you “all your tweets going back to the beginning.”

The other weird thing I can’t figure out is my Twitter Archive says I only tweeted twice in all of 2008.

I don’t see how that could be accurate either!?

It is possible that early on I was embarrassed with my tweets so when it was still do-able, I went back to delete some… but I just don’t see how I could have deleted every single 2007 tweet and all 2008 tweets but two? That doesn’t make sense.

All in all, I am disappointed and also confused with my Twitter Archive.

As Twitter Archive continues to roll out to all users, I will be watching closely to see if other people report missing tweets or discrepancies with their Twitter history.

So, have you downloaded your Twitter archive? Does everything appear in order? Was your first tweet goofy? ;)