For the first time, Mike and I went to the Calgary Comic & Entertainment Expo!

We joined our friends Jack and Nicole, who are avid Expo-goers, for a jam-packed day of geeky fun! And I say geeky in the best way.

I think anyone who is passionate about something is a geek about it and that’s a great thing.

Mike and I are geeky about a whole lot of pop culture topics, which makes Expos high on our list of things we like to check out.

It’s convenient then that Calgary is home to Canada’s second biggest Expo, and it’s just a 3-hour drive away!

As far as ‘Travel Alberta’ staycation destinations go – trips to Calgary are a no-brainer.

Checking out the cosplay competition at Calgary Comic & Entertainment Expo 2016.

Our day at the Expo was broken down like this:

We chose not to do any meet and greets or photo ops to save time for other Expo activities (though the Doctor Who fan in me was really itching to get something with Billie Piper and John Barrowman – a.k.a. Rose and Captain Jack from Doctor Who!)

No meet + greet with John Barrowman but we did attend his awesome panel!

I think your Expo experience will vary depending on what’s most important for you.

The panels we went to (Alan Tudyk and John Barrowman) were completely filled, and I met a group of friends in the front row who make it a point to be front row at these panels. That’s their ideal Expo, and I totally get the appeal.

These panels are such a great way to learn more about some of your favourite actors and see them in a really authentic way.

Both Alan Tudyk and John Barrowman had totally different styles of panels (Alan’s was moderated, John’s was led by him), and interacted with fans in different ways. John even broke out in song! (He has a fantastic voice).

On the other hand, when we discovered the LAN Gaming Centre, Mike almost didn’t want to leave!

A gaming Expo is really Mike’s ideal Expo, and even I’ll admit watching a LAN competition live is a lot of fun – quite an experience.

The competition had its own play-by-play announcers and at a few different points the entire audience would jump up from their seats and yell (including us).

Don’t knock it til you try it, it really was a lot of fun!

Then you’ve got the people who dress up and participate in cosplay at the Expo.

I swear, this is where I see some of the most incredible, elaborate costumes I can’t even begin to understand how to make.

You could make a whole day out of people/cosplay watching, and getting pictures taken with your favourite cosplay artists.

It’s really amazing to see some of these characters in your favourite movies, books, comics, TV shows, come to life at expos.

I know I got excited to spot Doctor Who cosplay, and Mike and Jack were excited when they saw characters from their favourite animes.

Mike and Jack with someone from some anime they like, lol.

A big part of the Expo is just browsing and shopping at more than 600+ vendor and artist booths.

You might also have a very particular way you check out all the exhibitors. For example, Mike and I like to go down entire rows from one end of the hall to the other, before winding back down the opposite end.

Our friends Jack and Nicole like to go sort of in vendor squares – ensuring they’ve visited all the booths in one chunk before moving onto the next chunk.

Whatever way makes the most sense to you, a big chunk of your Expo could be spent checking out what the all exhibitors have to offer.

You should go to the Expo with a reasonable expectation to spend a bit of money on vendors.

We dropped $110 on a Doctor Who ‘Mystery Box’ which included a number of Doctor Who-themed items (notebooks, cups, pens, a sonic screwdriver, a pillow, etc.) as well as a mini cardboard T.A.R.D.I.S.

The T.A.R.D.I.S. we really wanted to carry around with us so people would understand better the ‘costumes’ that Mike and I dressed up in, lol.

What Doctor Who goodies do we have here!

We went as the Twelfth Doctor and companion Clara Oswald from Doctor Who. Can’t you tell? Mike even put temporary white colour chalk in his hair to get that Peter Capaldi look.

No one asked us for pictures though (this was not the Expo year for Doctor Who) but we did ask this Eleventh Doctor for a photo!

(His Eleventh Doctor pose is excellent. Cosplay really is an art).

Met up with the Eleventh Doctor!

Food was a big part of our Calgary trip (surprising no one, I’m sure), so although we spent the majority of our Saturday at the Expo which “ate” into time spent trying Calgary restaurants, I was still pleased because the Expo itself has a pretty good food truck offering.

Line-ups for the food trucks.

Food truck line-ups are inevitable, but it actually moved pretty quickly and after getting our food (tacos, rice, and Vietnamese submarines), we sat down on the lawn to do more cosplay/people watching.

Jack and Nicole spend the entire 4 days at the Expo (Thursday through Sunday) and having a few more days really does help make the experience less intense.

Mike and I only went for the Saturday so I felt like it was a really packed day because we wanted to make sure we did as much as we could in a short amount of time.

Depending on your Expo preference (panels, meet and greets, just vendor shopping and people watching), how many days you need to go will change, but I know for our friends they found great value in their 4-day pass.

Overall we had a great time at the Expo and a fantastic trip overall to Calgary. (Check out the food recap I did for our weekend eats here). 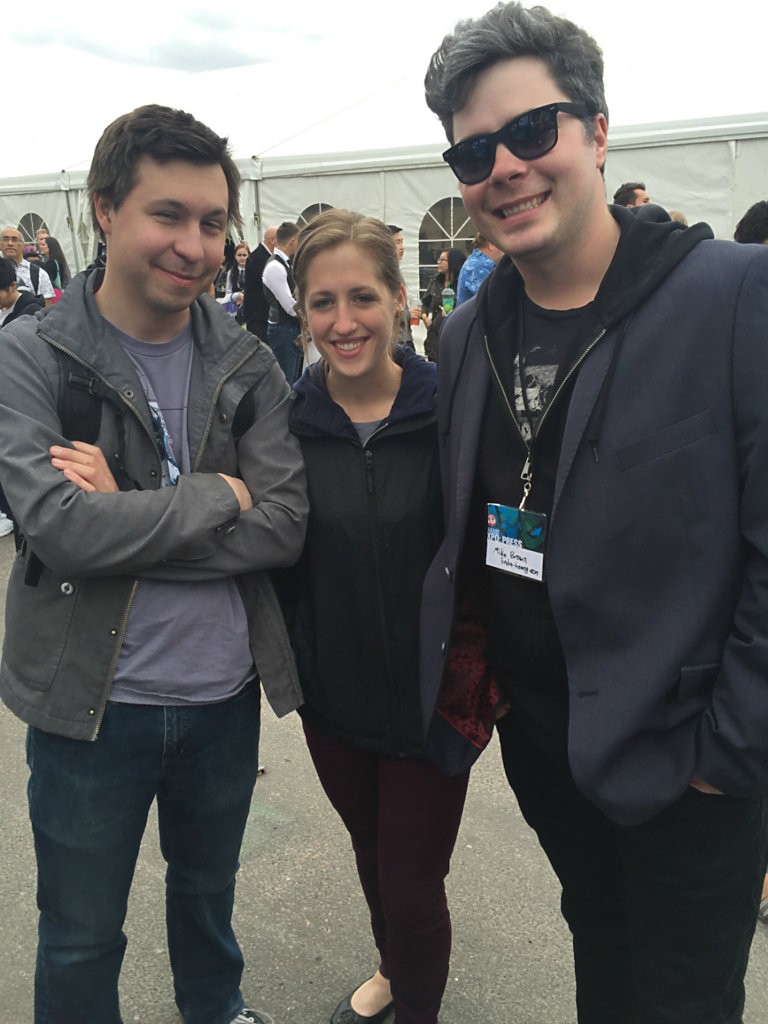 Friends and fun at Calgary Expo!

If you’ve been to the Edmonton Expo, I find the Calgary one is very similar (it’s put on by the same group) but Calgary’s is just much larger. Take Edmonton’s and double, maybe triple it, and that’s Calgary’s, but very similar format, exhibitors, etc.

It’s definitely worth the drive down – in fact, make it a whole weekend trip and check out other Calgary attractions/restaurants too!

If I were to offer a few tips to make the most of your Expo experience, it would be:

Maybe our next Expo we’ll try our hand at a more elaborate DIY cosplay!

So have you been to the Calgary Comic & Entertainment Expo?

What did you think?! What are your go-to/must dos?

Disclaimer: I will always provide my 100% honest opinion on this blog. We received Saturday media passes to attend the Calgary Comic & Entertainment Expo. This has no impact on opinions stated in this post.

Linda Hoang is a Canadian blogger based in Edmonton, Alberta, who writes about travel, food, lifestyle and pet topics. She's also a seasoned social media/digital strategist with a journalism background, the founder of the Edmonton International Cat Festival and co-founder of Stop Race Based Hate, an online anti-racism education tool. Linda loves exploring the world with her partner Mike, eating their way through cities, supporting local businesses, and photographing Instagrammable Walls. Linda is a fur-mom to two cats and two dogs.
PrevPreviousSocial Media Notes (#114) – Links for the Week of May 2 – 8
NextSocial Media Notes (#115) – Links for the Week of May 9 – 15Next