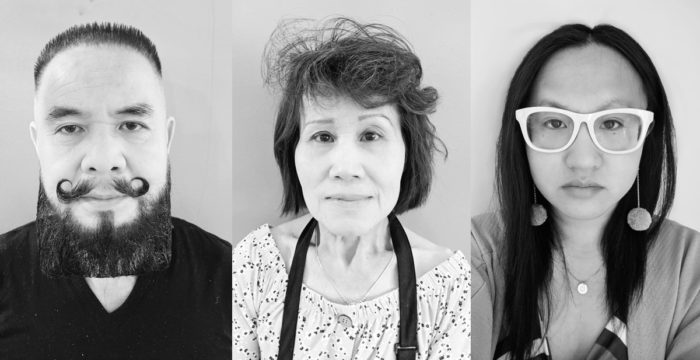 It pains me to think of the casual and overt racism my parents (pictured above, owners of King Noodle House Pho Hoang in Edmonton, Alberta) have experienced—but could not act on, as they tried to fit in as model minority immigrants in Canada, or simply because their English wasn’t strong enough to rebut.

Sometimes I think it’s better they aren’t as versed in the language so they aren’t as impacted by racist, xenophobic or stereotypical remarks but I also know even though they may not understand the words, they have *felt* the hate. You feel it.

Recently, I’ve been reflecting on Asian racism I’ve long brushed aside—when people confuse me with another Asian woman, when people make jokes about how we all look the same, that we eat weird food, when people pronounce my last name wrong, and pandemic jokes too.

These all feel like small things, especially compared to the violent acts that have occurred against BIPOC communities—especially recent attacks on the Asian community. But they swell.

Hate crimes against Asian-Canadians have increased 600-700% since the start of the pandemic compared to the previous year. (CTV News Source) Some people truly blame Asians for the pandemic. Letting casual racism pass leads to increasingly overt and violent acts.

You can’t cherry pick what aspects of a culture you love or support. All people should be valued and should feel safe regardless of (the list is long). And absolutely no one should be targeted because of their race.

I am proud to have worked with Jessie Cayabo of Bonafide Media & PR & Carmen Cheng of Food Karma Blog on #StopAsianHateAlberta—this collective show of solidarity, standing united with other Asians in Alberta’s food community against race-driven hate crimes. 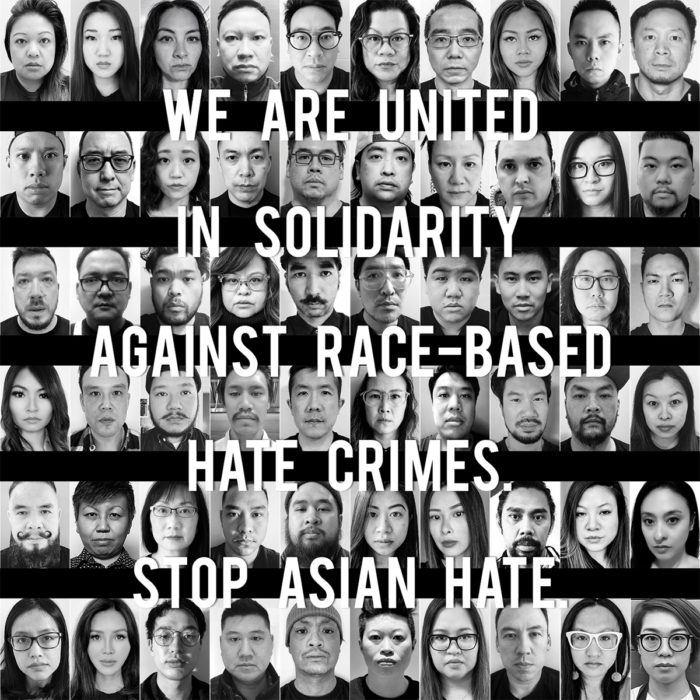 This campaign was sparked by the March 16, 2021 murder of eight people including six Asian women in Atlanta. When Jessie reached out to Carmen and me to just chat about the racist events that have been occurring, the idea emerged of creating space to help others who felt the same angst make a collective unified statement. In just a few days, we were able to rally 60+ food and hospitality industry professionals to be part of this campaign—sharing graphics featuring our faces, along with text detailing social justice concerns and ways Albertans can take action and stand against race-driven hate.

“These are heinous attacks. We are shaken, saddened, and angry. We ask YOU—our neighbours, partners, customers, followers, and our communities—to stand with us.”

If you are part of Alberta’s Asian food community, or are an ally in Alberta’s hospitality/food  industry, we are starting a database to help coordinate, inform of future initiatives and other local, anti-racism information or actions, and move forward in solidarity. You can submit your contact information at this form.

We have shared six actions Albertans can take to denounce and eliminate race-based hate:

I’ve also listed more Canadian resources and actions at the end of this post.

I have been using my online platforms to raise awareness and action against racism, and taking small steps to uplift underrepresented groups in my community, and will continue to do so. I hope you will too. 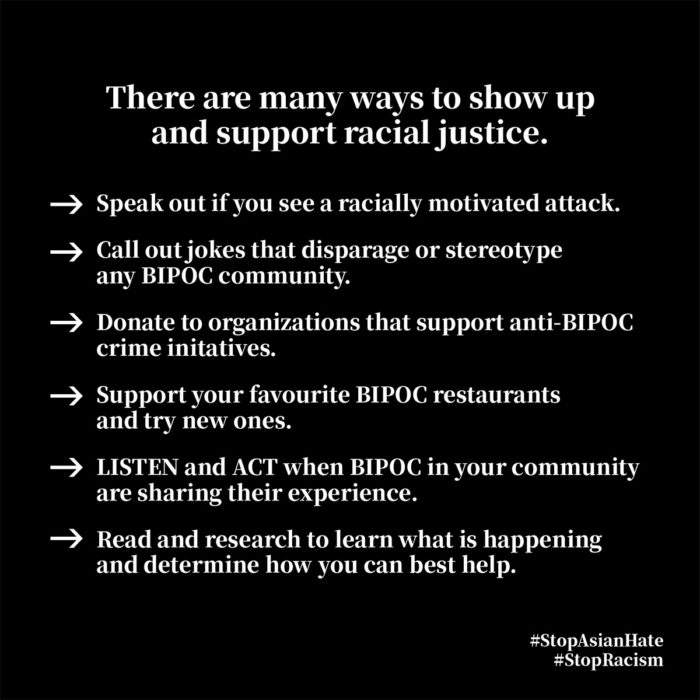 Thank you to Act 2 End Racism as well, for organizing a truly moving anti-racism rally this weekend in downtown Edmonton, coinciding with anti-racism rallies across North America.

Inspiring speakers representing diverse BIPOC communities, many of which have long been and recently come under attack, shared emotional and hopeful stories that strengthen our collective resolve to end hate crimes, prejudice, xenophobia and violent acts against people based on their race and identity.

“My identity makes me a target for hate.”

“I’m scared when my grandma goes to the store.”

“My Muslim sisters have been attacked while waiting for transit.”

“Racism and hate must end.”

These are just a few of the powerful statements shared during the Edmonton rally.

Thank you to everyone who shared my #StopAsianHateAlberta posts (on Instagram, Twitter, and Facebook) as well as sent messages of support and solidarity, and pledged to call out hateful behaviour.

Together, I hope we can #Act2EndRacism, racialized violence and injustices many BIPOC communities experience in many ways, every day, everywhere.

Although #StopAsianHateAlberta launched from a food and culinary perspective, I look forward to seeing how the anti-racism movement here in the province grows beyond this as well, and the impact our united voices and collective actions will have on creating a safer, more equitable world where no one is targeted because of their race.

Below I’ve linked some Canadian resources for further anti-racism education and donations:

There are countless news articles about increasing Asian hate crimes in Canada. Read them. Believe them.

STOP AAPI Hate also suggests you ask your workplace, school, faith-based institution, unions and community groups you may be involved with what they are doing to denounce racism.

Call on these organizations to support and take action.

Please join us in our call to:

If you live or work in the Edmonton, Alberta area, or care about Edmonton content, sign up for my hyperlocal newsletter to get weekly recommendations on things to do, eat, and know this week (in the Edmonton area), plus more exclusive content. You can sign up for a free or paid subscription.

(You’ll get the option to select free or paid after you enter your email).

Guide to Black-Owned Restaurants in Edmonton

Linda Hoang is a Canadian blogger based in Edmonton, Alberta, who writes about travel, food lifestyle and pet topics. She's also a seasoned social media/digital strategist with a journalism background. Linda loves exploring the world with her husband Mike, eating their way through cities, supporting local businesses, and photographing Instagrammable Walls. She is the founder of the Edmonton International Cat Festival and a fur-mom to two cats and two dogs.
PrevPreviousLindork’s Lists #57 – What To Do, Eat, And Things To Know This Week (Non-Subscriber Version)
NextCityline: Unique and Sweet Treats That Ship Across CanadaNext