Review: The Keg Steakhouse Winter Grill Menu + Enter to Win a $100 Gift Card to The Keg! 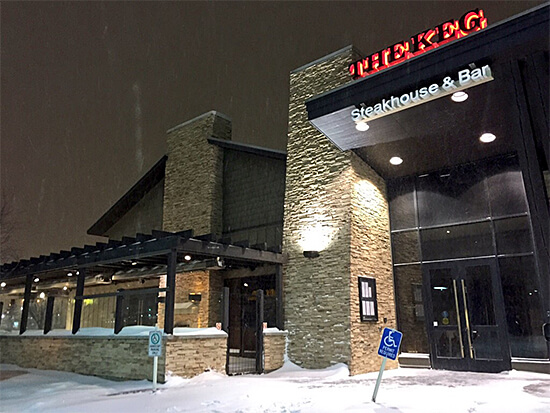 On Thursday, I was invited to try The Keg Steakhouse’s new Winter Grill Menu at their South Edmonton Common location. Thursday also happened to be the big Edmonton snow storm day – the biggest dump of snow we’ve had in awhile (it’s been a really nice winter, let’s be honest!) Needless to say, it really did feel like winter so the timing of trying out the Winter Grill menu was actually quite perfect.

Read on for my recap and also check out the bottom for details on how to enter to win a $100 gift card to The Keg so you too can try the Winter Grill menu! 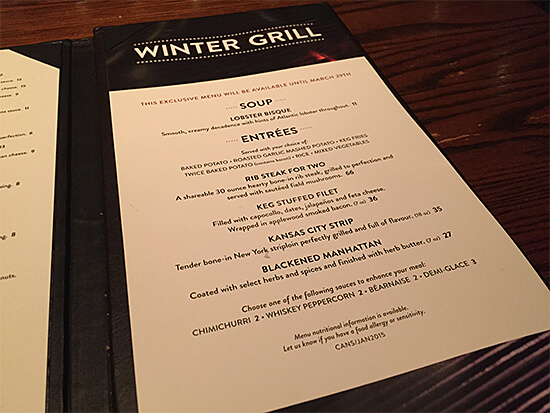 The Winter Grill Menu features a new lobster bisque and four specialty steaks. It’s in addition to The Keg’s already tasty regular menu and is available until March 29.

I’ve been to The Keg several times over the years and have always had good experiences (my go-to is always their Prime Rib Classic, but a few weeks ago I also tried their chicken, which is also good!)

For this night, my friend Brandi was my date. Brandi has also been going to The Keg for years – in fact it’s her mom’s favourite birthday restaurant for the past several birthdays Brandi’s family gets together to do a fancy night out with their mom at The Keg. Basically, we were really excited to try this new menu!

Despite the snow storm, the dining room was packed. I shouldn’t be surprised because I don’t think I’ve ever been to a Keg that hasn’t been packed. They’re doing something right because they’re always busy!

Our server was named James and was very, very good. He was super attentive, very friendly, and seemed to have a tidbit about everything! Knew what paired well with what, what the different sauces tasted like, and had lots of recommendations for us. 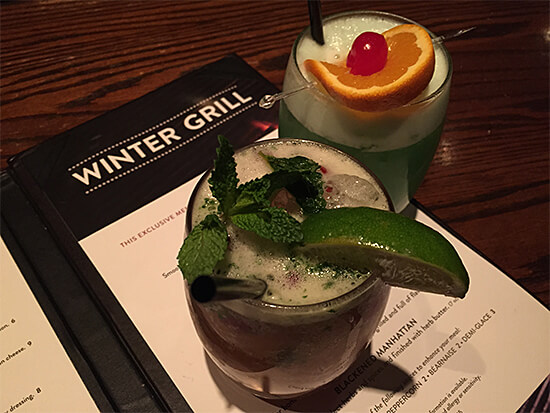 Before we hit the food, we started with two fun cocktails – a Blue Hawaiian ($6) and a Cranberry Mojito ($6.50). These were great. Very refreshing. 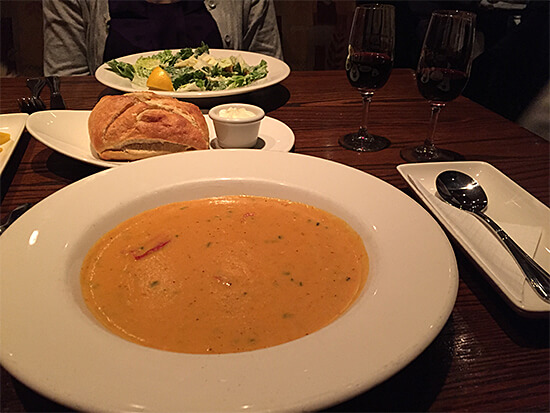 For food, we started with the Winter Grill Menu Lobster Bisque – a smooth, creamy decadent soup with hints of Atlantic lobster throughout ($11) as well as a Caesar salad ($8).

I really enjoyed the lobster bisque. It was what it promised – smooth, creamy, lobster-y. (I’m a pretty good food writer, hey? lol) Break off some sourdough bread to dip for extra texture and tastiness. My only other thought is at the time I felt like there could have been more soup, but in hindsight after stuffing myself with the steak and desserts, the amount of starter soup was just right. 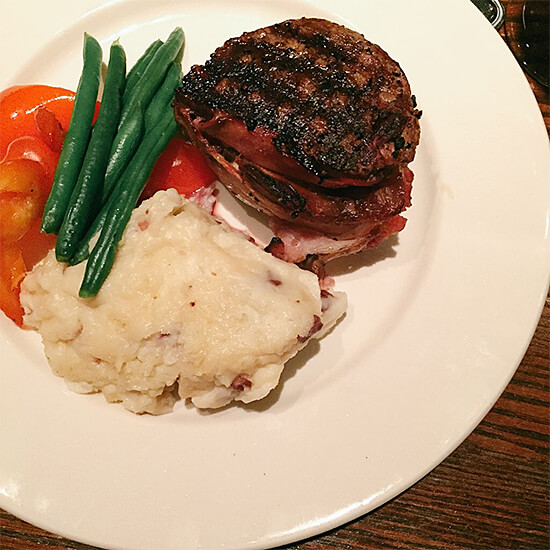 For our entrees, I ordered the Keg Stuffed Filet – which was a 7 oz. steak filet filled with capocollo sausage, dates, jalapenos, and feta cheese, wrapped in applewood smoked bacon with a side of roasted garlic mashed potatoes ($36). 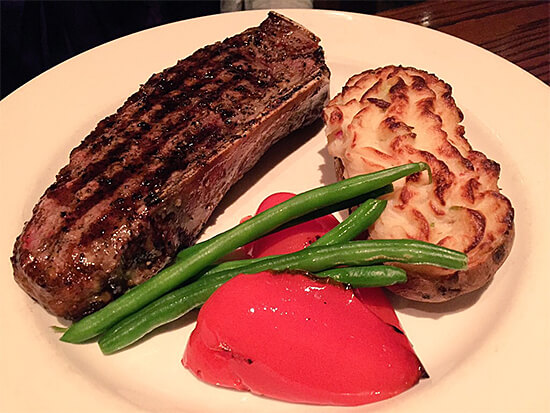 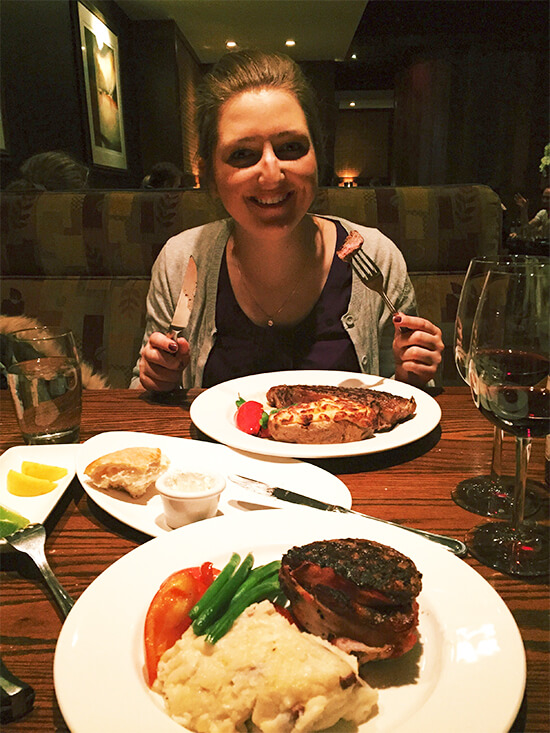 We both thought our dishes were fantastic. I’ve never had a stuffed steak before – in fact I’ve never really heard of that being done before – but it should happen more often because it is delicious. The combination of slightly hot sausage, with the dates, hot jalapenos and cheese, just worked. Though the sausage was more like ham slices not what I was expecting when he said it would be a sausage. The steak was pretty sweet, which I don’t normally associate with steak, but I loved it. Brandi’s strip was massive, super tender and smokey.

You can never go wrong with the potato side options, and though generally I think The Keg’s vegetables always seem to be a little underdone, tonight was more done than what I’ve had in the past so I was happy about that! 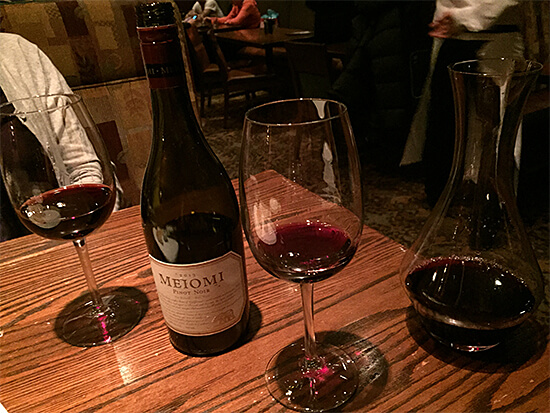 Throughout the night we also had a chance to sample some wines. The Keg just started their Wine on Tap program, so they were excited to show that off. I actually don’t like wine so I felt bad I didn’t really enjoy the ones we tried. Brandi doesn’t really like wine either so we weren’t really the best wine connoisseurs for this kind of sampling. If you’re into wine, I think you’d probably love what they have to offer! We also tried a “full bodied light body” (which James said was a funny oxymoron) pinot noir Meiomi from Sonoma Valley. Try that one! (You can also buy that one at Costco). 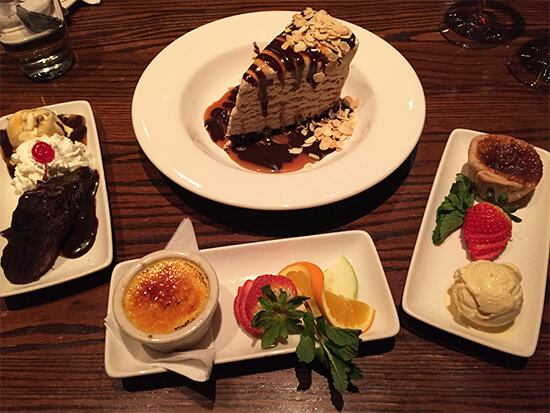 We finished the meal with The Keg’s famous Billy Miner (Mud) Pie – mocha ice cream on a chocolate crust with hot fudge, caramel and almonds ($6) and a trio of ‘Sweet Minis’ (that turned out to not be all that mini, especially if you order all 3!) a Butter Tart, Fudge Brownie and Mango Creme Brulee ($3 each or $8 for all three). As with wine, I am not really a dessert person, and after having stuffed myself with the bisque and steak, I was already pretty full – but I think for a dessert person (like Brandi) this was the perfect cap to a pretty great meal (she literally devoured the Mud Pie. by herself. no drops left. lol)

During the dinner my pal Monica asked if the lobster bisque was gluten-free.

@lindork @TheKeg you know, these last few years they really stepped up their game. Time to check out that menu…is it #gf soup?

When I asked James, he said unfortunately no – but then proceeded to tell us that 90% of The Keg’s regular menu can be made gluten-free. They recognized a few years ago that many of their customers were coming in with gluten intolerances/had celiac disease so they made it a priority to take a look at everything they made and see how they could make it work to be gluten-free. Pretty commendable! 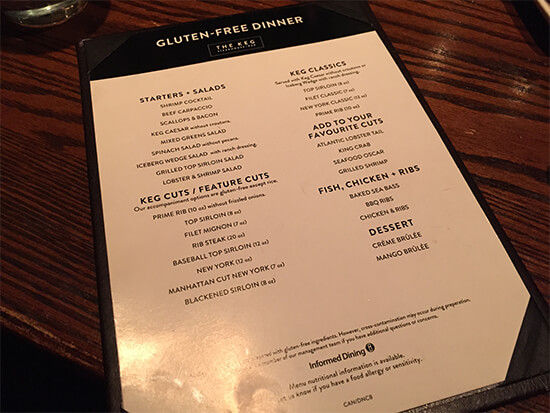 Overall, we really had just the best time. The service was wonderful. The atmosphere was great. I had never been to the South Common location and I have to say it’s easily the best and biggest. High ceilings. Nice room. Really cool!

The price points at The Keg, and especially with this Winter Grill menu, are not cheap. You couldn’t do this kind of a dinner every night, and generally, I don’t think people do. People come to The Keg for special occasions and if you are coming before March 29, I urge you to try something off this Winter Grill menu (and if not, please do get the Prime Rib Classic. It’s my favourite there! lol) But it won’t be a cheap night out – so just know that going into it. Will it be worth it? Yes! Great food, great service = worth the money, but certainly not something you could swing all the time. I honestly believe The Keg continues to do so well because not only is their food good/consistent, but their service is fantastic. Do not underestimate how much good or bad service can affect someone’s dining experience!

Okay, so that was the recap, but now for the real fun!

To enter, do one or all of the following!

I will randomly draw a winning entry from all entries after the contest closes on Wednesday, February 11, 2015 at 10 p.m.

Please note comments need to be moderated so if you don’t see your comment appear right away, don’t worry!

Thanks and good luck everyone!

CONGRATULATIONS TO LISA P. FOR WINNING THE $100 GIFT CARD!

Thank you to everyone who entered!!! Stay tuned for more fun giveaways.

Linda Hoang is a Canadian blogger based in Edmonton, Alberta, who writes about travel, food, lifestyle and pet topics. She's also a seasoned social media/digital strategist with a journalism background, the founder of the Edmonton International Cat Festival and co-founder of Stop Race Based Hate, an online anti-racism education tool. Linda loves exploring the world with her partner Mike, eating their way through cities, supporting local businesses, and photographing Instagrammable Walls. Linda is a fur-mom to two cats and two dogs.
PrevPreviousAlberta Primetime Pop Culture Panel (February 4, 2015)
NextGiveaway: Pair of tickets to 2015 Edmonton Winefest (valued at $150)Next