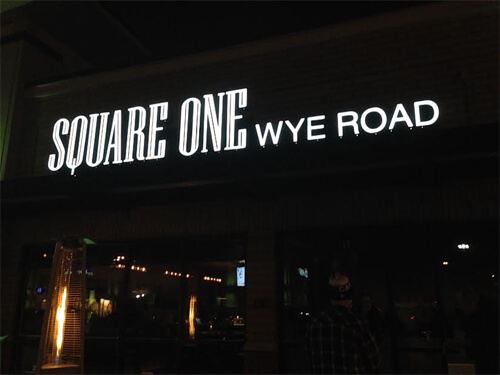 On Friday I was very excited to go on a double date and try Sherwood Park’s newest restaurant Square One Wye Road (#32, 993 Fir Street). I had heard a lot of buzz for it last month when they held their grand opening (but they officially opened mid December) and the reviews online have been fairly positive, plus a lot of the dishes on their menu sounded really interesting! Unfortunately my experience did not match up with the majority of visitors it seems. 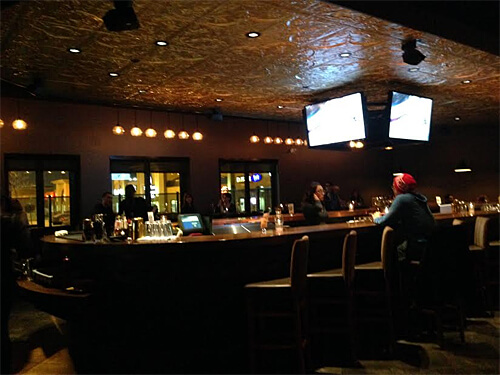 Inside Square One. The space is an open, one-room concept.

Square One has an open, one-room concept, which is really interesting and makes for a pretty cool atmosphere. The restaurant says it’s a “contemporary speakeasy” and its menu is locally inspired – which is always great. 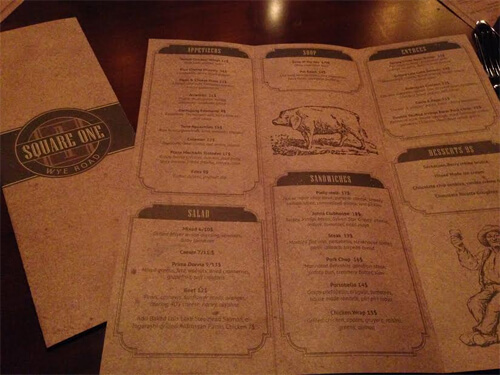 The menu at Square One.

I was pulled in when I checked the menu out online – ‘butter chicken’ wings? blue cheese mussels? pot roast soup? These all sounded so intriguing! The dishes looked great too – but unfortunately, the flavours really fell flat for myself, Mike, and our double date night couple Denise & Tony. 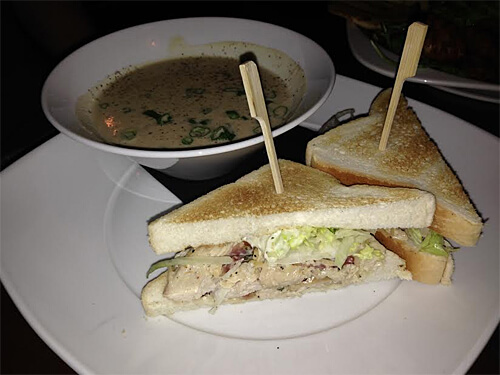 Mike actually had the most positive review to give to his John’s Clubhouse (turkey, Irvings bacon, sylvan star grizzly cheese, lettuce, tomatoes, basil mayo) but at $18, it’s not worth it. You’re given salad, fries, or soup with your clubhouse and he ordered the leek & potato soup. It tasted a lot like just milk. 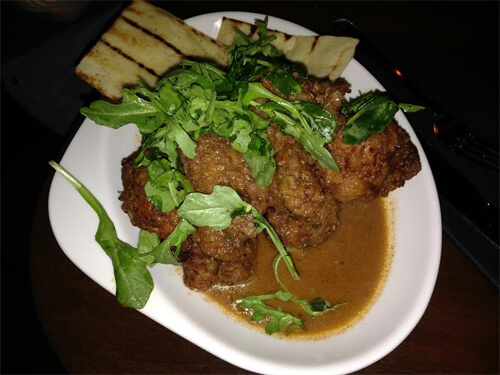 Mike also ordered the butter chicken wings – which again was one of the items that really intrigued us from the start. However the wings were pretty soggy. Not your typical wings texture. 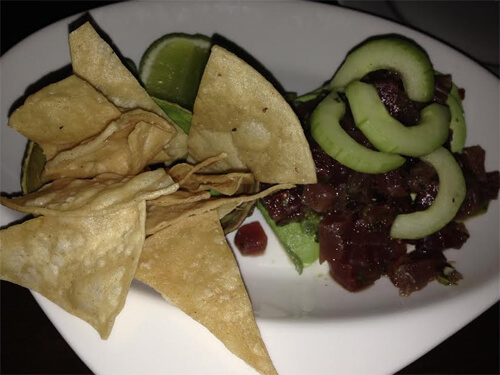 I was excited to order the Tuna Augachile (raw tuna, auguachile, lime, avocado, totopas $16), but was so disappointed with how bland it was. Funnily, the tuna was Denise & Tony’s favourite. They LOVED it. I did not. It was just flavourless. 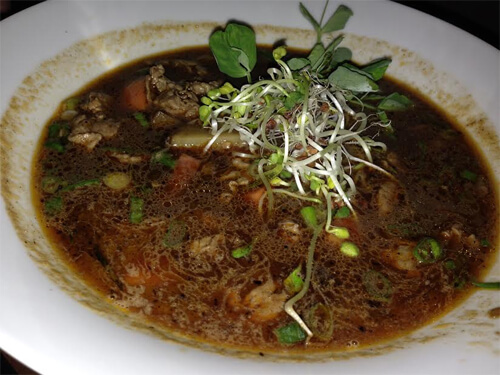 Denise ordered the pot roast soup (beef, new potatoes, root vegetables, herbs & yorkshire pudding – $14) and this ended up being opposite of bland, it was actually full of flavour – the flavours just really didn’t work. It seemed like maybe there had been something wrong with our batch of soup, that’s how odd the punch of flavour you do get, tasted. 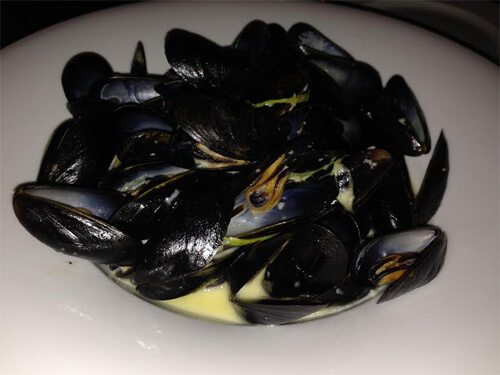 I was excited to share the blue cheese mussels (cambozola, leeks, black pepper – $16) with Denise – but these too were pretty bland, and you barely get any sauce. We also commented about the small size of the mussels, but were later told Square One only uses Ocean Wise mussels so that’s actually quite good to see how the restaurant is supporting sustainable seafood. 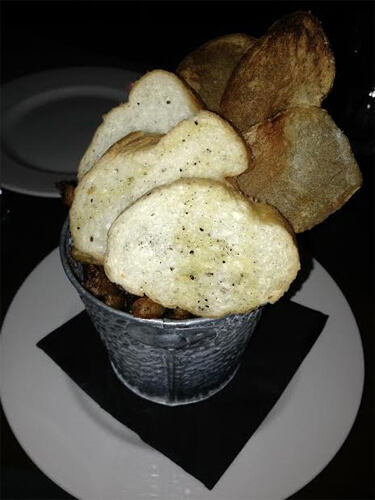 A side of fries, bread, and potato chips (came with the mussels)

You’re given a side of fries, bread and potato chips to accompany the mussels – but again, with little sauce, it was hard to really dip anything. The fries and the potato chips were my favourite dishes of the night – which I don’t know what that tells you. 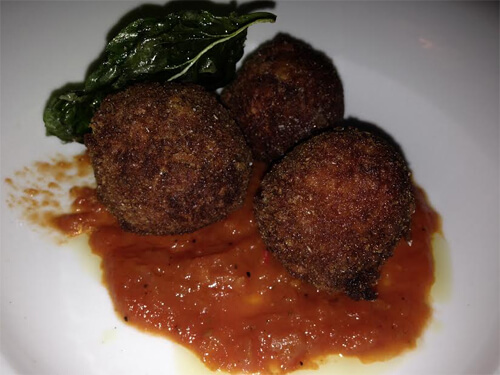 I love arancini and was excited to try this version but the best part about arancini – when the cheese oozes out – didn’t happen here. There was no oozing. I was sad. 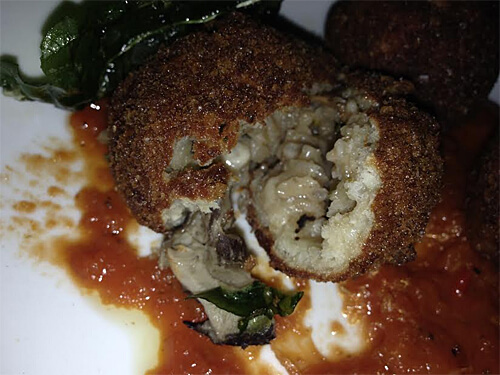 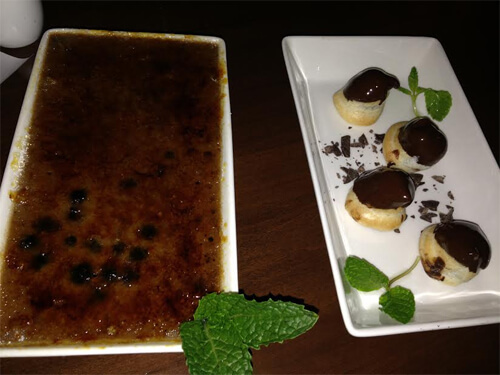 Overall we were all disappointed with the food. Especially at the prices you pay for them.

After we’d settled the bill, Square One owner Marko came out and asked how our experience went. We were honest and let him know, and he was quite receptive to the feedback, and says they’re always looking for feedback to improve and to be better, as they are new. I read somewhere once that you shouldn’t try a restaurant until a few months after it opens to give it time to work out the kinks. Maybe that would apply in this case. Marko said he wanted us to leave with a ‘sweet taste’ and offered complimentary desserts, which we politely declined – until Denise remembered there was a crème brulee dish. She is obsessed with crème brulee and agreed to trying it. Marko and the chef ended up bringing out the Saskatoon Berry Crème Brulee and Chocolate Ricotta Gougeres, along with a champagne + strawberry dessert (unpictured) that was off menu. We all thought the desserts were great, and tasted far better than the previous dishes we had had. Denise and Tony were in love with the champagne + strawberry dessert, and suggested it be added to the menu ASAP. (It’s a more delicate dessert that is harder to mass reproduce, especially on busier nights, Marko explained).

I would say that the service at Square One was great, along with the atmosphere. It has an Earls/Joeys -kind of feel to it, but it’s not a chain. I also love their focus on local & sustainable food, and I like the idea of their menu – but the flavours just weren’t there. It has potential. We didn’t order any alcoholic drinks but their cocktail menu did sound intriguing (similar to their intriguing food menu). Their brunch menu also looks interesting – maybe worth a try there? But overall our dinner experience was seriously lacking and as we live on the far west end of Edmonton, making the trip out to Sherwood Park isn’t something we do too often and I’m not sure we would again for this. I do wish them luck, and I hope they take any negative feedback they are getting to heart – to try and improve.

I love supporting local, and I love that there seems to be more and more local restaurants popping up. But they need to be good. Here’s hoping our experience was a one-off!

So have you been to Square One? What did you think?!

Linda Hoang is a Canadian blogger based in Edmonton, Alberta, who writes about travel, food lifestyle and pet topics. She's also a seasoned social media/digital strategist with a journalism background. Linda loves exploring the world with her husband Mike, eating their way through cities, supporting local businesses, and photographing Instagrammable Walls. She is the founder of the Edmonton International Cat Festival and a fur-mom to two cats and two dogs.
PrevPreviousSocial Media Notes (#19) – Links for the Week of Feb. 17-23
NextSocial Media Spotlight: Conference offers ‘practical, tactical’ social skillsNext