I’m addicted to pho. Because my parents have owned a Vietnamese pho restaurant since I was a kid, I grew up eating it multiple times a week. Of course, there’s always going to be that “my mom makes it best” bias, but in my case – 9/10, my mom at King Noodle House Pho Hoang does make it best.

I usually can’t go a week without having a bowl of pho.

When we’re on vacation, one of our dining spots has to be a pho place. It’s typically disappointing – because it’s not going to be as good as mom’s, but I still like to try it no matter where I am.

In Edmonton, there are many, many pho / Vietnamese restaurants.

I’ve tried pho at a lot of them and for the most part, they all seem to have that same – came from the same recipe – type of taste and smell. Most of the pho is pretty “meh.” I usually go to other Vietnamese restaurants to have their non-pho dishes, because the pho (for the most part) just doesn’t compare to mom’s.

There are exceptions of course – places where the broth comes pretty close, like Pho Hoan Pasteur on Kingsway, and more recently opened – Pho Boy Vietnamese Kitchen on Whyte Ave. 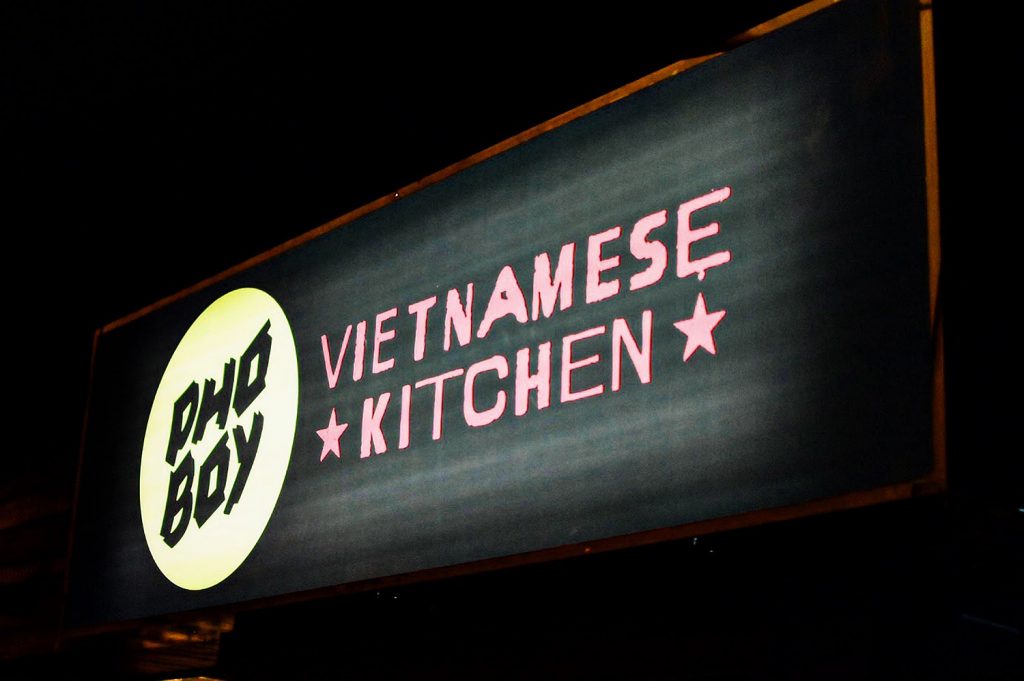 I was delightfully surprised by Pho Boy’s pho. I went with my family to try this new pho restaurant and we were all (for the most part) really pleased.

The chef / owners (Anton and Christina) are actually regular visitors to our pho restaurant, so we were really looking forward to trying out their soup and supporting them! 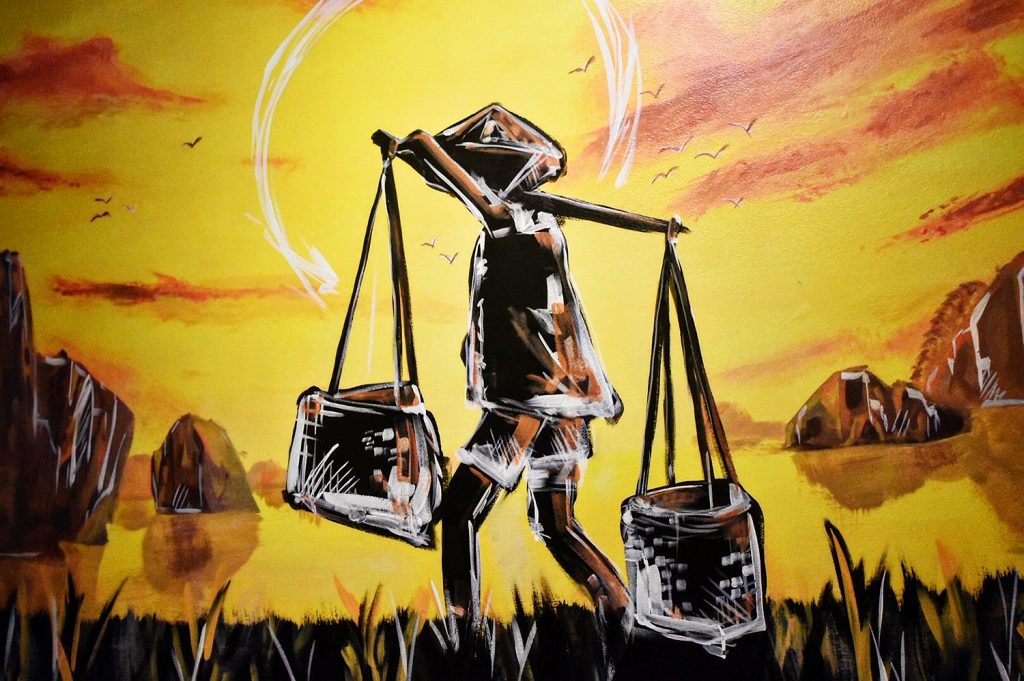 As soon as you walk into Pho Boy, you smell the difference.

It wasn’t the cookie cutter kind of pho I’m so used to smelling at so many other restaurants and it wasn’t when I tasted it too.

These are aromatic bowls – they look, taste and smell great. 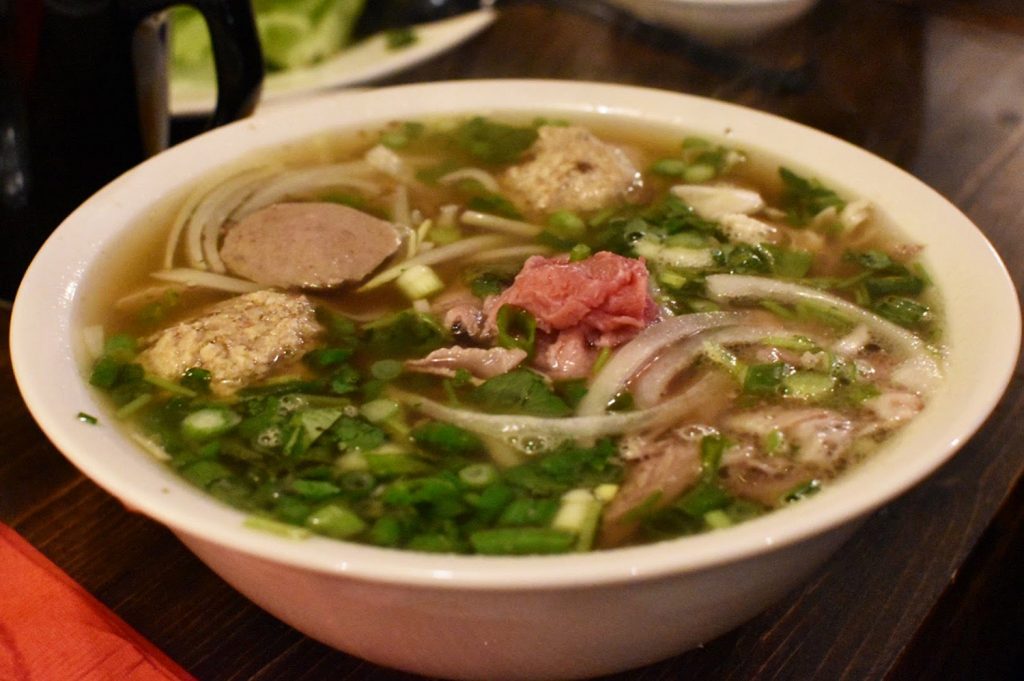 We also tried their “Build Your Own Pho” option – which lets you select your preferences of broth, noodles, proteins, and garnishes.

Build Your Own Pho – satay broth with streak, flank and beef balls – $10

Frequent Vietnamese restaurant goers will know that you can always build your own pho at pho restaurants (just ask what meats you want and they’ll put it together for you) but I believe Pho Boy is the first restaurant I’ve seen explicitly promote it as a menu choice, which looks interesting and is likely an attractive option for people who may be unfamiliar with pho. 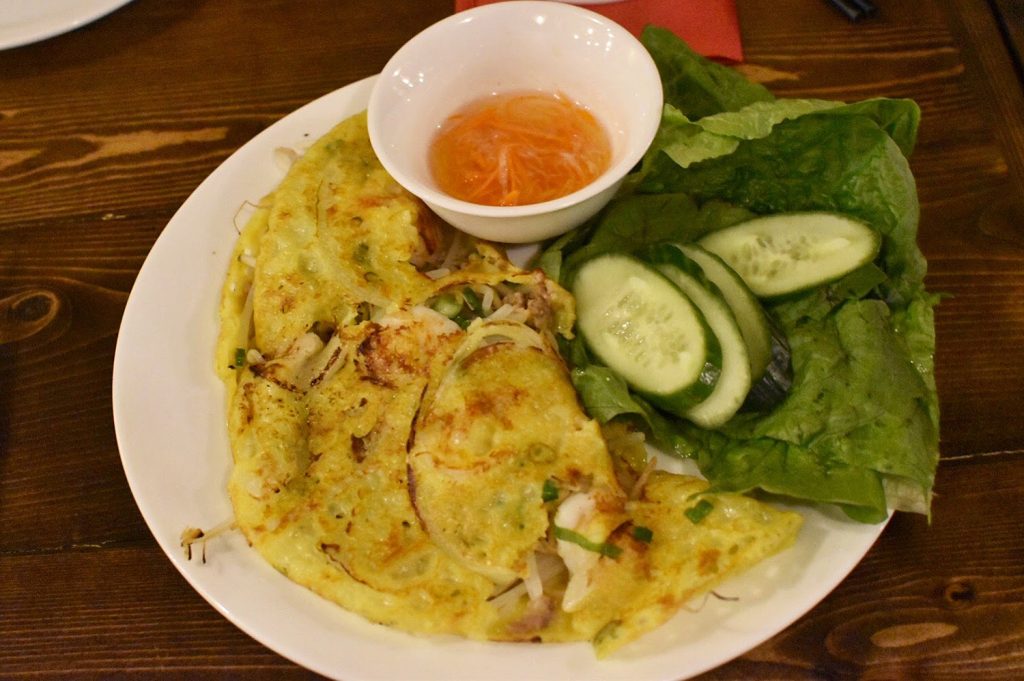 They’ve got some unique Vietnamese appetizers here, some you may only find at a couple other places in Edmonton like the Banh Xeo – a sizzling Vietnamese crepe with shrimp and pork ($7), as well as Banh Khot (sizzling rice poppers with coconut, shrimp and pork – $7) – sort of like smaller bite sized versions of the Banh Xeo. But they’ve also got your standard fare – Green Onion Cakes, Spring Rolls and Salad Rolls. 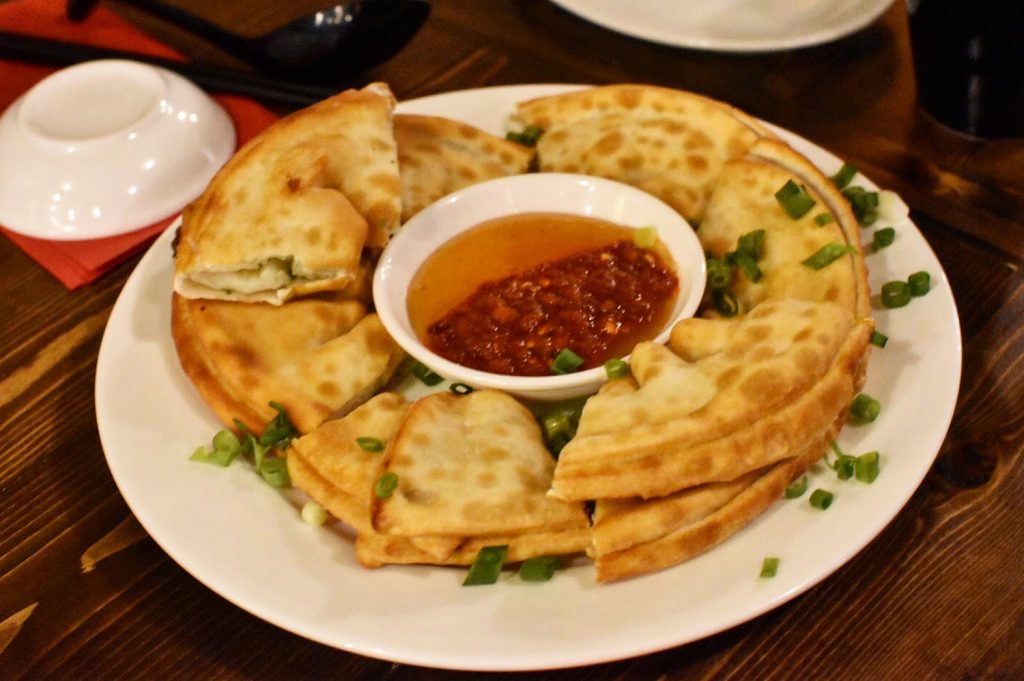 Pho Boy serves “Dragon Balls” with their soup as well.

These are meatballs similar to what you’d find in Vietnamese bun rieu dishes – a mixture of crab and pork. 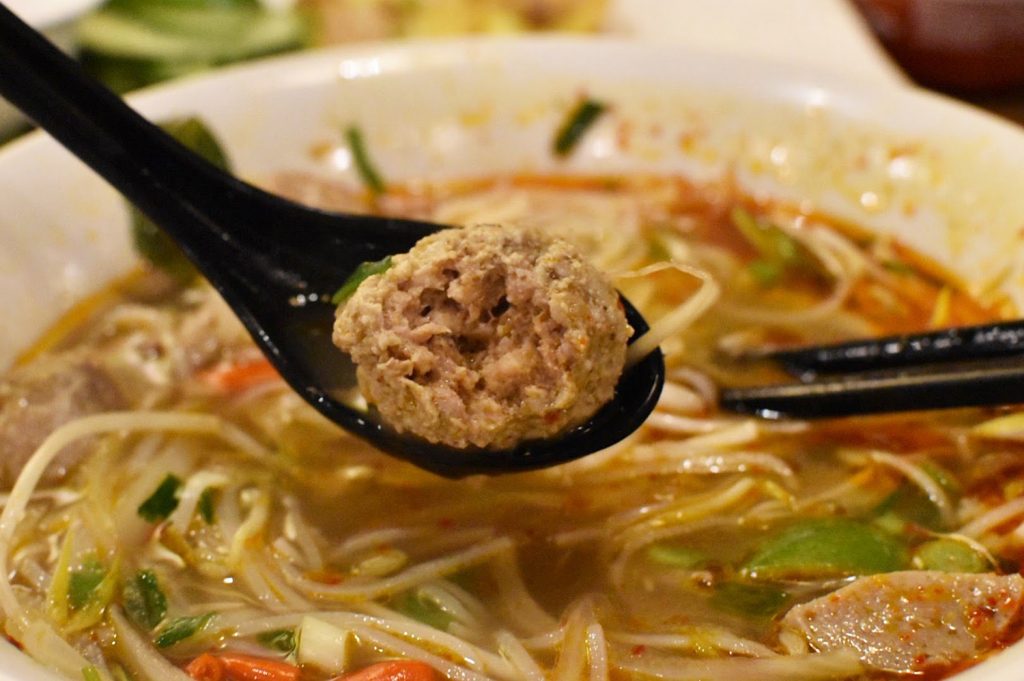 The “Dragon Ball” is a pork, crab, dried shrimp mixture reminiscent of what you’d find in Bun Rieu bowls.

Mike thought the broth had a sweeter taste than he preferred but I thought it was really nice – with just the right flavours you’d want/expect in a good pho broth (beef, ginger, onions, star anise).

I really love the look and feel of Pho Boy too.

There’s a feature mural depicting Vietnam on one side, and cool vintage looking poster paintings on the other. The lamps look like upside down rice patty hats and there are twinkly lights. The tables and chairs are a really slick rustic, wooden look. 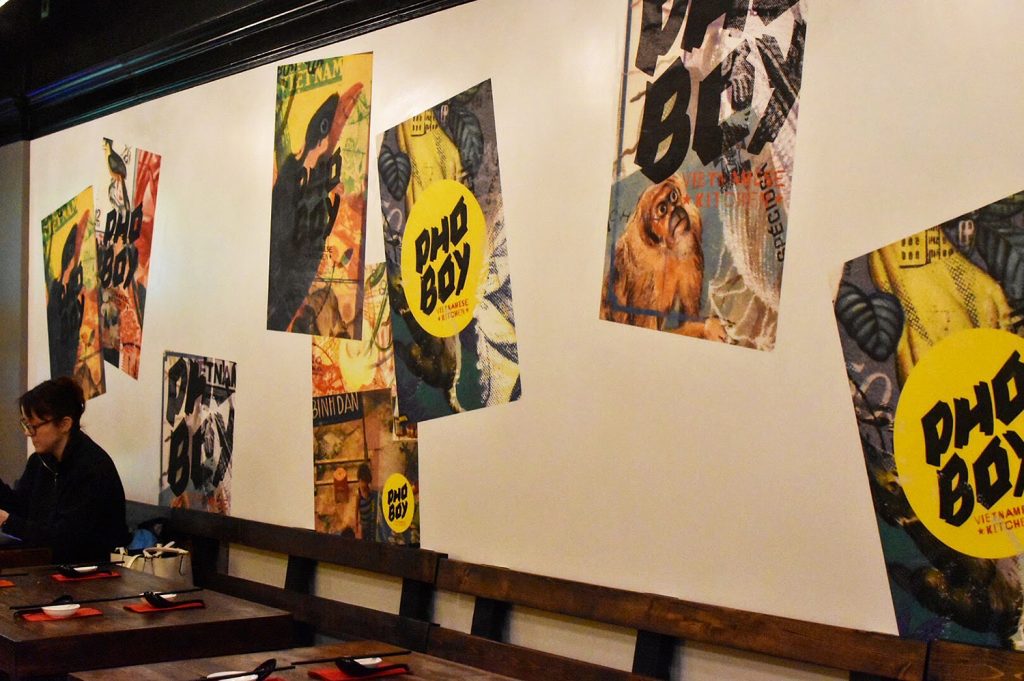 The owner explained he was going for an old + new vibe, sort of like eating on the streets of Vietnam, but with a trendy, modern twist. They put a lot of effort into their look and feel and it shows.

You won’t find a Vietnamese restaurant in Edmonton with quite the same feeling as Pho Boy’s. 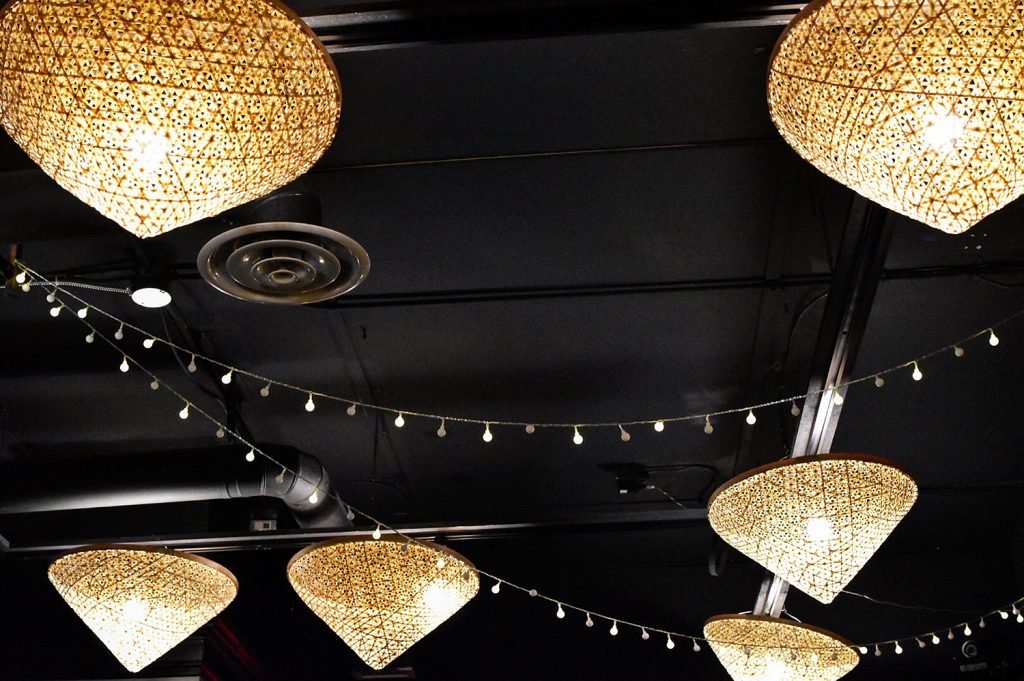 There’s an arcade console in the corner that lets you play 600 different classic arcade games for free – and broadcasts your game to other customers on a TV screen.

It was a hit with my niece and nephew – as well as my husband and brother! They’ve also got a spot under the TV where people can charge their phones if they like. That was the only thing that seemed a bit out of place to me, but I appreciate the sentiment (as someone who is constantly in need of a charge). 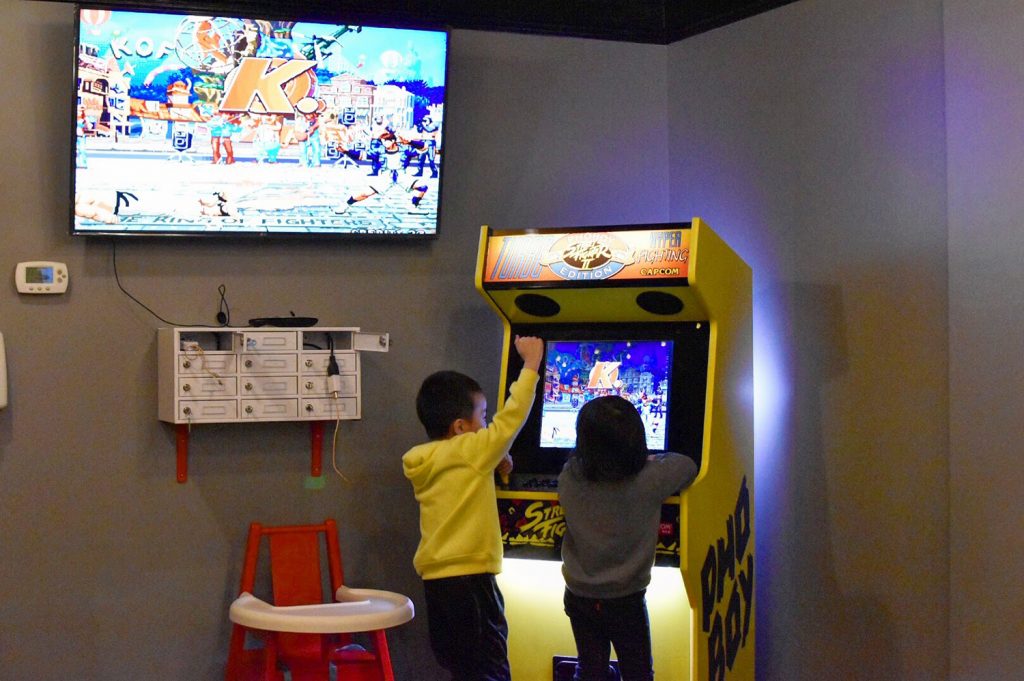 The arcade is a hit at Pho Boy!

Pho Boy’s prices are also quite reasonable for a more modern, authentic Vietnamese restaurant. The bowls range from $10-$14 depending on the size you select (Regular, Large, or Jumbo). Most of the appetizers average around the $7 price. They’ve got really tasty Mogu Juice with Jelly for $2.50 (I got the lychee one) and they also sell shrimp chips which is also reminiscent of my childhood growing up chomping on those chips.

Pho Boy is located on the east side of the Whyte Ave tracks – where it appears a lot of cool, new shops are popping up lately (Dorinku Japanese for example).

I truly wish the family of Pho Boy the best. I enjoyed their pho. I believe it to be one of the better broths I’ve had in the city, and the overall atmosphere of the place is fantastic.

It ain’t like my mama’s pho but it’s superior than most other pho broths I’ve tried.

I know I’ll be back!