Edmonton’s food scene has grown so much in the last few years. Everywhere you look there seems to be a new restaurant popping up! It’s a really exciting time – Edmontonians have so many dining options to choose from for their nights (or lunches) out. And the restaurants that have sprung up – with their talented, passionate chefs – are (for the most part) creating incredible dishes. Personally, there are so many restaurants on my ‘to try’ list, that sometimes it feels a bit overwhelming. Sometimes I’ll try a restaurant and really like it, but then I won’t end up coming back for a long time because I want to get to all the others on my list.

With that kind of saturation, a lot of restaurants that have been around for a long time – that have, proven their worth, built up a following – they can still get overlooked. That’s what I think has happened with Lazia Restaurant located downtown in City Centre Mall at 10200 – 102 Avenue. Who hasn’t walked or driven past Lazia on their way to – something else downtown? 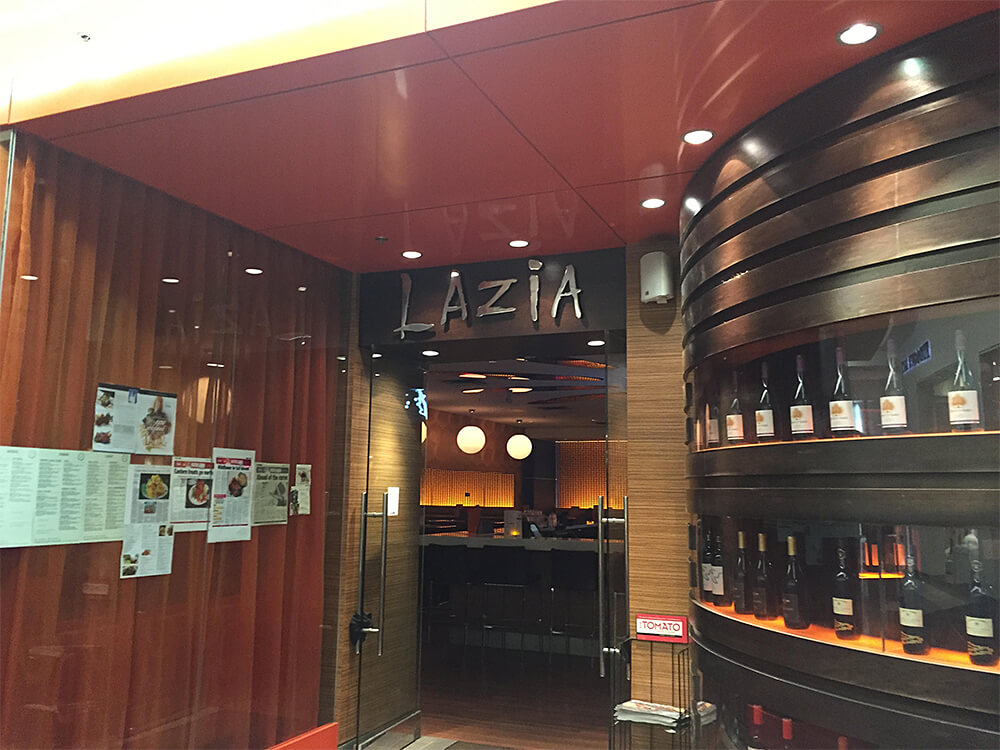 The restaurant has been around for more than 13 years and I’ve been in an out over the last few, for birthdays, bachelorette parties, just regular dinners. I’ve always had a good meal at Lazia but then I’d just move onto the next restaurant ‘to try’ on my list. To be fair as well, when I used to visit Lazia more frequently, I wasn’t really actively food blogging or tweeting – nor would I really be exposed to their posts on social media. (I really do think, and can actually name so many instances where the activity level of restaurants/chefs/biz on social media has directly impacted the dining choices I make!) 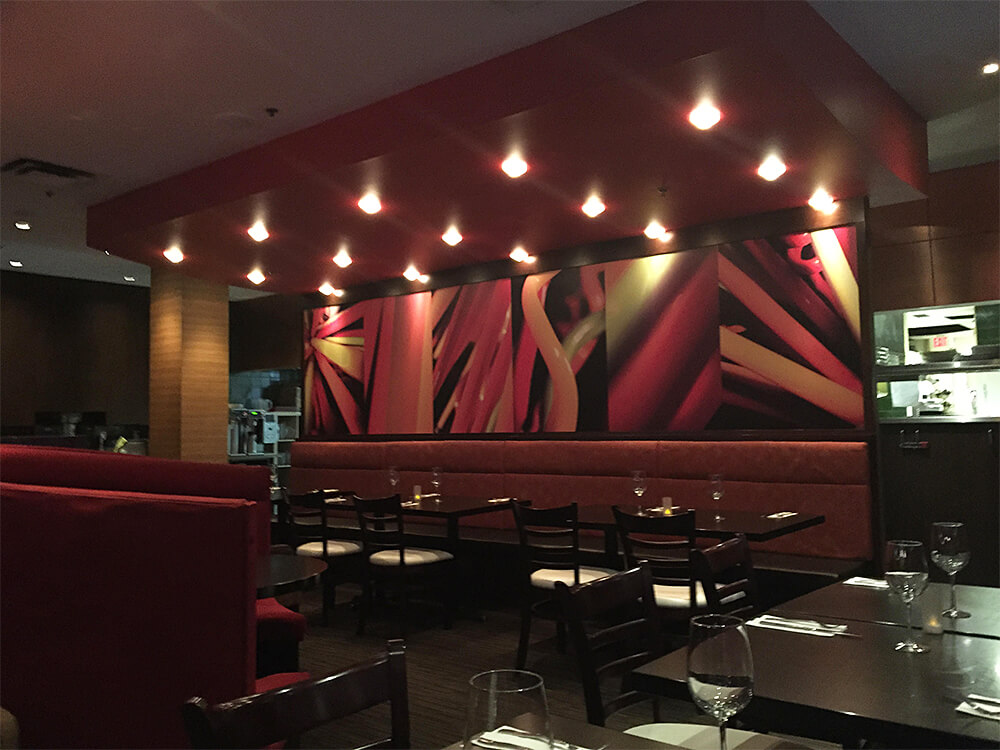 On Tuesday I returned to Lazia with Mike and my mom to try their new fall fusion menu and learn a bit more about what Lazia is all about from owner Richard Lim. Richard says the restaurant has seen busier days. “In some cases, I think people have forgotten about us,” he said. Heavy downtown construction doesn’t help either – and as mentioned, all the other new restaurants in town. By his count, there’s been 40 different restaurants open in the downtown (and up to 124 Street) area in the last couple of years.

They maintain a pretty steady lunch crowd, and have a core group of customers who constantly come back, but Richard says Lazia gets far less traffic coming in for dinner. With their new fall menu though (which features new items but also fan favourites at, what I think are really good prices for the portions), Richard is hoping to remind Edmontonians that Lazia is still here, and it’s better than ever. 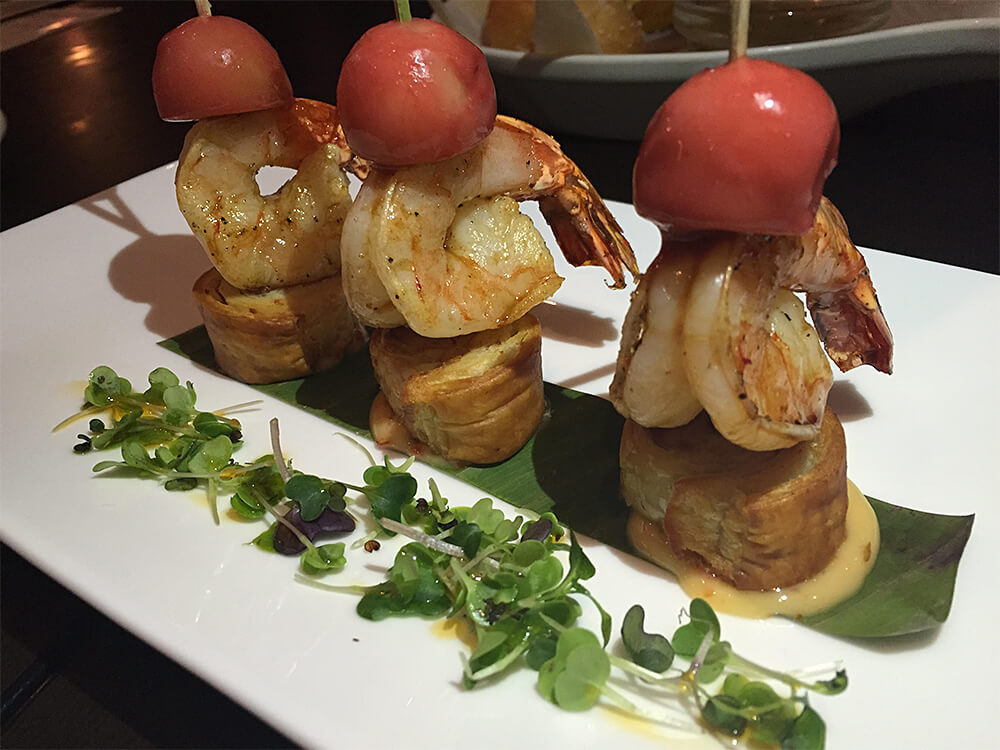 To start off our meal, we tried the Beijing Style Chicken and Shrimp Towers – puff pastry roulade, kecap manis prawns, melon, with sambal mayo ($9). The puff pastry is made from scratch in-house (as is their bread, and most of what they make – sourcing from local producers), and was delicious. Like nearly all of the dishes on Lazia’s menu, this is a combination of east meets west ingredients coming together to form a (really tasty) fusion dish. 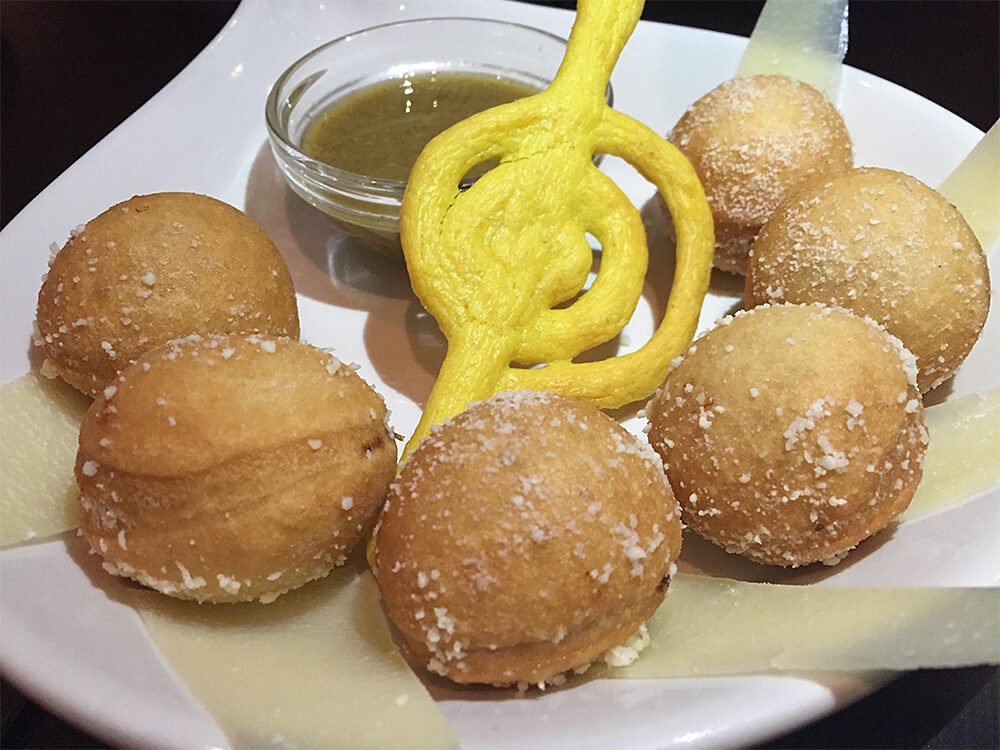 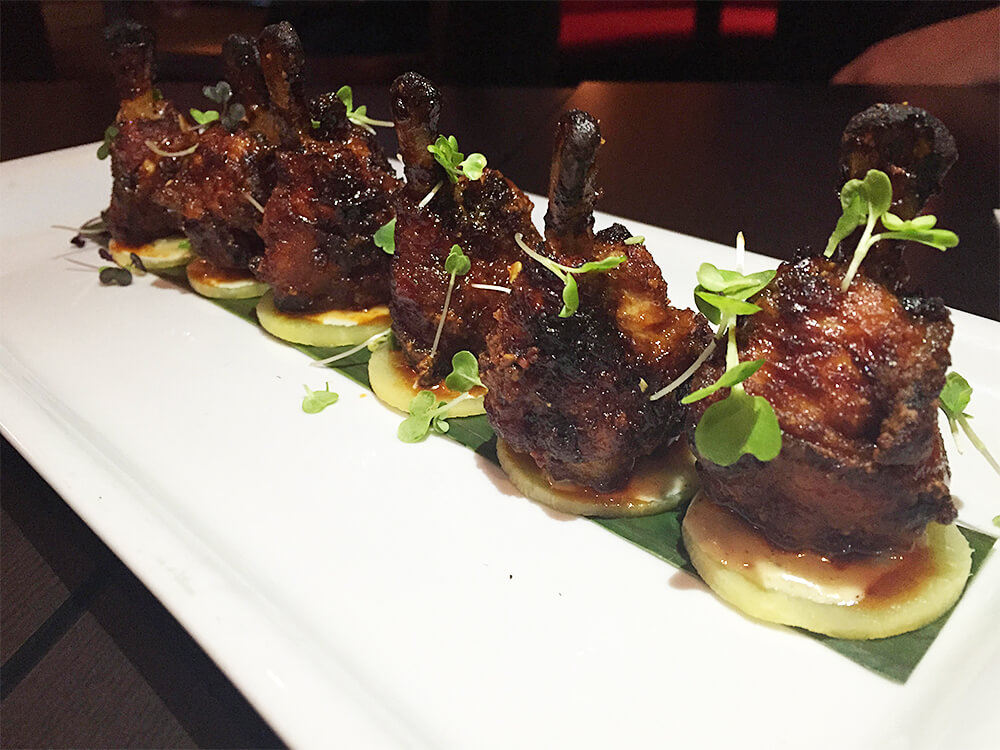 We also tried the Hot Yaki ‘Boxing’ Wings – crispy, teriyaki and chili sauce, ginger, sesame aioli on a candied beet ($9) at Lazia. They’re called ‘Boxing’ wings because customers had remarked that the shape looked like boxing gloves. These were good but not so amazing that I’d order them again. (The parmigiano doughnuts and chicken and shrimp towers we would definitely order again)! 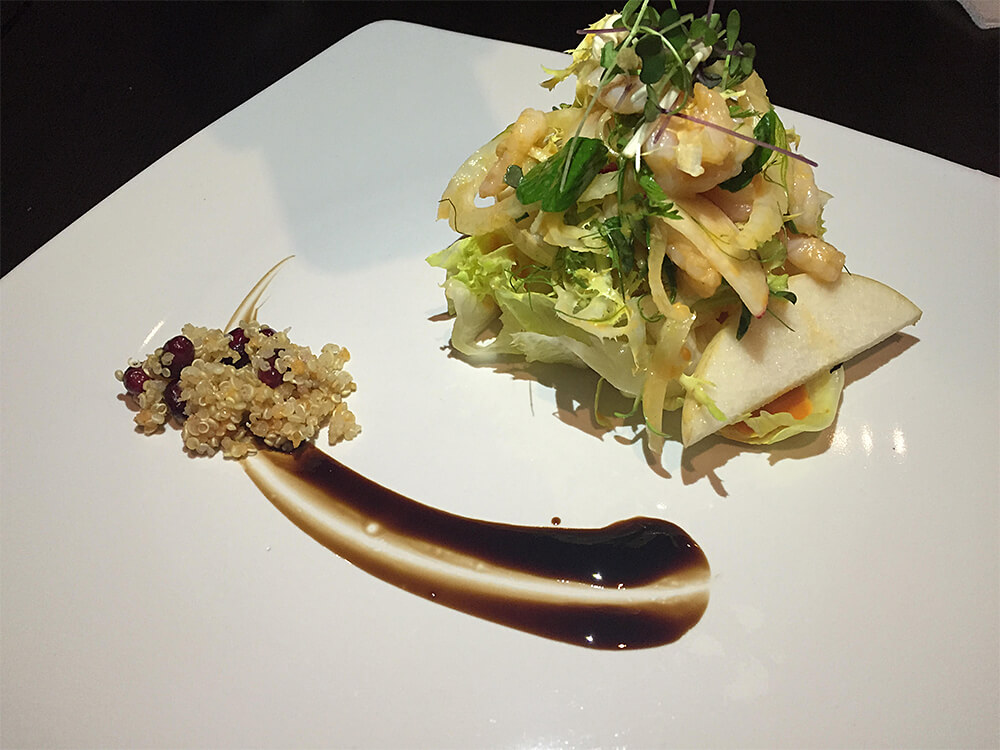 We each had a sample size version of the Korean Shrimp Salad featuring Quebec, matane shrimp, pea shoots, enoki mushrooms, Asian pear, fennel, carrot, sesame and rice wine vinaigrette, with gojuchang chili and organic quinoa ($13). There’s really great crunch in this salad (crunch factor reminded me of North 53’s Crunchy Salad a bit). There’s some nice sweet and spicy flavours in this salad too – Asian pears are sweeter than your typical pear, and gojuchang adds a bit of heat but is also a bit on the sweeter side too. 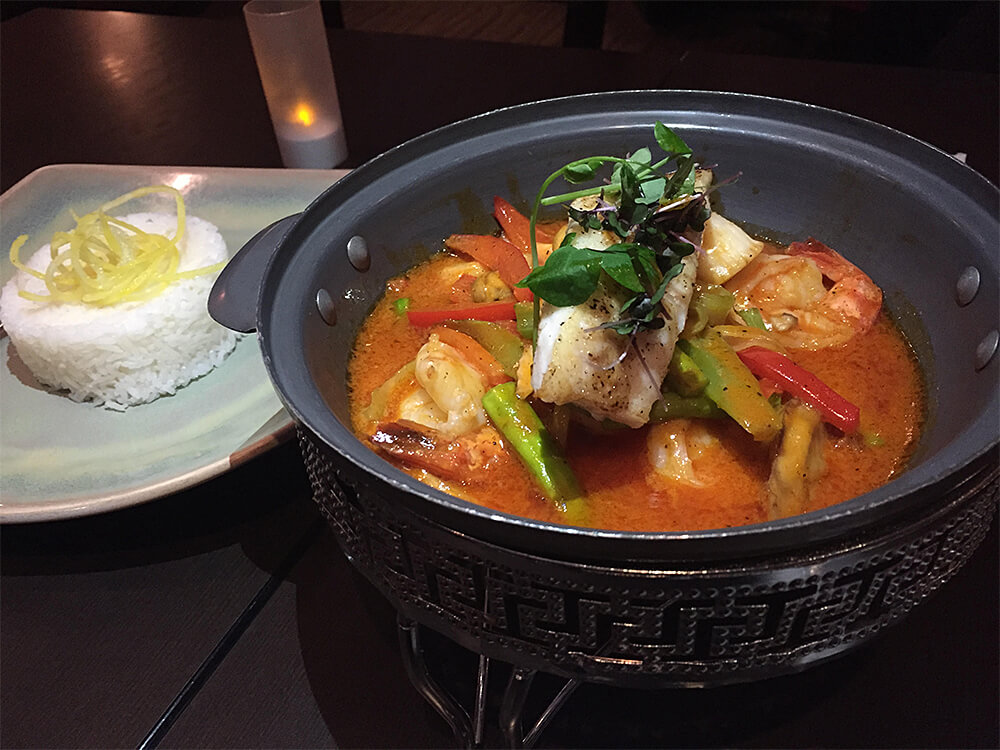 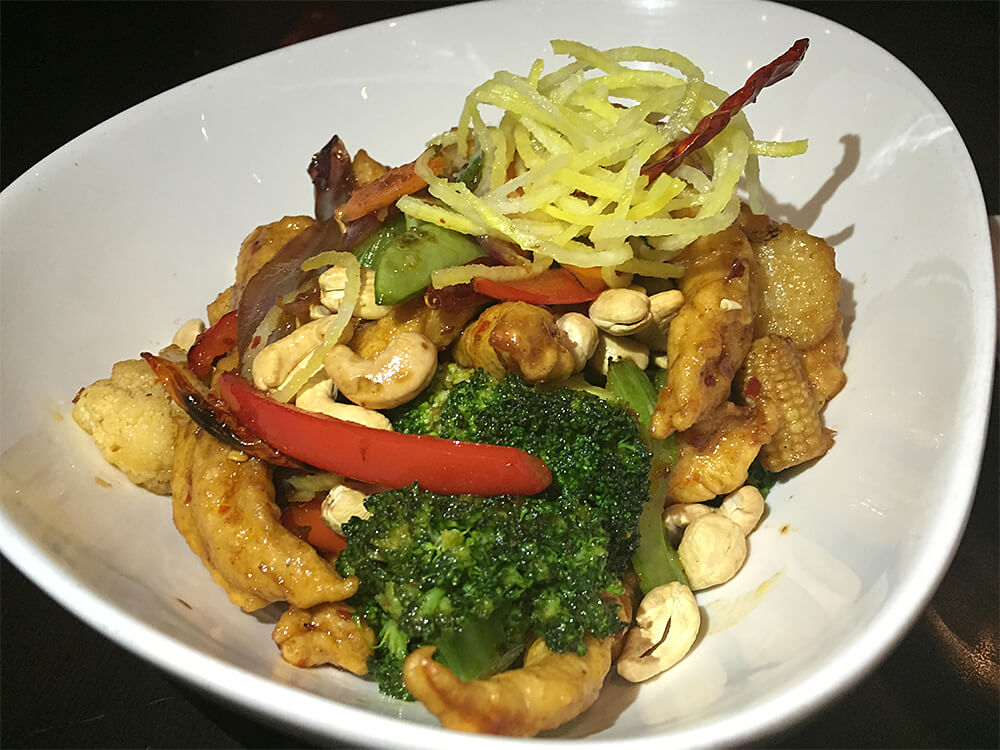 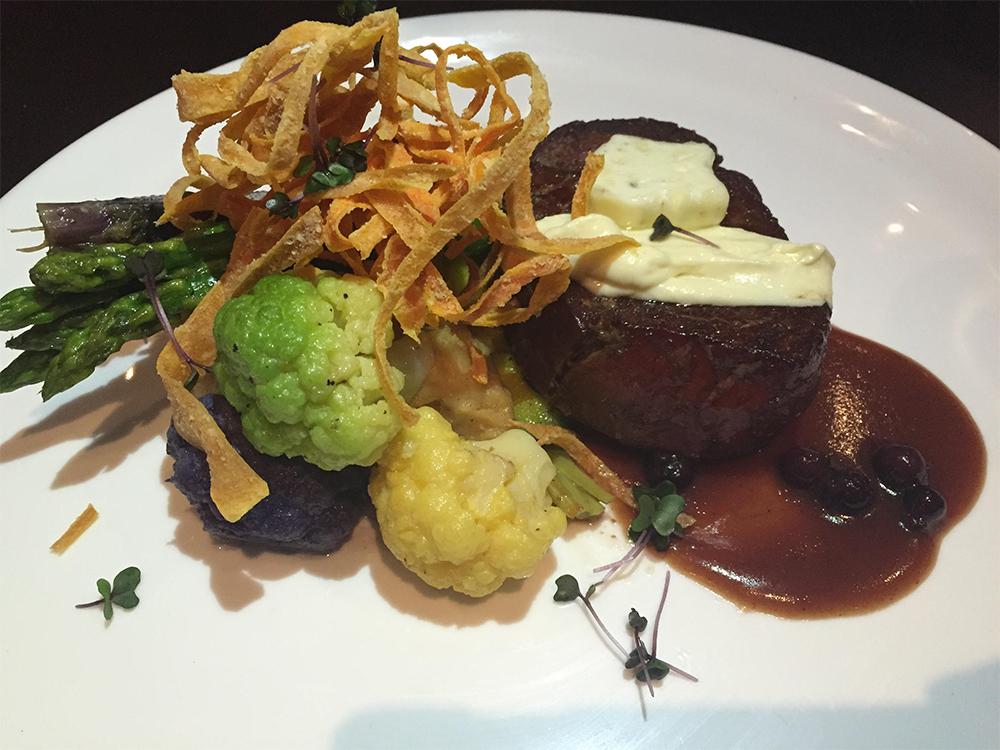 The seafood hot pot was my mom’s favourite dish of the night. I need to say that my mom is extremely picky, and constantly critiquing food at restaurants. She’s the mastermind behind the pho at King Noodle House and always has something (usually something unimpressed) to say about what she’s eating. That’s why I take it as a big compliment that she said she loved the sauce in the seafood hot pot and thought the chef did a really good job with the dish. At one point she was just sitting, taking small sips of the sauce and thinking outloud how they got the flavour really right. The ‘fusion’ aspect to the pretty Malaysian seafood hot pot was the injection of butter into the sauce – something you wouldn’t normally see in a Malaysian sauce.

I really liked the combination of the gorgonzola butter and white chocolate rub on the filet mignon. Mike thought it was a bit weird. This was expected because I am obsessed with blue cheese and Mike is not. I thought it was such an interesting mix of blue cheese bite, with obviously sweeter chocolate. I’m not normally a fan of sweets but this balanced out really well. I also loved their veggies – I thought they were cooked and seasoned perfectly. Not quite ‘done’ veggies can be such a let-down at a restaurant. Thankfully this was not the case at Lazia.

The Cashew Chicken is one of their most popular dishes. While I found it good, I didn’t think any part of it really blew me away. It’s really just what you’d expect in a Cashew Chicken.

What I will say for all of the dishes we had though was how incredible it all smelled. There was such an aroma for everything that came to the table, we all stopped before digging in to take in the smells of each dish. It smelled so damn good. 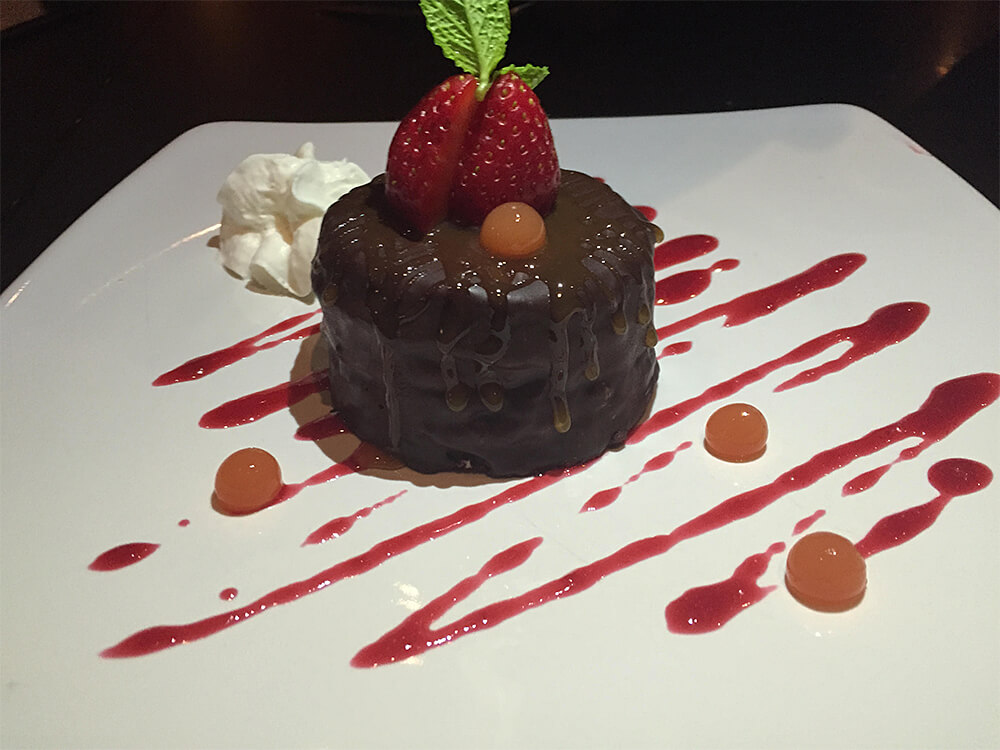 We wrapped up the evening with a Chocolate Salted Caramel Red Velvet Cake ($7). The salted caramel shows up in a few different places on this dish and Mike could not get enough. I’m not big on sweets but I did think the cake was good – not overly sweet, and I also really liked the blood orange gastronomy-style bubbles that burst in your mouth (though I think that came out special for us that evening). Compared to Lazia’s quite expansive regular menu, the dessert selection is on the smaller side. They do all of their desserts in house though, which is great, and they are all $6-$7 – totally reasonable.

All of the dishes we had looked great, smelled great, and tasted great. But what I kept pointing out to Mike was that the prices for these dishes – along with the portion size (and flavours) that you get – are fantastic value. The small plates and appetizers are all in the $6-$9 range. Sandwiches are in the $14-$15 range. Your Asian fusion main dishes are mostly $16-$19. The most expensive entree – at $33 – was the filet mignon, but you could easily have a good, filling main dish here for under $20. I was really, really impressed with these prices. You’d find more expensive dishes at your chain Earls, Moxies, Cactus Club-type spots.

If we’re not going with new restaurants and construction as reasons why business might be slowing down, I think some negative feedback around Lazia typically centers around inconsistency in quality of the food and service. Since we were invited to try the new menu, our service was fantastic and I’d say more attention would’ve been taken to ensure our dishes were solid too, so I hope that the service and food would still be good had we not been invited for the evening. The two people who checked in on us along with Richard all seemed very knowledgeable about the menu and passionate about the food and I think when a place has been around for more than a decade, you know there’s something good there. 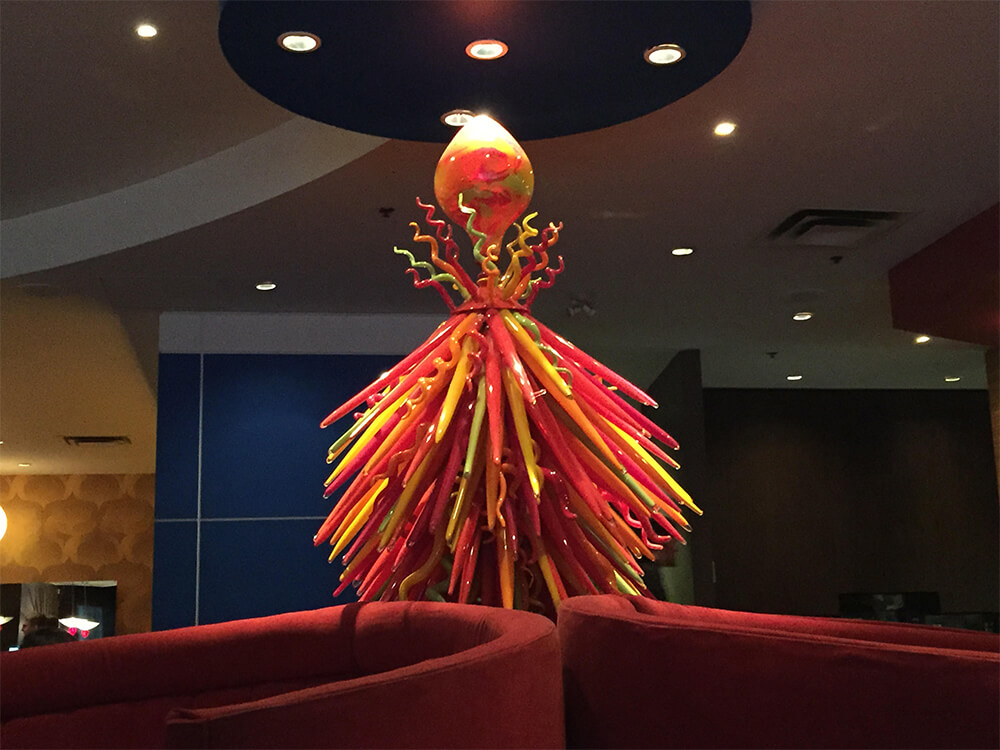 Iconic Lazia art. I still remember this piece from when I last visited years ago.

There are plenty of gluten free options at Lazia as well, and they can make a lot of dishes vegetarian. They’re also well suited for big groups/parties. There is also so much food to choose from (which can be a good and bad thing depending on the restaurant, and how you look at it/how it’s executed) but Mike and I are excited to come back to try even more dishes because they all sound so good and like I said – the prices are so reasonable! Catch a dinner at Lazia then head up to see a movie at City Centre Theatre. Perfect.

It was really interesting to learn about Richard’s history with both Lazia and just in the restaurant business in Edmonton. Lazia is part of a group of local Edmonton restaurants including Wildflower Grill and EAST (both of which Mike and I have eaten at before and really enjoyed too. In fact, EAST was going to be the “E” restaurant I reviewed in my A-Z Restaurant Review Series but it’s taken me so long to get to ‘C’ that I’ll have to do a return trip to EAST to get a more fresh review in mind before I write it now!) Before opening those three restaurants, Richard used to own the South Common East Side Marios (years and years and years ago!) He’s not sole owner of the restaurants though – he’s got a group of partners but he is primarily the one behind the menu concepts. There was also a second Lazia location in north Edmonton for years but after the 08-09 recession they weren’t able to recover, and it closed about a year and a half ago after the partners sold their shares. That hurt the Lazia reputation a bit too but, like I wrote at the start of the blog – Richard is hoping their new menu (and once downtown arena construction is done) will help people start to ‘remember’ Lazia again. 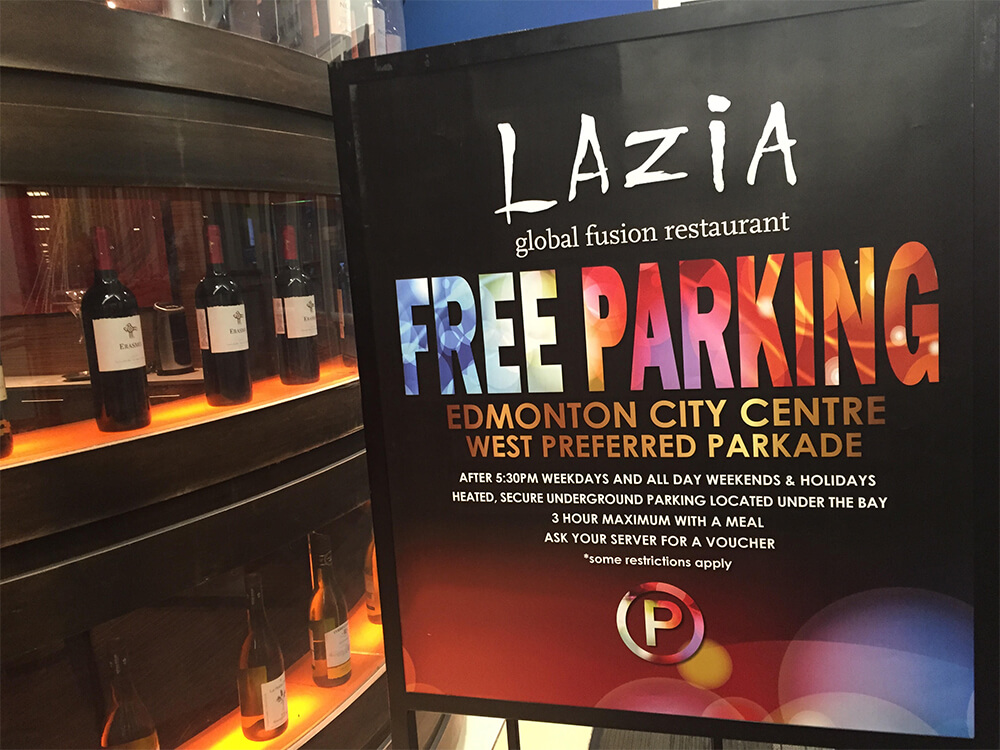 Not a lot of people know there’s free underground parking for Lazia customers!

We really enjoyed our night and we certainly plan on coming back (though – again, with the amount of restaurants still on my to-do list, how soon we’ll be back is up in the air). I love putting faces to businesses and you can tell speaking with Richard for even just a few minutes, that he is so incredibly passionate about the food and flavours he (and his team) are putting on the plate.

The Lychee Breeze at @LaziaWFEast! Love the fog. and obviously the lychee. ? #yegfood pic.twitter.com/jV5kY2C3Oy

If you haven’t been to Lazia in awhile (years? Like me?) I encourage you to return and give the new menu a try. If you’ve never been, definitely give it a try! Let me know what you think!

Linda Hoang is a Canadian blogger based in Edmonton, Alberta, who writes about travel, food lifestyle and pet topics. She's also a seasoned social media/digital strategist with a journalism background. Linda loves exploring the world with her husband Mike, eating their way through cities, supporting local businesses, and photographing Instagrammable Walls. She is the founder of the Edmonton International Cat Festival and a fur-mom to two cats and two dogs.
PrevPreviousSocial Media Notes (#82) – Links for the Week of August 24 – 30
Next21st Annual Mushroom Harvest at Sorrentino’sNext