This week for lunch, I went to try Abyssinia Ethiopian Restaurant (10810 95 Street) with my work friends Alyssa, Gina, and Marta. Alyssa had been to Abyssinia before, but it was new for the rest of us and we were very excited! Read on for the review, but first – an explanation of this new blog series I’m officially launching! (and yes I know I also have a Chinatown ongoing that I haven’t really had a lot of posts to. I am trying to organize my food eating a bit more but I’m also crazy swamped with Edmonton International Cat Festival organizing… lol)

Anyway, I’d been wanting to do a blog review series on restaurants representing different cultures for some time now. I had done a review of Afghan Chopan last summer, which at the time I hoped could be the start of that food series but then that really went nowhere.

I recently had a lovely Twitter conversation with @DianeLuzny, who told me she had tried Afghan Chopan Kebab because of my review, and it was part of what she was doing called A-Z dining.

Thks last wk to @lindork for her suggestion of http://t.co/KshbonKrGX for Afghan food. This wk Albanian. Next Algerian. A-Z dinners

For Diane, it basically meant trying a new restaurant that’s “genre” started with the letter A (to Z).

I thought it would make for a great blog review series!

@DianeLuzny I think it would make a great blog series too :-) I may copy you in the future if that’s okay!

So, I’ve adapted Diane’s idea a bit, and am excited to announce my new Edmonton A to Z Restaurant Series, where I’ll be trying restaurants in order of the alphabet, where the next letter in the series could mean trying a restaurant that starts with that letter (like Abyssinia!) or trying a restaurant genre/type of food that starts with the that letter (like Afghanistan!) In this case, Abyssinia = A (and so does Afghan Chopan so really, they both count as my kick-off to the series). 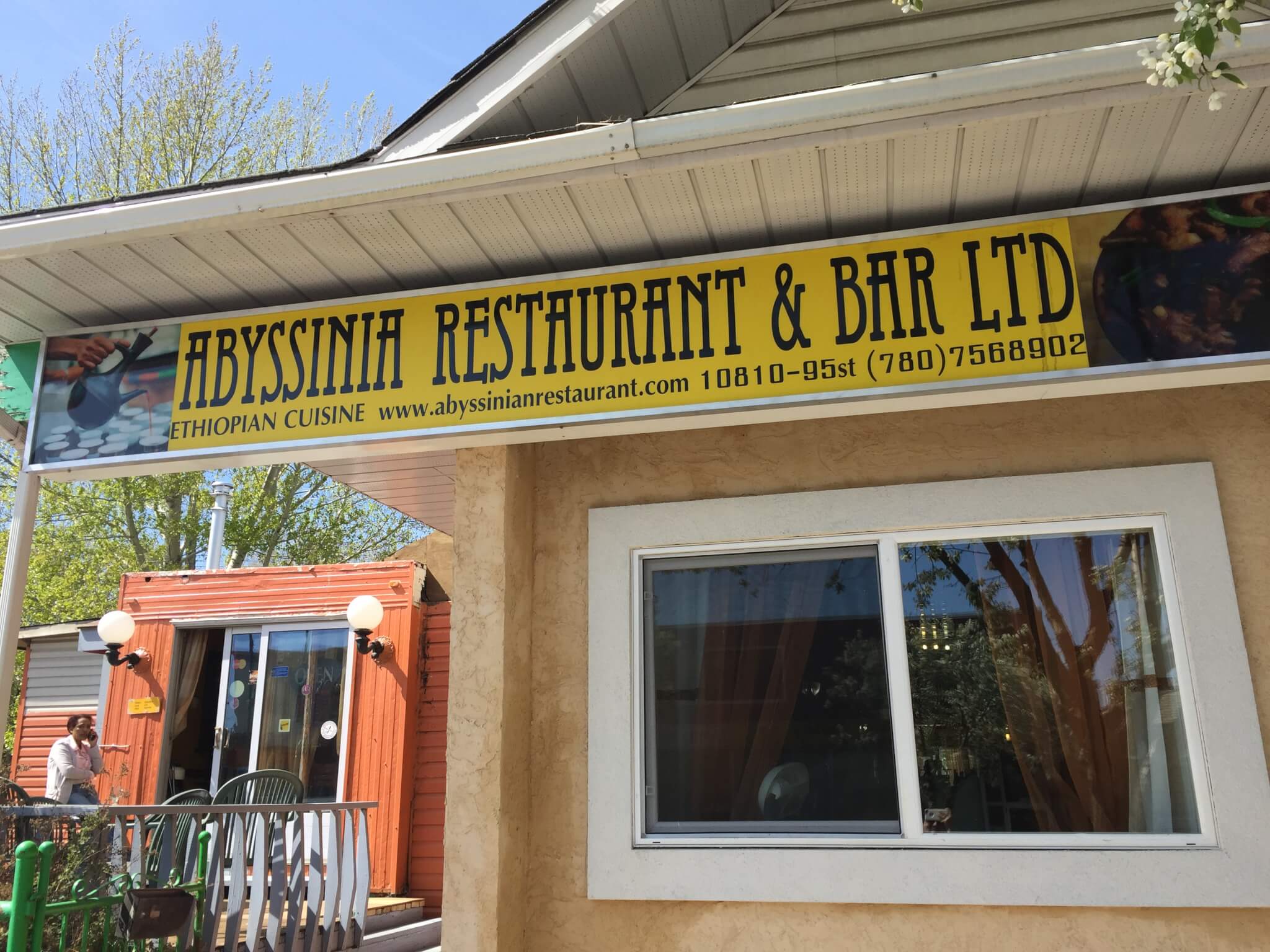 Abyssinia is located in Little Italy on 95th Street and 108 Avenue. There was ample street parking right out front when we headed there for lunch.

The exterior is not the best (someone on Instagram told me they had wanted to try Abyssinia but it looked fairly sketchy, they are not wrong, but I encourage you to look past the exterior!) There is a really lovely patio though, facing the street that warms the place right up. 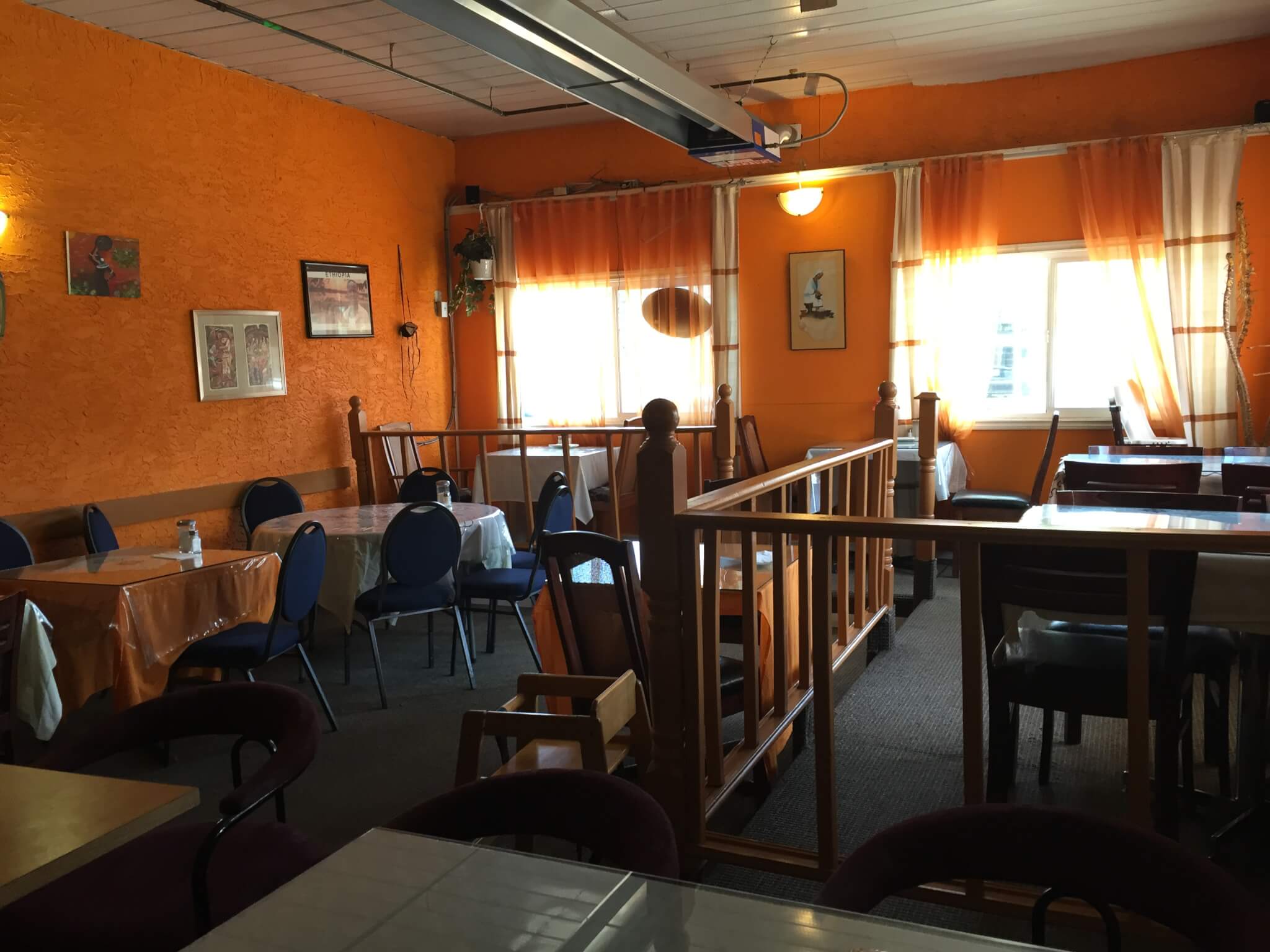 When you walk inside Abyssinia it’s kind of like you’ve walked inside a house (in fact I really think it was a house before, because there’s also a pretty spacious, fenced in yard out front next to the building too). There are two doors you could use to your right, that leads into the main dining area.

If you turn right, you’d be heading up into the bathroom, kitchen, and door to the patio/yard. 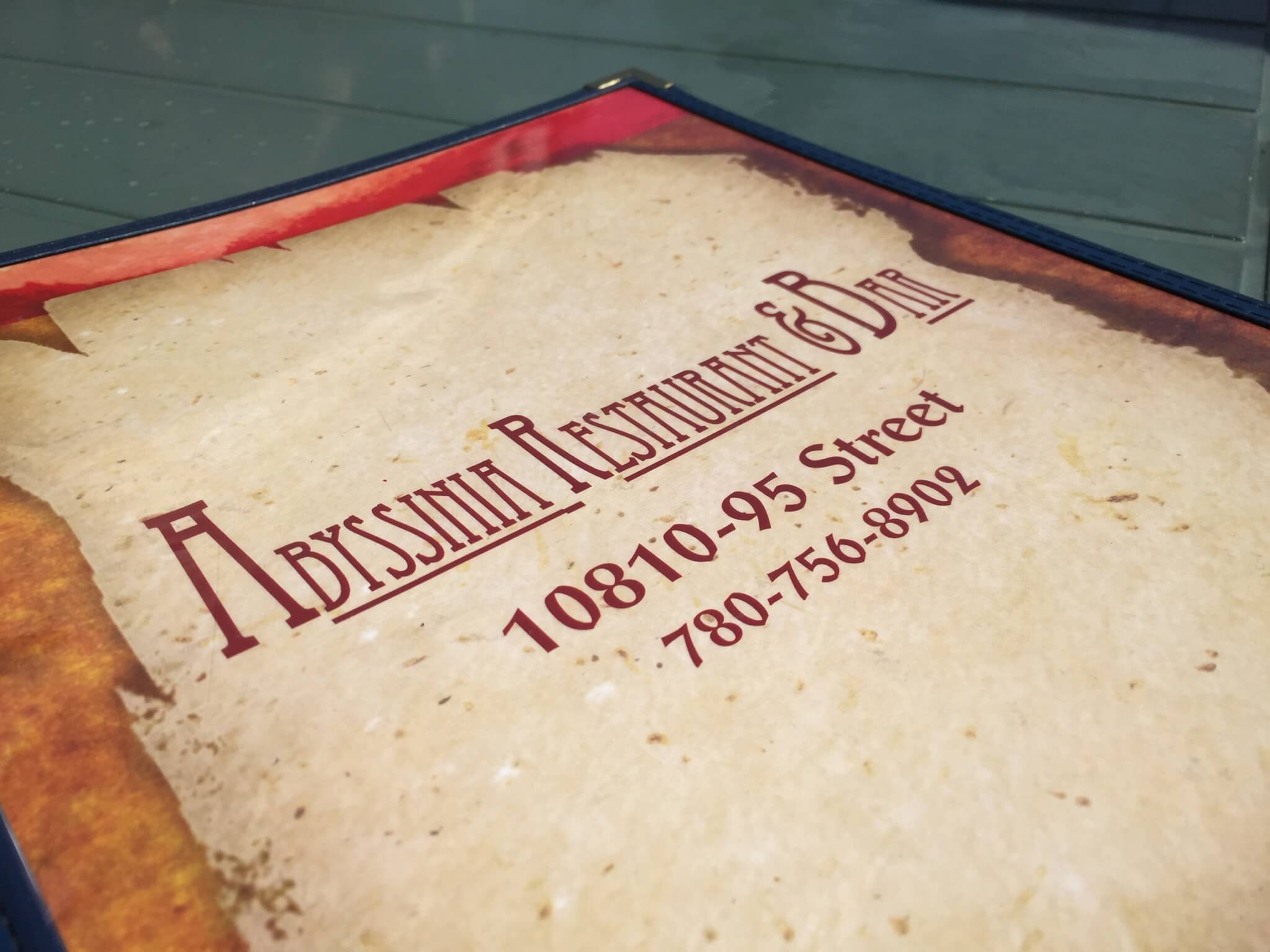 The menu at Abyssinia Ethiopian Restaurant.

Abyssinia’s menu offers a variety of authentic, Ethiopian lamb, beef, chicken, and vegetarian/vegan dishes. They also have an Ethiopian Coffee Ceremony that sounds really interesting but that we did not order.

They host vegan dinner buffets on Wednesdays & Fridays ($15/person) and vegan and/or meat buffet dinner options on Saturdays ($20/person). They also recently launched lunch buffets but it’s been slower to pick up so on the day we went they had a buffet tray station set out, but no food in it. 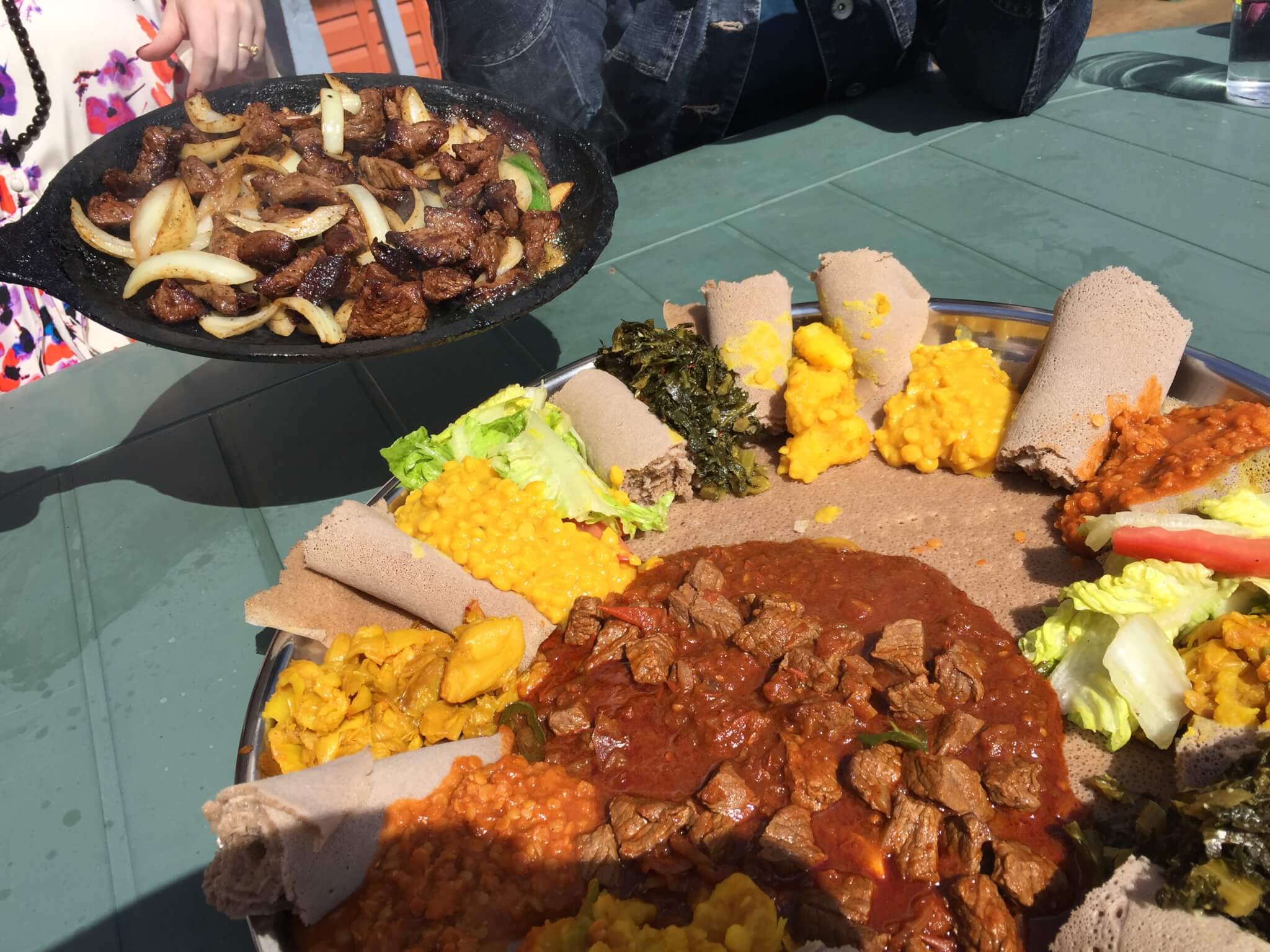 Our group got to sit on the patio (yay! Beautiful day) and we decided to share a few dishes recommended by our really nice server. We ordered the Lamb Yebeg Tibs – tender chopped pieces of lamb sautéed with onion, tomato, and jalapeno, served with awaze (side of Ethiopian hot sauce), served spicy or mild, with a side salad and injera (Ethiopian sourdough flatbread) – $17.

We also ordered the Beef Chacha – cubes of beef sautéed with onion, rosemary, jalapeno, and fresh garlic (served with a side of salad and injera) – $17.

And we ordered the Veggie Platter – which is a combination of Kei Misir Wot (spicy lentil sauce sauced with Ethiopian spices), Gomerr (colald greens, cooked with onions, garlic and jalapenos), Tikel Goemn (cabbage cooked in onion and garlic sauce and flavoured with ginger and house spices), Fosolia (green beans, carrots and potato sautéed with garlic and spices), and Kik Wot (chickpeas cooked with curry and Ethiopian spices) – $15. 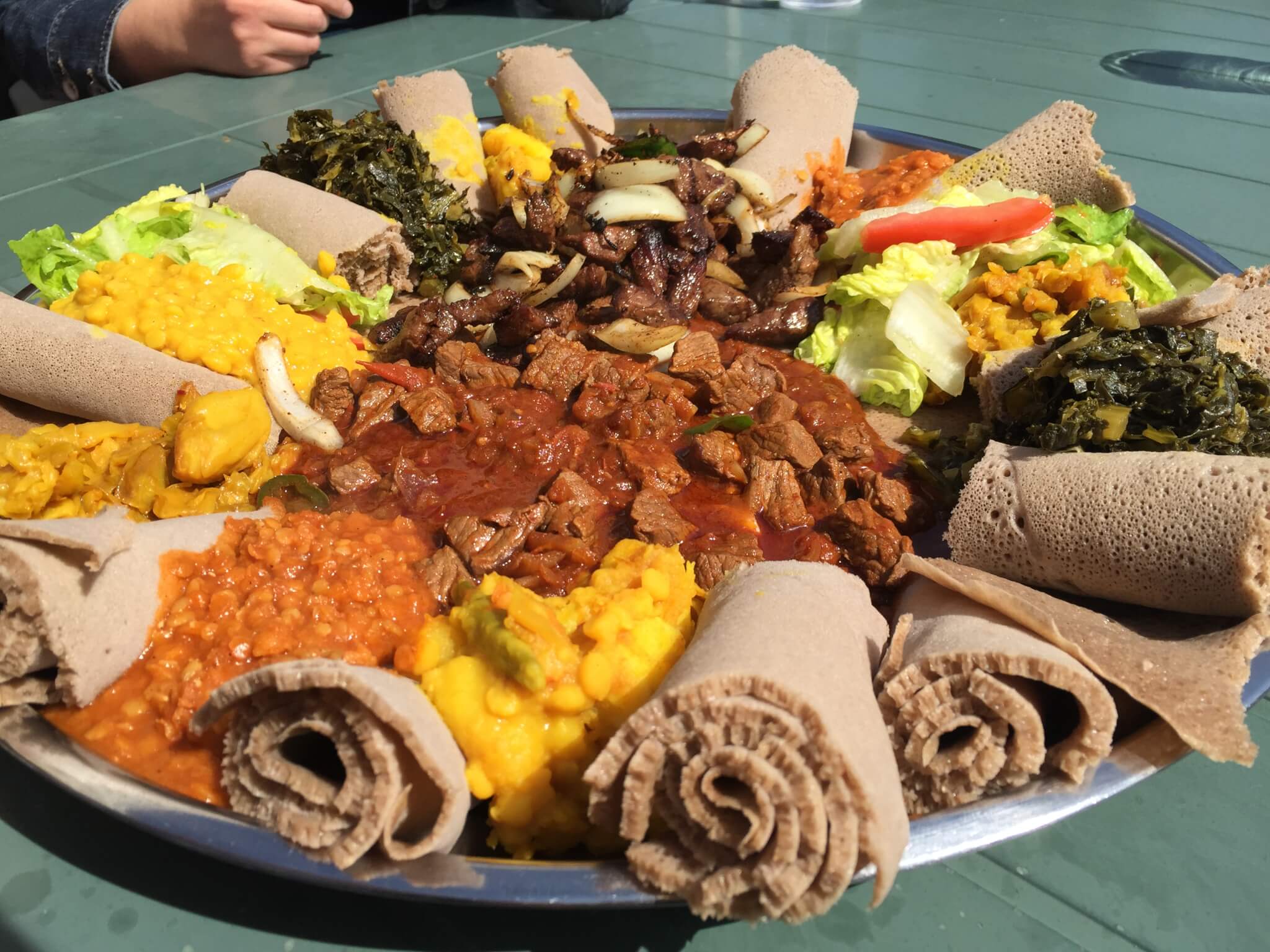 So. Damn. Delicious! Our three orders came out on one big platter, the veggie items and side salads lined the side of the platter, and the lamb and beef entrees were in the middle. You don’t get cutlery (I’m sure if we asked they would’ve given it to us but we are doing it authentically!) You’re encouraged to eat with your hands, wrapping pieces of the injera bread with all the different food.

It smelled great and tasted fantastic. The Gomerr collard greens (which I think that day they actually used kale instead) were delicious. As were the Tikel Gomen cabbage. The lamb and beef was perfectly seasoned and tender. Don’t eat this dish if you’re a germaphobe because there was a lot of double dipping. ;)

The injera sourdough flatbread was very interesting. It has a sponge-like texture (and the holes) and is fairly sour if eaten on its own. About part-way through I stopped eating my injera and opted to just pick at the food separately with my hands because the injera really fills you up but I wanted more of the actual fillings in my tummy. 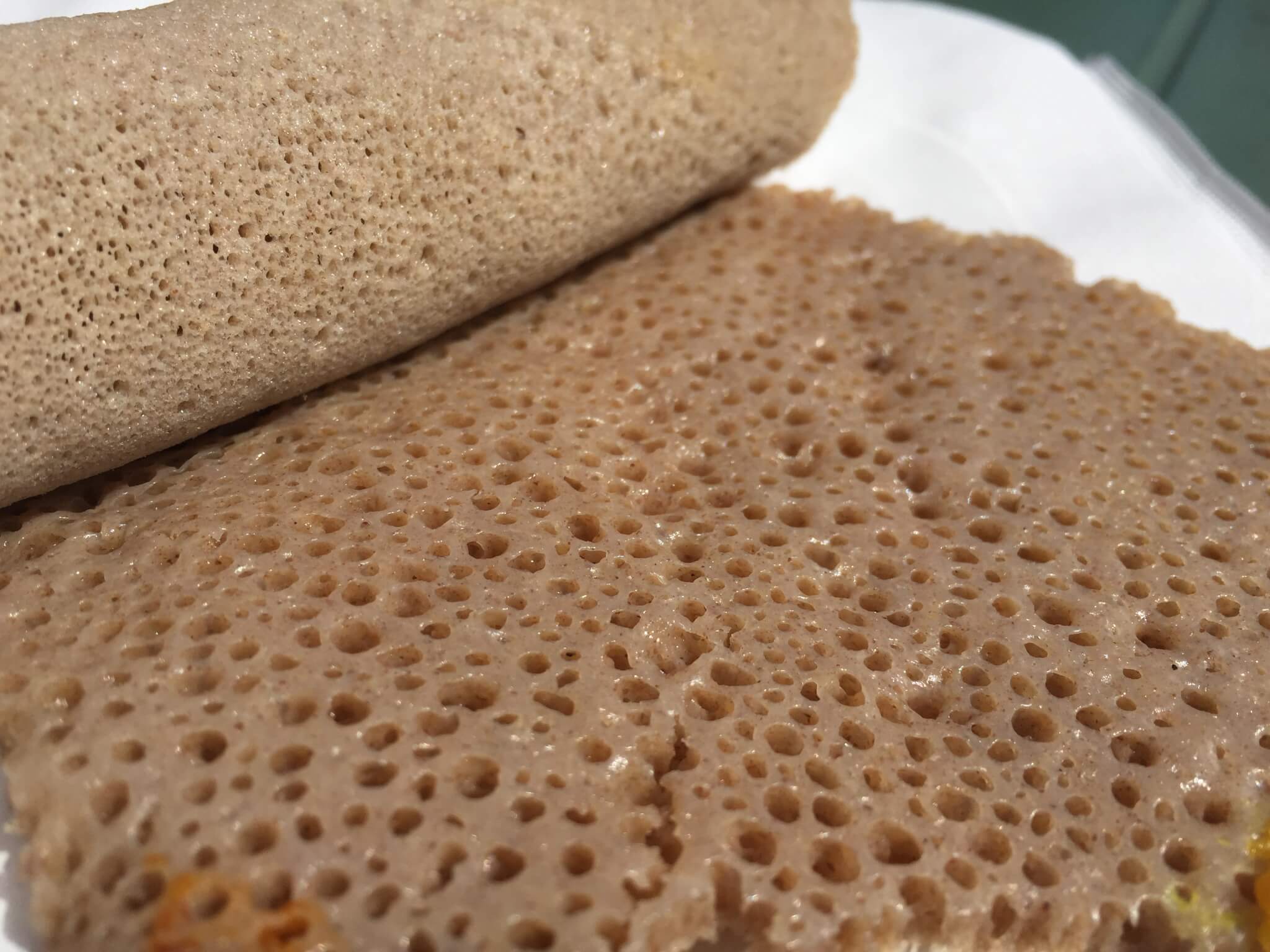 A close-up of the Injera – Ethiopian sourdough flatbread.

Overall, I thought Abyssinia was fantastic. What a lovely restaurant! Our server was so nice and very helpful – recommending items, explaining what everything was. She even offered to give us more injera. She made us feel very welcome and comfortable!

The meal split among the four of us cost us each $20 (including tip) – which is pretty great value.

We had a great dining experience and will all be coming back! I’d be really interested in trying their dinner buffets (and once they get more momentum and maintain consistency – their lunch buffets).

Don’t be scared off by the somewhat faded exterior. Abyssinia is worth (many) trips to. They’ve been around for 6 years (but only 4 with the name Abyssinia) and I wish them many, many more successful years. What a great spot to have an adventurous (yet comfortable meal.

So have you been to Abyssnia? What did you think?!

Linda Hoang is a Canadian blogger based in Edmonton, Alberta, who writes about travel, food lifestyle and pet topics. She's also a seasoned social media/digital strategist with a journalism background. Linda loves exploring the world with her husband Mike, eating their way through cities, supporting local businesses, and photographing Instagrammable Walls. She is the founder of the Edmonton International Cat Festival and a fur-mom to two cats and two dogs.
PrevPreviousSocial Media Notes (#69) – Links for the Week of May 4 – 11
NextEdmonton A to Z Restaurant SeriesNext