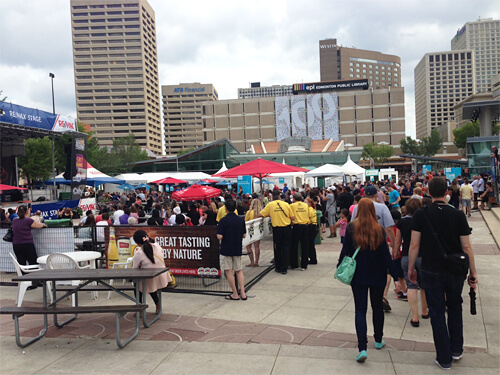 A Taste of Edmonton in Churchill Square!

I went to a Taste of Edmonton with Mike + friends Denise, Tony & Taylor. I also went a second day with my mom! 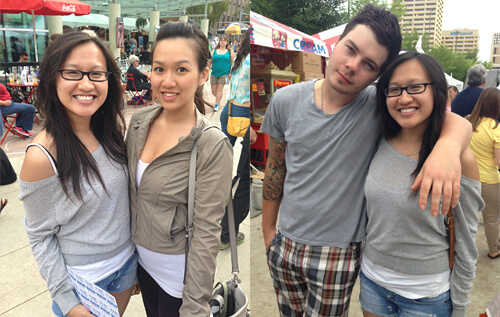 Fun times with the best people at Taste of Edmonton! 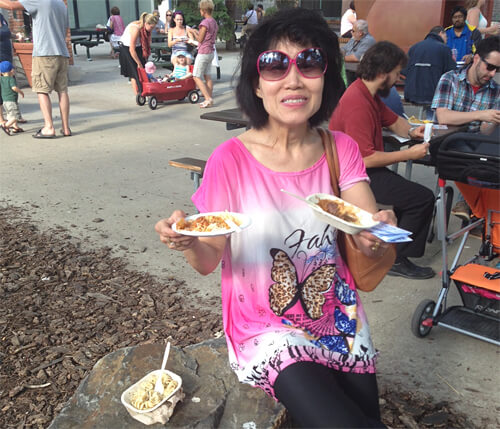 My cute mom gorging at Taste of Edmonton!

Armed with many, many tickets, we sampled several items from different restaurants including The Lingnan, Little Italy Pasta, Khazana, Zinc, Normand’s, and more. 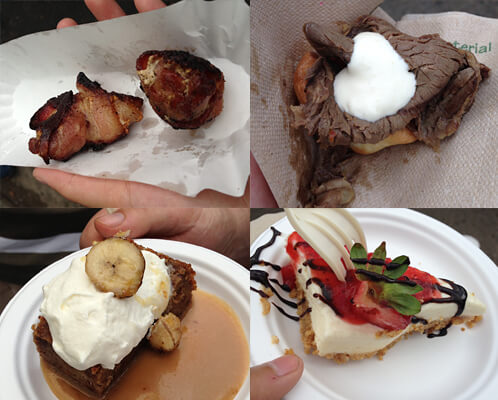 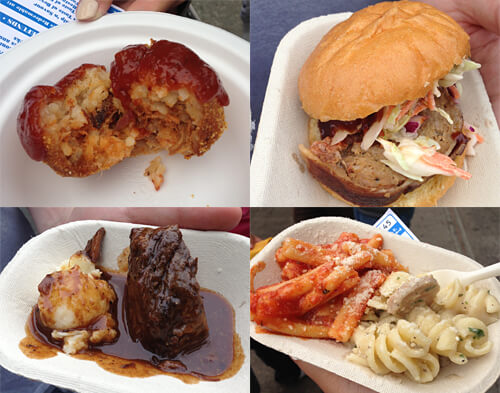 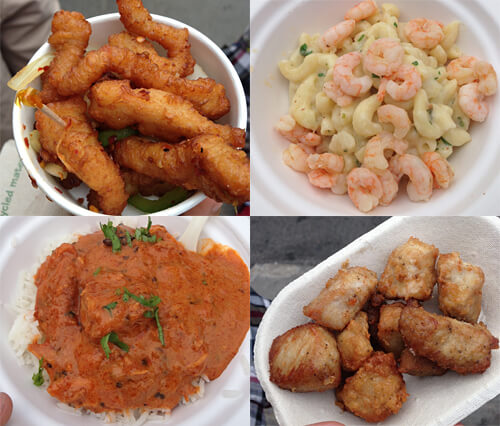 My favourite dishes of the night were Normand’s Bistro’s beef short ribs and mash and Zinc’s banana bread pudding. SO GOOD!!

Mike and I shared 40 tickets ($40) and our tummies were pretty stuffed by the end of the night. We liked the different ‘regular’ and ‘large’ size options that a Taste of Edmonton offered this year as well. I also liked the concept of all the different foodie showdowns and chef workshops that this year’s festival offered – we just didn’t have or make the time to actually attend them. (Maybe next year!) 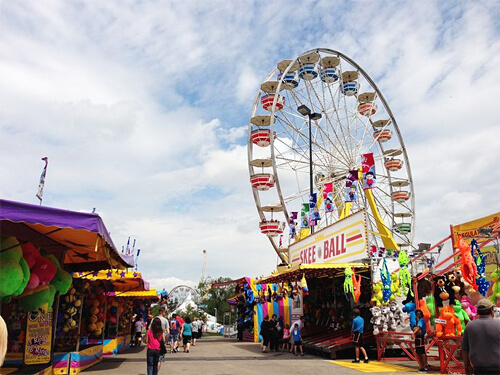 Our group for K-Days was quite large and included Mike’s sister Amanda and her boyfriend George, Denise & Tony again, and Mike’s close friends Rob + Logan & their girlfriends Nicole + Brandy, along with a few other friends from Mike’s high school days. I was actually surprised at how well the whole group managed to stay together throughout the night, given the size. 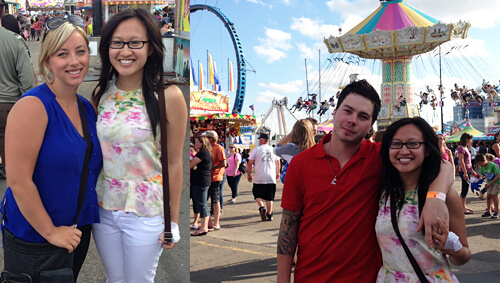 I used to love going on rides at K-Days but I feel that two factors have led me in the direction of not loving rides as much as I once did. 1) Mike is a baby when it comes to rides and the few times I’ve tried to coax him onto one, he’s been so stressed out that it’s stressed ME out! 2) I think when I covered K-Days (then known as Capital Ex) for the Edmonton Sun and got to go on all the rides without waiting in line, something switched in my tummy and it’s easier for me to get sick on too many rides now. You really need that waiting-in-line aspect of rides for them to be fun, lol. But I still like going on a few rides anyway, and Mike and I found a nice compromise. 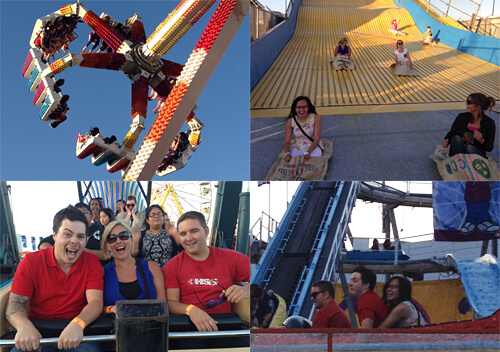 This year I mostly went to K-Days for the food though! Of course. ;) We tried a bunch of different midway fare and really they were all quite tasty!! My favourite was the ribbon fries with cheese and bacon – anything ‘chips’ … I LOVE. 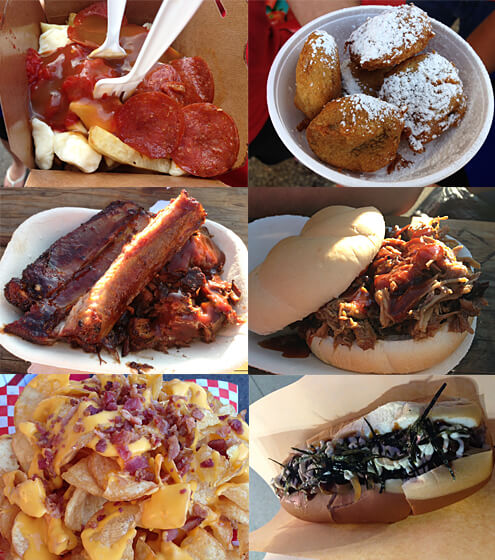 We didn’t stay for fireworks – we’re pretty much old souls, like to get home at a reasonable hour and didn’t want to deal with hoardes of people trying to get out of the parking lot at the same time, so we left about an hour before the fireworks show. Still it was the longest we have stayed at K-Days in the last couple years, which is a good indication of how much fun we were having and how much we had to do. 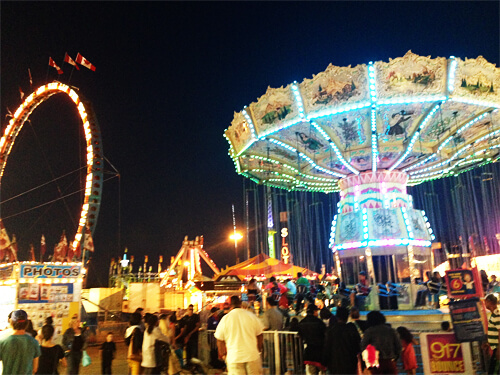 Overall we had a really great time at both aTaste of Edmonton & K-Days. They really are a staple of my summer/my birthday week and this year was probably the best yet! :) I can’t wait until next year!! (I also really wish we had tried to win a Minion. They were everywhere!!!)

So did you go to a Taste of Edmonton & K-Days? What were your favourite dishes? :)

Linda Hoang is a Canadian blogger based in Edmonton, Alberta, who writes about travel, food lifestyle and pet topics. She's also a seasoned social media/digital strategist with a journalism background. Linda loves exploring the world with her husband Mike, eating their way through cities, supporting local businesses, and photographing Instagrammable Walls. She is the founder of the Edmonton International Cat Festival and a fur-mom to two cats and two dogs.
PrevPreviousSocial Media Column: #yegweddinghour a prenuptial planning asset
NextReview: La Ronde Revolving RestaurantNext