[Recap]: My experience on the Capital Ex “beat”

For people who don’t know, a “beat” in the journalism/media world, means a specific topic that you do stories on. Common beats include the crime beat, city hall, legislature, or education. Writing movie reviews, music reviews, or video game reviews are also various beats. You don’t usually get to a particular beat — where you are solely writing/reporting on that particular topic — until you’ve been working with general topics for quite some time (well unless there’s a specific job posting for “city hall reporter” but I think that’s rare because usually its internal job postings for beats). This summer, if I had been an actual “staff reporter” as opposed to regular freelancer, then I would have been a “general assignment” reporter. That means doing various stories that might fall into one of the aforementioned beats, but I wouldn’t be constrained to doing stories solely on a particular subject, I’d be doing a variety of stories that might touch on one or more beats that are still newsworthy events or topics worth covering.

But at the end of July I got a very cool opportunity — my editor wanted me to be on the “Capital Ex beat” ! A very specialized beat, covering Capital Ex basically meant I would be responsible for dishing out stories (two a day) related to Capital Ex — the summer exhibition/carnival that takes place in Edmonton each year. This year it took place from July 23 to August 1 (not including the parade and pre-Capital Ex coverage, and excluding one day I took off in between because of my birthday!)

It was fun, it was hot, it was challenging, it did get a little tedious being there every single day, but overall it was a great experience and I had a great time meeting very interesting people. My most popular story (it made it on the most popular Edmonton Sun stories list and stayed there for about two days!) was my first-person “Capital Ex on $25” piece for the Sun. It was so much fun to do and I credit colleague and at-the-time fill-in-assignment-desk-editor Frank Landry for the idea. Could you have fun at Capital Ex on a budget? It was tough, but it was do-able. But I stress — tough! I met carnies, hypnotists, chefs, soldiers, bartenders and super dog trainers. I got to talk to a candy expert and I even got to experience what going on ride after ride after ride without waiting in line felt like — I don’t recommend it. The lineup/waiting process is so important in the avoiding-projectile-vomit aspect of visiting a fair. I also got eaten alive by mosquitos and failed a number of times at winning a Pikachu doll in the games and — oh yeah! I got to ride on top of a giant roller skate with the E Ville Roller Derby girls at the Capital Ex parade! :) 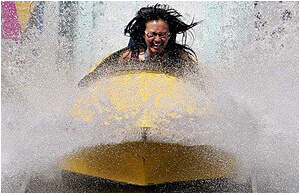 Here’s a list of most of my Capital Ex stories this summer: 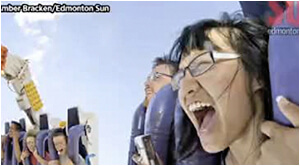 As I said I thought being on the Capital Ex beat was great experience. I got a chance to work closely with the Northlands/Capital Ex public relations people as well (Elise Holden, Sandra Pysklywyc and Randy Kilburn). I sent them e-mails every morning and saw them every afternoon either to set up interviews with said hypnotists/soldiers/chefs/etc and at the end of it all, Sandra told me that she had a great time working with me — she believes positive working relationships are key and that the work we’d done together was great. I really appreciated her words and I completely agreed. My interviews were set up without incident, I got all the stories I wanted (save for one! But that’s a separate story lol) and again, such a great experience! Also, the free water bottles in the media center were lifesavers. Daily lifesavers. The only thing that I didn’t really like about the beat was that every other publication/tv station is doing Capital Ex stories too, so they are bound to do something before you — which sucks — but at the same time I would do stories before them. My editor said that happens, especially in this beat. I wish I could have gotten all the “scoops” ! Although in this case, since there was no terrifying food or health infraction, or I wasn’t first on the scene of a rides malfunction, there weren’t really any scoop-able stories. Just nice ideas that made for nice articles in an overall nice week of coverage. Also, flashing my media pass and getting free parking and admission (and again, that free water!) was great! 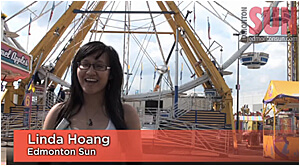 I wish that Edmonton Sun videos were embeddable but they aren’t! So I’m unable to post the videos I did :( In the gallery below though you’ll see screen shots of me in various Capital Ex video standups though, along with other misc. Capital Ex shots! :) So there you have it, a brief overview of working the Cap Ex beat. It was fun but I don’t think I could do it again… coming up with Capital Ex story ideas to fill a page for ten days can be taxing but actually, I think I probably could do it again, or at least I’d want to give it one more go — on the TV/video side of things! ;)

Linda Hoang is a Canadian blogger based in Edmonton, Alberta, who writes about travel, food lifestyle and pet topics. She's also a seasoned social media/digital strategist with a journalism background. Linda loves exploring the world with her husband Mike, eating their way through cities, supporting local businesses, and photographing Instagrammable Walls. She is the founder of the Edmonton International Cat Festival and a fur-mom to two cats and two dogs.
PrevPreviousNews: Capital Ex cleans up nicely
NextNews: Hip hop dancers hoping to hop a jet to VegasNext