Recap: Indulgence Edmonton 2015 – A Canadian Epic of Food and Wine

Indulgence brings together restaurants, food producers and winery/breweries, for a delicious event celebrating Canadian food and wine while supporting a great cause. Proceeds from Indulgence ticket sales go to the Junior League of Edmonton – an organization of women who promote volunteerism and supports the community through a number of projects helping Edmontonians in need. 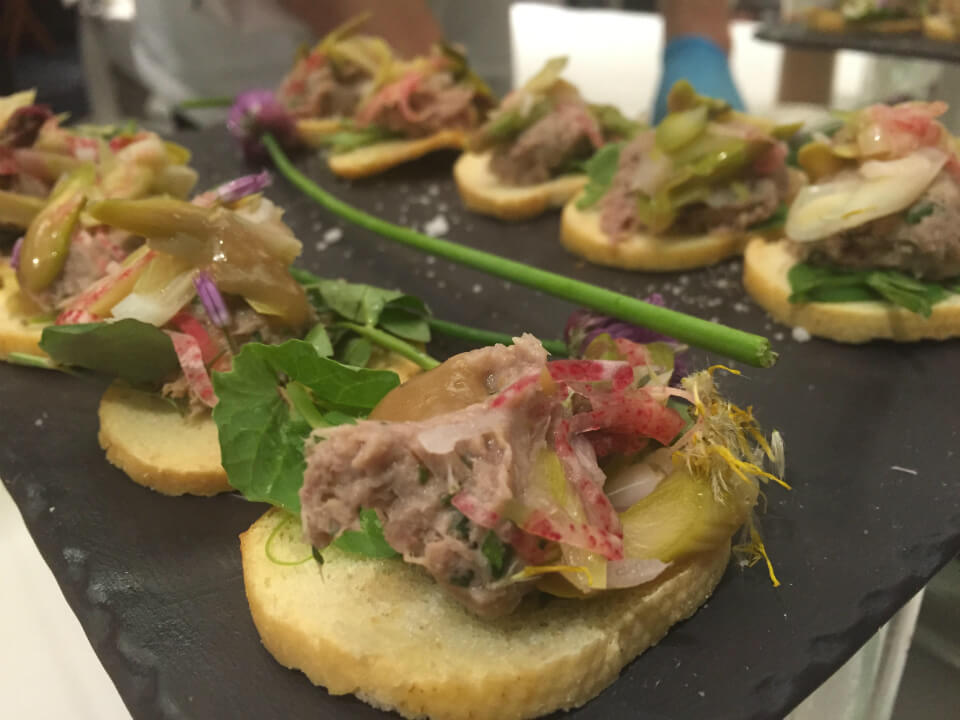 This year’s Indulgence was its 15th year – a remarkably long number of years – which really demonstrates the quality of the event.

It was my first time going and – honestly – I’d been seriously missing out for the last 15 years.

Although this year I was invited as a guest, after experiencing the event, I can say with certainty that the cost to get in is definitely worth it (and I plan to attend for as many years as it continues to be put on!)

For $80 a ticket, you get food and drink from 18 different teams featuring more than 50 restaurants / producers / winery/breweries. And really you can go back for as many seconds and thirds as you wish (until they run out of food of course, and you probably don’t want to do that immediately to be fair to other guests), so the value is just incredible. 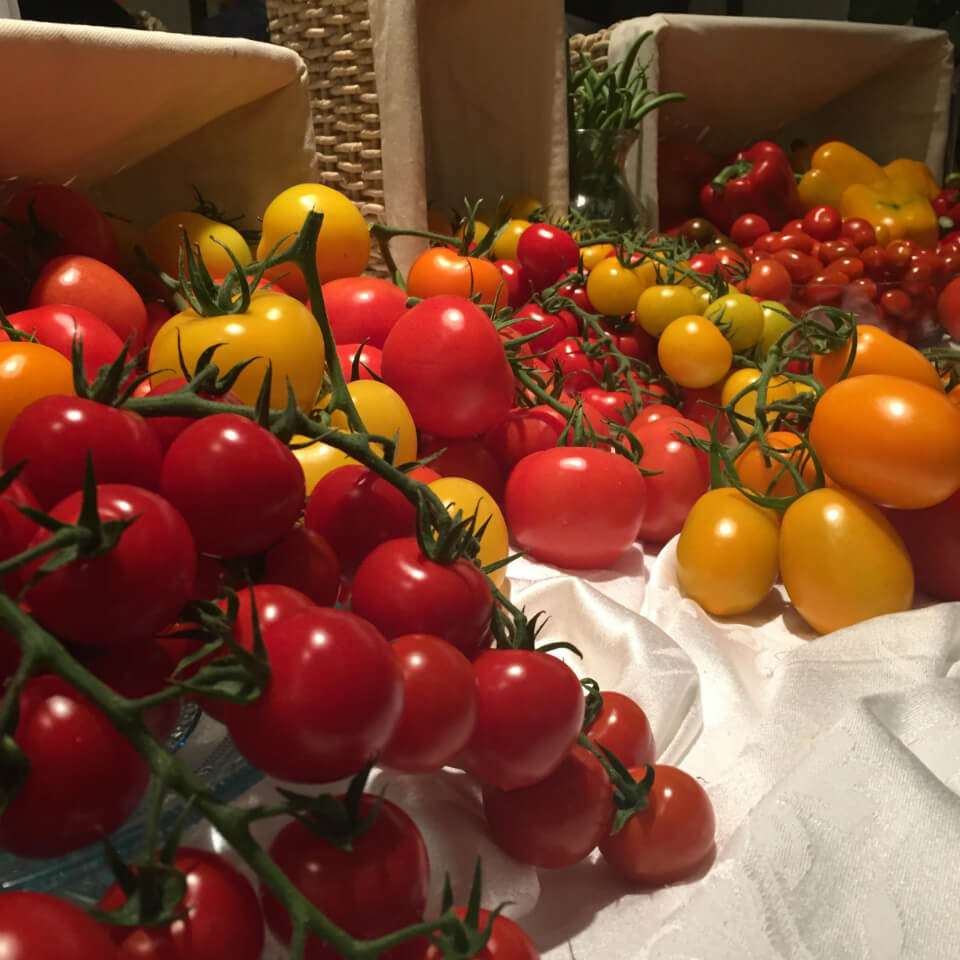 Restaurant chefs are paired with local producers and are tasked at coming up with a dish that highlights that producer’s product. Winery/breweries are added to the mix, to produce a beverage that will pair well with the dish the chef comes up with. 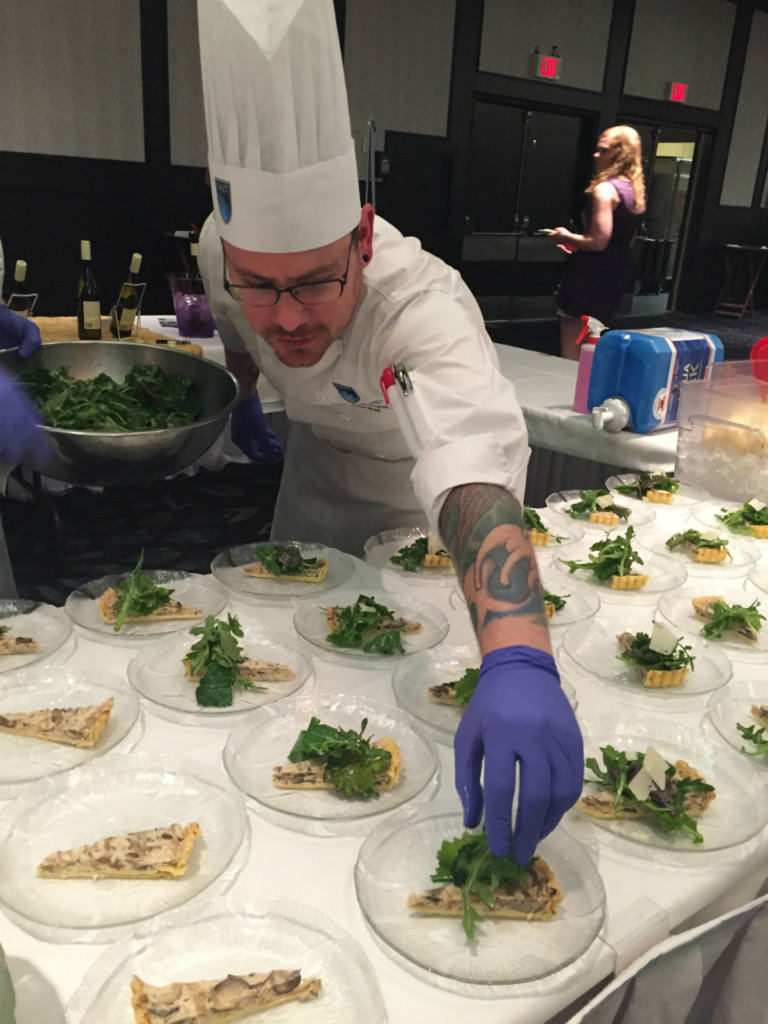 Joshua Ward with NAIT’s School of Hospitality and Culinary Arts puts the finishing touches on their Cheesiry Fresco Tart.

Mike and I ended up eating & drinking our way through Indulgence with friends Andrea and Gordon (see Andrea’s recap of the event here). They are seasoned Indulgence-goers so we had a pretty good system going to ensure that we were able to hit up all the different stations (and come back for seconds and even some thirds of some of our favourite dishes).

As this was our first time at Indulgence, we didn’t really have anything to compare it to – so really the first impression was fantastic. I thought the room was spacious enough so that you weren’t really bumping into others. There were hardly any long line-ups for any of the dishes – which was great. We really only stood in line for one dish – Tzin’s Ramen Terrine featuring Nature’s Green Acre’s Tamworth pork and eggs (came with homemade noodles, pickled wood ear mushroom, smoked porkfat and nori dust). 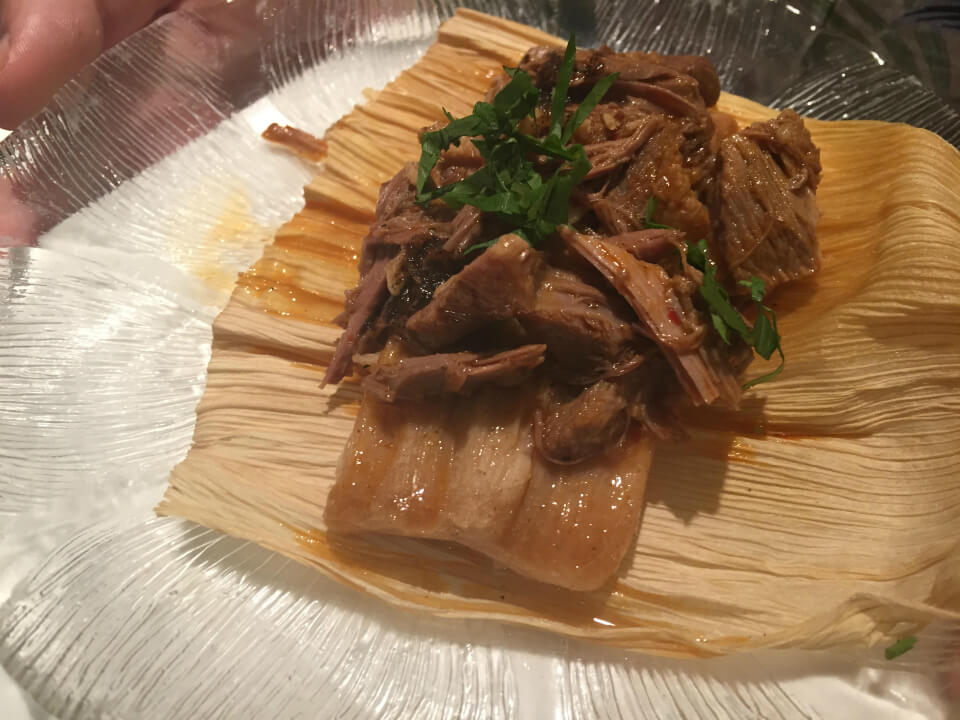 While the portions are really meant to be sample sizes, when you add up 18 sample sizes (+ drink), you’re going to leave stuffed. There was a friendly competition aspect to the night, where all attendees could vote on which dish was their favourite (People’s Choice). The People’s Choice winner receives $500 to donate to a charity of the chef’s choice. 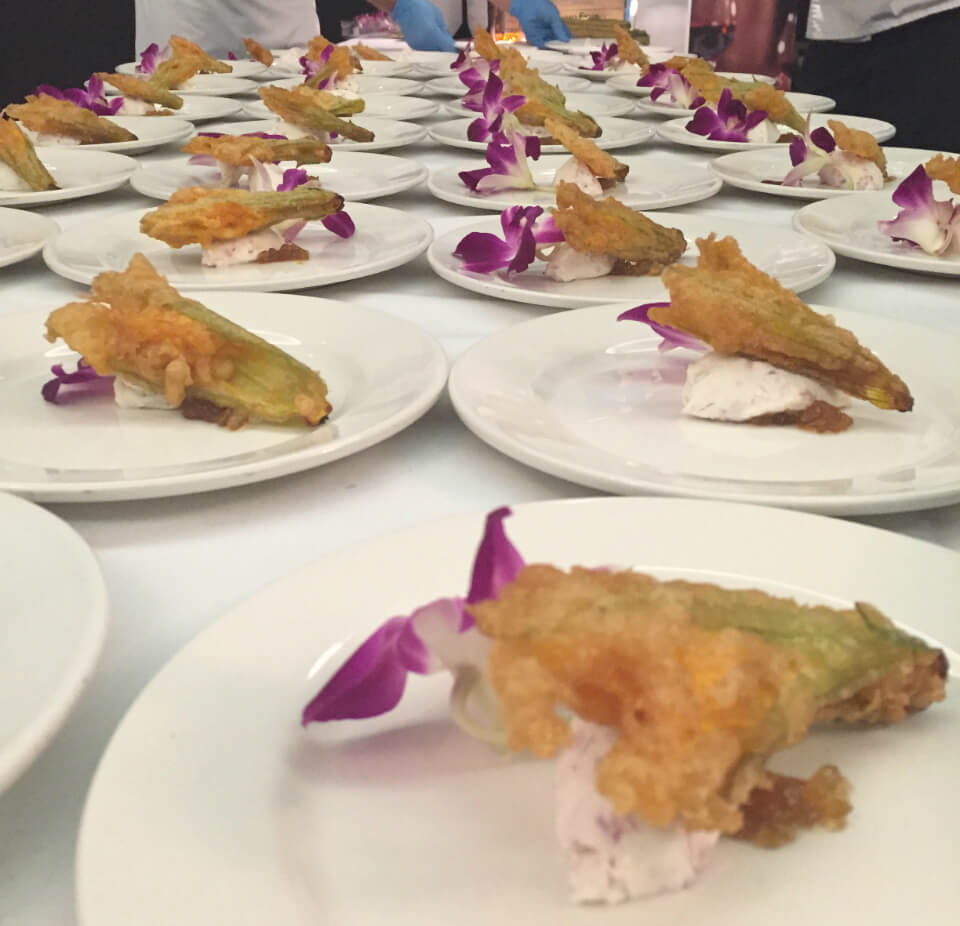 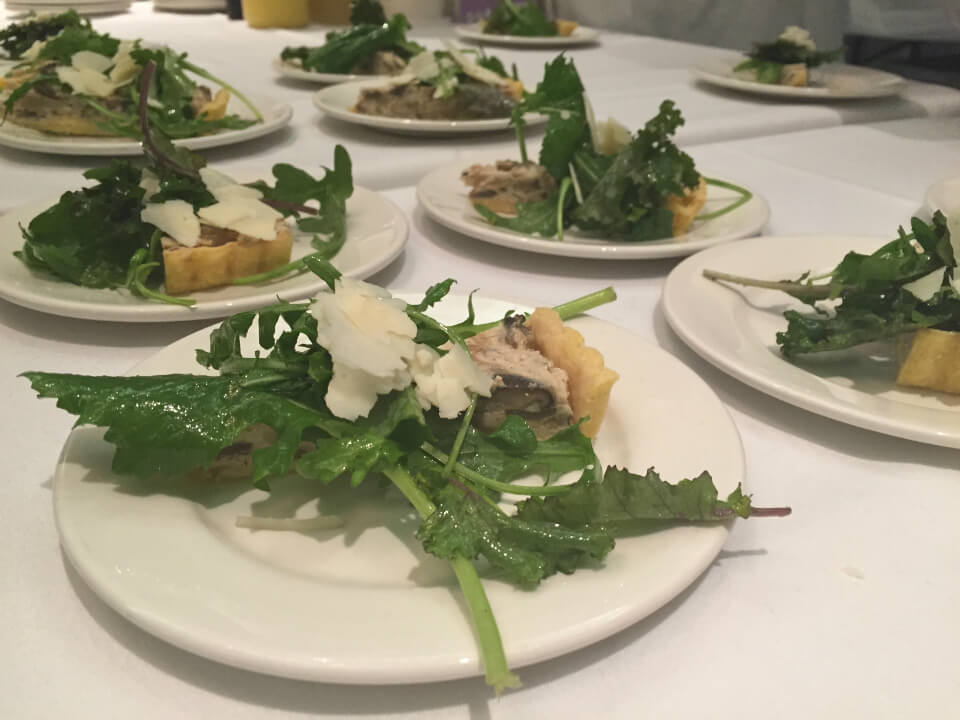 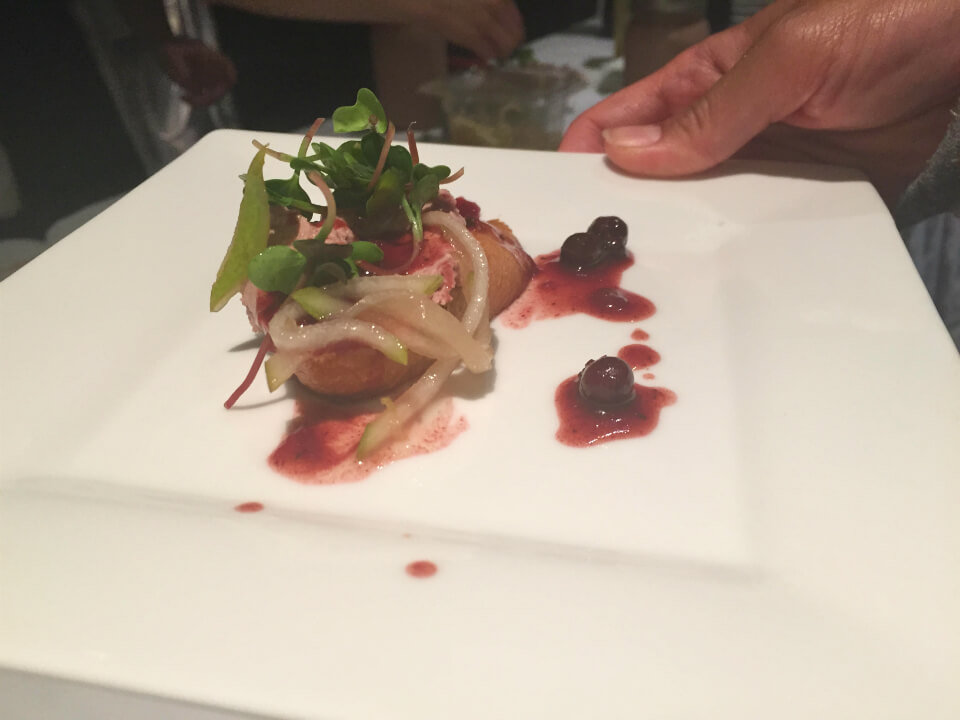 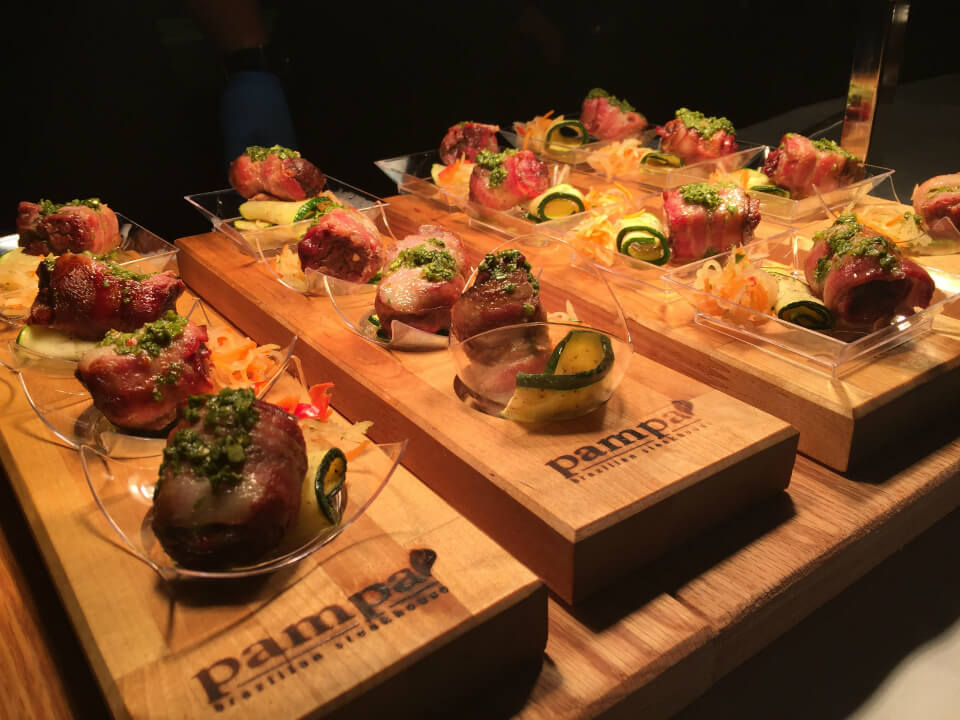 I also did really enjoy Tzin’s Ramen Terrine (probably more for the pork belly than the terrine) but still. I thought – such an odd concept, ramen broken down into a cold, pate-style dish, couldn’t possibly work, but I was pleasantly surprised. 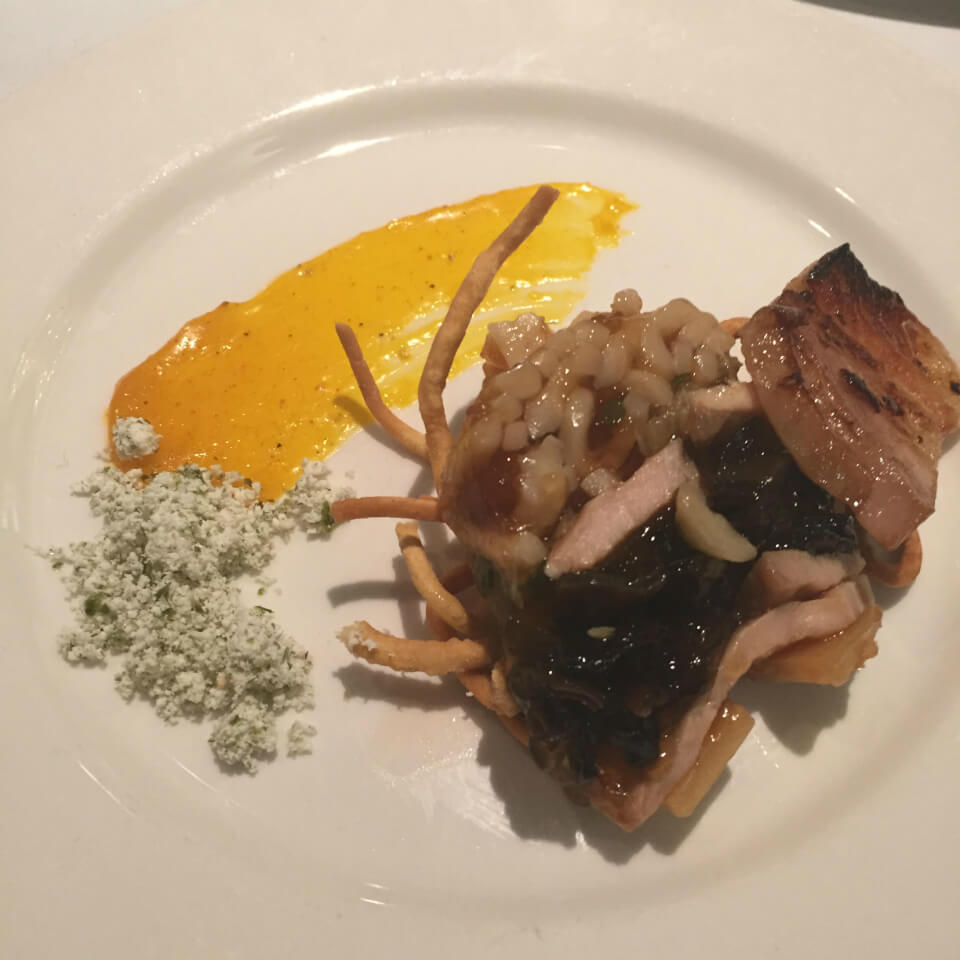 I have to note that Tzin’s pork belly was seared using a Searzall, which was just really neat to see. 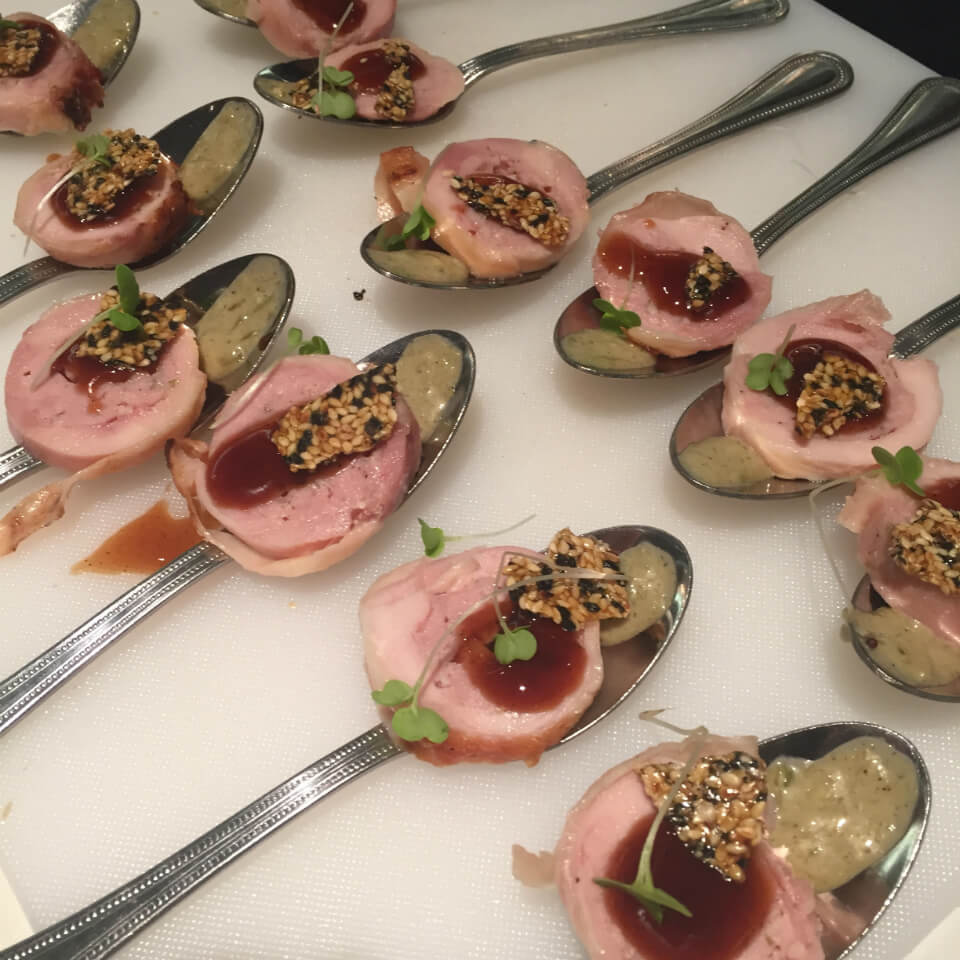 Throughout the night, you’re encouraged to chat with the chefs, producers and winery/breweries about the dish, their product, and what they do. It’s a great opportunity to get some one-on-one time with Alberta food producers. 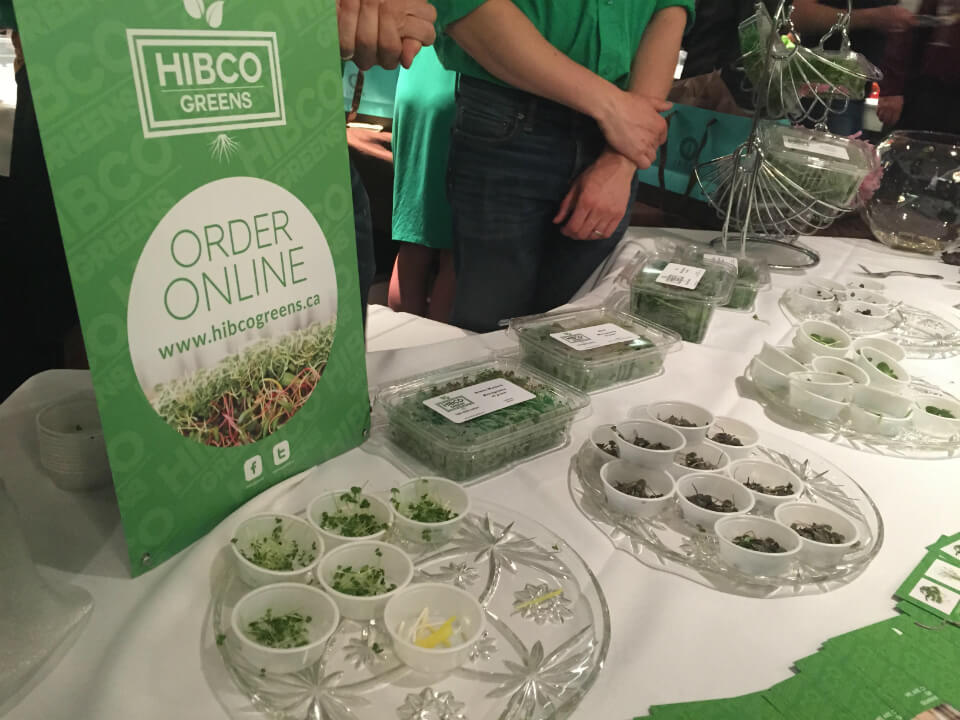 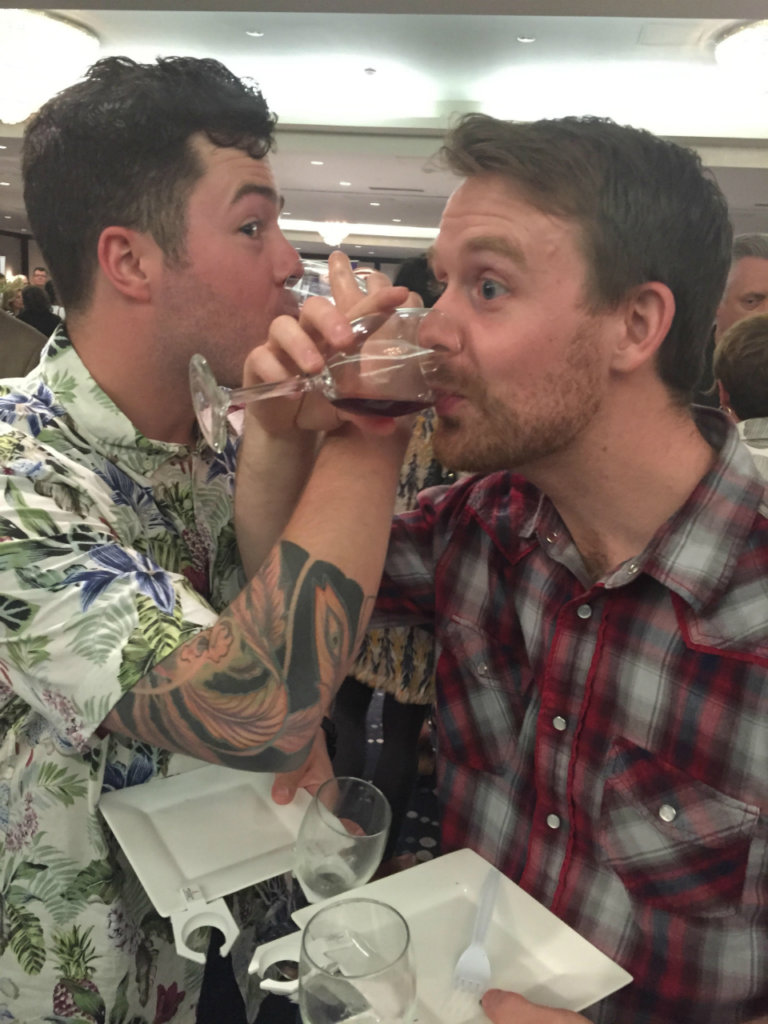 Mike and Gordon had a fantastic time at Indulgence (primarily drinking) while Andrea and I had an even better time (primarily eating).

Of course, not all of the dishes were knock-out. Some left us a bit disappointed, but then really you just move onto the nearly two dozen other stations. Some stations also started running out of food closer to 8:30-9 p.m. (the event starts at 6:30) so if you really do want to try all the food (which you should!) then you should go in with a bit of a game plan/strategy to ensure you don’t miss out on anything!

Overall, I enjoyed nearly all of the dishes at Indulgence, and I loved the energy in the room. The volunteers (who were from Junior League of Edmonton) were also amazing – quick to clear away empty dishes so we’d have room for the next dish. As I walked around I could hear so many different conversations around what went into this dish, what kind of product that producer sells, why this wine paired better with that ingredient, and what a great cause the event supports.

Truly, Indulgence is all about incredible food, wine, and giving back to the community.

It left such a positive impression on Mike and I, and we can’t wait to come back next June!

So, have you been to Indulgence? What did you think? What were your favourite dishes this year?

Linda Hoang is a Canadian blogger based in Edmonton, Alberta, who writes about travel, food lifestyle and pet topics. She's also a seasoned social media/digital strategist with a journalism background. Linda loves exploring the world with her husband Mike, eating their way through cities, supporting local businesses, and photographing Instagrammable Walls. She is the founder of the Edmonton International Cat Festival and a fur-mom to two cats and two dogs.
PrevPreviousGiveaway: $50 Gift Card to Edo Japan – Happy International Sushi Day!
NextSocial Media Notes (#72) – Links for the Week of June 8 – 21Next