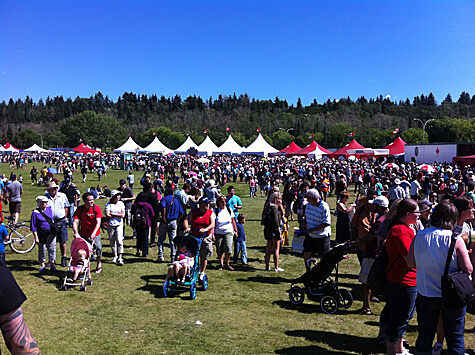 I went to the Heritage Festival for the first time ever on Monday! It was crazy busy, there were SO many tents! It was like a Taste of Edmonton on steroids, really. It seemed no matter how far we walked, there were never-ending food tents! After we donated some items to the Edmonton Food Bank, we went to get our food tickets!! Mike and I had received 10 free food tickets before the fest and then we bought 30 more tickets for $25 once we got there, so we were ready to get our Heritage Fest-on! :)

There were five people in our group and between us all we tried the following:

The “Kvas” drink was the first thing we tried and it… was… terrible! LOL. We were told it’s Russia’s most popular drink but we couldn’t believe it — one of the weirdest-tasting, face scrunching drinks I’ve ever encountered. 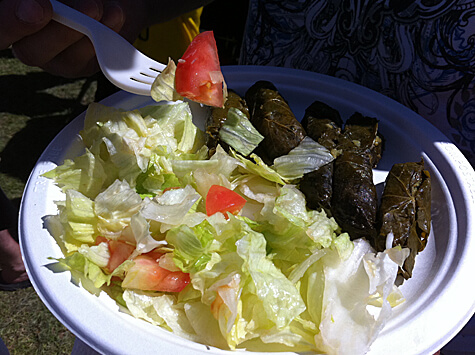 Iraq’s “Dolma” was pretty good! Ground meat and rice wrapped in grape leaves with salad. My friend thought it was slightly sketchy that it said “ground meat” but didn’t specify which meat was in it, LOL, but it was good. 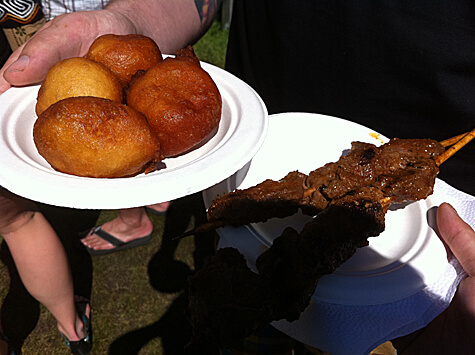 Nigeria’s “Suya” – marinated beef – was SO delicious!! We were just walking by and saw the chefs cooking and throwing all of these herbs and spices on the meat, it smelled great and it was great! It was spicy, juicy and only 4 tickets for two skewers! Great deal. The chefs recommended eating “puff puff” buns with it but I didn’t think the buns were anything special, I wish I had gotten two sets of Suya instead! 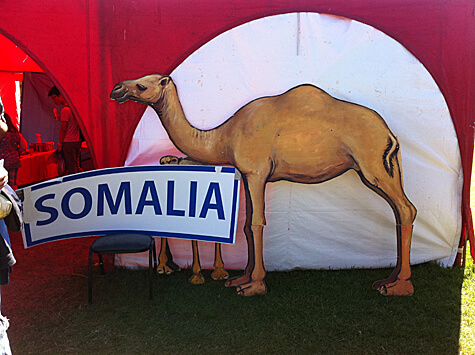 We went on a search for “Camel Meat” at the Somalia site. The way we started our food route, it took us hours to get to where Somalia was. One friend was even saving his final tickets for a taste of the camel meat but alas, when we finally arrived… 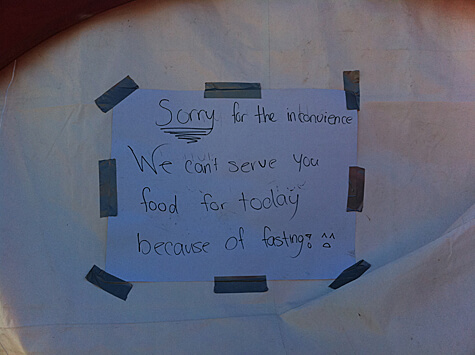 Search for Camel Meat ended up in disappointment at the Somalia Tent!

SO disappointed. And I would say poor planning on the site organizer’s part. We really wanted to see what camel meat tasted like! And we had literally scaled the entire park to get to the Somalia site, only to walk away disappointed. 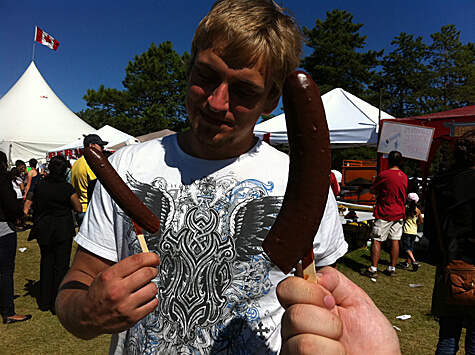 We saw a ton of people walking around eating “Frozen Bananas Dipped in Chocolate” from Peru, so a few people in my group wanted to try some too. It’s a fun looking festival treat but I didn’t think it was that good. 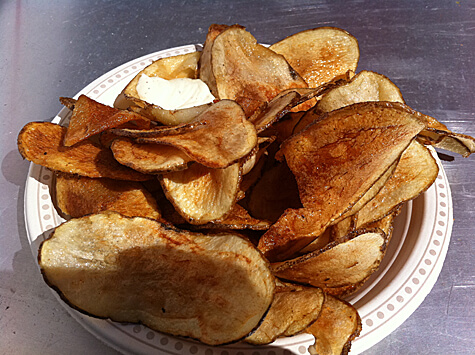 I was STOKED to find a potato chips-style food via the Nicaraguan site. “Patatas Bravas with Alioli” dip was one of the best foods of the fest! (I’m hugely biased because I absolutely LOVE chips though lol). The line up was extremely long for it and it also moved extremely slow, but was definitely worth it. They put some kind of spice on it so that it doesn’t taste like your average potato nachos/potato chips. And the alioli dip (garlic mayonnaise) was really good! A definite must-eat. 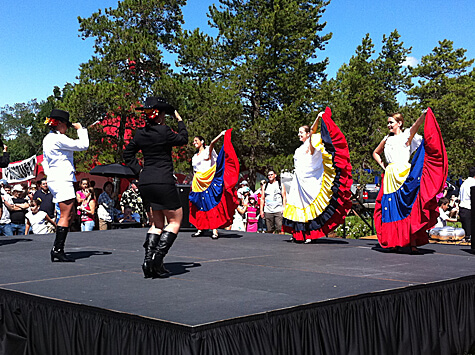 We didn’t actually sit and watch any of the pavilion performances – which I’ll make sure we do next year. We caught the festive singing and dancing acts as we walked by the food booths but really taking in the cultural performances aspect of Heritage Festival was lost on us — we just cared too much about the food, hehe. But I did catch a little bit of Germany, Japan and Greece’s performers and also China or Hong Kong’s lion dance. 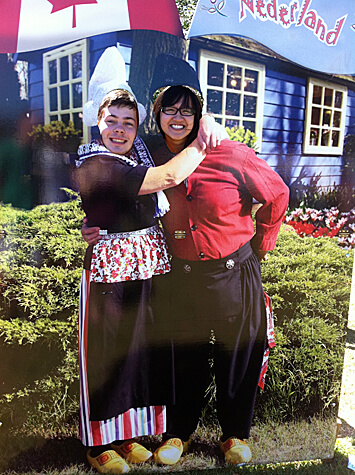 And we did participate in some picture taking at certain sites though — this funny one in the Netherlands and we also got a photo with the Vikings by the Scandinavian site, hehe.

It was fun to be able to use the phrase “oh let’s go to Scandinavia. Is Taylor still in Hungary?” as if we were actually in these countries. The line ups weren’t too bad early on but as the day went on, every line seemed to double in size. It was kind of lame that you can only get water via tickets. We brought two water bottles but went through those quickly. It just seemed like a waste of tickets to spend on H20 (so we didn’t, lol). And there was definitely NOT enough napkins! I ended up bringing some from home anyway because I saw @MonolithDigital‘s Heritage Festival tips tweet and it included – Bring your own Napkins! Definitely came in handy.

I didn’t try anything in the Asian countries because I felt that would have been a waste of tickets and a waste of the event since I get Asian food all the time, lol. I was pleased with the different foods/different countries I did try, and for the most part I definitely wasn’t disappointed! The Kvas drink was really the only thing that any of the people in my group disliked, lol. Everything got good or glowing reviews.

The weather was perfect. The sun was shining, there was just the perfect amount of wind, and the sky was so beautifully blue. It was a gorgeous day spent at Heritage Festival and I’m so pleased I finally went! I think it’s kind of unfortunate that every food dish seems to cost so many tickets (6 and up) whereas Taste of Edmonton 5 tickets is basically the max a dish will cost you – but the portion sizes at Heritage Festival were pretty big, and you can find those rare delicious and filling foods for less tickets (like the SUYA!!)

I was disappointed because I thought we had hit up EVERY booth but by the time we ended up going home I realized I completely missed wherever Israel was and I had also missed the Irish and Caribbean booths – both of which I had wanted to try some food from (stew at Ireland and jerk chicken in the Caribbean!) but all in all I think we did stop by most of the booths.

I can’t believe it’s taken me this many years to finally get my butt to Heritage Festival. It was a ton of fun, great food, great sights, great sounds and just the perfect Summer event. A definite must-return for next year. And if I had to choose between one food festival for the summer, I’d definitely choose Heritage over Taste of Edmonton!

What did you think of this year’s Heritage Festival? What were your favourite dishes?!

I think the next summer fest would be the Folk Fest, which I’m not going to, but I’m looking forward to the one after that… Fringe Fest! :)

Linda Hoang is a Canadian blogger based in Edmonton, Alberta, who writes about travel, food, lifestyle and pet topics. She's also a seasoned social media/digital strategist with a journalism background, the founder of the Edmonton International Cat Festival and co-founder of Stop Race Based Hate, an online anti-racism education tool. Linda loves exploring the world with her partner Mike, eating their way through cities, supporting local businesses, and photographing Instagrammable Walls. Linda is a fur-mom to two cats and two dogs.
PrevPreviousClicks of the Day: Monday, August 1, 2011 Edition!
NextClicks of the Day: Tuesday, August 2, 2011 Edition!Next