On Sunday, as part of Alberta Open Farm Days, I went to Northlands for an outdoor Urban Farm Dinner! More than 70 farms, producers, and organizations across the province, including Northlands, were running tours and various farm-themed events and activities all weekend for the annual, two-day event. 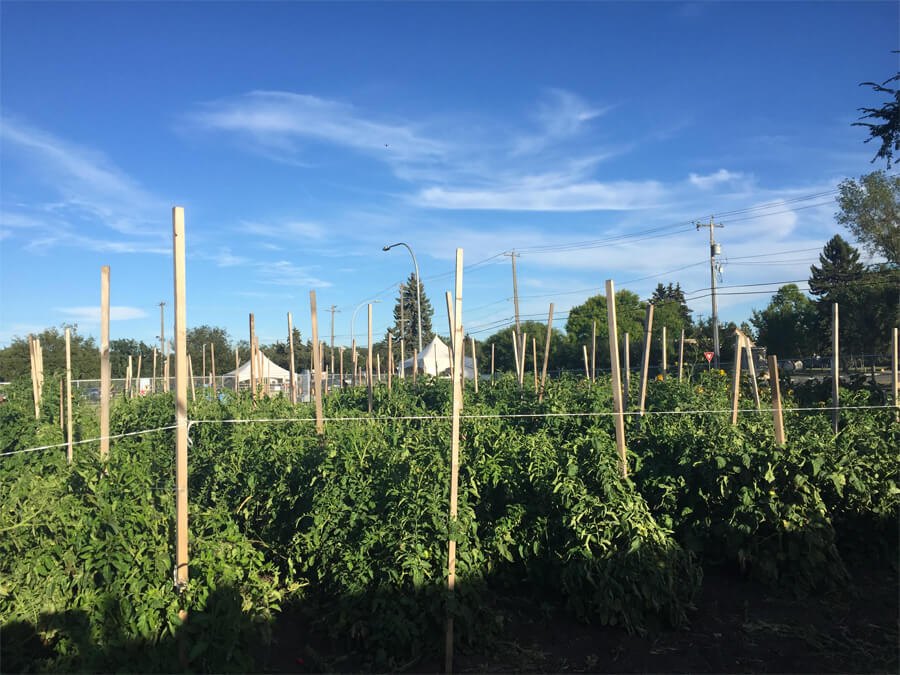 Alberta Farm Days is meant to give Albertans a chance to experience local farms and understand where their food comes from. They describe it as: “a backstage pass to meet the farmer, experience Ag-tourism in Alberta and taste local foods direct from the producer.” 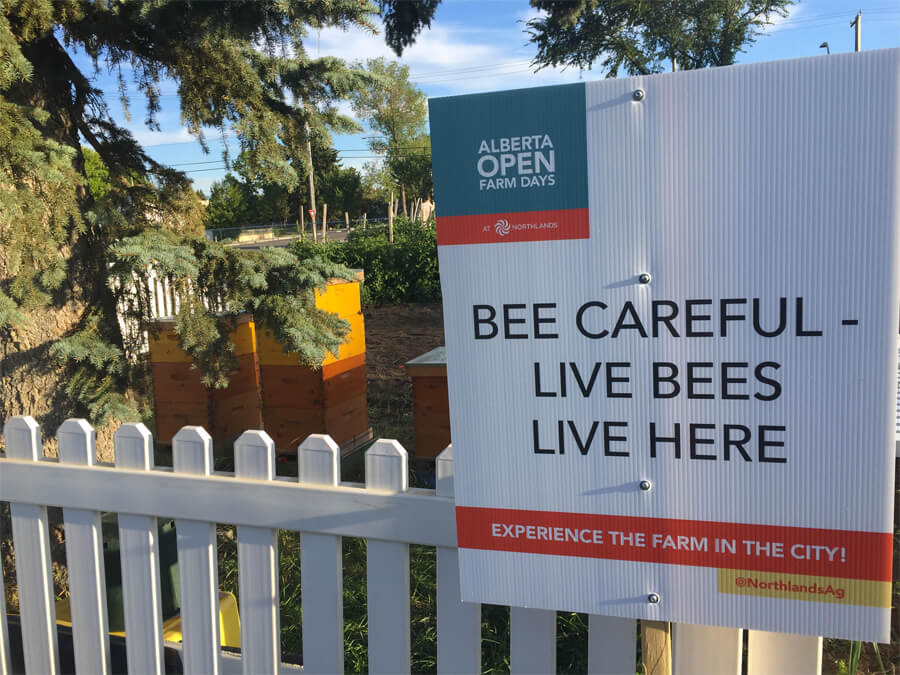 This year’s event (2015) was the third annual Alberta Open Farm Days. I haven’t been able to attend previous ones (that third weekend of August is always so busy!) and I couldn’t attend most of this years as I was in Las Vegas for a wedding, but luckily, Northlands was doing their outdoor Urban Farm Dinner at 7 p.m. on Sunday – which gave me a couple of hours after my flight landed back in Edmonton! 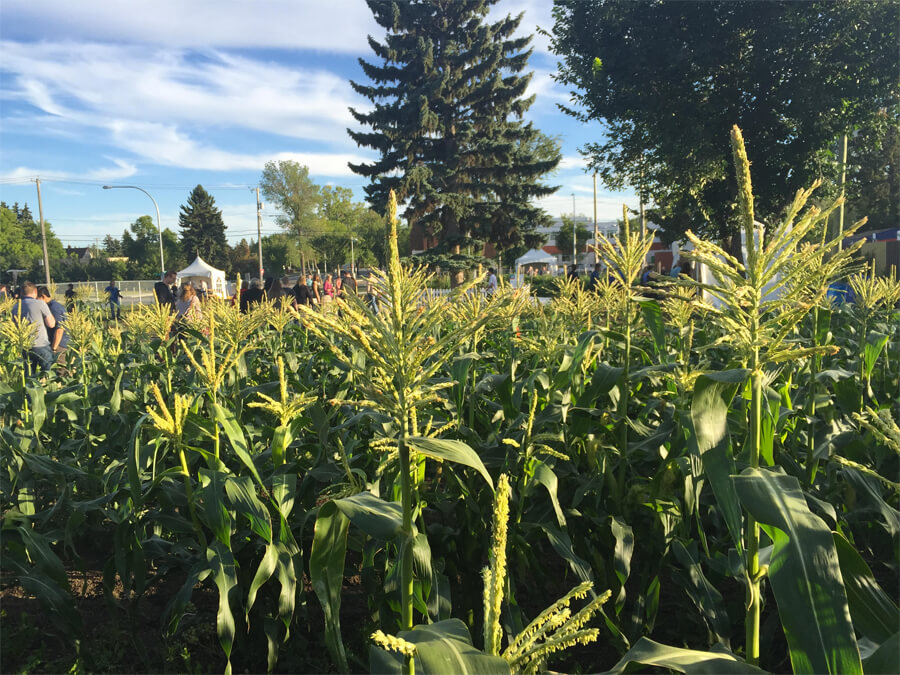 Northlands’ Urban Farm + Lactuca Corp. is located at 79 Street and 113 Avenue. It’s the first Urban Farm in Alberta, founded in 2012 as a backyard project selling through the 124 Grand Market. I’d heard of Lactuca before, and have even had their greens before, but didn’t actually realize until this Farm Dinner that they were partnered with Northlands and right here in the city. 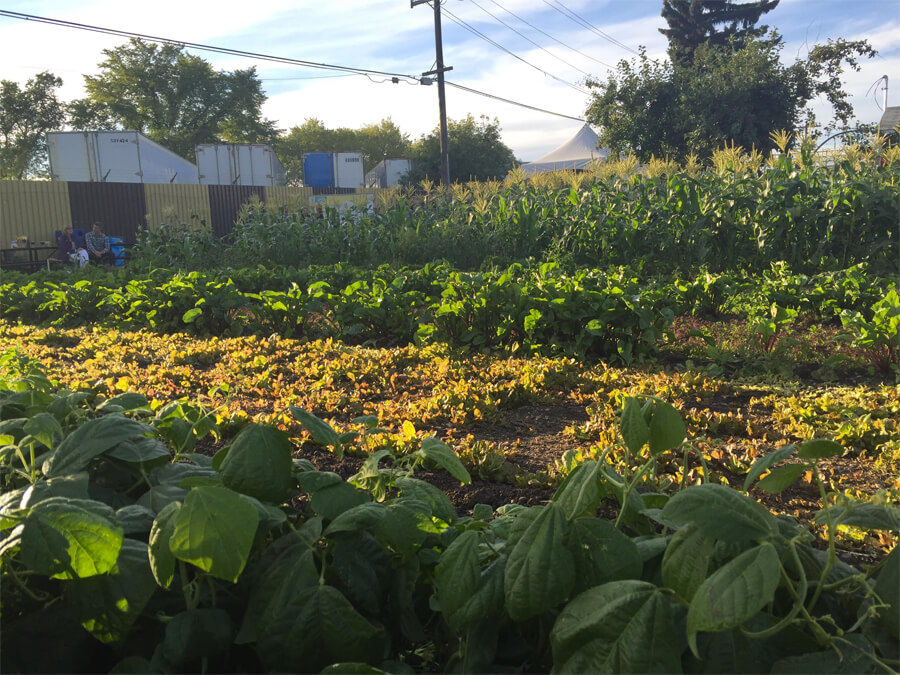 Over the last few years, they’ve expanded from being a backyard project, to taking over the whole southwest corner of Northlands – a 31,200 square-feet of urban farming space! Lactuca primarily grows different types of salad mix that is sold at the 124 Street Grand Market, local restaurants, and used in Northlands’ kitchens. 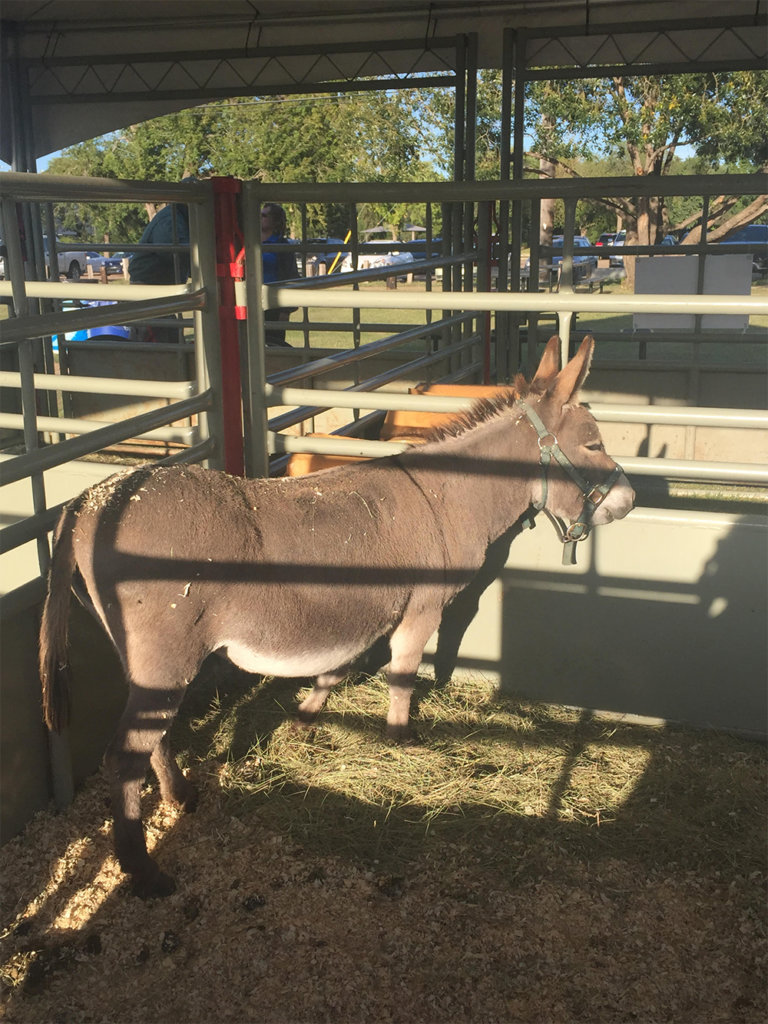 A quick visit with Reese’s Pieces the mini donkey.

My date for the night was my friend Catherine. As soon as she arrived, she obviously had to visit Reese’s Pieces the mini donkey, who was just getting ready to leave after a full day at the Alberta Farm Days petting zoo. That’s just one of the types of super family-friendly activities going on at Northlands but also at farms across the province for Alberta Farm Days! 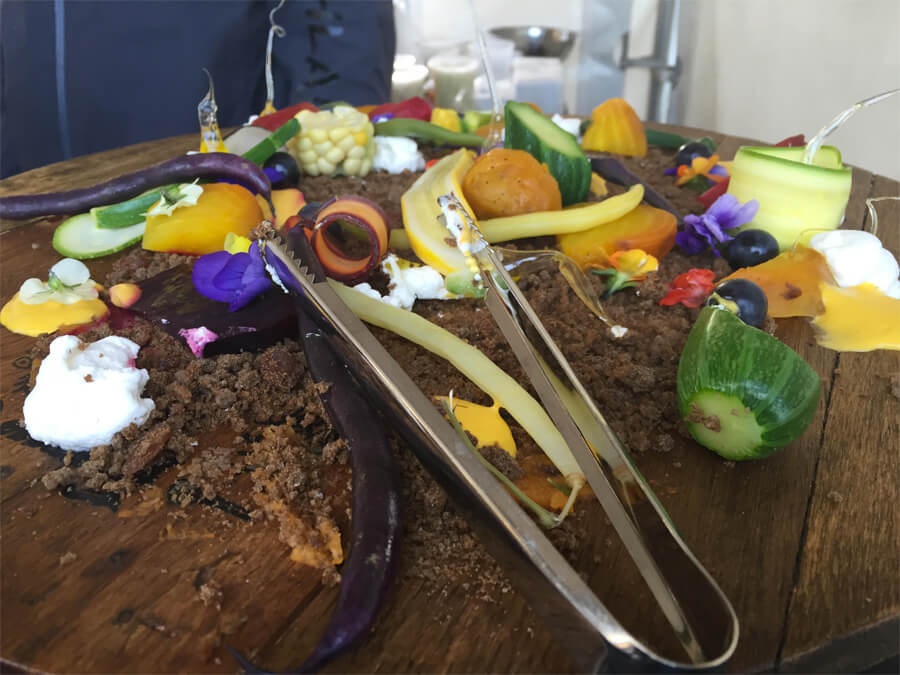 The Urban Farm Dinner featured eight courses – inspired by various aspects of farm life. Food stations were broken into themes including from the pasture, from the ground, from the lake, from the pen, etc. There were tables set up running the length of one side of the farm, where you could sit with your dishes after you picked them up at the food stations. Beyond that, you’re free to wander on your own to whichever station, in whatever order and at whatever pace you like. 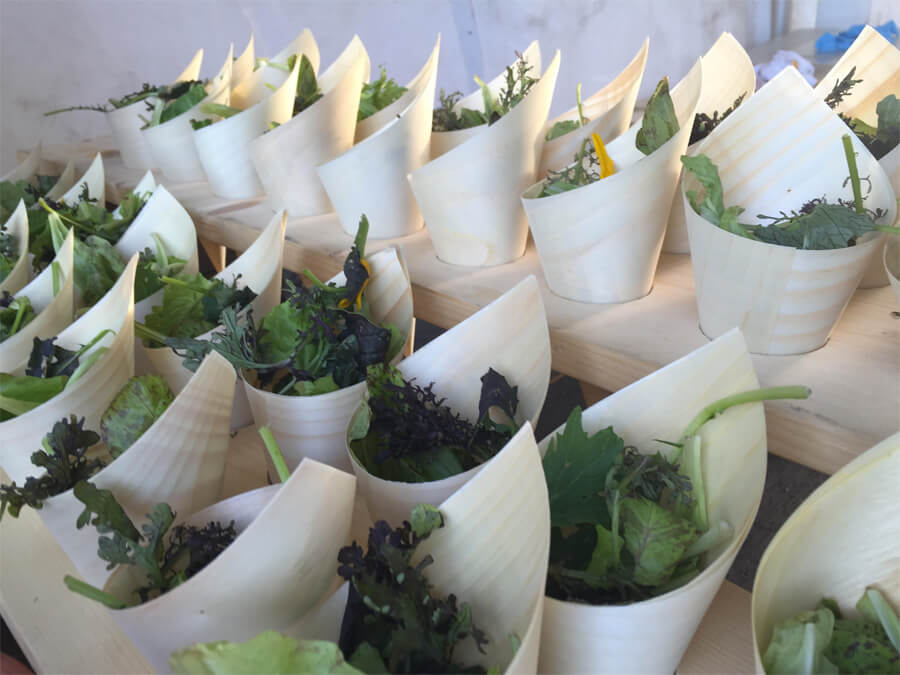 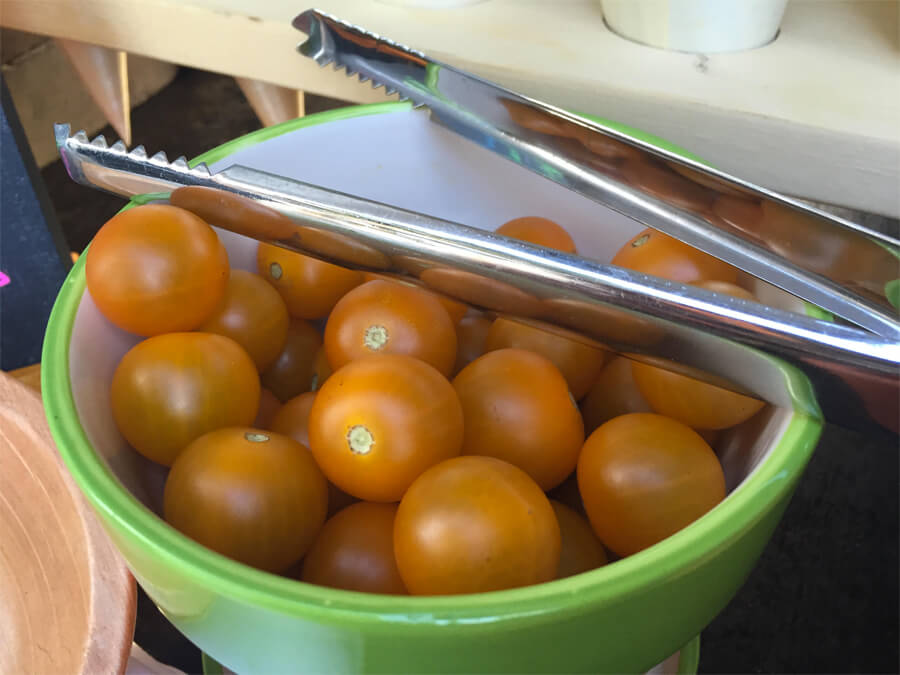 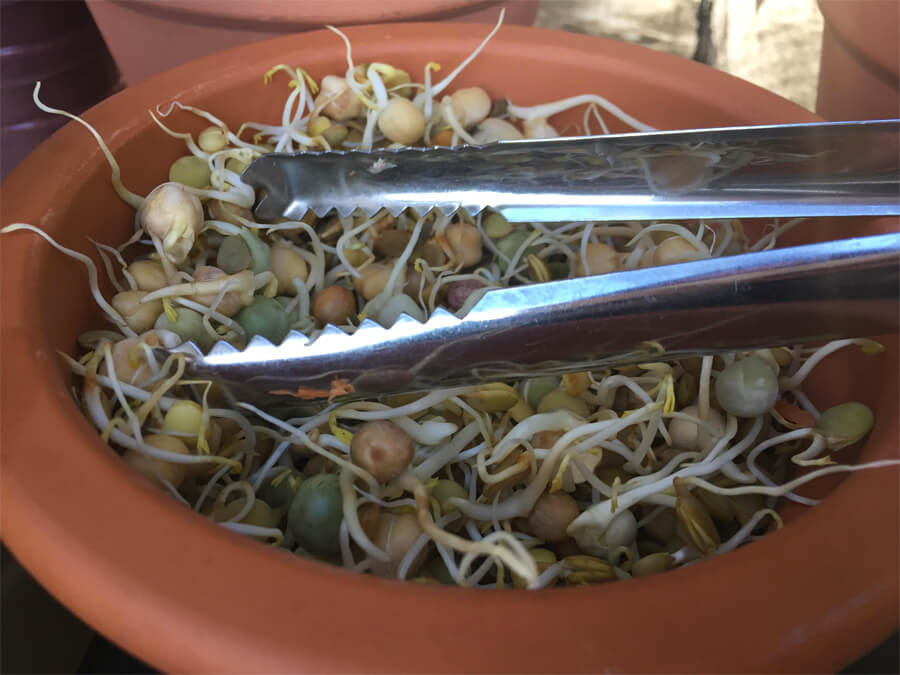 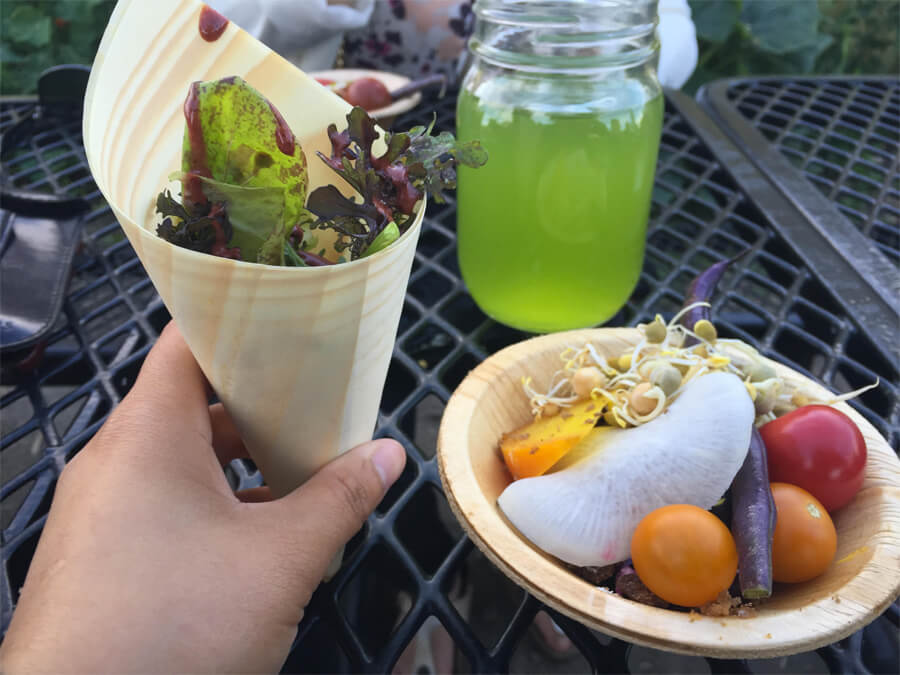 My DIY salad at Northlands Urban Farm Dinner. The incredible pecorino cheese mousse is unfortunately buried beneath the veg!

For the first and second courses we hit up the Do It Yourself salad bar featuring Lactuca lettuce, vegetables and house dressing, along with warm smoked beets and vegetable salad, with a delicious pecorino cheese mousse (!!!!) using The Cheesiry cheese, caramelized olive oil, and ‘edible earth.’ Supplied by: Lactura, Sunrise Gardens, Sundog Organic Farms, Erdman’s, Neffis Lezizz, The Cheesiry, and Hibco Greens. 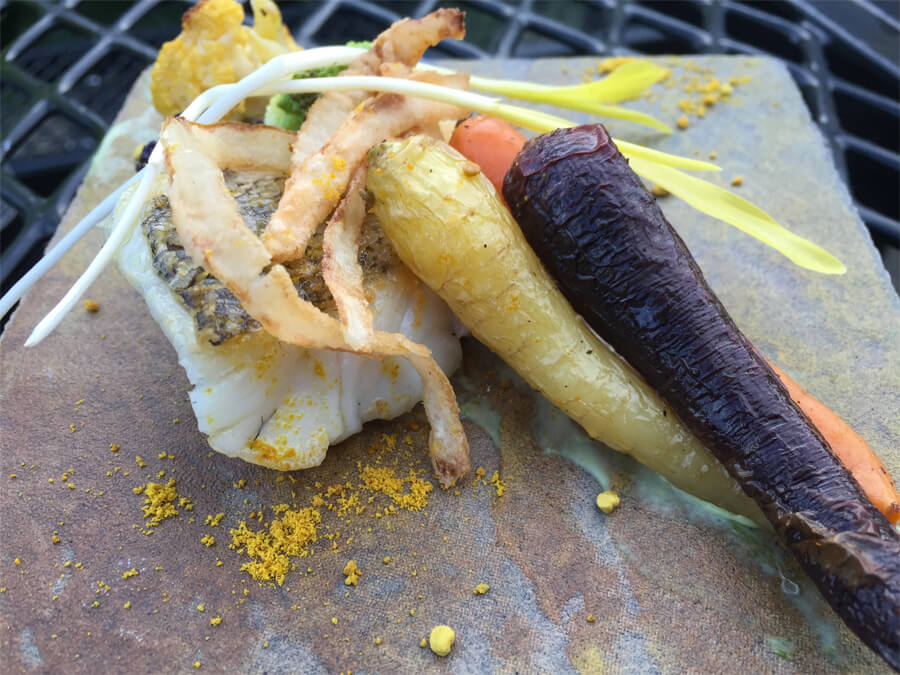 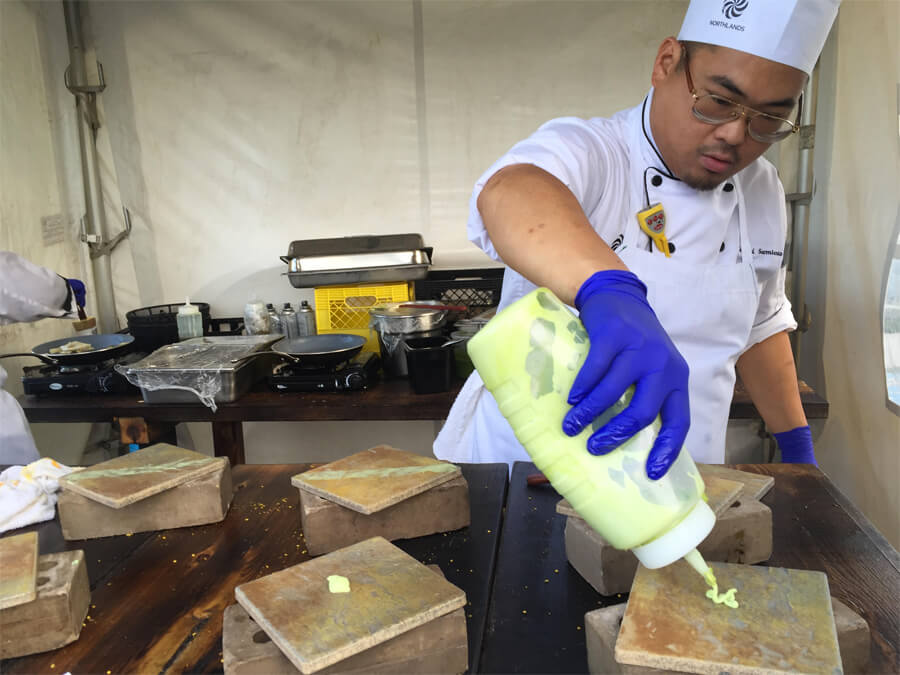 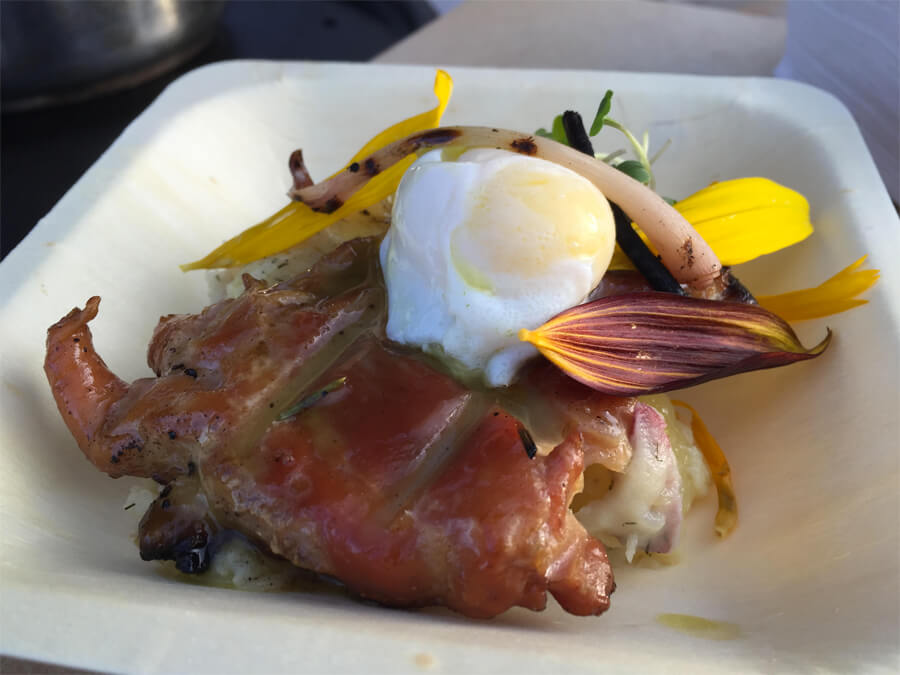 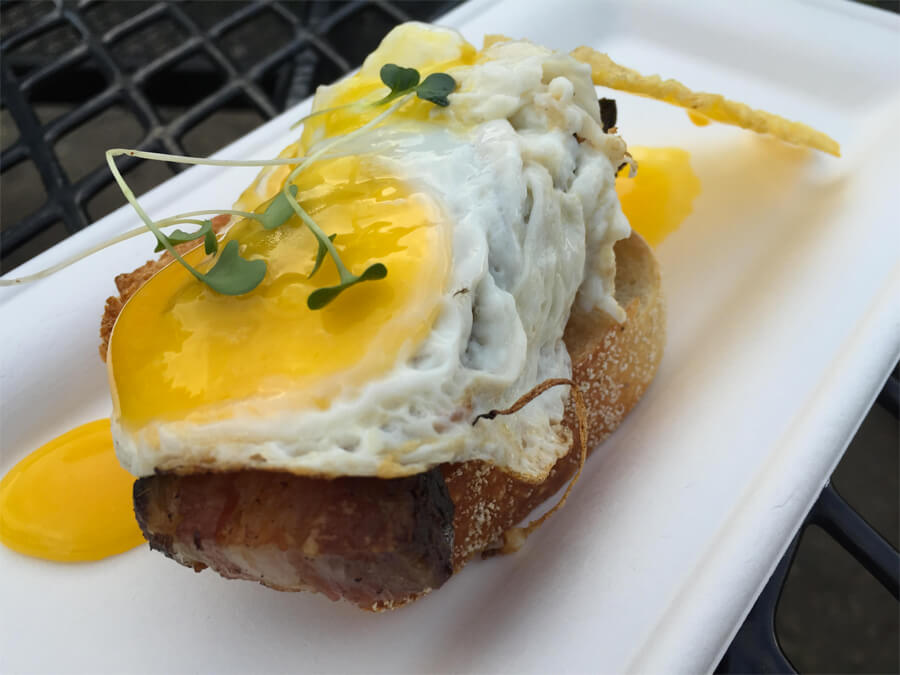 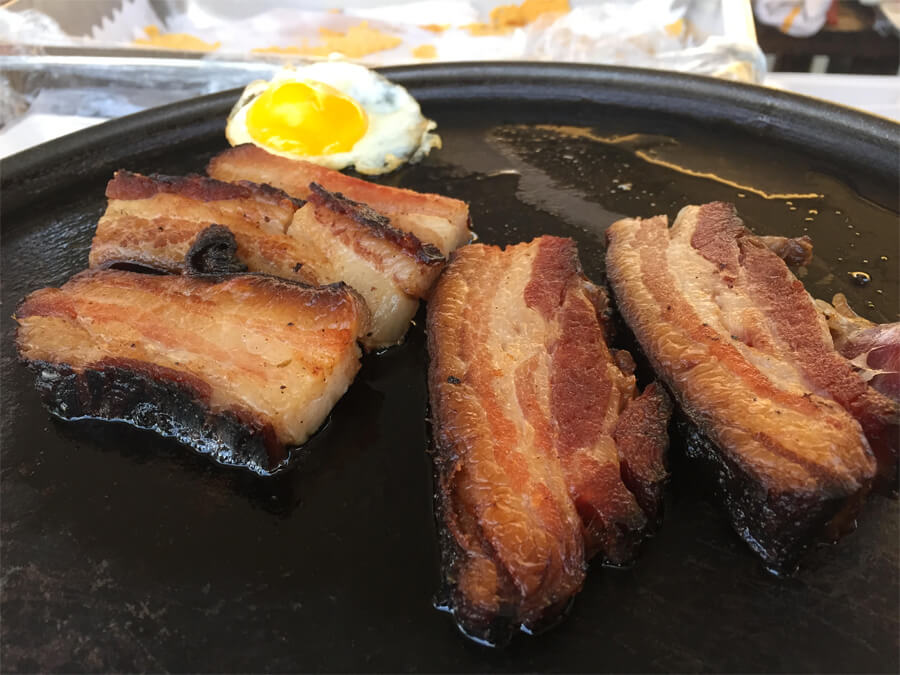 You need a close-up of the pork belly and fried egg, obviously. at the Northlands Urban Farm Dinner. 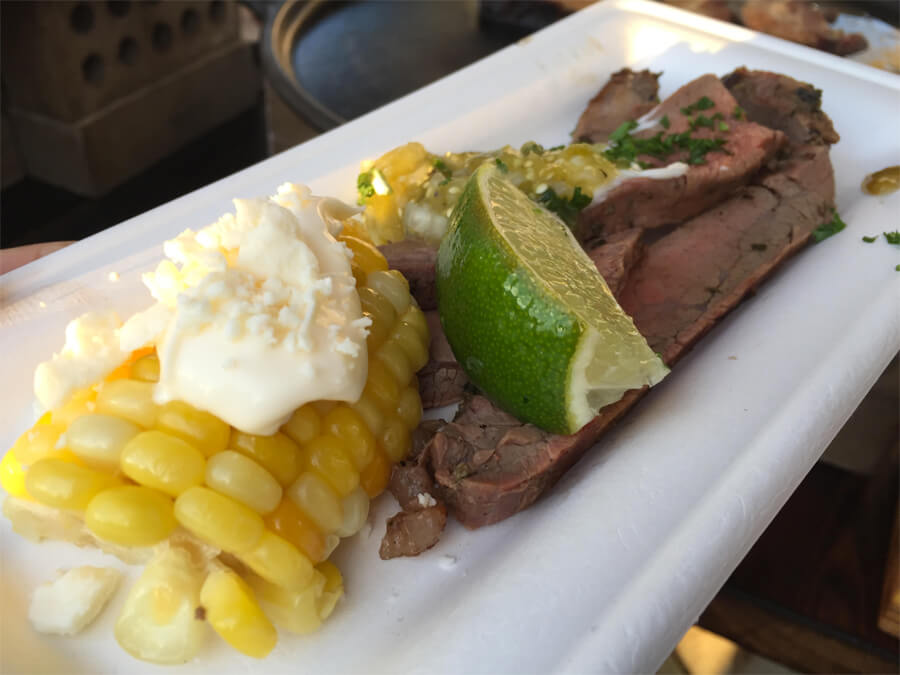 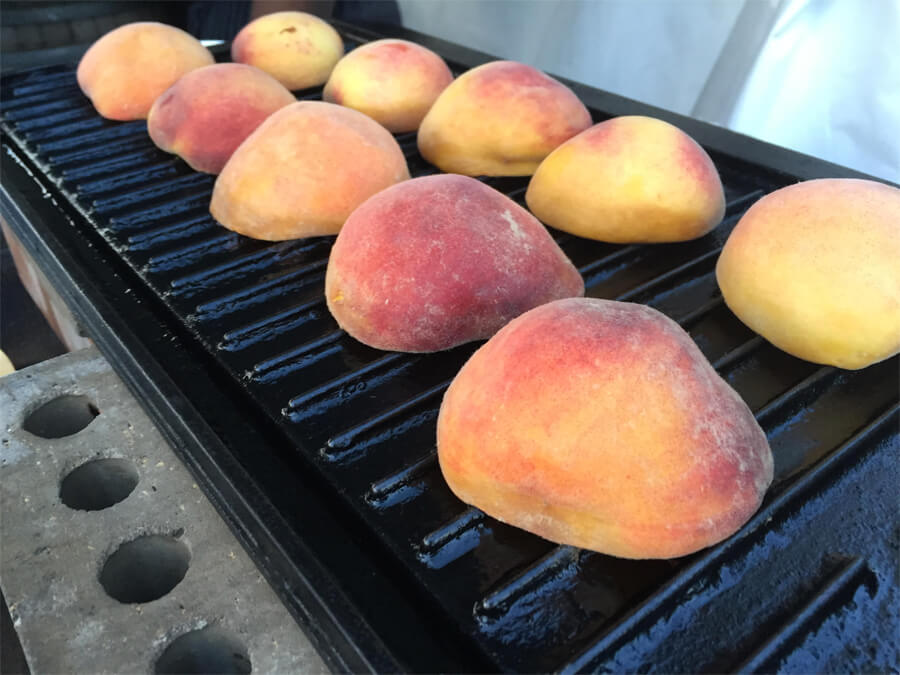 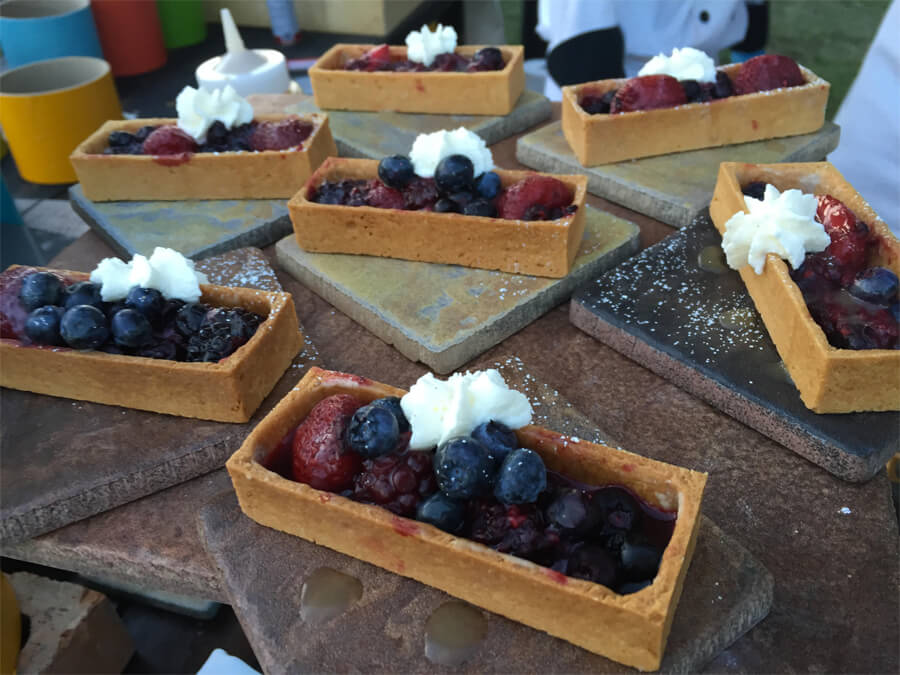 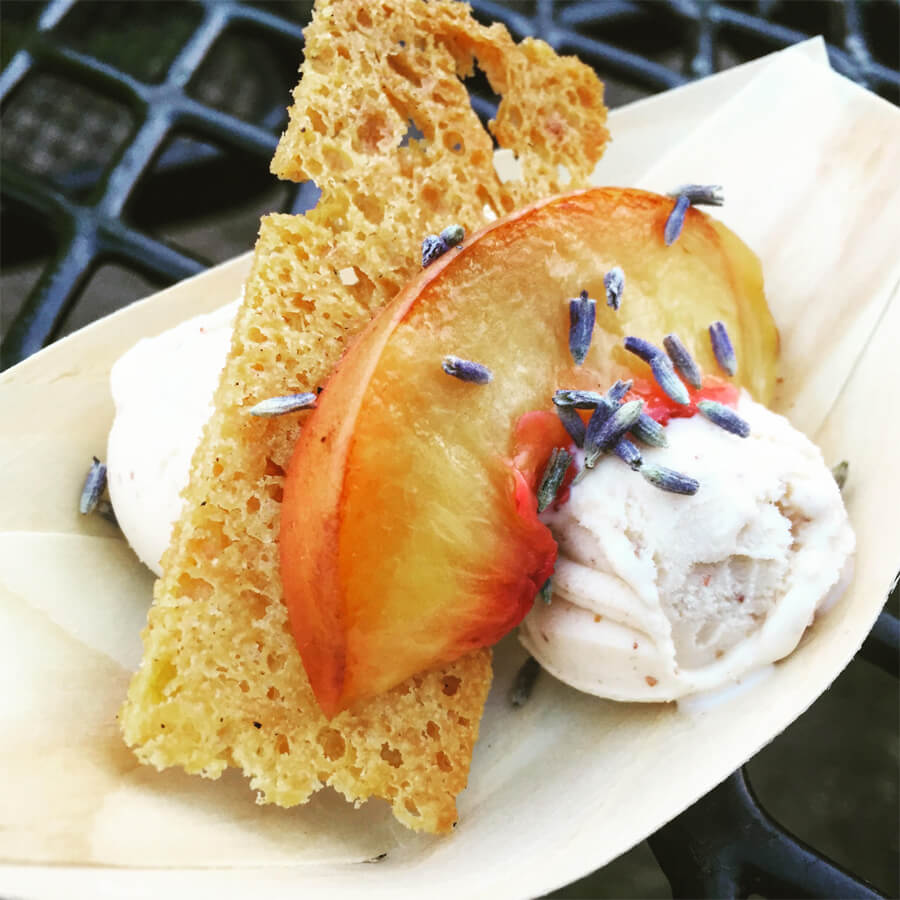 And the last two courses were dessert: an incredible smoked almond ice cream with honey soaked grilled peaches, lavender, and a lemon cake cookie, along with a berry tart with maple sauce and chantilly cream. Supplied by: Pinnochio Ice Cream and Lactuca.

My favourite dishes of the night were the smoked almond ice cream, the seared pickerel and veg, and the pork belly with fried egg! I also could eat gallons of that pecorino cheese mousse! YUM! Vegetables are all fine and good but the mousse brought it to another level.

I thought the chicken was a bit on the salty side (but the smashed potatoes were lovely), and my flank steak came out a bit colder than I’d prefer, but overall, a great – filling meal, and truly, what a lovely, lovely summer evening! We couldn’t have asked for better weather, and I can’t say enough how many times I just stopped and thought how cool it was that I felt like I was on a farm – but I was a couple minutes away from Commonwealth Stadium.

Although I was invited as a guest, at $80 per person, I do think there is value here. The portions were good sized (smaller, but then you do get eight plates so you’ll fill up!) The food was great (plus awesome that you’re eating local and supporting local). The atmosphere was also fantastic. I did think the format of the dinner was a bit awkward and not what I was expecting (it was more cocktail party like – standing, stopping and grabbing your own dishes. Although a perk is that the lines moved quite quickly). I also was a bit disappointed that there wasn’t really any formal event or information/tour. There was a quick welcome but then we were left on our own (there were lots of tours if you came to the morning/weekend events, but I didn’t and I don’t think you can assume people who attend the dinner have also come earlier in the day for the tours).

Normally I would be fine with being left to do my own thing and explore but in this case I was so intrigued with the urban farm concept that it would’ve been nice if there had been designated people talking up the different areas or the different farmers/producers sourcing the meal (or even more signage to describe aspects of the farm). I definitely appreciated the boards listing out the food and supplier information though! Still, the cost is on the more expensive end for things you can do during Alberta Farm Days, but also on par (and cheaper) than some other culinary experiences. My friend Addie (@BigAddie) was cooking as part of the ‘Five Stages of Pecorino’ at The Cheesiry that I would have loved to go to as well! Most of the Alberta Farm Day activities/tours are free.

Lovely to learn about the Northlands Urban Farm Dinner!

I wish we had been in town to take in the other Alberta Farm Days festivities but I am really happy I was invited to and got to attend the Northlands Urban Farm Dinner to check out this piece of farm life right in the heart of Edmonton. Watch for next year’s Alberta Farm Days on the third weekend of August – follow Alberta Open Farm Days @OpenFarmDays on Twitter for updates and announcements leading up to the event. If you haven’t ever been, I encourage you to! You can also check out Cindy’s recap of her experience with Alberta Farm Days – she attended a bit more events so it’ll give you a bit better an idea of what to expect!

So, did you go to Alberta Farm Days? What did you like most about it?! If you were at the Urban Farm Dinner, which dishes were your favourite?

Linda Hoang is a Canadian blogger based in Edmonton, Alberta, who writes about travel, food, lifestyle and pet topics. She's also a seasoned social media/digital strategist with a journalism background, the founder of the Edmonton International Cat Festival and co-founder of Stop Race Based Hate, an online anti-racism education tool. Linda loves exploring the world with her partner Mike, eating their way through cities, supporting local businesses, and photographing Instagrammable Walls. Linda is a fur-mom to two cats and two dogs.
PrevPreviousSocial Media Notes (#81) – Links for the Week of August 17 – 23
NextSocial Media Notes (#82) – Links for the Week of August 24 – 30Next