I wasn’t planning on doing a recap of Taste of Edmonton this year. I generally have a good time and few complaints, and the summer festival season is so busy that I tend to miss the opportunity to write it in a timely fashion. This year though, there’s been so much discussion about the event that I did want to put my thoughts out there.

Much of the discussion around the annual summer food festival were responses to Edmonton Sun food columnist Graham Hick’s take on it – which is, that Taste of Edmonton was “awful.” Since the column, I’ve heard from people who completely agree – it’s gone downhill, it’s a fried food mess, this was the worst they’d experience in years. I’ve also heard from people who completely disagree – in fact, it was the best experience they’d had in years! 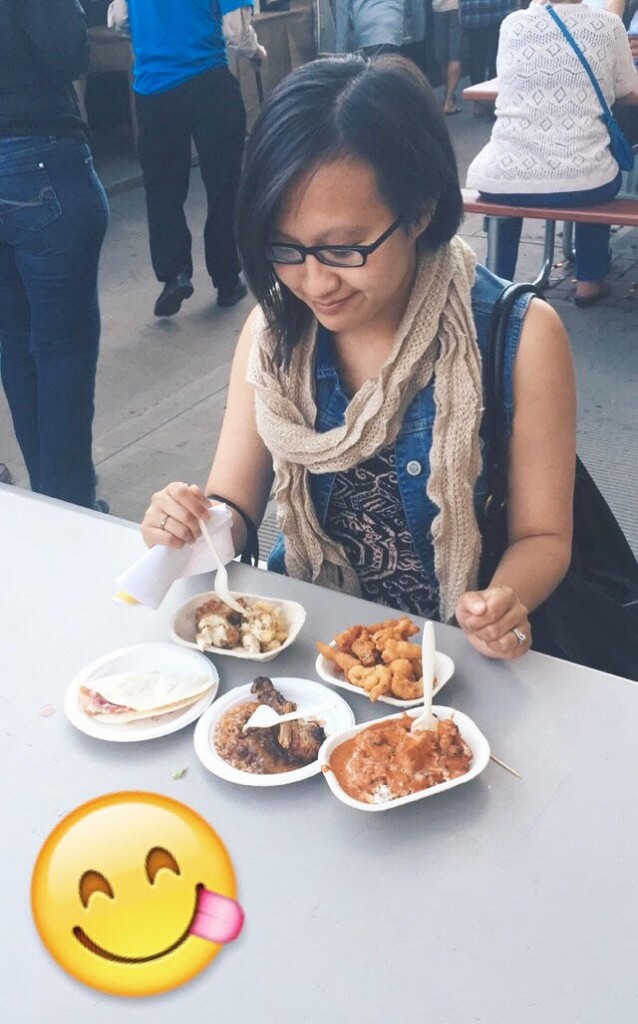 Me in a nut shell! A very happy Taste of Edmonton goer.

I am on the best-experience-I’ve-had-in-years boat.

Really and truly, both times I went to Taste of Edmonton this year (last Friday with Mike and again the following Monday with my mom), I had a fantastic time.

Here are some of the reasons why I thought this year’s Taste of Edmonton was better than it has ever been before:

Although the cost of tickets has increased over the years ($50 for a sheet of 40 this year), we were delighted that so many dishes were being offered at 3 tickets. That was one of the very first things we remarked – we saw a few 4 ticket items, but the majority were 3 tickets. That is exciting and important for us because it meant we could sample a larger variety of dishes and truly – that’s what “Taste of Edmonton” should be about – getting a chance to ‘taste’ a bunch of different dishes. If you’re concerned about value for your money, I honestly think $25 a person (half of the 40 tickets) was fantastic value for the 10 dishes (plus large lemonade) that we got to sample between the two of us. There were 71 dishes that were 3 tickets and 13 dishes that were 2 tickets, compared to just 11 dishes that were 4 tickets! 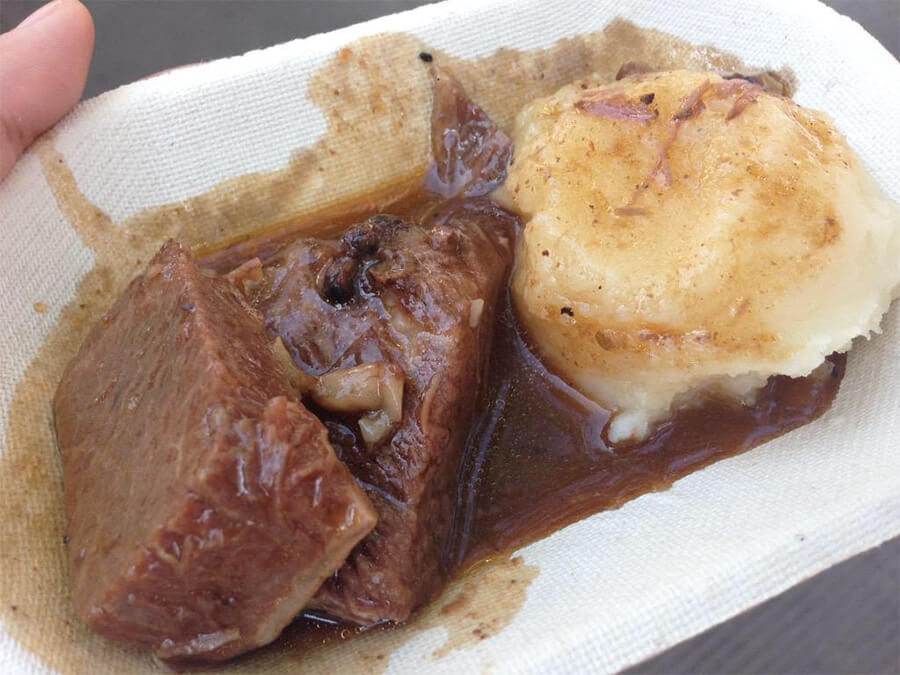 I think when dishes are 4 (or more) tickets, there is this greater expectation that the portion size will be quite substantial and generally that expectation is not met. With most items we found being 3 tickets, we thought the portion sizes were more than reasonable – with some exceeding our expectations and most being right on the money. Something we had heard as a complaint and even complained about ourselves in past years is that with dishes costing too many tickets, or portion sizes being too large, you really don’t get to sample that much – and that goes against the whole idea of having a taste of lots of things! So I thought portion sizes this year were for the most part perfect – with some (like the 3 ticket cauliflower fritto from Parlour) going above and beyond portion expectations, and some (like the 3 ticket single meatball slider from Little Italy Pasta) being a bit disappointing. 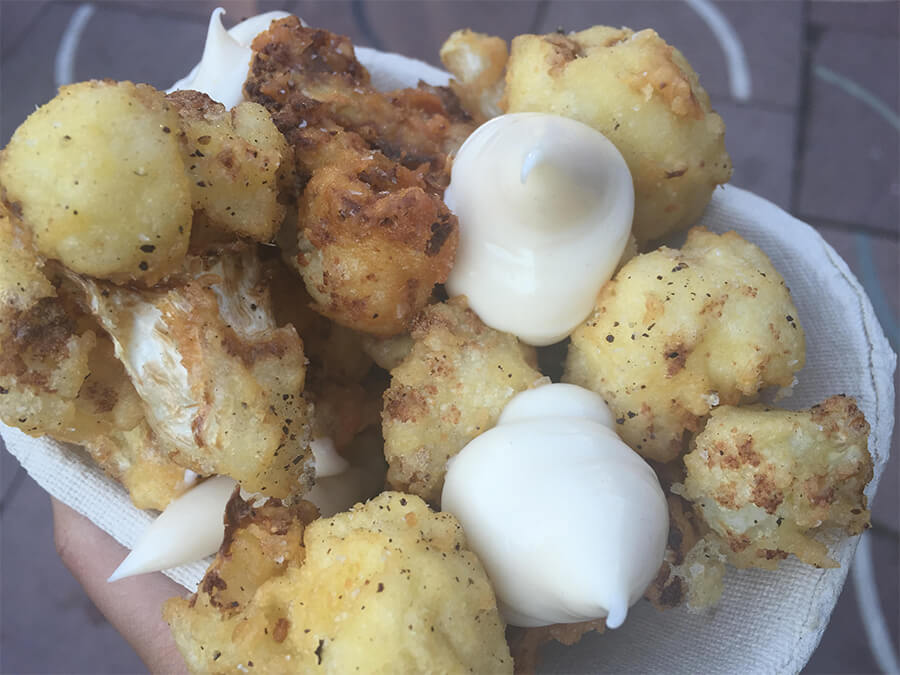 At Taste of Edmonton, there’s not a whole lot of changes from year to year and you’ll find a lot of the same food vendors who have participated in past years – there will always be that element which is maybe boring, but there’s something to be said about consistency and fan favourites. Still, that’s not to say there isn’t new additions being added with each Taste of Edmonton. This year, there were 54 new menu items, 12 new restaurants and food trucks, and they added a bunch of culinary workshops, adventures, and Sip ‘n Savour pop-ups – plus some programming for kids, and main stage entertainment options. I don’t know how many people are taking advantage of the different culinary extras Taste of Edmonton has added (most people do just go to sample the food), but for those who are interested in something more, there is that option! Take some classes, visit a brewery, go on a farm tour. That’s great that I have the option to do that at Taste of Edmonton if I want to. As well, free nightly concerts in the heart of Edmonton’s downtown? What a lovely way to spend a summer day. There’s not a lot of things overly different from years past, but it’s always nice to see something different each year. 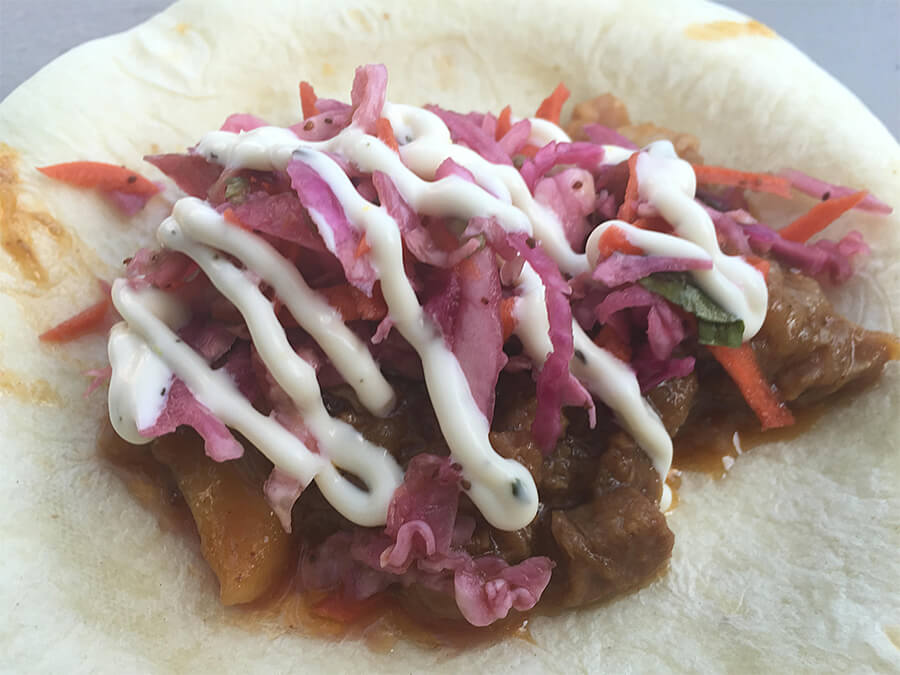 What are your expectations?

One complaint about Taste of Edmonton food offerings is that it’s like K-Days / the midway = greasy, deep-fried things on sticks kind of food. I disagree. Of course, you’ll find your fair share of battered, deep-fried items, and probably it will be difficult for you to find totally wholesome, healthy dishes, but I also don’t go to Taste of Edmonton with the expectation that I’m going to find some fantastic salads and things that are low-calorie that would be suitable for a diet or a cleanse. I just don’t. 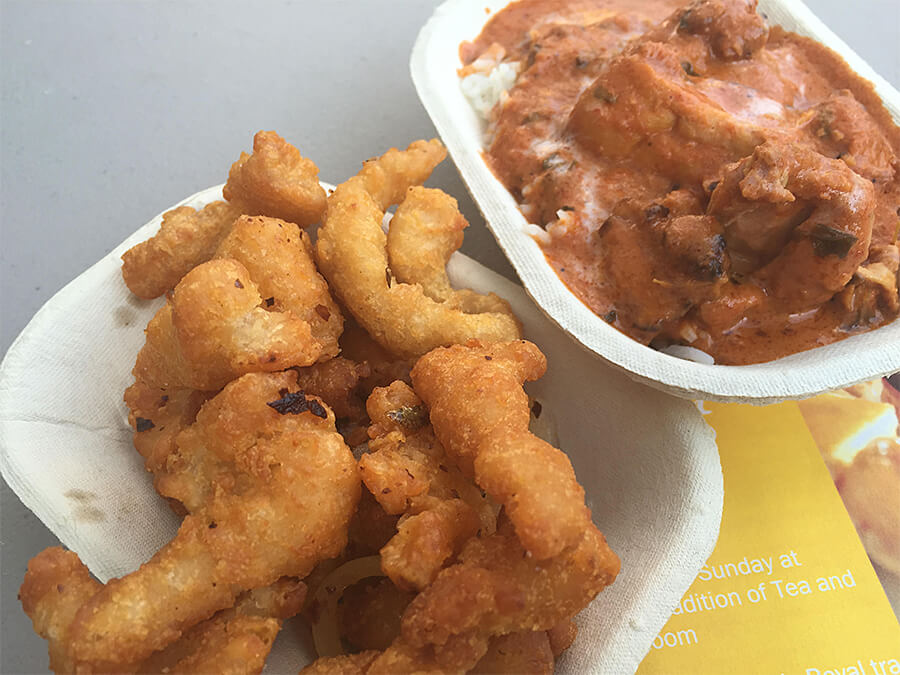 Another complaint I had heard about Taste of Edmonton is that you’d rather spend the $25 (or more) dollars for a nice, sit-down dinner at a restaurant somewhere. Again, what are your expectations for an outdoor summer food festival promising to show you samplings from various restaurants in the city? It’s certainly not my expectation to get a sit-down restaurant dining experience. 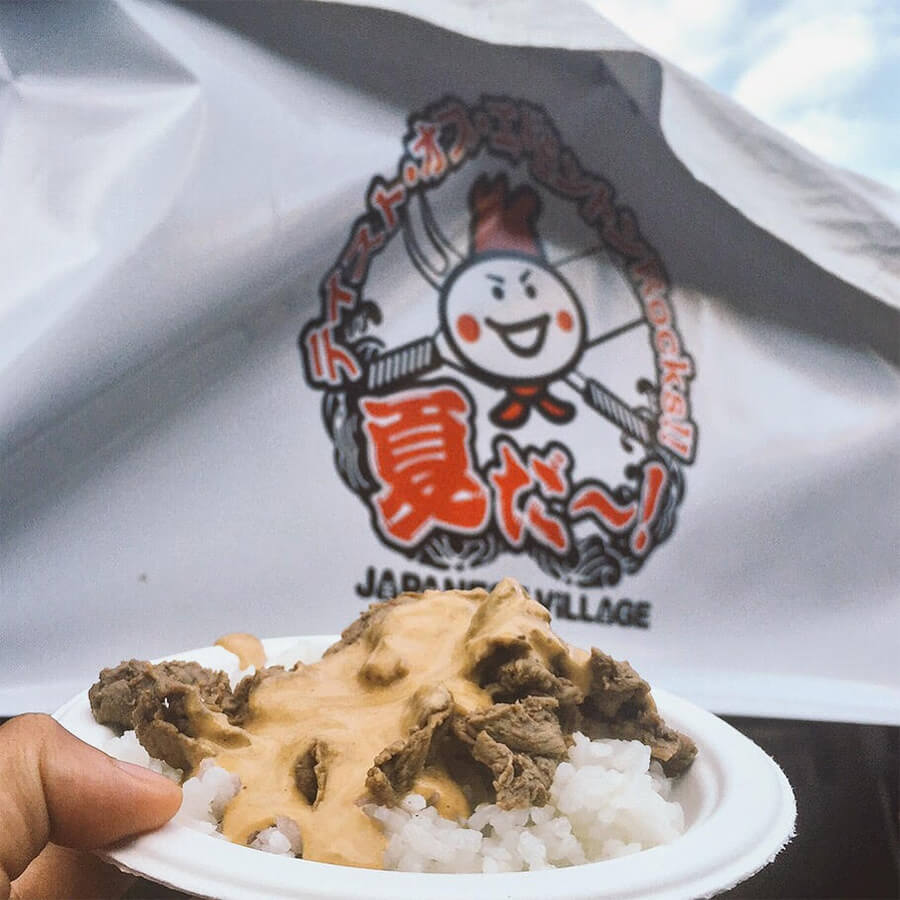 The Sirloin Beef on Rice with Sesame Sauce (4 tickets) at Taste of Edmonton.

Borrowing this line from my friend Diane: “I think it’s unfair to expect people not to trade off some degree of uber high quality for convenience, etc., because these people are cooking in a hot tent and customers want their food instantaneously.” 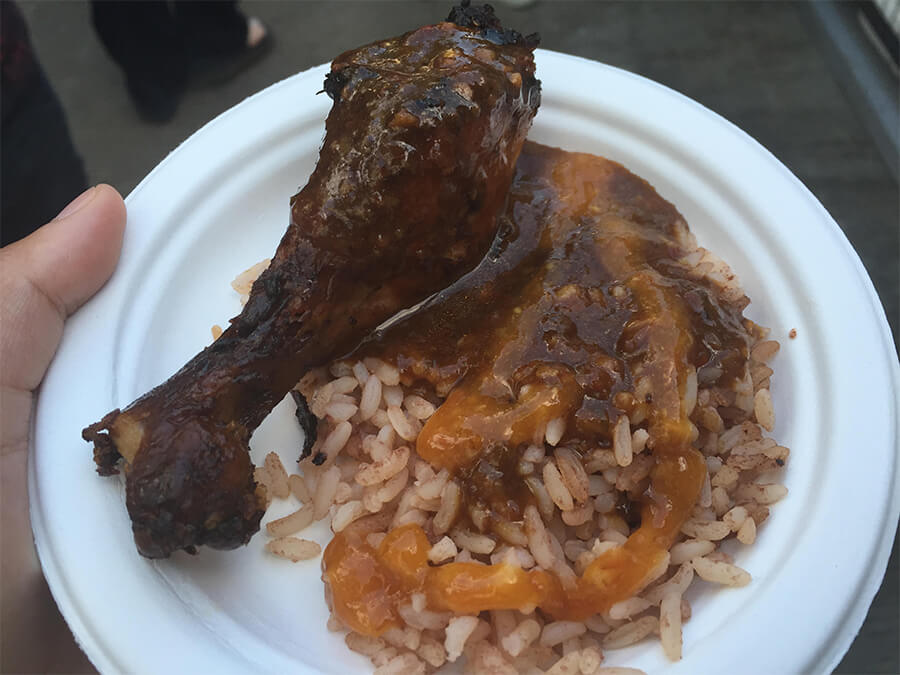 I’m not going to Taste of Edmonton to get the kind of high quality dining cuisine that I would (hopefully) get in a sit-down restaurant. I’m going to Taste of Edmonton to sample a bunch of food in a bustling, festive, outdoor environment, where I can people watch and enjoy a beautiful summer day in Edmonton. It’s a bonus if the food is delicious, but am I expecting each dish to knock my socks off? No. It’ll be good (some will be amazing, some will be just okay), and it’ll show me a little bit of what a restaurant/vendor has to offer. 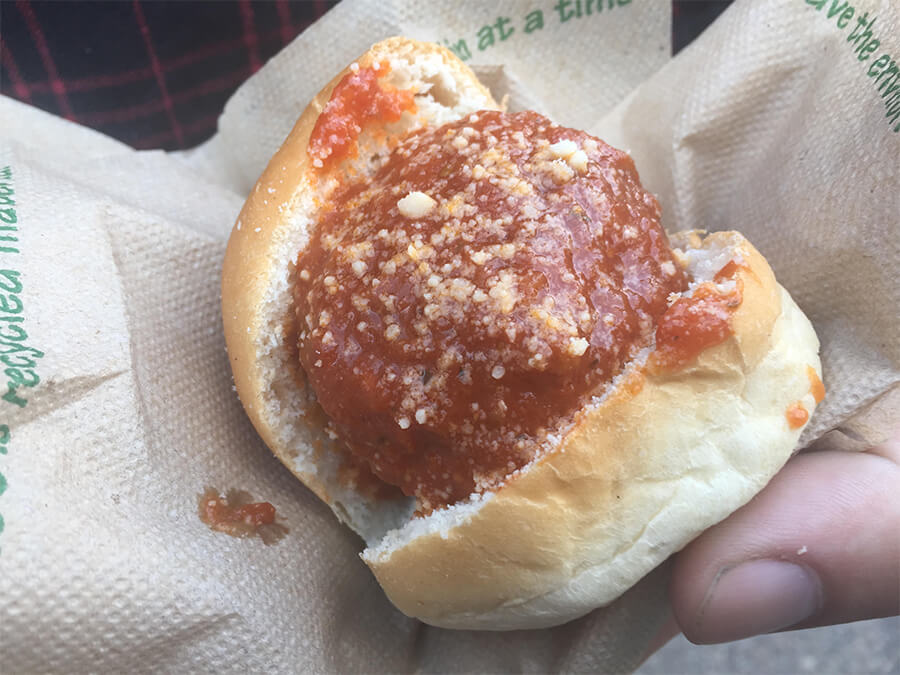 It’s also (and this is why many vendors sign up for Taste of Edmonton) a great way to get some name/logo/face recognition to a restaurant/chef. I think for most food vendors, Taste of Edmonton is not about making a profit – it’s about marketing/exposure, and being involved in Canada’s largest food festival and a long-standing Edmonton summer tradition. 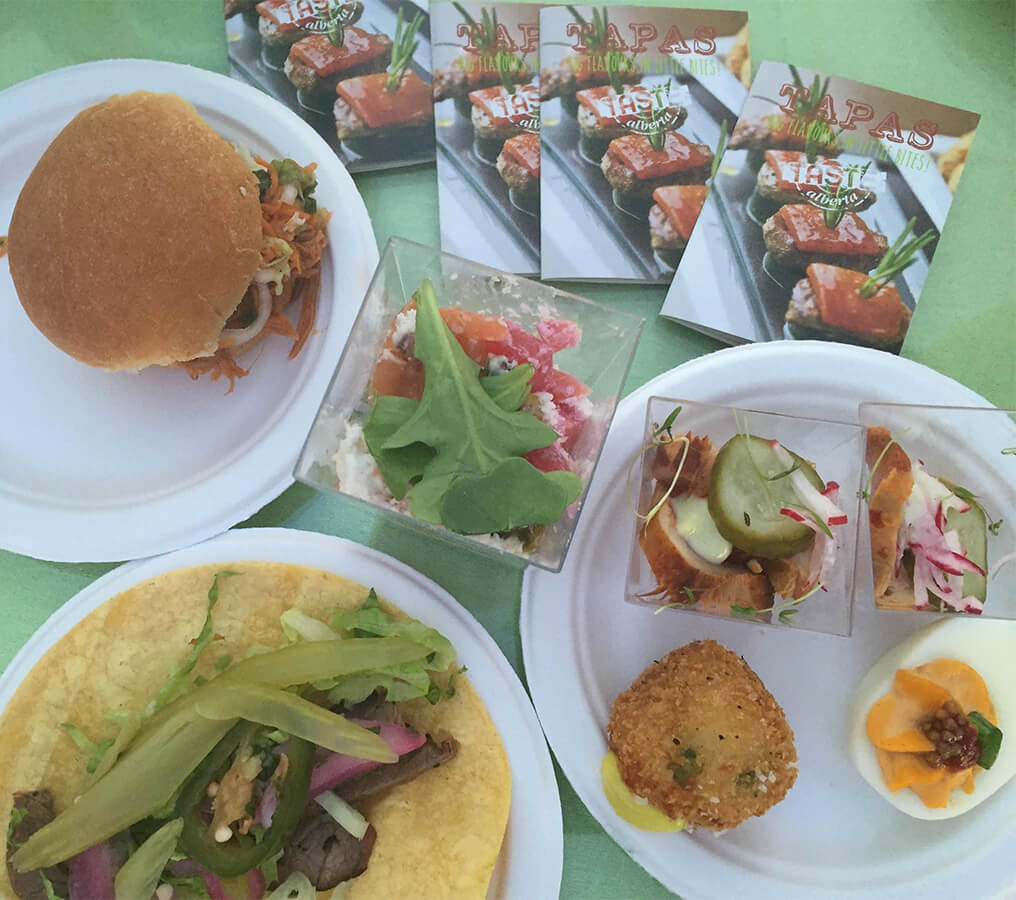 If I found anything disappointing about Taste of Edmonton, it would be the food and questionable value of the Sip ‘n Savour pop-up restaurant. I stopped in the first night as a guest with Taste Alberta (thank you Taste Alberta!) but I didn’t think the food we had in there was great and while Mike enjoyed the drinks, and the patio furniture and view of the stage was nice, if I had paid even the $10 to get in, it wouldn’t have been very satisfying.

Anyone could get into the tent for $10, which would get you patio seating with a good view of the main entertainment stage, one free drink, and a keepsake wine glass. You can get additional food inside the tent with your Taste of Edmonton tickets. Or you could also spring for the $40 ticket option available for groups of 10 or more. This would get you access to the tent, reserved patio seating, three free drinks, the keepsake wine glass, and unlimited access to the food inside the tent). Doing the tent plus regular Taste of Edmonton food offerings would quickly escalate costs.

Still, this year I did appreciate that the tent’s location had been moved to a more central location, and I do like that they’re trying to offer a variety of different food-themed activities (the classes/workshops, culinary tours, even the food fight) to add that extra entertainment element to the festival. 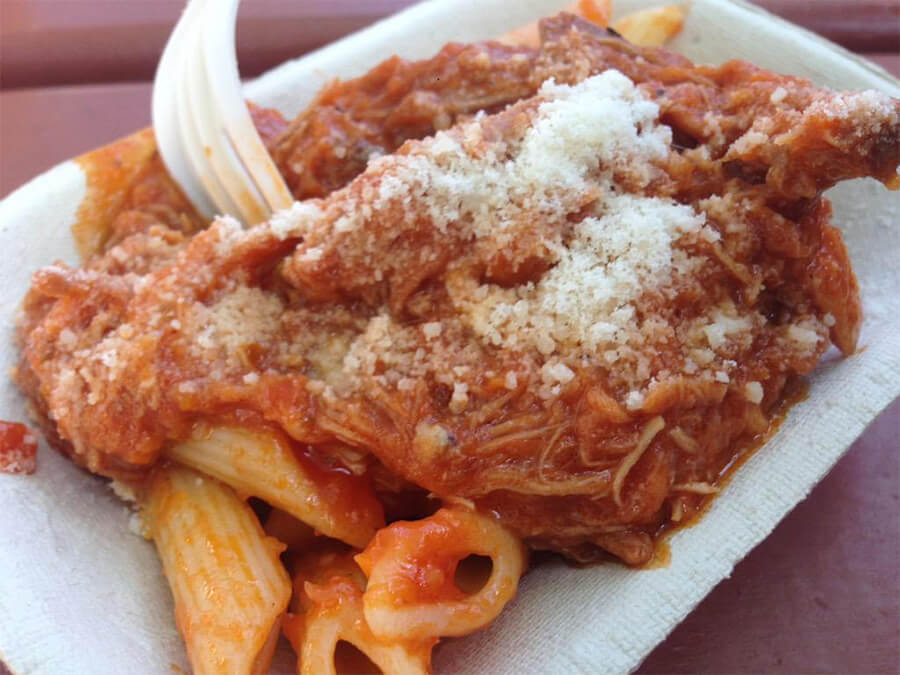 Overall, I had just a lovely time (both trips) to this year’s Taste of Edmonton. My favourite dishes were Normand’s Beef Short Ribs & Mash (just the most tender ribs ever!) and Parlour’s (yes deep fried) Cauliflower Fritto. Mike’s favourite will always be Japanese Village’s steak with sesame sauce and The Lingnan’s Dry Spicy Chicken (4 tickets). 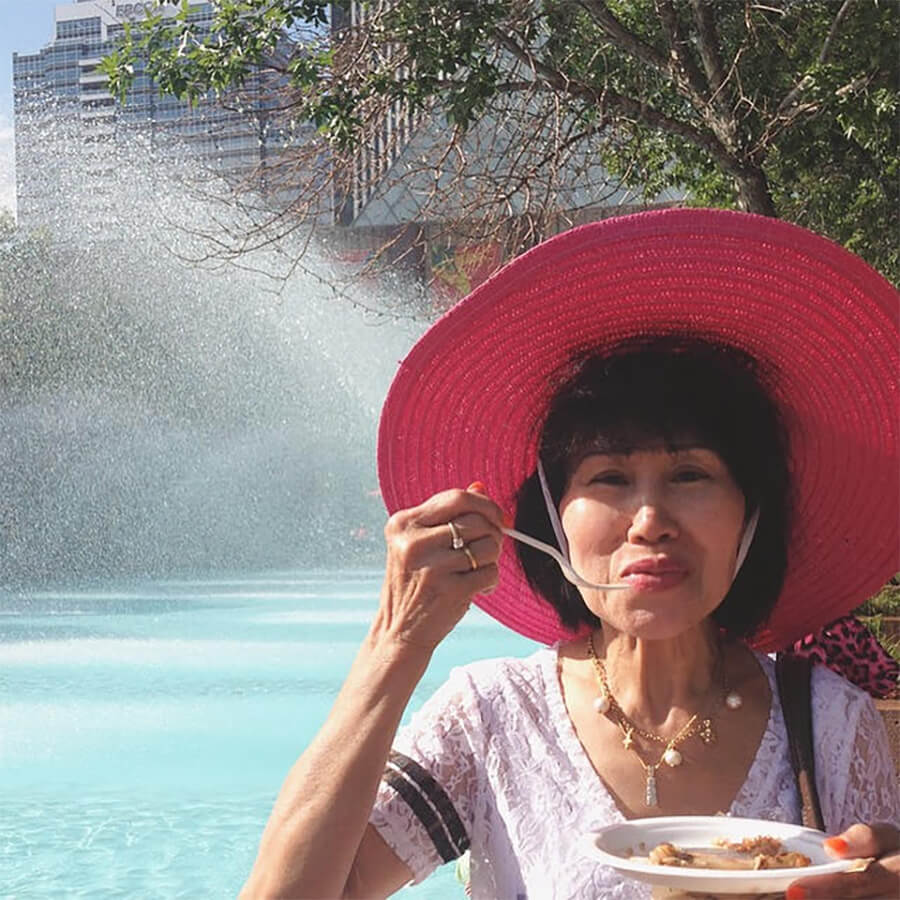 My mom having the best time at Taste of Edmonton.

My mom really enjoyed the Italian Bakery’s Canolli (3 tickets) and the Fairmont Mac’s Berry Compote Scone (3 tickets) (she’s a dessert gal) and I am kicking myself for not getting Zinc’s Banana Bread Pudding (3 tickets) – it was a favourite of mine last year but there were so many things to choose from that I opted to try some other items. 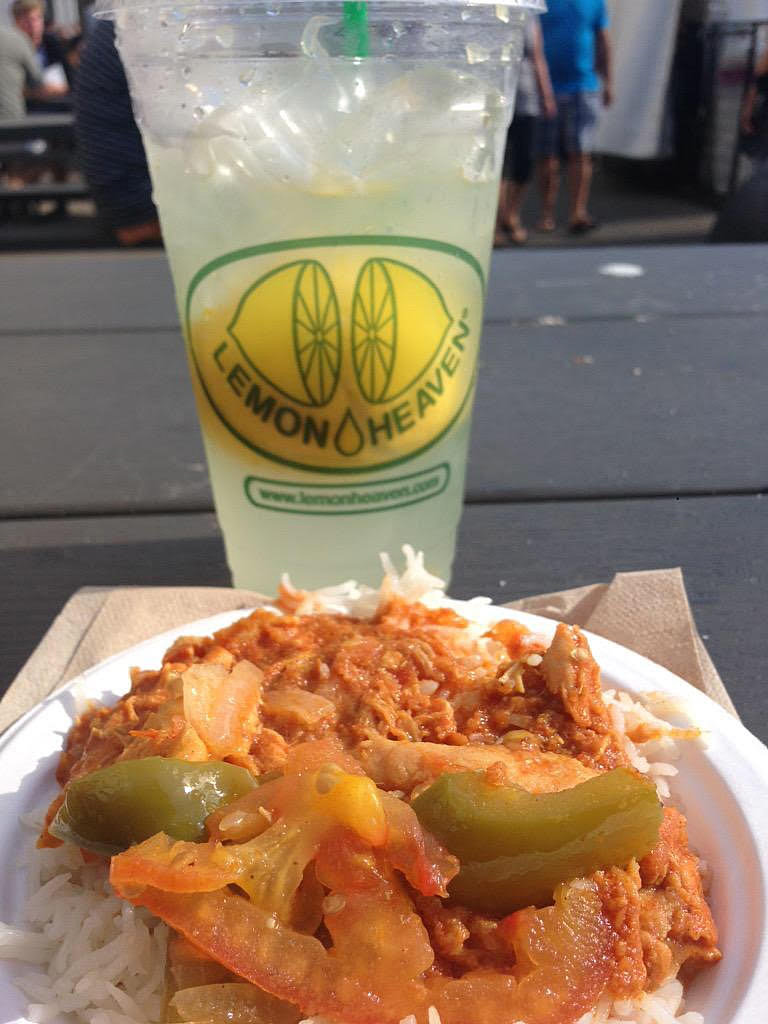 We also thought line-ups were minimal – both times we went. I did stand in line for a bit to get tickets the night I went with my mom, but after that – other than Pampa’s crazy long line-up for their bacon-wrapped chicken, all other tents we stopped at were either 1-2 people in front of us, or the rare 5 maybe 6 people in front of us. (Recommended: purchase your tickets in advance so it’s 20% off to avoid ticket line-ups and get even more bang for your buck). I also found there was lots of space/tables to sit down!

BONUS: On the Friday night, we saw Aerosmith’s Steven Tyler! He was in town before heading to Fort McMurray for a concert – and looked like he was having a blast at the event. I think he did several loops around and Mike ran into him in the bathroom! lol!

And you know what? I left extremely satisfied on all fronts!

I certainly also don’t mean for this post as any kind of attack on Graham or his opinions – everyone is entitled to their opinions (and it’s his job to publish his). Actually, although I completely disagree with his on Taste of Edmonton, I think it was great to start a discussion on what makes the festival great (or not so great).

Check out Sharon’s recap of her Taste of Edmonton experience. You can also read what CBC Edmonton / Twyla thought of it. Please let me know what you thought of this year’s event in the comments below (or social media :)) As a side note: I am SO looking forward to Heritage Festival this year!

Sign me up for all of the summer food festivals, please!

Linda Hoang is a Canadian blogger based in Edmonton, Alberta, who writes about travel, food, lifestyle and pet topics. She's also a seasoned social media/digital strategist with a journalism background, the founder of the Edmonton International Cat Festival and co-founder of Stop Race Based Hate, an online anti-racism education tool. Linda loves exploring the world with her partner Mike, eating their way through cities, supporting local businesses, and photographing Instagrammable Walls. Linda is a fur-mom to two cats and two dogs.
PrevPreviousRecap: The 124 Grand Market & Taste Alberta’s #GrandTasteTour
NextSocial Media Notes (#77) – Links for the Week of July 20 – 26Next