Poke has made its way to the Prairies! Edmontonians can now treat themselves to the popular, traditional Hawaiian dish at a few different spots in town, including the focus of this post: Ono Poke Co. located on 104 Street and 101 Avenue.

Poke – pronounced ‘po-kay‘ – is a raw fish salad traditionally made with cubed ahi tuna, shoyu (soy sauce), sesame oil and green onions. It can be eaten as a snack or often as a main dish over rice. Today, poke bowls can feature a bunch of different proteins and a bunch of different sauces and seasonings (usually with a Japanese/Asian flair).

Ono’s Executive Chef Lawrence Hui, a NAIT Culinary Arts graduate, made a point to immerse himself in Hawaiian cuisine and culture before opening Ono Poke Co. to provide a truly authentic experience to Edmontonians. He ate and learned about traditional poke from some of the top chefs in Maui (Ka’anapli Beach) and brought those learnings back to Edmonton with this new fast-casual poke restaurant on the 4th Street Promenade downtown. 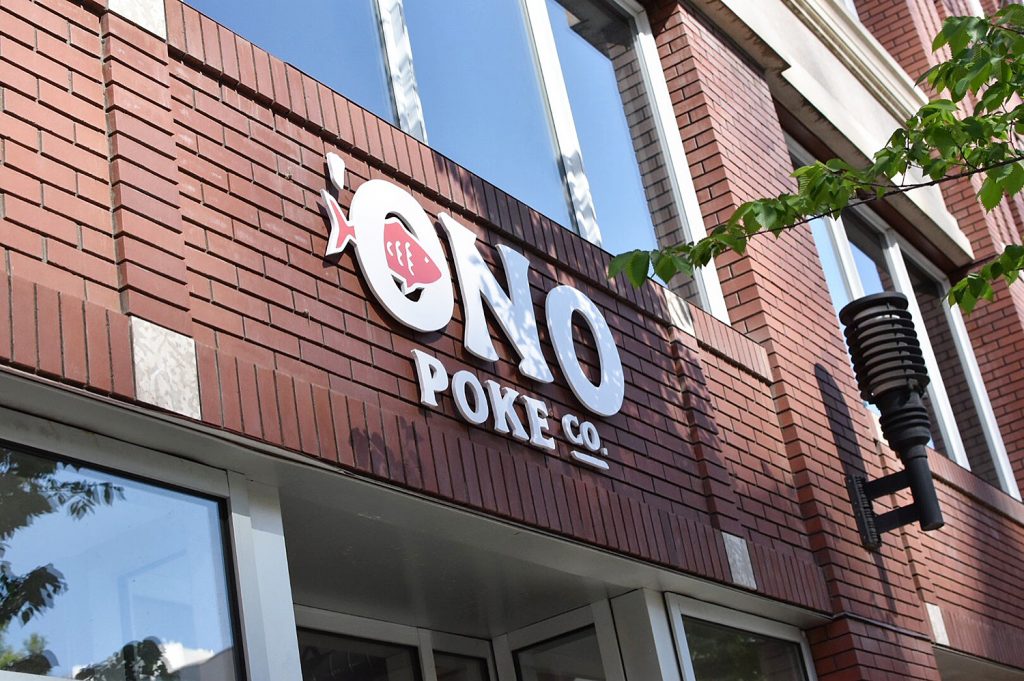 I was invited to a sneak peek of the new restaurant before its grand opening in early June, but have also been for lunch since then. Ono Poke Co.’s menu features six signature, chef-driven dishes with proteins including Ahi tuna, Albacore tuna, Atlantic salmon, a Vegetarian and Gluten-free option featuring beets, and a spicy braised pulled pork.

There are also two daily specials (different proteins) you can choose from as well, which are inspired by the creativity and innovation at some of Ka’anapali’s newest eateries. For example, Chef Ikaika Manaku of the Westin Nanea created a scallop and octopus poke for Chef Lawrence during his trip – something we can expect to see his take on as an upcoming daily special. 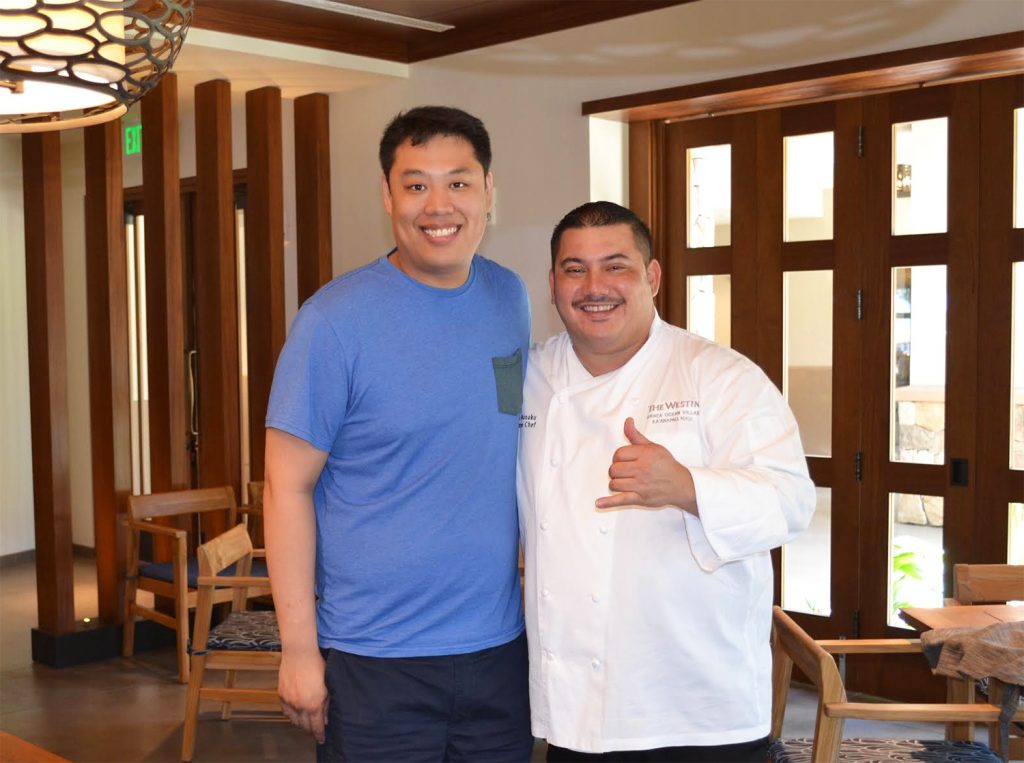 Chef Lawrence getting inspiration with Island chefs including Ikaika Manku of the Westin Nanea. (Photo Supplied)

Since they’ve opened, some of the specials have included Hawaiian Swordfish, Sea bream, Moonshell Surf Clam, and Tarahiki – pretty unique fish options that you might not easily find elsewhere in the city.

Each protein is hand-cut and marinated fresh daily and each bowl promises bright, bold flavours and unique textures.

In addition to our six feature bowls, our chef whipped up something special for you today, #yeg ? pic.twitter.com/ki4ZdV5CJe

Ono Poke Co. does not offer ‘Build Your Own’ poke on purpose – instead, putting a big emphasis on chef-driven creations by Chef Lawrence, inspired by his experience on the Islands. 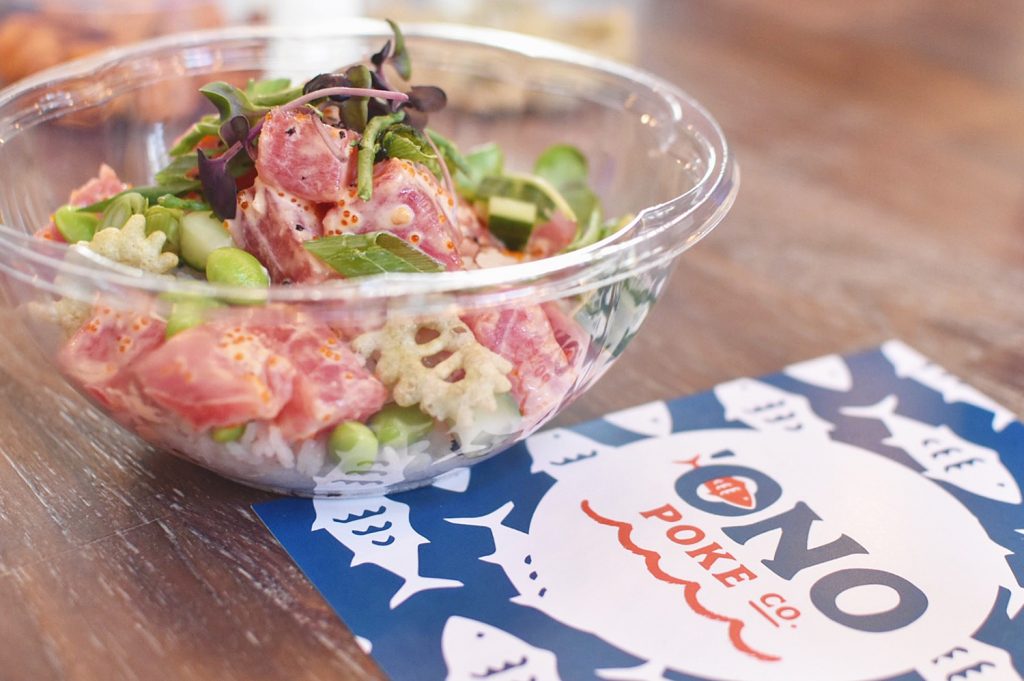 Of the four dishes I’ve already tried at Ono, I think Uncle Tom’s Surf Poke is my favourite. This dish features Ahi tuna, spicy tobiko aioli, white onion, cucumber, edamame beans, green onion, micro greens, sea asparagus, and wasabi crab chips over my preferred base of white rice (you could also choose quinoa or mixed greens as your base).

I love the pop of texture and flavour the tobiko brings to this dish, and sign me up for all of the wasabi crab chips please – great crunch, and mixes well with the well-portioned, flavourful cuts of tuna. This dish is named after Chef Tom Muromoto of Ka’anpali Beach Hotel, one of the chefs who taught Chef Lawrence about Hawaiian cuisine and poke (and also someone he went surfing with! So fun). 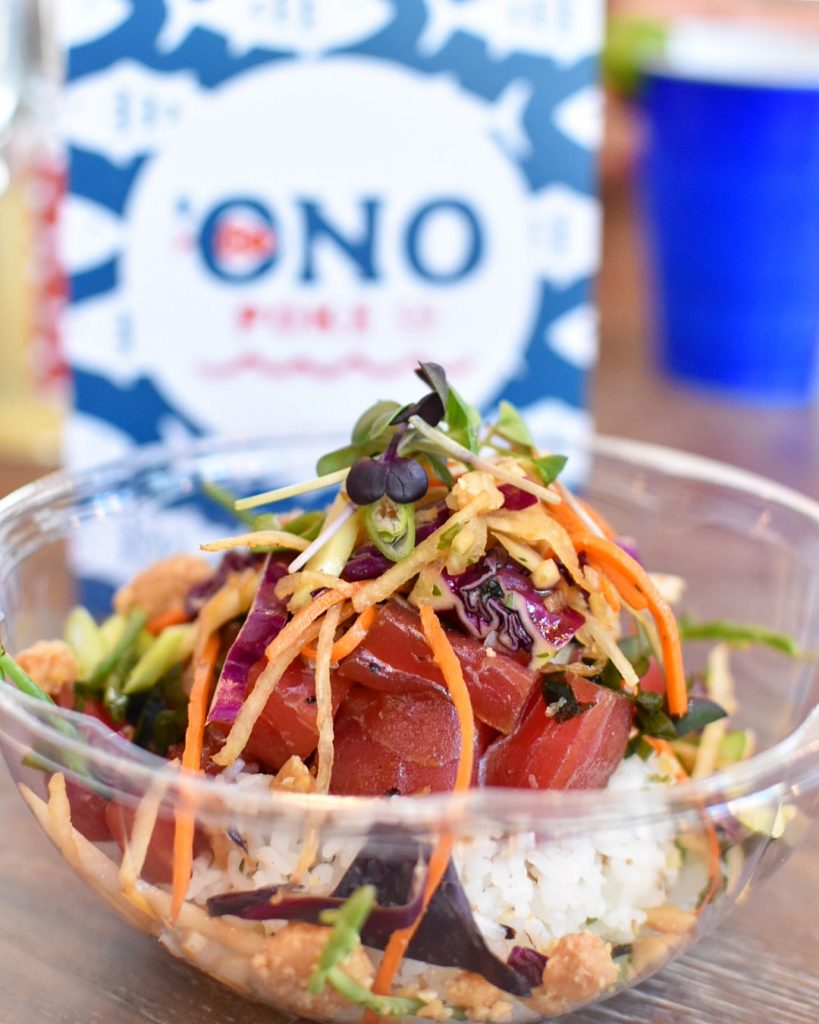 This ‘original’ bowl makes me think of something my friend’s husband does when he sees burgers on the menu at restaurants. He always orders the ‘original’ or most simple/straight-to-the-point form of the burger, because he says, if they can’t do their original right, how can do their funkier variations? I find the same to be true in this case, when your original Ono Poke bowl is delicious – which in this case, it is – then you know that’s a good sign for all the other signature dishes. 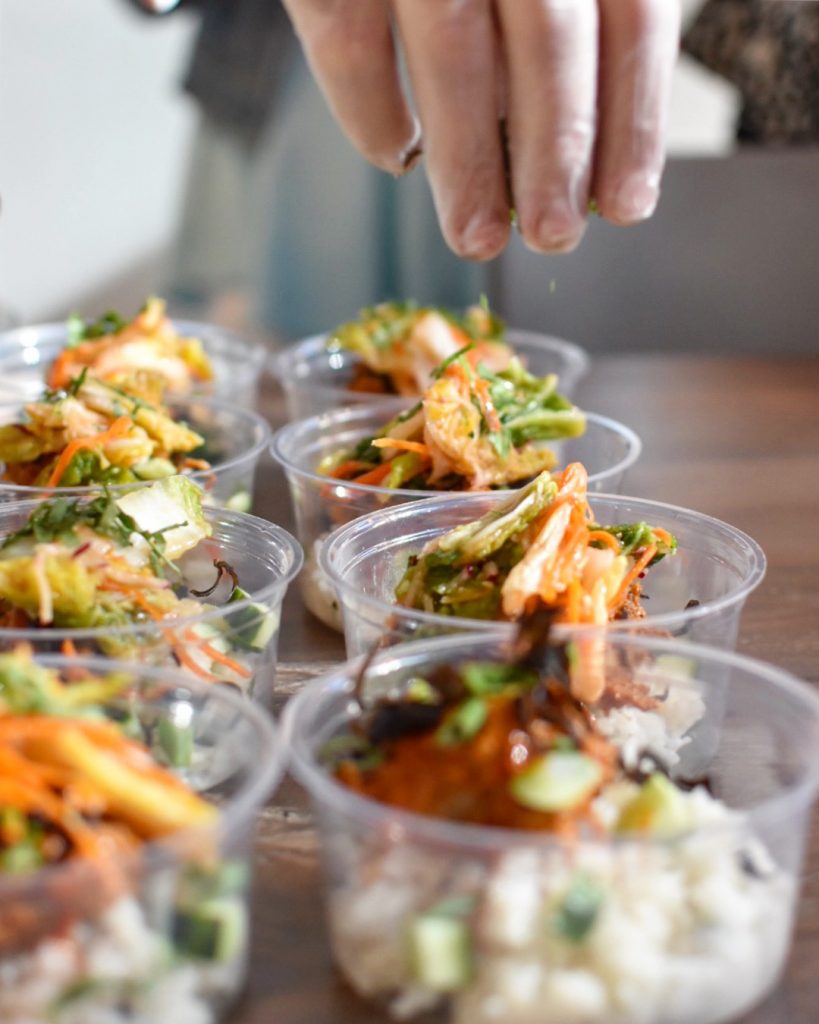 Chef prepping sample bowls of the Prairie Luau at a sneak peek event.

The Prairie Luau is an interesting take on poke – with a lot of Korean flavours. There’s Gochujang marinated braised pork, gochujang vinaigrette, Chinese black fungus mushroom, cucumber, white onion, green onion, house-made kimchi, chili oil and cilantro, so it’ll hit you with a bit more spice than some of the other bowls.

It provides a nice alternative to just raw fish if you still wanted to visit with a friend who might not be as interested in sashimi (their loss, lol). The Prairie Luau wasn’t my favourite and wouldn’t be my first pick when it comes to poke (I’m a raw fish poke purist!) but was still bright, flavourful, with featured a lot of great textures with every bite, much like its sashimi counterparts. 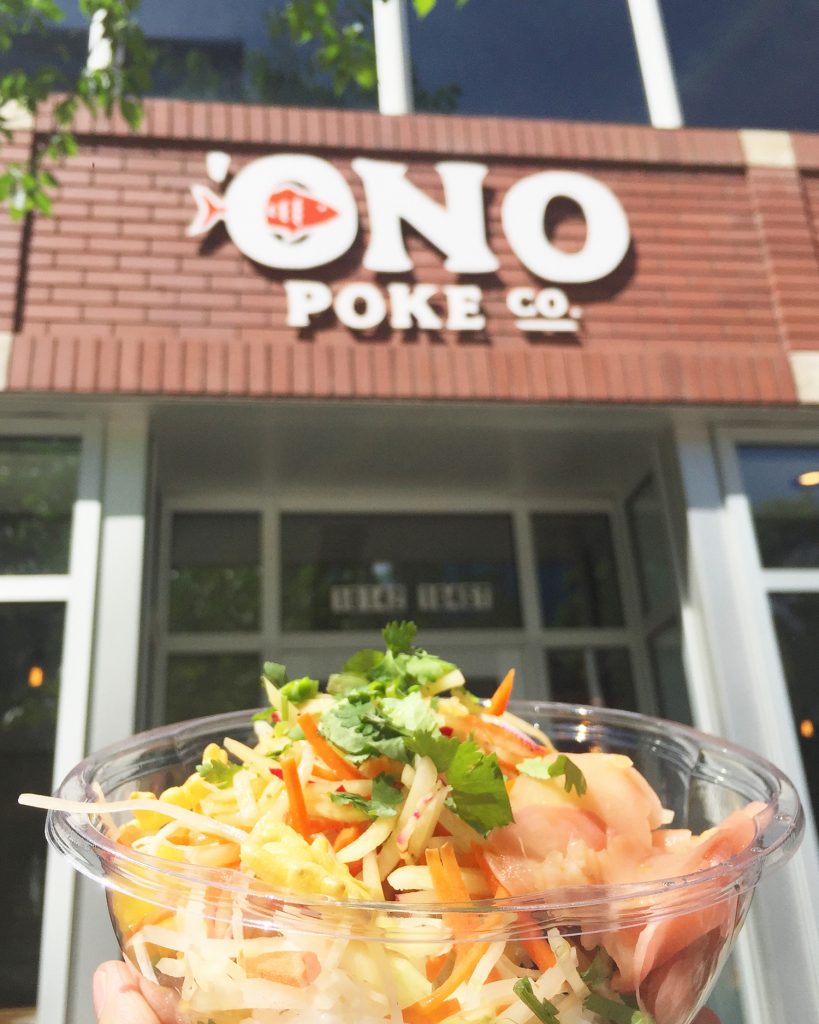 Light and bright (sensing a trend here with Ono’s bowls ;)), this dish has a ton of texture. The homemade pineapple mango salsa is super refreshing, along with the citrus ponzu. You get a great bite with the vegetable slaw, and find that lovely crunch of crab chip (this time spicy) in this bowl as well. I’d still say Uncle Tom’s and the Ono are my favourites of the four I’ve tried, but Twitch in Tuna would stack up shortly after those two. 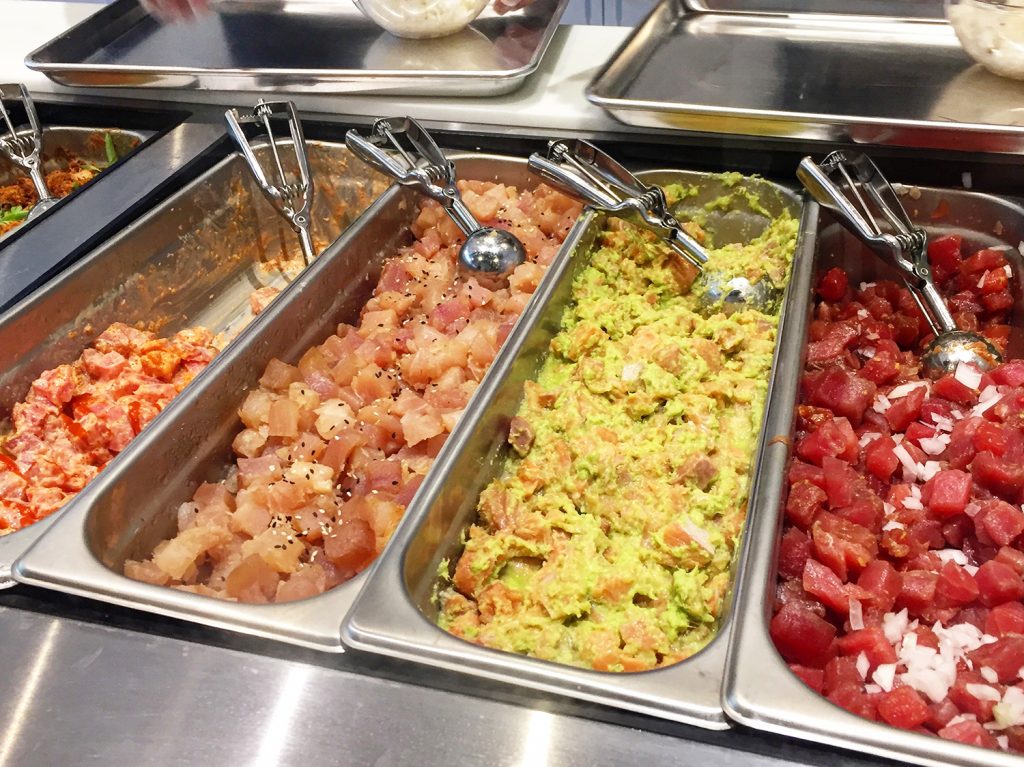 There’s also “The G.G.” an Atlantic salmon poke, and a “Beet the Poke” which uses gold and red beets in place of fish or meat and is the vegetarian/gluten-free option, however Chef was able to make Sharman (who is celiac) an Original Ono Poke bowl with non-marinated fish (the marinade is where the gluten comes into play), which she really appreciated. 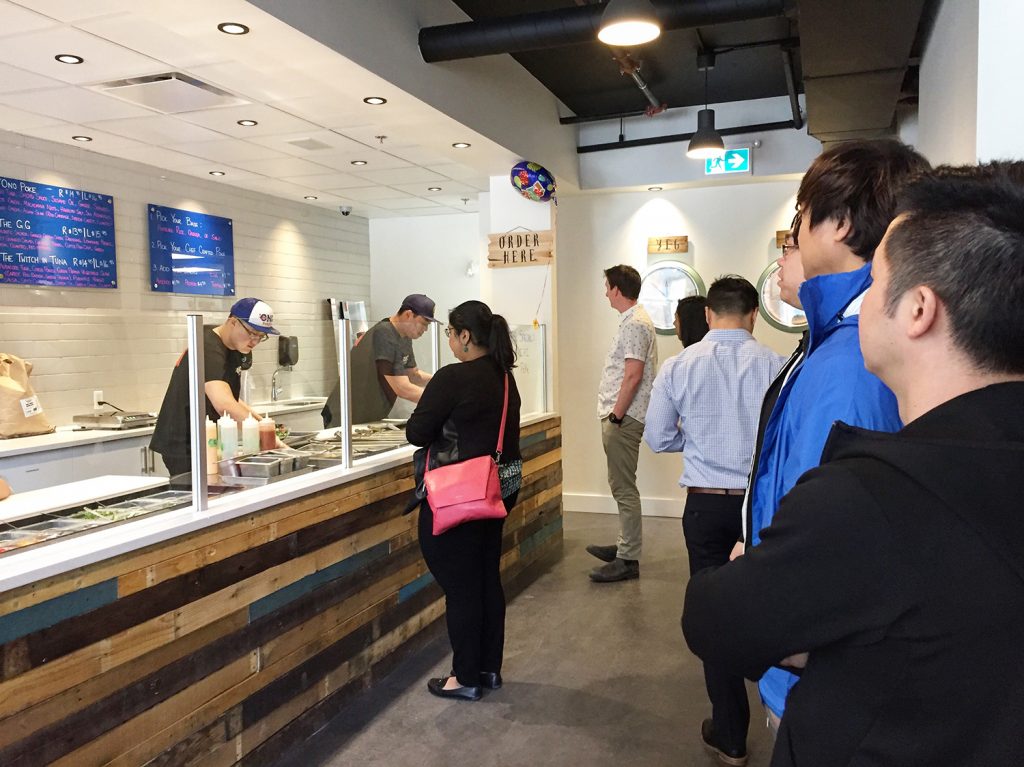 When we went for lunch, there was quite a line-up forming just before noon but I was pretty pleased with how quickly the line moved (even with Chef Lawrence going out of his way to get Sharman a gluten-free Original bowl).

It was also their first day of weekday lunch service when we went, making the smoothness of the line-up even more impressive (too often you hear of first lunches or first dinner services being such a mess as the team tries to handle crowds while figuring out their own processes. Not the case at Ono). 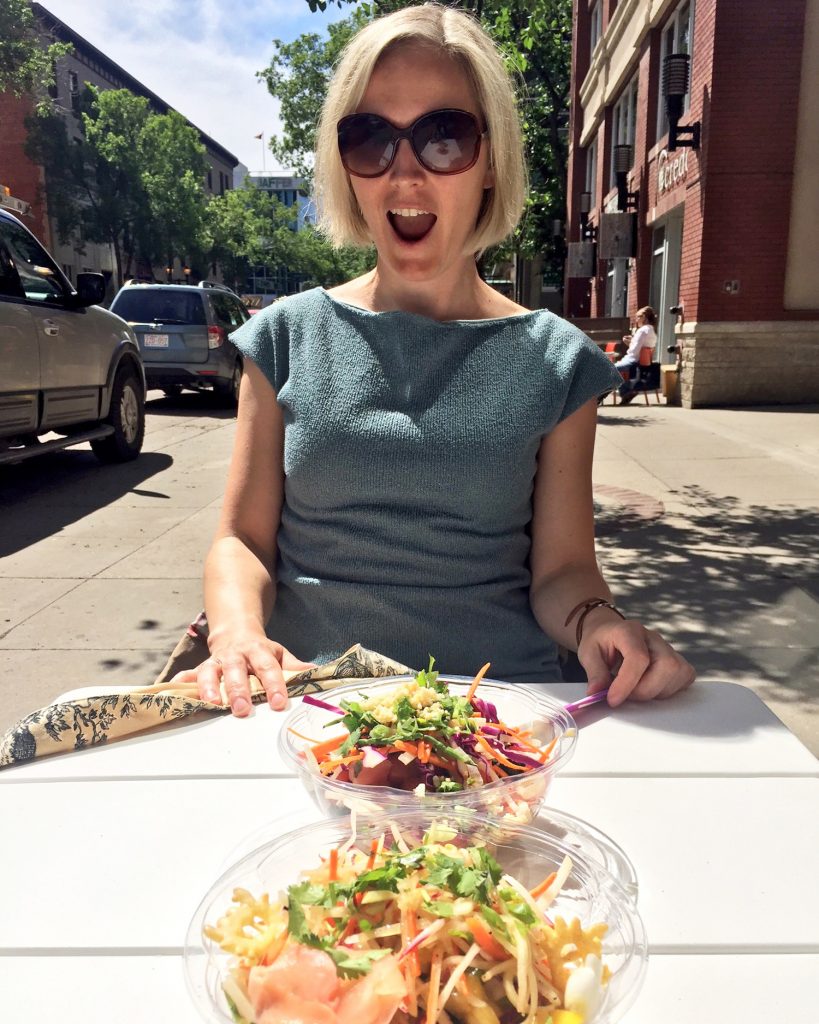 Ono has lots of seating inside, but also opened with patio space too! How can you go wrong on a patio poke date? It’s especially perfect for Saturday City Market strolls and people watching, amirite?

They’re planning on featuring a Hawaiian shaved ice desserts soon too, which should be perfect for the summer! There’s a counter set up for it inside the restaurant but they’re not quite ready to roll it out yet (keep checking back). 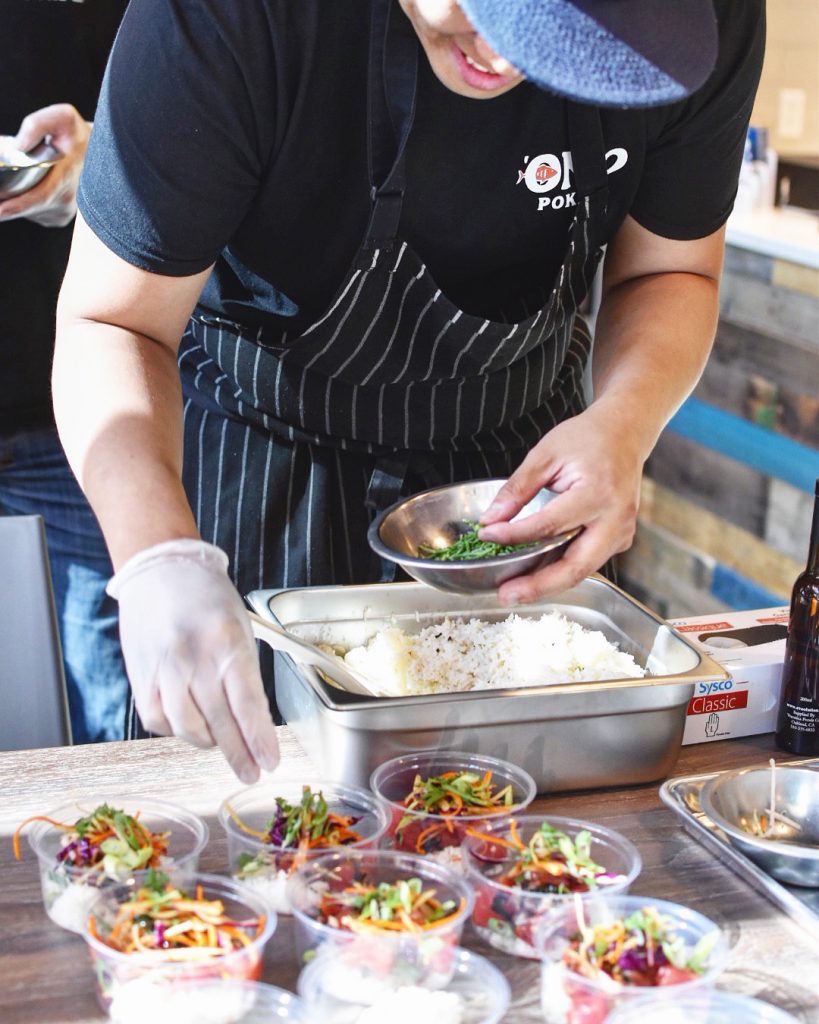 As I mentioned earlier, it really does feel like poke has hit the prairies. It’s like how ramen took years to reach our city and then ramen joints were popping up left and right. It’s also kind of like how escape games really exploded in that 1-2 year period and have quieted down a bit now, lol. The newest trend to (thankfully) arrive in Alberta – poke. You’ll find a form of poke offered at a lot of bigger chain restaurants now. There’s also poke in the food court (at the Sushi Shop in Kinsgway) and on 109 Street at Splash Poke.

I’ve tried poke at the food court (satisfies the craving, but nothing to rave about. Also, really tiny fish cuts). I’ve also tried Splash Poke (which offers a Build Your Own Bowl feature that I thought was pretty good, with customization you won’t find a time Ono,  though I had a bad ordering experience, and also felt like the portions here were smaller overall). Ono is my favourite local  poke offering to date – with really generous cuts of fish and wonderful flavours and presentation. Also likely the closest to poke you might find in Hawaii, given the chef’s commitment to bringing as authentic of a poke experience as possible to the Prairies (though I haven’t actually had poke in Hawaii yet). 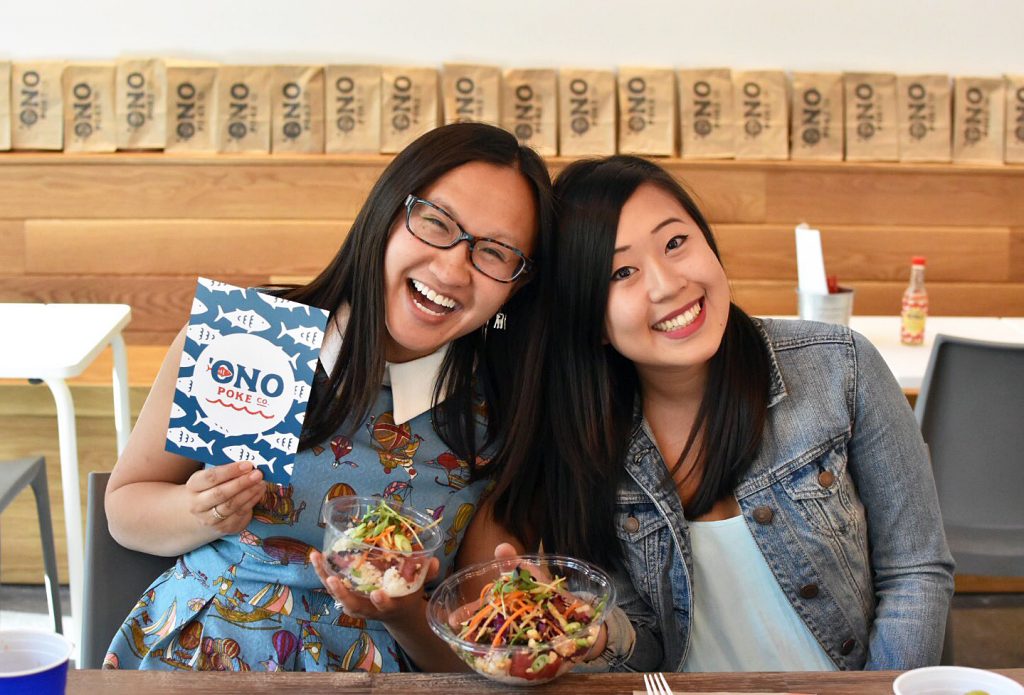 O yes – poke-ing it up with Little Miss Andrea at Ono Poke Co.

One story Chef shared during the sneak peek event I attended that I loved – is how in Hawaii – poke can be found at all major grocery stores on the island and even in liquor stores. There was one liquor store called Tamura’s Fine Wine and Spirits, with a poke counter at the back of the store featuring 30 varieties of fresh poke each day. Something the locals will do is pick up some beer and poke for an after-work snack. How cool is that?

You could do the same at Ono – they offer marinated poke (just the fish – nothing else) in take-out containers you can purchase, along with some other sides like kimchi, Shoyu japchae, baked taro chips, and Hawaiian chili water – which is a popular Hawaiian condiment you can pour over your poke. Roll on by after work and head home with some poke!

Ono Poke’s bowls are offered in a regular or large size. Regular is about 6-8 oz. and ranges from $11.95-$14.95 depending on the dish you select. The large is almost double the regular, at 14 oz., and ranges $13.95 to $16.95. I’d say the average price of your poke bowl at Ono is likely coming in around the $15 mark which may feel a bit pricy – though remember, high quality, sustainable fish is generally going to cost you more (no matter where you are).

If it helps for comparison, the food court poke I tried was basically the same price – and Ono’s is (understandably) a jillion times better. So it’s not like their price points are unusual for poke. I think the cuts of fish per bowl are generous, but I still find myself feeling a bit hungry. I haven’t heard the same about this from some others I’ve asked about Ono – regular works for them. This may be because I’m a major piggy, who eats a lot, lol. But I’m planning on returning very soon to try their Large size to see if 14 oz. is more of my standard size. 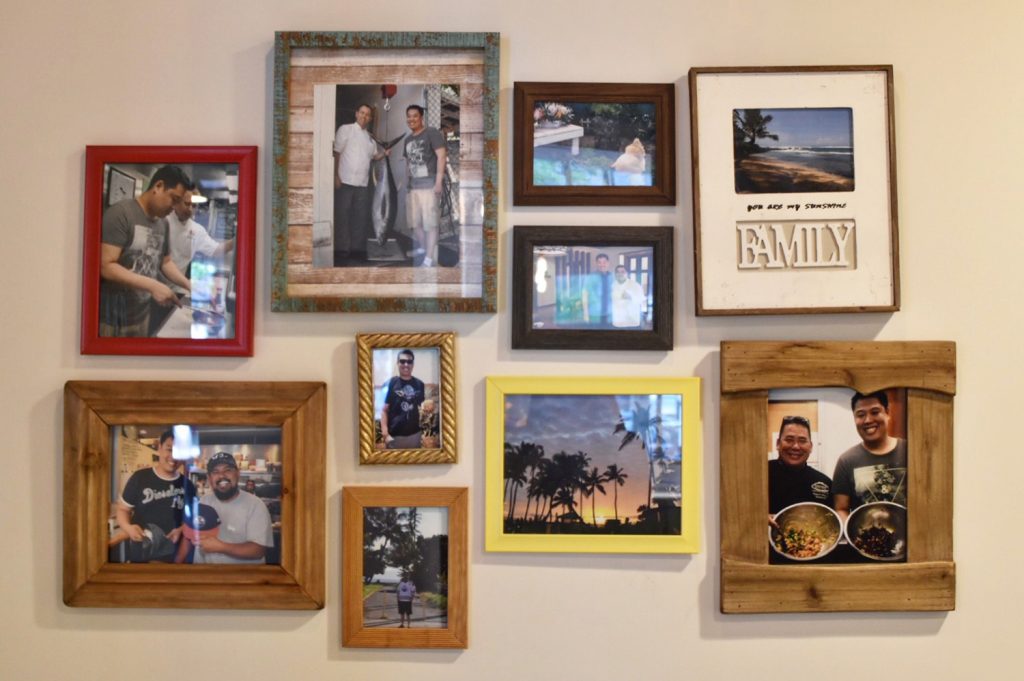 The Hawaiian chefs who hosted Chef Lawrence basically welcomed him (and therefore Ono, and therefore, Edmonton) into their families. As anyone who has watched Lilo & Stitch will know (lol), Ohana means family, and you certainly get that feeling when you’re inside Ono Poke Co., that you’re like family.

“Visit us once and become Ohana – Hawaiian for family. Everyone is welcome to our table, it’s the Aloha Spirit.” 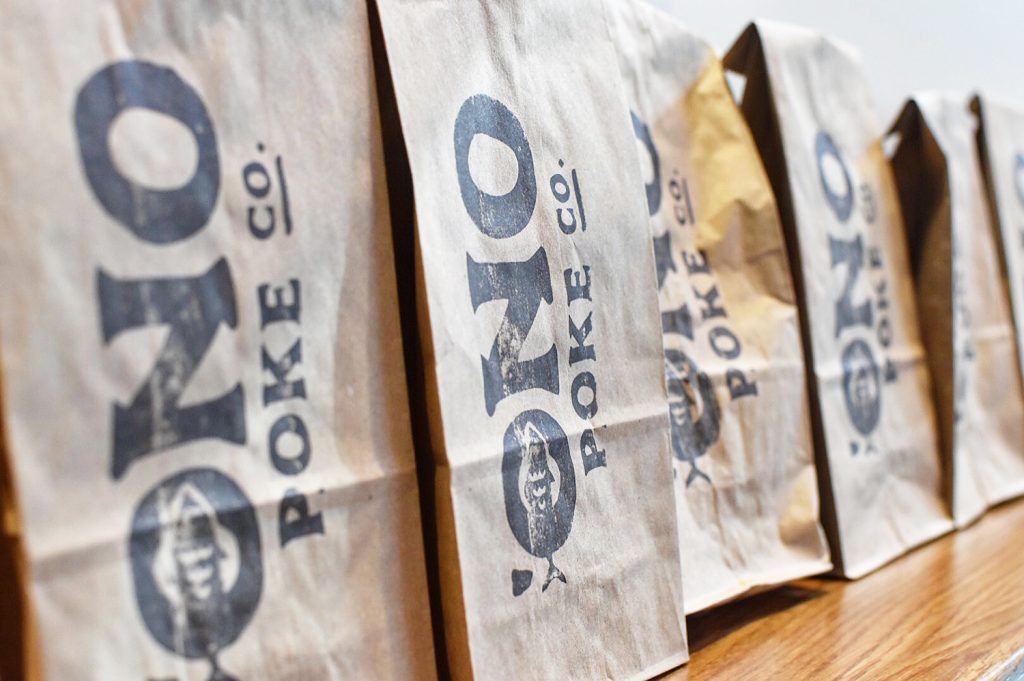 I’m looking forward to trying all of the different, delicious (Oh So Ono!) fresh seafood, housemade marinades and sauces, and locally-sourced vegetables and exotic Asian garnishes at Ono Poke Co. Congratulations to Chef Lawrence and the team on their opening, and welcome to the Prairies, poke!

So have you been to Ono? What did you think?!

Disclaimer: I will always provide my 100% honest opinion on this blog. I was invited to a sneak peek event for Ono Poke Co. ahead of its grand opening. This does impact opinions stated in this post. I have also tried Ono outside of the sneak peek event.

Linda Hoang is a Canadian blogger based in Edmonton, Alberta, who writes about travel, food lifestyle and pet topics. She's also a seasoned social media/digital strategist with a journalism background. Linda loves exploring the world with her husband Mike, eating their way through cities, supporting local businesses, and photographing Instagrammable Walls. She is the founder of the Edmonton International Cat Festival and a fur-mom to two cats and two dogs.
PrevPreviousGuide to Instagrammable Walls of Edmonton
NextCheap Eats: Tapas Tuesday at Zinc Art Gallery of AlbertaNext