I haven’t been posting everything that I’ve put up on the web for CTV but I wanted to make sure I put this article from Friday up because it’s the first online-only type of article that I’ve done for CTV! 99% of my web reporting duties are re-writing stories that are done by the TV reporters or pulling information/etc. from whatever sources they gather. For this TEDxEdmonton story, I was the sole reporter, conducted the interviews, got the information on my own, etc. With the help of Stewart, a web producer here, we put the article together into a different-looking story page than what you’d see with the usual online news articles, we made it more of an online feature, and I’m very happy with how it turned out! 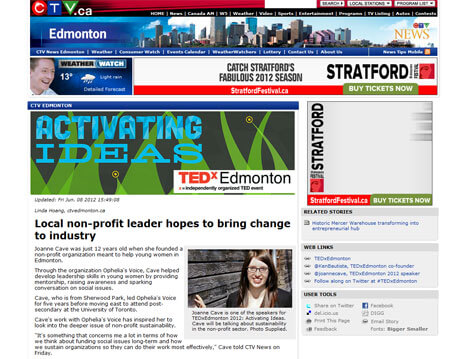 I do hope to be able to do more online-only, my-own-reporting work for the CTV website but that proves difficult because obviously there are news-of-the-day stories that need to be posted first so having specific time devoted to these kinds of things is hard when you don’t have a big web staff to begin with. So I imagine these kinds of stories will be few and far between (for now) but at least I got to dabble with it! Anyway, read below!

Published online at CTVEdmonton.ca on June 8, 2012.

Joanne Cave was just 12 years old when she founded a non-profit organization meant to help young women in Edmonton.

Cave, who is from Sherwood Park, led Ophelia’s Voice for five years before moving east to attend post-secondary at the University of Toronto.

Cave’s work with Ophelia’s Voice has inspired her to look into the deeper issue of non-profit sustainability.

“It’s something that concerns me a lot in terms of how we think about funding social issues long-term and how we sustain organizations so they can do their work most effectively,” Cave told CTV News on Friday.

“In every sector there is a role to play in re-thinking how we think about social issues and I would argue that it’s an idea that truly touches everyone. It’s not specific to any one audience.”

It’s that idea that Cave is bringing to Edmontonians at the third annual TEDxEdmonton conference set to take place Saturday at the Citadel Theatre.

It began in California 25 years ago and centred around “technology, entertainment, and design” but has since grown beyond those topics and spread worldwide through a number of independently-organized events, including TEDxEdmonton.

At the age of 20, Cave will be the youngest speaker at Saturday’s conference.

She hopes her conversation will motivate others to think about sustainability issues surrounding non-profits because she believes it has an impact on everyone.

“I’m trying to convince people that this is an issue and a sector that touches all of our lives,” Cave said.

“We just need to think differently about how we fund things. When we donate to causes that we believe in, we shouldn’t be focused as much on which organization has the lowest administrative costs, we should instead be focused on how we fund things so non-profits can truly have the space to innovate and think about doing things better.”

“It is very much about trying to activate ideas starting with our own community and really helping people to take action and make something happen, in small ways or big ways that impact the world,” said TEDxEdmonton co-founder Ken Bautista.

Around 500 people are set to attend the conference, which first made its debut in Edmonton in 2010.

Along with Saturday’s conference, there have also been smaller, monthly lunchtime TED Talks, a TEDxEdmonton Salon Series, and come fall a TEDxEdmonton Education event will take place, all in an effort to spread ideas and inspire action.

“We have these little bursts of inspiration to kickstart things and the key is making sure that that momentum continues to build all year,” Bautista said.

“Everyone has opinions on a lot of big projects and things that are going on in the city. We hope that with TEDx, this is sort of the catalyst to really kick start some activity.”

It’s a movement Cave is proud to take part in.

“It’s the kind of audience that I want to speak to,” she said.

“Issues in Edmonton are so close to my heart and I certainly envision myself coming back after I finish school to stay and do work here, so that kind of invitation was really great.”

Cave is studying sociology and women and gender studies at the University of Toronto.

She is set to graduate in 2013 and hopes her talk at TEDxEdmonton will lead to a change in the industry she’d eventually like to return to.

“Why don’t we care more about this? Why isn’t this something that we all kind of feel an investment in?” Cave said.

“We all need to be concerned about the non-profit sector. I think it’s hugely relevant to how we live our lives on a daily basis.”

Linda Hoang is a Canadian blogger based in Edmonton, Alberta, who writes about travel, food lifestyle and pet topics. She's also a seasoned social media/digital strategist with a journalism background. Linda loves exploring the world with her husband Mike, eating their way through cities, supporting local businesses, and photographing Instagrammable Walls. She is the founder of the Edmonton International Cat Festival and a fur-mom to two cats and two dogs.
PrevPreviousPhoto of the Day: Saturday, June 9, 2012
NextPhoto of the Day: Sunday, June 10, 2012Next