On our never-ending quest to ‘Explore Edmonton,’ Mike and I found ourselves trying the city’s newest virtual reality arcade – Breakout VR located at 10107 81 Avenue (off Whyte).

Breakout VR is brought to us by some of the same owners as Breakout Entertainment, Edmonton’s very first escape game company. As readers know, I’m a huge escape game fan and Breakout’s late 2014 launch was just the first of many (seriously – there’s a ton) of escape games in our city.

Proving again that they’re on the cutting edge of technology + new trends, Breakout VR calls itself the future of gaming. Using advanced computer tech, players are transported to a simulated environment where they can play a variety of games from single player to multi-player, action to puzzle. 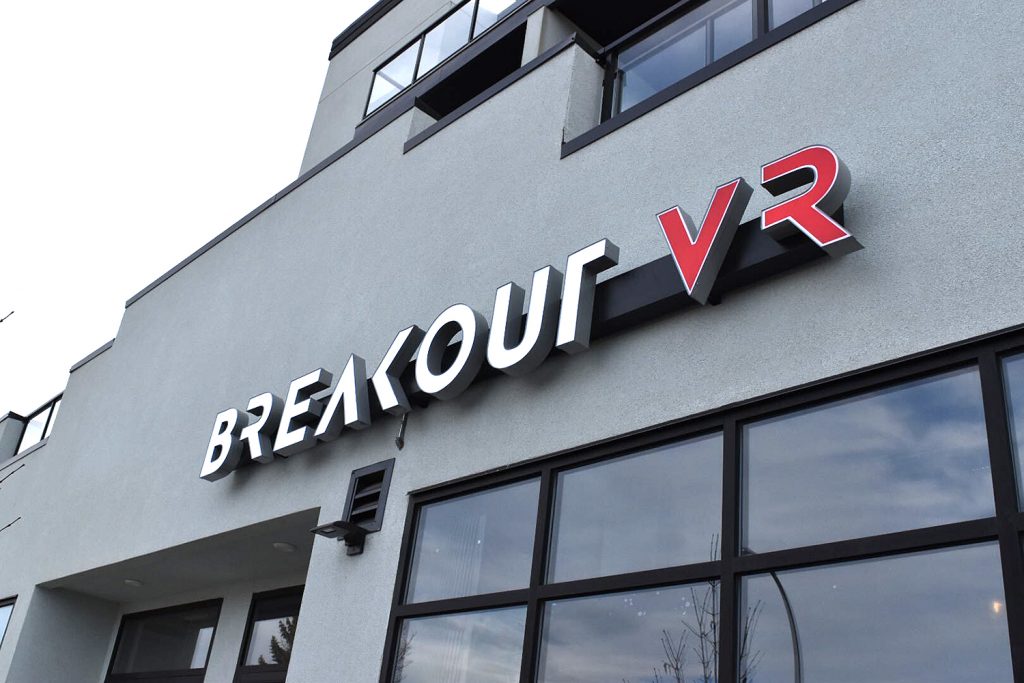 The team at Breakout invited us to try their new virtual reality arcade last weekend. Mike has been anticipating the arrival of mainstream VR/AR for quite some time so you can imagine how excited he was to get his hands on Breakout VR’s technology!

Read on for my review & enter for a chance to win admission passes below! 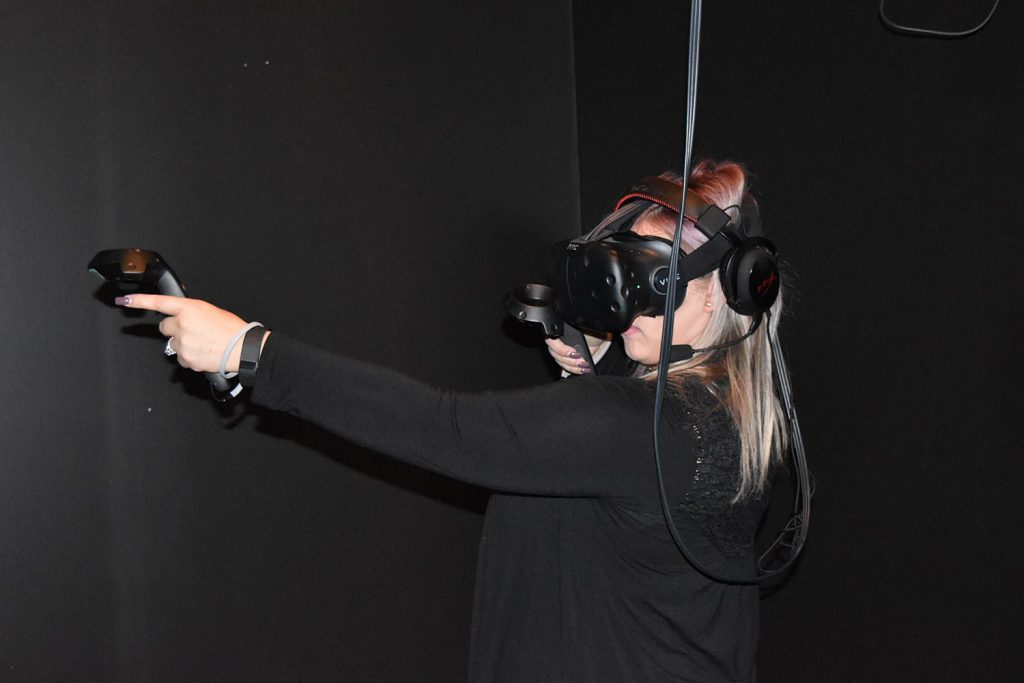 Breakout VR is broken into different partially walled rooms. When you play, staff help set you up with the virtual reality headset/glasses that go over your eyes, headphones, and two hand controllers.

We actually thought we’d all be sort of standing in a room together but groups are split up into the individual rooms and you can choose to play together as a group depending on the VR game you select.

For $15, you get an hour of gameplay – which is pretty damn affordable!

For beginners (like us), you’ll likely start out in the single player, simple games to get used to the simulated game play.

Our group all individually played Audioshield, a really fun game set to YouTube music tracks of your choice. From there we all tried a game called Space Pirate, which was a favourite for most of us! In Space Pirate, your two hand controllers act as space guns or shields used to shoot down your enemies.

I think the reason Space Pirate was such a hit was because of the way you activate your shield – when you pull your hand back behind your shoulder and snap it back in front of you, your shield appears. It’s a really cool feeling!

We tried a multiplayer game called Rec Room – where you create your own avatars and then enter different games similar to a Wii Sports environment. In virtual reality multiplayer, you join the global network – so although we were able to play with each other, we were also playing with people from around the world.

Our group also played a game called ‘The Lab’ which is actually a series of mini games that show off a lot of different aspects of VR. Longbow – a bow and arrow, tower defense game was really popular with the group and my sister-in-law Amanda really liked Robot Repair, saying it felt the most realistic (at one part during her gameplay, the floor was disappearing beneath her and she almost had to stop the game it felt so real). 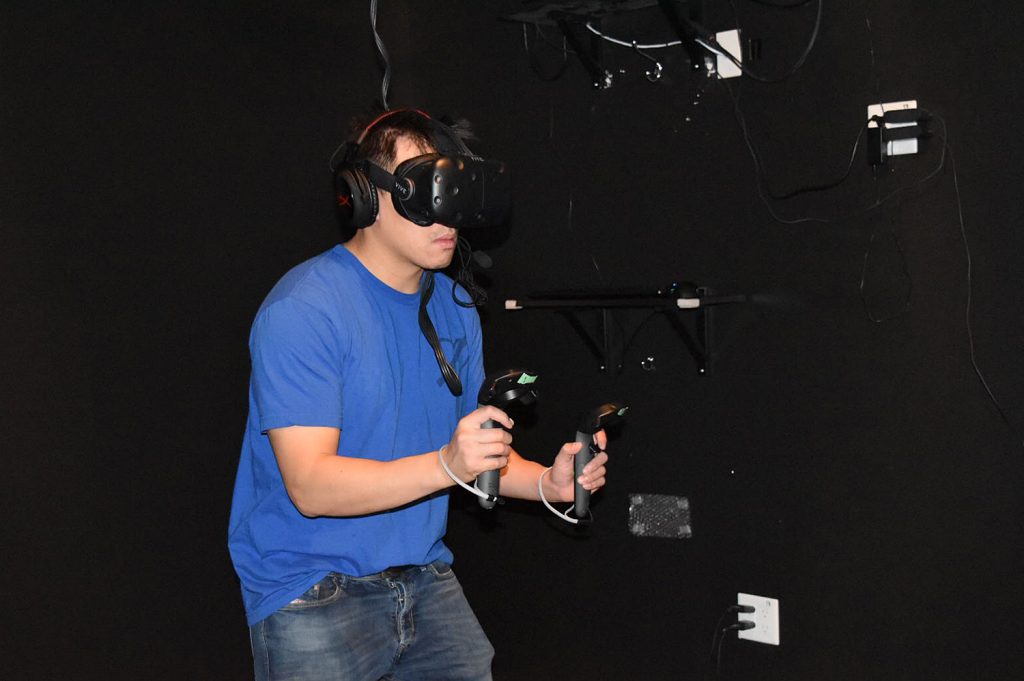 My brother didn’t want the hour to end.

While overall, I found the experience quite cool and very fun, I did find some of the game play (particularly in the multiplayer game) a bit challenging to get the hang of. I also had a bit of a struggle because of my glasses. The VR headset uncomfortably pushed my glasses tighter into my face which made it a bit harder for me to get my bearings in the VR world. Something to keep in mind if you have glasses – maybe bring your contacts for trying VR!

I also admit because of the Breakout name, I thought maybe the VR games would be more like an escape room – but it’s not really. There are escape/puzzle style games you can play, but don’t go to Breakout thinking it’s a virtual reality version of an escape game!

And while it’s definitely something you can (and should) try with a group, know that most of the game play at Breakout VR is pretty individual even if you came with a group (though to be fair, we only tried one multiplayer game, and I’m sure as this becomes more mainstream there will be more multiplayer games released!)

Overall, trying Edmonton’s new virtual reality arcade was a pretty cool experience. My brother and Mike found the whole thing especially fantastic and can’t wait to come back again. I thought it was fun and very interesting to experience, but some of the little things (it being more individual gameplay than group, the glasses clashing with the VR headset) made the experience a bit less smooth.

Though given how expensive current virtual reality headsets/systems are right now, getting an option to pay just $15 to play virtual reality games at an arcade is a pretty sweet deal. Also, maybe this is how arcades will make a come back?

Side note: there’s also another virtual reality arcade that looks like it must have opened up within days of Breakout. Maybe VR arcades will follow the way of escape rooms in this city – and we can expect to see a lot pop up in the next year?

I definitely encourage you to try VR gaming for yourself! 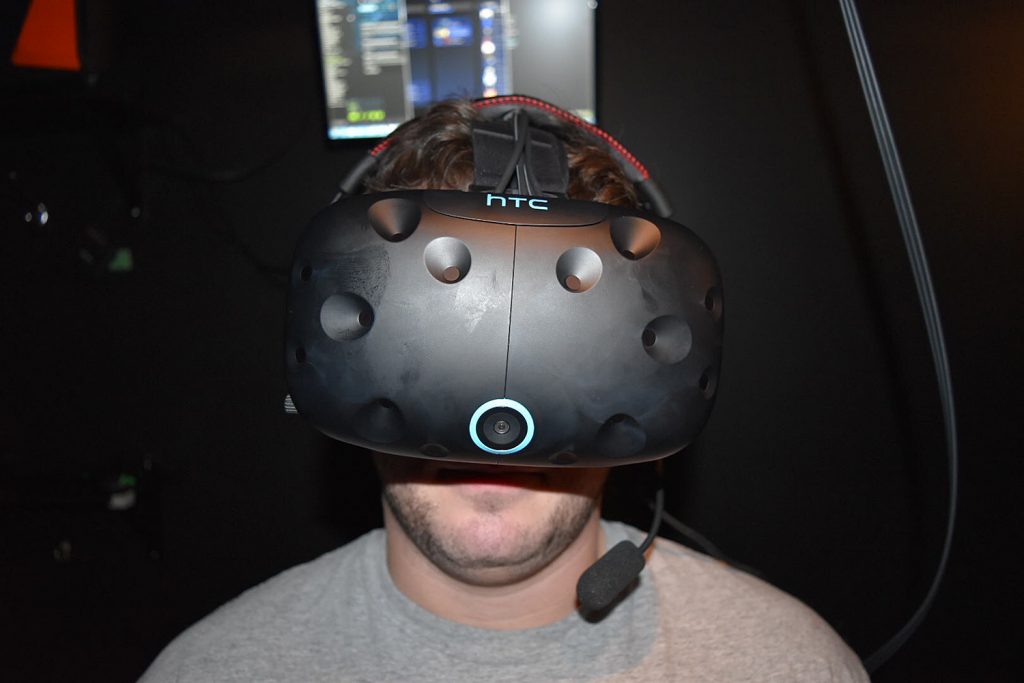 There are a few ways you can enter including:

Disclaimer: I will always provide my 100% honest opinion on this blog. Breakout VR Edmonton invited me to come try their new virtual reality arcade and run a giveaway for readers. This does not affect the opinions stated in this post.

Linda Hoang is a Canadian blogger based in Edmonton, Alberta, who writes about travel, food, lifestyle and pet topics. She's also a seasoned social media/digital strategist with a journalism background, the founder of the Edmonton International Cat Festival and co-founder of Stop Race Based Hate, an online anti-racism education tool. Linda loves exploring the world with her partner Mike, eating their way through cities, supporting local businesses, and photographing Instagrammable Walls. Linda is a fur-mom to two cats and two dogs.
PrevPreviousExplore British Columbia: Anniversary Trip to Kelowna & Vernon, B.C. (Things to Do)
NextPurina Pet People: My Pets’ Holiday Wish ListNext