This weekend, Mike surprised me with tickets to the new Ice Castle at Hawrelak Park – Canada’s first and largest ice castle and one of just four of its kind in the world.

We’d been seeing the ice castle in the news quite a bit the last few months – and especially the last few weeks as it officially opened on Dec. 30. We’d actually been invited to the launch event earlier in December but couldn’t make it, so it had been on our radar to visit for some time.

The holidays are so busy to begin with, I didn’t think we’d get to it until later in January (it’s in Edmonton until March 2016), but then Mike surprised me with tickets!

Read on for my review and scroll to the bottom for my tips on how to have the best visit to the Ice Castle!

The ice castle at Hawrelak Park.

The ice castle, which is being described a few different, magical ways – Narnia-like, a frozen fortress, beautiful, stunning, massive (all accurate descriptions) is Canada’s first and largest ice castle, and Edmonton is just one of four cities in the world to feature the incredible structure.

The ice castle was put together by a Utah-based company, which crafts everything by hand – literally the ice castle is made up of 25 million pounds of ice! I can’t even imagine that weight. 10,000 icicles were created each day during the last 2 months of construction to get the final result we saw on Saturday. Amazing!

Some parts you feel like you’re in an ice cave.

It’s recommended you pre-order tickets (especially during peak times like the holidays) so Mike had bought us tickets for a 6:30 p.m. start time on Saturday.

I think you need to go to the Ice Castle at least two times – once during the day and once at night – because you’d get a completely different feel both times. Mike thought it would be cooler if we went at night, with the different colours showing up better at night.

The changing colours at the Ice Castle in Hawrelak Park make it look even more magical!

It was very magical, but I’ve also seen photos from people who have gone during the day, and that looks more like what you’ve seen out of Narnia or Frozen, which is a different type of magic. Plus for us (we don’t have nice cameras) I’d much prefer taking non-flash, naturally-lit photos during the day.

So many cool photos featuring the Ice Castle – I need to go back during the day too! Beautiful.

Some people are even getting wedding photos done at the Ice Castle!

If you’re engaged or getting married in the next few months, you must get some photos taken at this once-in-a-lifetime location. Hell, I’d even arrange for just a fun family photoshoot at the Ice Castle, it looks so cool.

Admission to the Ice Castle ranges from about $10-$20 depending on day you go, age, and if you pre-order or get tickets at the door.

On Saturday night it was packed! We lucked out getting a parking spot because a super nice man was pulling out and waved us in to take his spot but when we left the car line to get in had doubled and was winding out of the park. I imagine this is because it was the last Saturday of the holiday break and lines should subside after this weekend. We also went during what I imagine is a peak time (6:30).

There’s an ice slide for kids!

The Ice Castle really is for all ages. The creators of the ice castle initially made the structures for their kids so this one also features a kid-friendly slide (long line-up to get on that too though).

There’s also a cool ice fountain in the centre of the structure (which takes up about a hectare of the park). 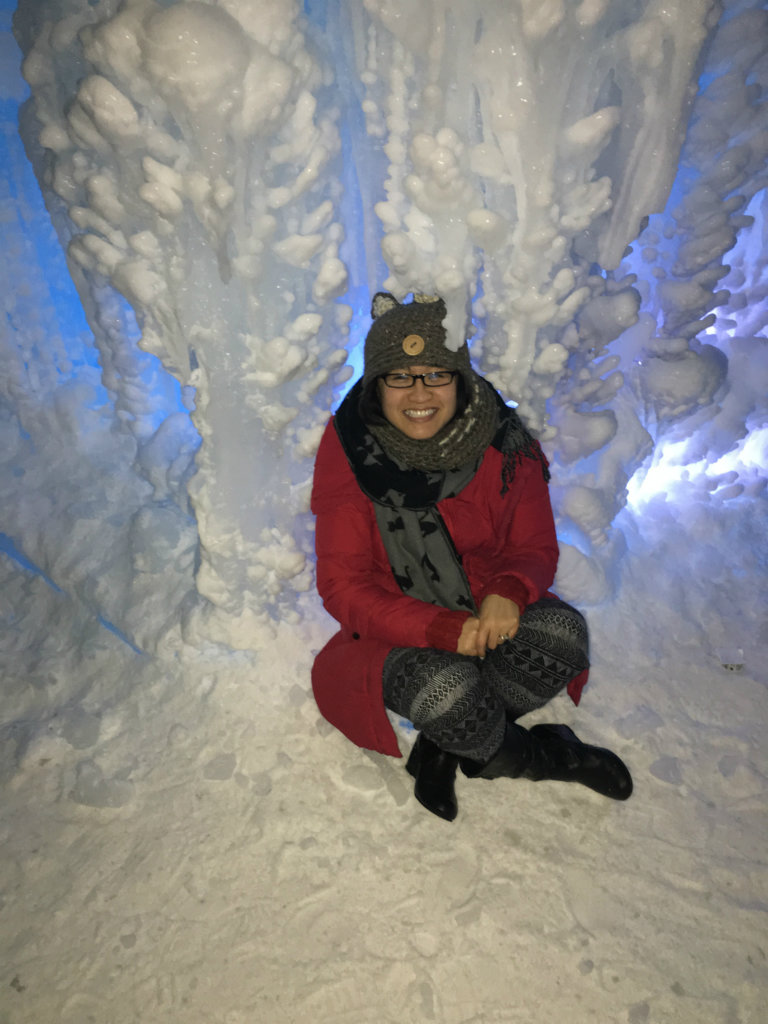 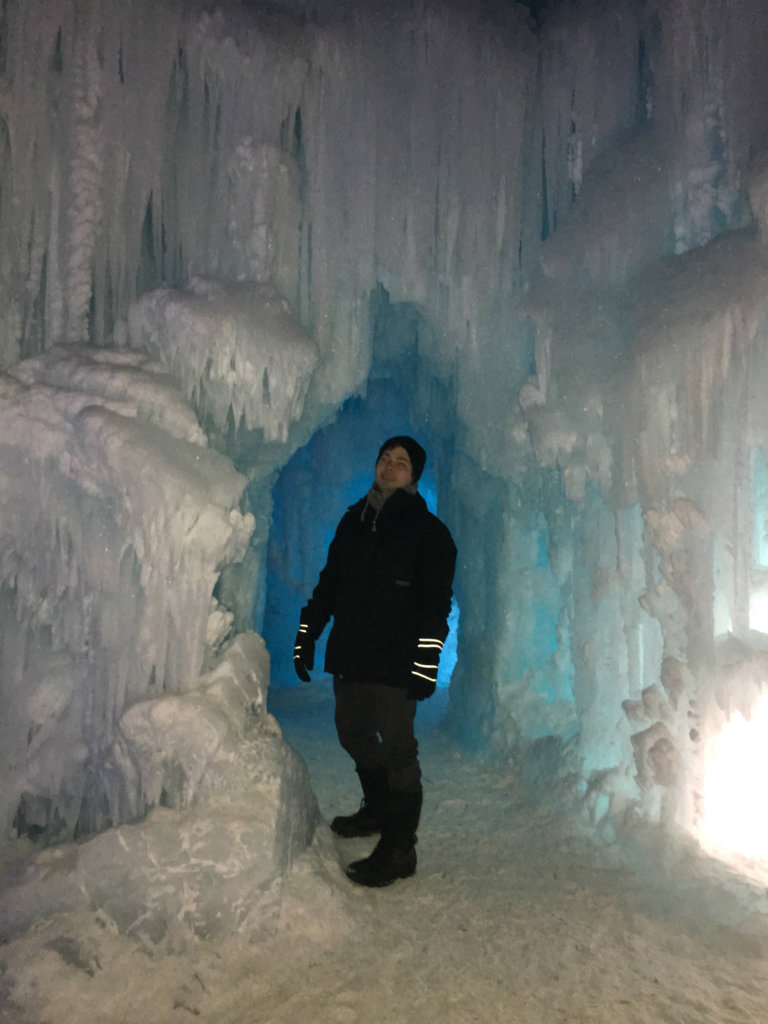 Ice castle or ice cave? Either way – so cool.

The Ice Castle doesn’t feel as big once you’re inside as it looks on the outside. You can get through the different paths and cave-like areas (really cool cave-like areas) pretty quickly once inside. Your time spent is extended if you’re doing photos like we did or if you’re waiting in line for the kid slide but after the initial loop, we were satisfied and ready to leave.

When we first walked into the Ice Castle I was reminded of the scene in Jurassic World where the kids see the amusement park for the very first time. It’s kind of like this awestruck, slow but epic kind of score. That’s how I would describe the music that was playing at the Ice Castle and I really think that ‘awestruck’ feel is what they were going for.

Some weird ice formations at the Ice Castle.

Edmonton talks a lot about embracing winter, embracing the cold, being proud of our Winter City and building events and activities based around snow and ice and the Ice Castle at Hawrelak Park does all of that.

I love Edmonton and the winters that come with it (not all the time, admittedly, but things like the Ice Castle certainly help!)

What a great winter adventure at the Ice Castle in Hawrelak Park!

What a wonderful addition to our winter city.

And what great, worldwide attention we’re getting because of it – who doesn’t want to visit Canada’s first & largest, 25 million-pound, Narnia/Frozen-like ice castle?

The icicles shouldn’t fall on you, but you do sign a waiver before going in, lol.

The Ice Castle is in Edmonton until March (weather permitting – though Mike thinks it could easily last longer if the company didn’t actually take it down, given how much ice there is and how long it would take to naturally melt).

So cool how they made this Ice Castle!

I would absolutely recommend you check it out – both at night and during the day (I’m hoping to take my mom soon, and go with my niece and nephew!)

A few of my tips on how to have the best visit to the Ice Castle:

Next on our winter city/exploring Edmonton list: the icy freezeway at the Victoria Park Oval!

So have you been to the Ice Castle yet? What did you think?!

Linda Hoang is a Canadian blogger based in Edmonton, Alberta, who writes about travel, food lifestyle and pet topics. She's also a seasoned social media/digital strategist with a journalism background. Linda loves exploring the world with her husband Mike, eating their way through cities, supporting local businesses, and photographing Instagrammable Walls. She is the founder of the Edmonton International Cat Festival and a fur-mom to two cats and two dogs.
PrevPreviousReview + Giveaway: GTFO Escape Entertainment (Win Free Game Passes!)
NextSocial Media Notes (#97) – Links for the Week of December 28 – January 3Next