Get this out of the way first:

“I often get the stink eye from my “real life friends” when they hear I’ve been spending time (in real life) with people I’ve met online. “How did you meet them?” they’ll say. “We just started talking on Twitter,” I’ll reply. “Oh.” Cue the stink eye. “That’s weird.” Is that still considered weird these days? I don’t think so. Some of the best people I know I’ve met through social networks.”

“A day after the suspect in a gruesome Montreal killing and dismemberment was arrested in Berlin, Vancouver police said a human hand and foot were delivered in separate packages to two area schools. But police did not draw any immediate links to accused killer Luka Rocco Magnotta, saying their investigation is in its early stages and they have yet to identify the victim and the origin of the disturbing packages.”

Wow! What is going on…

“Accused killer Luka Rocca Magnotta will not fight efforts to extradite him to Canada from Germany, a decision expected to advance what could be a long bureaucratic process. The 29-year-old man revealed his choice while meeting with a German judge on Tuesday, reported CTV News correspondent Ben O’Hara-Byrne.”

“The company threatened the Montreal Gazette (a Postmedia publication, as is The Vancouver Sun) with a lawsuit after the publication posted a Facebook photo of the accused killer sipping a bottle of the brew on its website… On Tuesday afternoon Labatt withdrew its complaint, explaining it had been trying to protect its brand.”

Such a sad story…

“Patients can now find out how long they will be sitting in an ER room well before they actually show up in the hospital. Alberta Health Services posted a website Tuesday that gives patients real-time wait times on its website from all Edmonton and area hospitals. The site, says AHS, will help patients decide where to go when they need access to health care.”

Cool. Though I would think that everyone would all flock to the same ER because it says it has the shortest wait time and that in effect would make it suddenly have the longest wait time, lol.

“The figure was revealed by Defence Minister Peter MacKay in a written response to an opposition question.”

What the heck are we paying for.

“Canada’s health minister announced Tuesday the feds are moving to regulate a key ingredient in a drug called bath salts — a potent stimulant linked to psychotic delusions and a case of cannibalism in Miami.”

“An army of venomous spiders invaded a town in India, killing two people — and scientists still don’t know much about the arachnids or where they came from. Like in a scene from the movie “Arachnophobia,” droves of eight-legged pests invaded the town of Sadiya in May, during a Hindu festival. Witnesses said the creepy crawlies latched onto and bit anything that moved or breathed, according to The Times of India. Doctors today are still trying to figure out what venom the spiders emit.”

“Pealing church bells, artillery salutes and cheering crowds greeted the Queen on Tuesday, the last of four days of Diamond Jubilee celebrations honouring her 60 years on the throne.”

“The Walt Disney Co. said Tuesday that it will become the first major media company to ban such ads for its TV channels, radio stations and websites intended for children. That means kids watching Saturday morning children’s shows on Disney’s ABC network will no longer see ads for fast foods and sugary cereals that don’t meet company’s nutrition standards.”

“The Wii U pairs a wireless handheld touchscreen controller — imagine a tablet computer with joysticks — with a console connected to the TV to offer so-called “asymmetrical gaming,” where a player using the Wii U GamePad will often have a different experience than players using standard Wii controllers on the big screen… The 20-odd games confirmed for the system include New Super Mario Bros. U, Pikmin 3, Mass Effect 3, Batman Arkham City: Armored Edition, Darksiders II, Aliens Colonial Marines, Lego City Undercover, Scribblenauts Unlimited and Assassin’s Creed III.”

Feels too big and clunky.

“Today, 85% of the world’s population has access to a mobile phone with voice and text capabilities. Five years from now, in 2017, the same amount of the global community will have access to high-speed 3G Internet through mobile phones, finds a new report from Ericsson. By 2017, there will be 9 billion mobile subscriptions. Half of the world’s population will have a 4G connection, and there will be 3 billion smartphone subscriptions.”

“This idea of micro identification chips implanted into human beings is not a new one it has actually been around for decades, but just recently the debate has been started again after science fiction author Elizabeth Moon insisted on every human being chipped… ‘I would insist on every individual having a unique ID permanently attached — a barcode if you will — an implanted chip to provide an easy, fast inexpensive way to identify individuals.'”

“With IP addresses now depleted, the Internet Society is leading the launch of IPv6 to allow the web to continue growing. Without adopting IPv6, people surfing the web will have to go through a transitional gateway before entering a non-updated site using IPv4, making the experience slower. On launch day Wednesday, website owners are encouraged to permanently enable IPv6 — the next generation of Internet protocol.”

“A new video website, Airtime, has just been launched by Napster creators Sean Parker and Shawn Fanning. The company’s debut , was kicked off June 5 in New York City… According to TechCrunch, “Airtime puts you onstage with a friend or matches you with an interesting stranger,” describing it as a “more fun version of Skype.” It is one-on-one communication, virtual face-to-face, a way to “re-humanize the Internet,” as the publication noted (reportedly this will expand to include groups at some point down the road).”

“Are universes inside giant black holes? Is our entire universe located inside a wormhole? This is not science-fiction, but it could answer various cosmic mysteries that plague scientists across the globe (or universe?). Science, especially when it comes to the stars, is never settled. Every day, research scientists put forth new theories to solve riddles and sometimes they are correct and other times are not. For the past several years, physicists have started to understand a new premise that is perplexing many in our universe: this universe may exist inside a black hole.”

“Stargazers around the world were united Tuesday evening as they looked skyward to watch the planet Venus as it appeared to race across the face of the sun. The next transit of Venus won’t be for another 105 years, making this a once-in-a-lifetime event.”

“A giant squid, one of the most mysterious and least understood of marine creatures, has been found floating off the south coast. Daily Telegraph fishing columnist Al McGlashan discovered the remains of the ocean titan – so fresh it still carried its ruby red colouring – about 50km off Jervis Bay.”

Sea creatures are so fascinating..

I would be interested in taking a look at ‘The Newsroom’ at this point. Right now Mike and I are re-watching LOST so

“A Scottsdale man is claiming that a Barnes & Noble bookstore discriminated against him when an employee forced him out of the store because he was a male shopper alone in the children’s area. Omar Amin, 73, said store worker Todd Voris told him that a female shopper had complained about him being in the children’s area May 4 in the store at Shea Boulevard and Loop 101 in Scottsdale. Amin, who was alone at the time, said he was in Barnes & Noble to buy books for his two grandchildren who live in Wisconsin.”

“A Texas woman made an interesting discovery in her chicken coop yesterday when she found a massive-sized egg inside one of the nests…An unusually large egg does occur sometimes, but what Smith discovered when she cracked this egg open was much rarer. The egg contained inside what was expected when one would ordinarily crack open an egg, but in addition was a second normal sized egg (weighing 55 grams) within the large egg. Not a double yolk egg, but an actual regular sized egg within the larger one.” 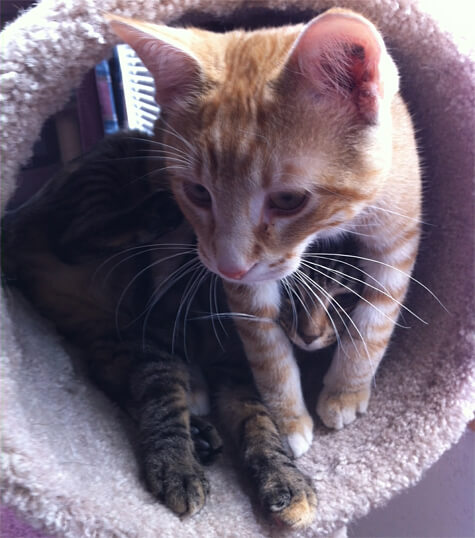 Loki decides the most comfortable way to lie is on top of Thor, lol.

Linda Hoang is a Canadian blogger based in Edmonton, Alberta, who writes about travel, food lifestyle and pet topics. She's also a seasoned social media/digital strategist with a journalism background. Linda loves exploring the world with her husband Mike, eating their way through cities, supporting local businesses, and photographing Instagrammable Walls. She is the founder of the Edmonton International Cat Festival and a fur-mom to two cats and two dogs.
PrevPreviousSocial Media Column: Friends can be found online
NextPhoto of the Day: Tuesday, June 5, 2012Next