“Days before Edmonton’s Pride Week was to kick off in Edmonton, the province confirmed gender reassignment surgery will once again receive public funding. The surgery was delisted three years ago by the Stelmach government. Health Minister Fred Horne stopped short of admitting the government made a mistake, but said the change was the right move.”

“Toll booths might provide the solution to the one-billion- dollar question surrounding Alberta’s deadliest highway, says Premier Alison Redford. While ruling out pay roads in cities like Calgary, Redford said the one place the province is seriously considering cash-collection points is on Highway 63, the route used by oilsands workers to and from Fort McMurray.”

“Weeks after two types of drug resistant bacteria were brought into Edmonton by a woman who had surgery overseas, health officials have confirmed those ‘superbugs’ lead to the death of another patient at the Royal Alexandra Hospital… Health officials also admitted hand-washing compliance rates in Alberta hospitals are part of the problem, pointing to a recent review that showed 50 percent of staff throughout the province follow proper hand washing protocols. In Edmonton, the statistic is lower, at 43 percent.”

Forgot to post this in yesterday’s Clicks. Health officials washing their hands should not even be a question… geez. Also:

“Local researchers are fighting back against a super bug linked to the death of a Royal Alexandra Hospital patient. University of Alberta microbiologist Mario Feldman is leading a study that aims to develop an antibiotic to take out the deadly bacteria Acinetobacter baumannii.”

Good to know they’re working on it.

“Nearly two weeks after a man slipped underwater on a lake west of Edmonton – and didn’t resurface – RCMP said his body has been found… Police said the body had since been taken to the Medical Examiner’s office in Edmonton, where the remains were identified as the 29-year-old Edmonton man who slipped beneath the waves of the lake on May 26.”

“Toronto has become the first major city in Canada to ban plastic shopping bags in a surprise city council vote that the mayor denounced as ‘ludicrous.’ Mayor Rob Ford, who predicted the ban will face a legal challenge, had asked city council to scrap Toronto’s contentious five-cent levy for plastic shopping bags. Council supported the mayor and voted to scrap the tax – but then also agreed with a last-minute motion to ban bags outright, beginning Jan. 1.”

“German prosecutors said Thursday a decision on the extradition of Montreal murder and dismemberment suspect Luka Rocco Magnotta could be made within days, according to The Associated Press. A spokesman for the prosecutor’s office in Berlin told AP that a request has been made to transfer Magnotta into pre-extradition custody.”

Chugging along to justice. Also…

“The widespread travels of Luka Rocco Magnotta, both geographically and on the World Wide Web, are fuelling speculation he may have killed elsewhere.

Montreal police are working with the Los Angeles Police Department to determine whether Magnotta could have been involved in the murder and beheading of a 66-year-old man in California in January. The head of Hervey Medellin was discovered near the famous Hollywood sign by a woman walking her dog on Jan. 17. A police search turned up Medellin’s hands and feet in the area, but the rest of his body remains missing.”

“With Syria lurching closer to sectarian warfare, world leaders on Thursday sought to apply new pressure on a government that they said showed no sign of honoring cease-fire agreements or halting the slaughter of noncombatants, but they remained divided on how to revive a peace process that U.N. officials conceded was in ruins. As new details emerged of the latest massacre of civilians, U.N. officials spoke for the first time of unspecified “consequences” for the Syrian government. Yet the refusal by Russia and China to embrace new economic sanctions meant that the world body was left without a clear path forward.”

Seriously… how many more must die before Assad is stopped?

“Researchers in Sweden have developed a vaccine that helps improve the symptoms of people with mild to moderate Alzheimer’s disease. The study, published in Lancet Neurology, says this is a breakthrough in the search for a cure to the dementia disease. The researchers noted the vaccine focuses on the amyloid precursor protein, which resides in the outer membrane of nerve cells and that, instead of being broken down, can form a harmful substance called beta-amyloid, which accumulates as plaques and kills brain cells.”

“Multiple CT scans in childhood can triple the risk of developing brain cancer or leukaemia, a study suggests… They said the study underlined the fact the scans should only be used when necessary and that ways of cutting their radiation should be pursued.”

I wonder what things in life we think are safe are actually ruining our lives.

“Radiation therapists with Alberta Health Services are successfully using tablet computers to help keep kids calm during treatments. A radiation therapy manager in Calgary says almost all pediatric patients under the age of seven used to be sedated before therapy. But in the last year radiation therapists were able to eliminate sedation for five out of eight children between the ages of four and seven. Mona Udowicz of the Tom Baker Cancer Centre says many young patients now remain relatively still as they watch a favourite movie, TV show or cartoon on their tablets.”

“Music training has a lifelong good impact on the aging process, says a new study out of Northwestern University… Researchers discovered that older musicians had a distinct neural timing advantage. Researchers concluded that age-related delays in neural timing are not inevitable and can be avoided or offset with musical training.”

“Former players are ganging up on the NFL, consolidating over 80 pending lawsuits into a giant “master complaint” that accuses the league of hiding information that links concussions to permanent brain injuries. Filed Thursday in Philadelphia, the suit seeks to hold the NFL responsible for the care of players suffering from long term neurological conditions including dementia. The suit also names Riddell, Inc., the helmet maker, as a co-defendant.”

“Twitter has adopted a redesigned bird as its new logo, bringing uniformity to the symbol representing its brand. The new logo, which was announced Tuesday on Twitter’s blog, replaces Twitter’s lowercase “t” and the old bird. The new bird resembles the older logo but appears to be slimmer and is also tilted upward. “From now on, this bird will be the universally recognizable symbol of Twitter. (Twitter is the bird, the bird is Twitter),” said Doug Bowman, the company’s creative director. “There’s no longer a need for text, bubbled typefaces, or a lowercase ‘t’ to represent Twitter.””

“Google Inc is deploying a fleet of small, camera-equipped airplanes above several cities, the Internet search company’s latest step in its ambitious and sometimes controversial plan to create a digital map of the world. Google plans to release the first three-dimensional maps for several cities by the end of the year, the company said at a news conference at its San Francisco offices on Wednesday.”

Mapping out the world, that Google. Also:

“Here’s a fantastic usage of Google Earth, an organization has created a project that is tracking the removal of landmines.”

“Research In Motion says it is discontinuing the lowest-priced model of its BlackBerry PlayBook tablet. A spokeswoman for the company says the Waterloo, Ont.-based company has stopped production on the 16GB Wi-Fi PlayBook. Remaining supplies at retailers and distributors will be the last quantity.”

“There’s a disturbing irony within the food industry: Many of its employees rely on food stamps… According to a new report by the Food Chain Workers Alliance, only 13.5% of food industry workers earn livable wages. The median wage is $9.65 an hour, and 86% of workers are earning either subminimum, poverty or low wages. Due to such depressed earnings, many food industry employees also struggle to just to eat, creating a rather depressing irony that those who feed us can barely feed themselves.”

“The accelerating loss of plant and animal species around the planet is becoming as great a threat to global health and prosperity as climate change, concludes a newly published review of hundreds of research studies. “We should be just as worried about biodiversity loss,” said Diane Srivastava, a University of British Columbia zoologist who helped write the paper, which appeared this week in the prestigious journal Nature.”

“The bodies of about 20 sea lions have been discovered along the coasts of Oregon and Washington over the last two months, most of them shot to death. Who did it? No one knows, but there are a few guesses as to why—the playful but voracious creatures have long been blamed by fishermen and others for lunching on prized stocks of salmon and sturgeon, which swim along the Pacific Coast and up the Columbia River.”

“Modern life may be going to your head. It’s not clear why—medicine? cars? supermarkets?—but the skulls of white Americans, and perhaps of other races and nationalities, have become slightly taller and roomier, according to new forensic research… the growth translates to roughly a tennis ball’s worth of new brain room.”

“It’s hard to believe it’s been nearly 9 years since Ellen first stepped out to her monologue mark to start the show. Here’s a rare look at that very first monologue that started us on this long and exciting road.”

Wow! Congrats to her for nine years! Also, her style has definitely changed for the better, lol.

“There are many things to say about Ariana Huffington not least of which is her seemingly endless ability to get people to go to websites. Consider this another victory, as we recently uncovered a vertical just off the beaten path of HuffPo, yet still entirely on their servers: HuffPo Sideboob.”

“A few music changes, a little editing here and there, and a movie’s tone changes completely.” 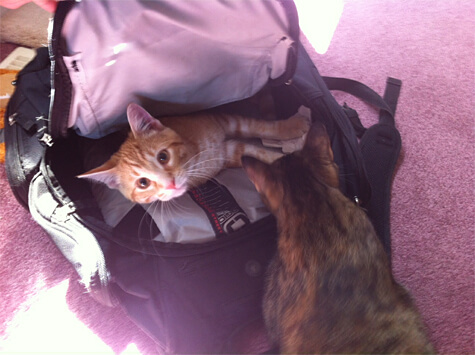 Loki and Thor getting comfortable with their getaway backpack (in case of a zombie apocalypse).

Linda Hoang is a Canadian blogger based in Edmonton, Alberta, who writes about travel, food lifestyle and pet topics. She's also a seasoned social media/digital strategist with a journalism background. Linda loves exploring the world with her husband Mike, eating their way through cities, supporting local businesses, and photographing Instagrammable Walls. She is the founder of the Edmonton International Cat Festival and a fur-mom to two cats and two dogs.
PrevPreviousPhoto of the Day: Wednesday, June 6, 2012
NextPhoto of the Day: Thursday, June 7, 2012Next