“More than 100 licensed practical nurses and health care aides at Hardisty Care Centre are expected to serve strike notice Tuesday. According to the Alberta Union of Provincial Employees, the workers at the 180-bed east Edmonton care centre at 6420 101 Avenue will begin their strike against its Vancouver-based employer, at 7 a.m. Tuesday. The AUPE says its nurses and health care aides are fed up with wages, arguing they’re not being paid enough.”

Wages are a tough thing.

“There’s still no sign of two boaters who went missing in Coal Lake, as the search for the young men entered its third day Monday. Police came up with few new leads despite bringing in divers and using underwater sonar equipment to scan the lake bottom.”

“An internal RCMP investigation into a series of sex and drinking escapades in a staff sergeant’s office revealed a pattern of sexual harassment so disturbing that senior Ottawa Mounties say it will take “considerable effort to rebuild the damaged trust of our organization.” The investigation, which has not been made public until now, reviewed seven reports about the misconduct of Staff Sgt. Don Ray, the officer in charge of the polygraph unit at Alberta’s RCMP headquarters in Edmonton.”

“This website was produced at the behest of The Edmonton Heritage Council and is intended as an interactive reproduction of the material contained in the publication Capital Modern: Edmonton Architecture and Urban Design 1940-1969.”

“Student groups in Quebec vow to continue protesting against tuition increases, even if it means breaking a new emergency law aimed at restoring order in the province. “We will continue to fight, even if there are fines,” Gabriel Nadeau-Dubois, president of the student coalition CLASSE, said at a news conference in Montreal on Monday.”

When I say “will it ever end?” the Quebec students say “nope!”

“The next time you get frustrated because a website refuses to load instantly, or a streaming video has to buffer for a few seconds, think of the surprisingly large number of Canadians still on dial-up. According to a few different estimates, there are hundreds of thousands of Canadians still travelling the information superhighway in the slow lane, who only get online after waiting for a series of bleeps, piercing shrieks and blurts of static to be belted out by their dial-up modem.”

I wouldn’t be able to handle that!

“The federal government says it doesn’t actively keep track of projects to remove asbestos from infrastructure, despite owning 318 buildings that contain the cancer-causing substance, according to a recently compiled list from Public Works and Government Services Canada. More than one-third of the buildings are in the Ottawa-Gatineau region, but the locations listed span the country from coast to coast to coast — including the Supreme Court of Canada, RCMP buildings, the East, Centre and West blocks of Parliament and the National Press Building in Ottawa.”

“Canada will withdraw all of its troops from Afghanistan after 2014 as planned, Prime Minister Stephen Harper confirmed Monday as the North Atlantic Treaty Organization summit in Chicago wrapped up. Harper said Canada will continue to support the Afghan army financially, pledging $110 million per year for the next three years. He called the contribution “generous” and said it sets an example for other nations to follow.”

“A recent study out of Missouri University of Science and Technology suggests that how individuals behave on the internet could also indicate help diagnose depression. The research, which polled 216 college students and was conducted last February, monitored individual Internet use and correlated specific web browsing patterns with high scores on a scale used to identify depressive symptoms. Researchers found that students who scored high on surveys for depressive symptoms followed similar patterns of Internet usage. Excessing chatting, frequent switching between applications and frequent email checking were found to be associated with respondents who demonstrated symptoms of depression, according to the study.”

Hm I don’t know I switch between apps a lot and check my email a lot and I don’t think I’m depressed. I used to chat a lot a few years ago but that’s declined sharply in recent years.

“Snoring and other types of ‘sleep disordered breathing’, as it is known, can deprive the body of enough oxygen for hours at a time. Scientists now believe having low blood oxygen levels can trigger the development of cancerous tumours, by promoting the growth of the vessels that feed them. They say in future doctors could help people fight the disease by stopping them snoring.”

“Playing video games isn’t often seen as the healthiest pastime for young people, but a new educational game is helping retrain the brains of students with fetal alcohol spectrum disorder (FASD), a University of Alberta professor says. Jacqueline Pei, a registered psychologist who specializes in FASD, is researching how a computer program called Caribbean Quest is improving the cognitive function of people with the condition.”

“Many parents give children smoothies and juice every day, unaware their high-acid levels and sugar content can destroy young teeth, a British doctor says. An investigation by The Sunday Telegraph reported the acid levels of popular juice drinks — including one more acidic than vinegar. Dr. Kathy Harley, dean of the dental faculty at the Royal College of Surgeons, said 50 percent of 5-year-olds now have signs of damage to their tooth enamel caused by excess acid in their diet.”

“Deceased Apple co-founder Steve Jobs played a key part in developing the next iPhone, which is expected to be redesigned and have a larger screen than past models. Jobs, who died in October a day after the iPhone 4S was announced, worked closely on the sixth-generation iPhone as well, according to a new report.”

Jobs’ final iPhone. I will be upgrading mine to it when it comes out!

“When Apple launched its current line of operating systems, called OS X, it chose to name the various versions after cats, starting with “Cheetah” in 2001. Apple never gave a reason why, but it was a very fitting name, seeing as Apple was far behind its competitors at the time and needed to cover a lot of ground very quickly, like a cheetah could. And now, more than a decade later, Apple is sitting at the top, and again very fittingly, the next version in the line of OS X is named Mountain Lion. All very nice metaphors, but what happens when they Animal Kingdom runs out of cats?”

What a fun article topic! Haha!

“A new social network has an interesting premise: connecting people around the world based on what they want to do before they die. Called My Last Wish, the app encourages users to post wishes on a ‘Wish Wall’ and then befriend others who might share their dreams.”

“In the wake of the IPO of social-networking giant Facebook, Microsoft has quietly launched So.cl, its own social networking foray. However, So.cl isn’t designed to be a Facebook challenger. The project, the details of which leaked out last year, is designed to give students the ability to network with their peers to share information.’

“Facebook shares have fallen sharply on a second day of trading, leading to questions about the valuation of its IPO and the handling of the sale by its bankers. At the close of business on Monday, shares in the social networking site were off more than 10%, down to $34.03 from the initial price of $38. The market value of the firm took a $10bn hit as a result of the slide.”

I’m sure it’ll bounce right back up.

“The average total price tag for a wedding last year topped $27,000, reports TheKnot.com, marking the first uptick since 2008. Expect the expense of getting hitched to continue upward, reflecting both rising financial confidence among couples and their parents and rising prices for wedding essentials — everything from gold and platinum to hot hors d’oeuvres.”

“Hundreds of pet owls are reportedly being abandoned by ex-Harry Potter fans across the UK as JK Rowling’s Potter craze wanes after the release of the final film version last year.”

“Remains of an enormous turtle, which was the size of a Smart Car, have been unearthed in a Colombian coal mine. The shell alone of the 60-million-year-old turtle, Carbonemys cofrinii, aka “coal turtle,” is large enough to be a small swimming pool. Its skull is roughly the size of a regulation NFL football.”

“The desert sands of Namibia is home to the Golden Wheel Spider, a spider that has an interesting tactic from escaping predators.”

Fascinating. And so creepy.

“Comics starring the Avengers and X-Men have a rich tradition of alternate realities — and many of these parallel dimensions are complete hellholes. Here are ten of the worst universes in the history of Marvel Comics. In many of them, absolutely every single superhero you know and love has been put through the meat grinder.”

“In late March, Stephen Colbert expanded his super PAC experiment, admonishing his late-night viewers to start organizations of their own on college campuses across America. They listened, and now the Federal Election Commission’s roster of approved super PACs is filled with groups registered to addresses in college towns.” 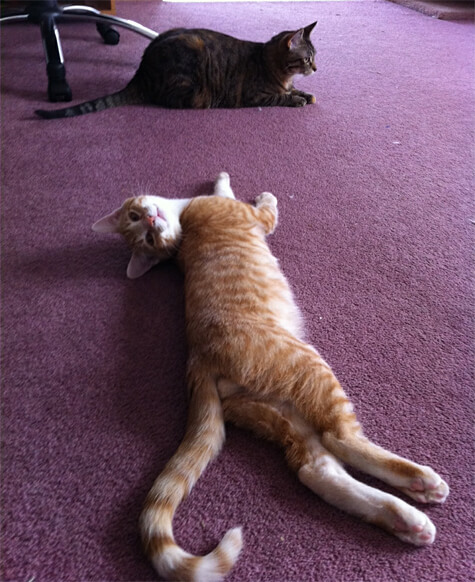 Linda Hoang is a Canadian blogger based in Edmonton, Alberta, who writes about travel, food, lifestyle and pet topics. She's also a seasoned social media/digital strategist with a journalism background, the founder of the Edmonton International Cat Festival and co-founder of Stop Race Based Hate, an online anti-racism education tool. Linda loves exploring the world with her partner Mike, eating their way through cities, supporting local businesses, and photographing Instagrammable Walls. Linda is a fur-mom to two cats and two dogs.
PrevPreviousPhoto of the Day: Monday, May 21, 2012
NextNews Online: Charges against youth reinstated in 2009 double homicideNext