Clicks of the Day is a daily round up of news posted Sunday through Thursday.

“Tinder, dry conditions across the province are feeding the flames in three out of control wildfires burning in the central and northern parts of Alberta. Two major blazes are burning near Lodgepole and Boyle. And at least one family in the Grasslands area has already lost their summer home.”

I hope these don’t turn into Slave Lake Part 2.

“The Edmonton Oil Kings built an early lead on Sunday and never relinquished it for a 4-1 victory over the Portland Winterhawks to win the Western Hockey League’s Ed Chynoweth Cup. Edmonton now advances to the Memorial Cup for the first time in modern franchise history.”

Good for them! There’s nothing quite like Edmonton hockey fans celebrating the successes of their team. :)

“After months of violent student protests over tuition increases, Quebec’s Education Minister Line Beauchamp resigned from politics Monday. At a news conference with Premier Jean Charest, Beauchamp said she’s not leaving office because she was intimidated by the strikes and demonstrations. ‘I am not giving up in the face of vandalism and civil disobedience,’ said Beauchamp, who will give up her Montreal-area seat. ‘I am resigning because I no longer believe I’m part of the solution. I haven’t been able to solve this important conflict and I take responsibility.'”

And the drama continues.

“The microfungus collection and herbarium at the University of Alberta has been nurturing fungi for more than 50 years. And since 1990 it has been considered a “unique” national resource worthy of federal money. No more. Funding for the collection, and dozens of other “major” and “unique” science facilities and resources across Canada, has been hit by federal cuts in what is being described as a “disaster” for Canadian science.”

“New standards for financial institutions and telecommunications companies to guide the use of mobile devices in retail purchases were released Monday by the Canadian Bankers Association. The voluntary guidelines set out how these two industries will work together as the new smartphone technology is rolled out across the country. While mobile banking using an app on your smartphone isn’t exactly new technology, paying for items with a swipe of that device may soon be the norm. It’s also expected some of the country’s major banks will soon announce partnerships with telecommunications companies to get the technology off the ground.”

“Trayvon Martin’s mother will get eight months of paid vacation time from her Miami-Dade County job thanks to donations from her colleagues. The Miami Herald reports that 192 county employees took advantage of a county resolution allowing them to donate some of their own paid vacation days and sick leave to Sybrina Fulton and Martin’s aunt, Yolanda Knight Evans, who received nearly nine weeks of vacation time. Fulton works at the county housing authority; Evans works at the water and sewer utility.”

“A team out of the University of Leeds has already produced molecular signatures for two forms of a childhood respiratory-disease virus… The researchers say their next step will be to test more lethal strains of influenza, such as bird flu, and compare the resulting barcodes. Because flu viruses can mutate so quickly and so often, being able to test new strains quickly could help public health officials better manage coming epidemics and perhaps even ward off global pandemics.”

“Having your medical condition publicly announced is rarely welcome, as anyone with an indiscreet pharmacist can attest. But for a growing number of Canadians, advertising illness can be a matter of life and death — and they’re choosing a decidedly permanent way of doing so. The Canadian Medical Association Journal reported Monday that medical tattooing “appears to be a trend on the rise,” with people inking everything from chronic conditions to emergency health directives onto their skin.”

“The stigmatization of obesity begins in preschool: Children as young as 3 tell scientists studying the phenomenon that overweight people are mean, stupid, ugly and have few friends. It intensifies in adulthood, when substantial numbers of Americans say obese people are self-indulgent, lazy and unable to control their appetites. And it translates into poorer job prospects for the obese compared with their slim peers. It may be the nation’s last, accepted form of prejudice. But the stigmatization of obesity has repercussions beyond the pain it inflicts on its targets: It threatens to impede efforts to fight the obesity epidemic.”

“Canadians have made slight progress in the battle to combat chronic disease through diet choices even as the nation’s children fall even further behind, a study from an independent think tank suggested Monday. While adults have slowly reduced their intake of damaging fats and stepped up their fruit and vegetable consumption over the past two decades, researchers at the Conference Board of Canada found that children’s eating habits have continually deteriorated over the same period.”

“Twitter will soon begin emailing you a weekly digest of your own feed. The summary will include tweets and links that are likely to be important to you based on what the people who you follow share. It will also include the “most engaging” tweets and stories those people saw in their own feeds, if they retweet or favorite them.”

Cool but hopefully this doesn’t mean you guys stop checking on my Clicks of the Day!

“Canon Inc. is moving toward fully automating digital camera production in an effort to cut costs — a key change being played out across Japan, a world leader in robotics. If successful, counting on machines can help preserve this nation’s technological power — not the stereotype of machines snatching assembly line jobs from workers, Jun Misumi — company spokesman, said Monday. The move toward machine-only production will likely be completed in the next few years, perhaps as soon as 2015.”

“Before setting foot outside, about 45% of consumers have already chosen where to eat with the help of an online dining guide. Online reviews are a huge decider of what’s for dinner — 57% of patrons rely on them.”

“Nearly nine in 10 Canadian homeowners surveyed recently said that being debt-free was key to their idea of a successful retirement — even more than most lifestyle factors. Only having good health was listed by more people, according to the survey of about 2,000 Canadian homeowners conducted for Manulife Bank. The dream of being debt-free was more important to the respondents than living near family, keeping busy with a hobby or volunteer work or having a broad group of friends.”

“A team at the Lawrence Berkeley National Laboratory has engineered a tiny device coated with viruses that generate electricity when stimulated by the touch of a finger. The postage stamp-sized device could lead to the development of a new class of “viral electronics” that run on clean energy harvested from the everyday movements of people such as walking across a floor or opening doors.”

“Since their discovery in 1994, the spectacular paintings of lions, rhinos, and other animals in southern France’s Chauvet Cave have stood out as the oldest known cave art, clocking in at about 37,000 years old.* But there have been occasional sightings of other cave art that is equally ancient, although its dating has been more uncertain. Now a team working at another site in the south of France claims to have discovered what appear to be engravings of female genitalia that are as old as or older than Chauvet, possibly making them the world’s most ancient cave art.”

I feel like it could be something other than female genitalia it’s really just a circle with a line in the middle, lol.

“Arachnophobes can usually take comfort in the fact that spiders are solitary creatures. The vast majority of the almost 40,000 known arachnid species have pretty miserable social skills, so they tend keep mostly to themselves. But there exists a small handful of around two dozen species — known collectively as “social spiders” — that get on surprisingly, unsettlingly, terrifyingly well in the company of conspecifics. Anelosimus eximius is one such species.”

Could you imagine a pack of spiders coming at you? Shudder.

“Britney Spears and former Disney Channel star Demi Lovato officially joined the U.S. version of The X Factor on Monday, leading creator Simon Cowell to pledge the second season would seriously kick butt when it returns in September. Spears, 30, the world’s biggest pop phenomenon of the 2000s, and Lovato, 19, will fill the judge’s slots left open by Paula Abdul and Nicole Scherzinger, who were both fired by Cowell after a disappointing first season in 2011.”

I don’t understand how Demi Lovato is supposed to be better than Paula or Nicole. Not that I really watched the X Factor or will even watch it this year but I just find it strange. She doesn’t have that much experience!

“Professional body piercer Dave Hurban is a man attached to his iPod. Literally. Hurban, 21, who works in a tattoo parlor in Newfield, New Jersey, implanted four metal studs in the skin of his wrist and secured his iPod to them magnetically.”

I guess that’s … innovative … of him?

“Novels may have a lot more power than we think. When you identify with a literary character, like Katniss Everdeen of the “Hunger Games” books, there’s a good chance you’ll become more like her, new study shows. Researchers have found that when you lose yourself in a work of fiction, your behaviour and thoughts can metamorphose to match those of your favorite character, according to the study published early online in the Journal of Personality and Social Psychology. The researchers believe that fictional characters can change us for the good.”

“Alex Aan faces up to 11 years in prison, ostracism from his family, community, and country, and possible physical violence for admitting he is an atheist in a country where faith in God is mandatory. Indonesia is home to the largest Islamic population in the world, but the government grants freedom of religion to Islam and five other belief systems: Catholicism, Protestantism, Buddhism, Hinduism, and Confucianism. However, insulting a major religion is a crime, and denying the existence of God is considered blasphemy and is punishable by jail time.”

“Anyone who has ever been in a custody battle can probably attest to how difficult, and expensive, the proceedings can be.
One N.Y. man is going through a costly battle in court. He’s fighting to regain custody of his dog.”

Wow! Well animals really do become a part of your family but wow!

“Reality TV is giving birth to some of the most popular baby names. No, not Snooki. But Mason, as in Kourtney Kardashian’s son, jumped 10 spots to become the second most popular name for newborn boys in 2011. The more traditional Sophia is the new top name for girls, while Jacob is No. 1 for boys for the 13th straight year, according to the list released Monday by the Social Security Administration.”

At least the most popular this year isn’t Tree or something, lol. 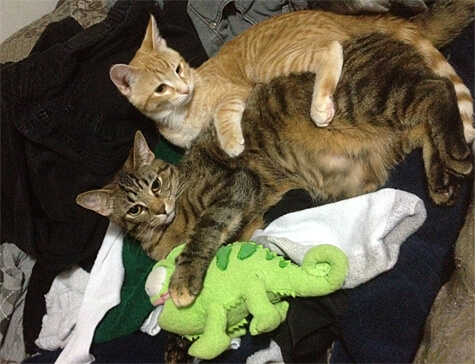 Lol we walked into the bedroom and found the kitties like this! With Pascal! SO CUTE!!!!

Linda Hoang is a Canadian blogger based in Edmonton, Alberta, who writes about travel, food lifestyle and pet topics. She's also a seasoned social media/digital strategist with a journalism background. Linda loves exploring the world with her husband Mike, eating their way through cities, supporting local businesses, and photographing Instagrammable Walls. She is the founder of the Edmonton International Cat Festival and a fur-mom to two cats and two dogs.
PrevPreviousPhoto of the Day: Monday, May 14, 2012
NextClicks of the Day: Tuesday, May 15, 2012 Edition!Next