“The parents of Travis Baumgartner, accused of killing three of his co-workers and injuring another in an armoured car robbery at the University of Alberta, say their son’s alleged crime has left them “heartbroken.” “There is not even words to say how sorry we are for what has happened to these victims, and the families that are involved,” Baumgartner’s sobbing mother, Sandy Baumgartner, told CTV Edmonton. “If we could take it back, if there was anything that could be done, we would.” Baumgartner’s father, who did not want to give his first name or appear on camera, said: “We ourselves are heartbroken and truly devastated.””

“The House of Commons sent the Harper government’s budget legislation to the Senate Monday night, bringing the 425-page bill one step closer to rewriting dozens of Canadian laws in areas such as environmental protection, old age security payments, and employment insurance.”

“A new report by the United Nations reveals that Canada was among the world’s top 10 refugee destinations in 2011, receiving 25,000 asylum applications.”

We’re a good place to be.

“The UN High Commissioner for Human Rights is set to criticize Canada for the controversial law passed by the province of Quebec to clamp down on student tuition protests. Navi Pillay, the United Nations’ highest human rights official, is expected to lash out at the country, seen as one of the freest in the world, in a Monday address to the 47-nation UN Human Rights Council, reports the Geneva-based monitoring group UN Watch, which obtained an advance copy of her speech.”

“The man accused of murdering and dismembering a Chinese university student in Montreal is back in Canada to face prosecution after an international manhunt. Luka Rocco Magnotta landed at Montreal’s Mirabel Airport just before 7 p.m. ET Monday aboard a military transport flight from Berlin. He was closely guarded by six Montreal police officers on the flight.”

“World leaders pressured Europe on Monday to take ambitious new steps to resolve its debt crisis after a victory for pro-bailout parties in a Greek election failed to calm markets or ease worries that wider turmoil could derail the global economy.”

Yeah should get on that.

“A team of researchers inspired by the 222 food-related health claims recently approved by the European Commission have come up with one meal that incorporates them all… Rather than a meal you might enjoy at a restaurant or even at home, the menu that Berryman’s team of scientific, regulatory and marketing experts devised is designed to be enjoyed in the air.”

Kind of lame that it’s designed for an in-flight meal and not a meal typical people have on a regular basis, lol.

“Canadian boys who drink pop and other sweetened beverages are at higher risk for obesity and overall, the sugary drink pattern for kids is heading in the wrong direction, a new study suggests.”

Tsk. I blame parents. Offer water and juice. That’s what I’ll do!! Lol.

“Next time you enter a new hotel room, you might think twice before touching the light switch or reaching for the remote. Those are two of the top surfaces most likely to be contaminated with potentially sickening bacteria, according to a small new study aimed at boosting cleaning practices at the nation’s hotels and motels.”

Well we can’t think twice about it because these are things we need to touch if we’re in a hotel room, lol. But good to know. (Always bring hand sanitizer with you!)

Obesity is threatening the world’s future food security, according to a study published Monday that calculated the weight of the global population at 316 million tons… In a report published in the journal BMC Public Health [PDF file here], the researchers estimated that 17 million tons of the global body mass was due to people being overweight.”

“Stress and psychological angst may be as deadly to the brain as they are to the heart, a large new study suggests. Researchers who followed nearly 69,000 British men and women over eight years found that psychological distress was associated with an increased risk of death from stroke.”

“The tablet market saw a new rival today as Microsoft announced its latest innovation — the “Surface.” The 10.6-inch tablet is 9.3 mm thick, weighs just under 1.3 pounds and features a magnetic case that doubles as a full multi-touch keyboard. The device can access all Windows applications, including Xbox, and features a new application for Netflix.”

“Facebook has acquired Face.com, a facial recognition start-up, in a likely attempt to make photo-tagging easier on the social network. The acquisition was rumored last month, but is now official. According to TechCrunch, Facebook will spend around $100 million on the purchase–roughly one tenth of what the company plans to spend on Instagram.”

“The spread of information would come to a screeching halt, revolutions would take longer, your favourite Internet companies would have never existed” and more!

Scary. I hope we are never without the Internet.

“The median income of Canadian families held steady in the 2008-to-2010 period, a contrast to the plunge in wealth south of the border. Median after-tax income for families of two or more people was $65,500 in 2010, unchanged from 2009 and the third straight year of little change in after-tax income, Statistics Canada said Monday.”

“New research by scientists in Spain suggests that rather than the universe expanding, as is generally believed, time is gradually slowing down and will eventually stop altogether… So, for those of you who feel like there just aren’t enough hours in the day, a time will come, it seems, when there really won’t be.”

“Chinese scientists say they have created a genetically modified cow whose milk is healthier because it is low in lactose. The scientists have also developed a cow that produces milk rich in health promoting omega-3 fatty acids. But the announcement has only triggered fears about “Frankenstein food.””

Not okay with us messing around with animals like this. (Yesterday’s story on genetically-modified mosquitos that won’t carry malaria is different).

“We’re [The Guardian] inviting you to popularise 10 more British species by giving them a colourful common name to go alongside their colder Latin classification. A sea slug, wasp and barnacle are among the species we’re inviting you to name, as they – like the majority of British species – currently don’t have a common name. All 10 are endangered or threatened in some way.”

“A kindergarten teacher in San Antonio, Texas, was fired and charged after she allegedly tried to deal with a class bully by giving him a taste of his own medicine. The teacher at Salinas Elementary School allegedly had the class’s 24 students line up and take turns hitting six-year-old Aiden Neely, whom she’d deemed a violent bully, ABC News reports. “He was hit on the head, in the face, on the back. And all the kids hit him twice,” Amy Neely, the boy’s mother, told ABC.”

“Jessie Barndt was walking to class at UW-Madison one day when she saw her destiny drive by. It was shaped like a hot dog… On Friday, she graduated from Hot Dog High, a three-week boot camp where she and 11 other recent college graduates learned how to maneuver the Wienermobile, promote Oscar Mayer products and beef up on puns like “Have a bun-derful day,” and “Frank you very much.” More than 1,000 college seniors from across the country apply for 12 spots each year, according to Ed Roland, a marketing manager with Kraft Foods, the parent company of Madison-based Oscar Mayer.”

“Barry Eastwood, 54, a Salford, Manchester, grandfather, stumbled as he left the bank on Friday. The £1,000 cash ($1605 CAD) he had withdrawn to pay his car insurance blew away in a gust of wind… “I just saw loads of lads jumping up and grabbing the money and I thought, ‘I’ve had it now.'” To Eastwood’s surprise, the people snatching up his cash were actually helping him collect his lost funds. “I thought it had all gone but people kept coming up to me and saying, ‘Here you are mate,'” Eastwood said.”

There are good people out there. 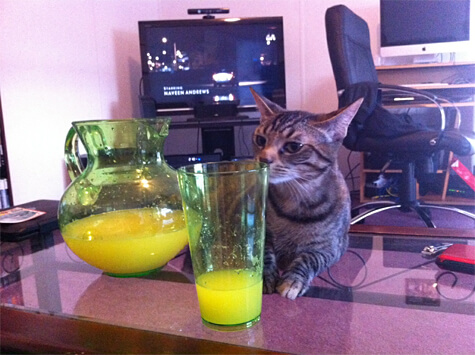 Thor trying to get in on our summery pitcher and cup. :)

Linda Hoang is a Canadian blogger based in Edmonton, Alberta, who writes about travel, food, lifestyle and pet topics. She's also a seasoned social media/digital strategist with a journalism background, the founder of the Edmonton International Cat Festival and co-founder of Stop Race Based Hate, an online anti-racism education tool. Linda loves exploring the world with her partner Mike, eating their way through cities, supporting local businesses, and photographing Instagrammable Walls. Linda is a fur-mom to two cats and two dogs.
PrevPreviousPhoto of the Day: Monday, June 18, 2012
NextSocial Media Column: Leave Facebook alone!Next