“Police said Sunday that triple-murder suspect Travis Baumgartner is being held in custody in Langley, B.C and anticipate he will be transferred back to Edmonton within the next week. EPS Supt. Bob Hassel said five homicide detectives and three forensics investigators flew into Langley Saturday night and are currently sifting through evidence and interviewing Baumgartner. Baumgartner, 21, was arrested without incident around 4 p.m. Saturday at the Lynden, WA U.S.-Canada border south of Abbotsford, B.C.”

Great news. Glad he has been captured.

“A memorial ride took place Saturday in honour of a Good Samaritan recently killed in a hit-and-run… Green was new to Edmonton and had just moved to the city from Toronto six months ago, but friends said in that short time Green had touched a lot of lives. Friends said Green was passionate about motorcycles so they went on a ride Saturday to honour his memory and show Green’s family in Ontario just how much the Edmonton community cared about him.”

I think that’s so nice of his friends. And to have only been here six months and have friends like that, he must have really been a great guy.

“A federal arbitrator ruled in favour of Air Canada in their 14-month-old labour dispute with the company’s unionized machinists. Arbitrator Michel Picher ruled to impose the airline’s final contract offer on Sunday. The five-year contract would be in effect until March 31, 2016.”

Never a win for the little guy~

“Members of the British rock band Radiohead said they are “shattered” by the death of their drum technician, who was killed after a stage collapsed at Toronto’s Downsview Park hours before the band was scheduled to perform Saturday night. Scott Johnson, 33, was pronounced dead at the scene after the massive stage collapsed.”

“The British Columbia Supreme Court struck down the laws banning doctor-assisted suicides Friday, calling them unconstitutional and discriminatory. The court ruled in favour of the plaintiffs who argued that the ban infringed on patients’ charter rights, bringing to a close a months-long trial that reignited the national debate on assisted suicides.”

“Airports and border crossings across Canada are being wired with high-definition cameras and microphones that can eavesdrop on travellers’ conversations, according to the Canada Border Services Agency. A CBSA statement said that audio-video monitoring and recording is already in place at unidentified CBSA sites at airports and border points of entry as part of an effort to enhance “border integrity, infrastructure and asset security and health and safety.” As part of the work, the agency is introducing audio-monitoring equipment as well. “It is important to note that even though audio technology is installed, no audio is recorded at this time. It will become functional at a later date,” CBSA spokesman Chris Kealey said in a written statement.”

Big brother. Not particular fond of this.

“A small town in eastern Quebec remains in shock after two young women from the community were found dead while on vacation across the world. Evidence suggests the pair may have been been accidentally poisoned while holidaying in Thailand.”

“The pro-bailout New Democracy party appeared poised to come out on top in Greece’s national election Sunday, and quickly proposed forming a pro-euro coalition government… Official projections Sunday showed no party would win enough of parliament’s 300 seats to form a government. However, Greece’s two traditional parties — New Democracy and PASOK — will be able to form a coalition.”

Hope things get better over there…

“The Muslim Brotherhood declared early Monday that its candidate, Mohammed Morsi, won Egypt’s presidential election, even as the military handed themselves the lion’s share of power over the new president, enshrining their hold on the state and sharpening the possibility of confrontation with the Islamists. With parliament dissolved and martial law effectively in force, the generals made themselves the country’s lawmakers, gave themselves control over the budget and will determine who writes the permanent constitution that will define the country’s future. But as they claimed victory over Hosni Mubarak’s last prime minister Ahmed Shafiq in the election, the Brotherhood challenged the military’s power grab.”

“Japan’s government on Saturday approved bringing the country’s first nuclear reactors back online since last year’s earthquake and tsunami led to a nationwide shutdown, going against wider public opinion that is opposed to nuclear power after Fukushima.”

Yeah probably not a good idea…

“Crews in northern Colorado braced for powerful fire-fanning winds as they battle a blaze that has scorched about 85 square miles of mountainous forest land and destroyed at least 181 homes, the most in state history.”

“An estimated 13.7 million Americans with a history of cancer were alive on January 1, 2012, according to a new report from the American Cancer Society (ACS) in collaboration with the National Cancer Institute. Researchers expect the number of cancer survivors to rise to 18 million by 2022… Unfortunately, doctors may not be prepared to deal with the problems cancer survivors face.”

So everyone please don’t smoke near me.

“Does breast milk transmit the virus or protect against it? New research from the University of North Carolina School of Medicine explores this paradox in a humanized mouse model, demonstrating that breast milk has a strong virus killing effect and protects against oral transmission of HIV. “This study provides significant insight into the amazing ability of breast milk to destroy HIV and prevent its transmission,” said J. Victor Garcia, PhD, senior author on the study.”

“Canada is losing the war against obesity because we’re ignoring one of its major drivers, doctors say: the state of our mental well-being. Some say obesity and mental health are so intricately entwined, they should be considered a “double epidemic.” Depression, anxiety, sleep disorders, attention deficit disorders, post traumatic stress, addictions — all can cause changes in appetite, energy and metabolism that can prime people to gain weight. What’s more, antidepressants, mood stabilizers and newer generation anti-psychotics — drugs Canadians are being prescribed in record numbers — can themselves cause rapid and dramatic weight gain.”

“Facebook Inc has agreed to pay $10 million to charity to settle a lawsuit that accused the site of violating users’ rights to control the use of their own names, photographs and likenesses, according to court documents made public over the weekend. The lawsuit, brought by five Facebook members, alleged the social networking site violated California law by publicizing users’ “likes” of certain advertisers on its “Sponsored Stories” feature without paying them or giving them a way to opt out, the documents said. The settlement was reached last month but made public this weekend. Facebook declined to comment on Saturday.”

“Canadian households have hit a dubious new record for debt. Fresh Statistics Canada data shows the ratio of debt to personal disposable income rose to 152 per cent last quarter, up from 150.6 at the end of 2011. The number will likely be of concern to Mark Carney, who heads the Bank of Canada, which warned again this week that the record level of household debt leaves Canadians vulnerable to an economic shock.”

“About three weeks ago, the US Postal Service delivered an ordinary envelope to Mark’s door. Inside was a tiny plastic bag containing 10 tabs of LSD. “If you had opened it, unless you were looking for it, you wouldn’t have even noticed,” Mark told us in a phone interview… Through a combination of anonymity technology and a sophisticated user-feedback system, Silk Road makes buying and selling illegal drugs as easy as buying used electronics – and seemingly as safe. It’s Amazon – if Amazon sold mind-altering chemicals.”

“The Canadian debut of the cumbersomely named Porsche Design P’9981 Smartphone from BlackBerry. For $1,890, the P’9981 comes with a stainless steel frame, leather back and a touch-screen. It also features all manner of accessories, such as branded batteries and a steel-and-leather charging pod. Customers who pick up one of these things will also get a “premium” BlackBerry PIN, presumably something memorable, akin to a custom licence plate. The phone’s user interface has also been customized, but you’re still getting most of the same features you’ll find on one of those proletarian BlackBerrys.”

Wtf. This is not helping you, RIM.

“Researchers at the University of California Irvine say they have created a mosquito incapable of transmitting malaria, an advance with the potential to change the lives of hundreds of millions in Africa and other malaria-plagued regions of the world.”

“Last year, a mysterious UFO-shaped 18.2m disc was discovered in the bottom of the Baltic sea by a Swedish ocean exploration team using sonar. Now they have managed to get near it and take photographs. According to diver Stefan Hogeborn, they have never seen anything like this.”

“Astrobiologists have deduced a few answers by combining their knowledge of life on Earth with their understanding of the cosmos as a whole. Their profile of ET might not be what you expected.”

“A history-making event came to a successful conclusion Friday night as daredevil Nik Wallenda stepped off his tightrope onto Canadian soil, ending a tense 25-minute journey across Niagara Falls… he was greeted by two border guards when he stepped onto Canadian soil. “What is the purpose of your trip?” asked one guard. Wallenda’s answer was simple. “To inspire people around the world,” he said.”

It’s crazy what a spectacle this was.

“A Connecticut man called 911 on Wednesday to report a deli was making his sandwich wrong. “I specifically asked for, um, little um, turkey, and little, um, ham and a lot of cheese and a lot of mayonnaise,” he told the dispatcher. “And they are giving me a hard time so I was wondering if you could stop by…””

“Security cameras get a bad rap, especially in the age of Google Earth, when satellite-powered privacy invasion is a legitimate concern. Sometimes, however, the omnipresence of surveillance in our lives unwittingly captures what makes them worth living. In a new ad from Coke Latin America and production company Landia, security camera footage from around the world is used to show off some creatively titled anti-crimes that tend to go under-reported. These acts range from “Honest Pickpocketing” (returning a wallet someone dropped) to “Potato Cheap Dealing” (giving a bag of chips to the homeless guy outside of a convenience store.)”

What a wonderful video.

“7-week-old Ragazzo tries to jump from the coffee table to the couch for the first time, and if this anything to go by, maybe the last time too.” 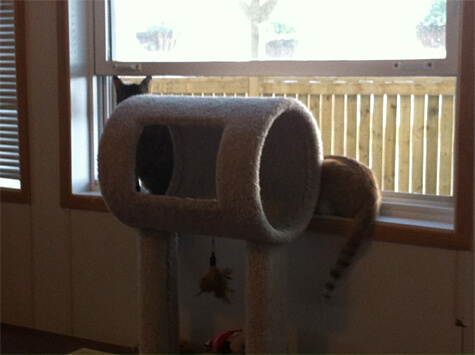 My two kitties formed one long kitty in this carefully angled photo, lol.

Linda Hoang is a Canadian blogger based in Edmonton, Alberta, who writes about travel, food lifestyle and pet topics. She's also a seasoned social media/digital strategist with a journalism background. Linda loves exploring the world with her husband Mike, eating their way through cities, supporting local businesses, and photographing Instagrammable Walls. She is the founder of the Edmonton International Cat Festival and a fur-mom to two cats and two dogs.
PrevPreviousPhoto of the Day: Sunday, June 17, 2012
NextPhoto of the Day: Monday, June 18, 2012Next