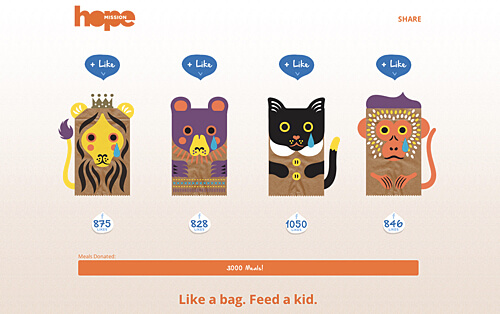 Hope Mission’s digital campaign #FeedaKid asked for a ‘like’ in exchange for a meal.

The #feedakid campaign launched on Nov. 13. Visitors to the website were asked to ‘like’ one of four brown paper bag characters – each symbolizing the lunch bags Hope Mission gives to at-risk children from low-income families.

“Most people know us for helping the homeless but we have been working with kids for many years and we’re committed to working towards preventing homelessness as well as ending it,” Komarniski says.

“The cycle of poverty starts young.”

#feedakid lived online and was primarily shared online. Those who ‘liked’ a digital lunch bag (the cat was my favourite) were prompted to spread the word, share their like and a link to the campaign website to their social networks.

The campaign was meant to run over a three-day period, but the 2,000-meal goal was reached within 12 hours.

Two more companies – EECOL Electric Group and Degner Construction – then came forward to sponsor an additional 1,000 meals. That goal was reached by 6 p.m. the next day.

“I think it’s a testament to our online community,” says Komarniski. “I think it shows they do care about causes in their community and they really get behind it when it’s presented in an inspiring way.” 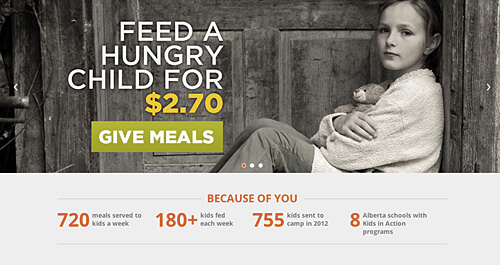 Hope Mission serves 720 meals per week to 180+ kids in the Edmonton area.

While a cause is critical in the success of such campaigns, Komarniski says it’s a combination of things – good photography, design, and concept, that have led to Hope Mission’s success.

“There’s a lot of things coming at you on social media so to get a campaign to take off nowadays you really got to break through the noise,” he says. “We really believe that you can have fun and be creative and inspire people to get behind serious causes.”

The success of #feedakid follows the success of the organization’s Share Hope campaign, which ran last year, and asked users to share a photo of what ‘hope’ meant to them. Share Hope resulted in more than 1,000 donated meals.

“But this (#feedakid) turned out to be way more shareable,” Komarniski says.

“It was super easy for people to do it and it felt good and with a single click they could provide a meal and engage with these cute characters.” 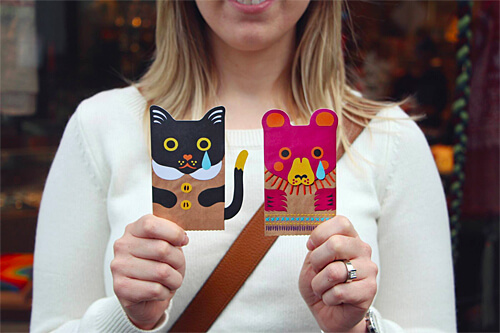 Along with providing meals and mentoring for kids, they also send hundreds of them to camp each summer.

#feedakid proved to be an easy and effective way to raise awareness for the organization’s kids’ programs, and help kids in need. Its success also means you can expect more unique, digital campaigns from Hope Mission in the future.

“We are going to meet our supporters, potential supporters, and advocates where they are, and they tend to be online,” Komarniski says.

“It happens to be a really powerful way to connect with the most amount of people in the shortest amount of time. That’s time well spent. That’s energy well spent. And we hope that it makes a difference and makes Edmonton stronger.”

Linda Hoang is a Canadian blogger based in Edmonton, Alberta, who writes about travel, food lifestyle and pet topics. She's also a seasoned social media/digital strategist with a journalism background. Linda loves exploring the world with her husband Mike, eating their way through cities, supporting local businesses, and photographing Instagrammable Walls. She is the founder of the Edmonton International Cat Festival and a fur-mom to two cats and two dogs.
PrevPreviousSocial Media Notes (#5) – Links for the Week of Nov. 11-17
NextReview: Nello’s RestaurantNext