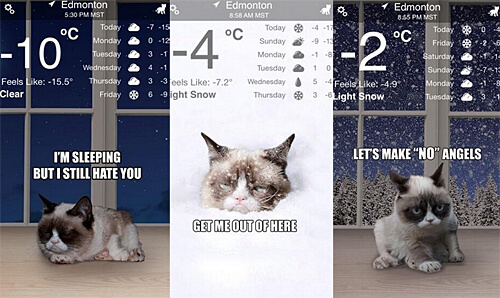 Forecast looks to be cloudy with a chance of kittens! The popular Weather Kitty app (featuring Grumpy Cat) was developed by Edmonton’s own Shiv Takhar.

The purr-fect app comes from Edmonton

The duo behind an Edmonton-based software company is cleverly tapping into the Internet’s obsession with cats – and a growing celebrity cat craze – as a way to grow their business.

Shiv Takhar (@ShivTakhar) and Suraj Hemnani are the founders of Creative Shark Software Inc., and the creators of Weather Kitty, an iPhone app that delivers daily weather forecasts set to backdrops of photos of adorable kittens.

The app is currently ranked as 16 out of 300 free weather apps available in the App Store, with a 4.5-star rating. When Weather Kitty first launched, it debuted at number 2. The app has been downloaded worldwide, including in Canada, the U.S., Europe and Asia.

“It’s insane,” says 31-year-old Takhar, who graduated from NAIT’s Computer Systems Technology program in 2002. “For a while, we were the number 1 app in several European countries. The reviews are off the charts.”

But it’s the for-purchase, in-app themes that have led to the company’s financial success.

Grumpy Cat, the Internet’s most famous cat, lends her signature scowl and catty comments – including “Your forecast … 100% chance of failure,” and “Not acid rain? Not impressed” – to Weather Kitty for $1.99.

Weather Kitty debuted as the number two free weather app when it first launched in August.

Grumpy Cat became an Internet sensation in September 2012, after photos of the cat, who always appears to be frowning, were posted to Reddit. Her photos quickly went viral, as people Photoshopped and shared funny captions set to Grumpy Cat’s frowning face.

Since then, she’s become a “spokescat” for Friskies and has also made numerous television appearances.

Takhar and Hemnani met Grumpy Cat in March at South by Southwest technology conference in Texas.

“There were line-ups around the block to see Grumpy Cat,” Takhar says. “We figured ‘yeah, this would be a good cat to have in our app.’”

They pitched the idea to Grumpy Cat’s manager, who loved it. A few months later, in August 2013, Weather Kitty was released with Grumpy Cat as the app’s first featured famous Internet cat.

The app generates a suitable Grumpy Cat photo and caption based on time of day and weather forecast. It includes five-day and hourly weather forecasts, with highs, lows, humidity, wind and sunrise/sunset information pulled from Weather Underground, a service owned by The Weather Channel.

Since the app’s launch in the summer, most photos have been set to sun, clouds or rain. Now that winter’s here, Takhar says on snowy days users can expect to see Grumpy Cat scowling in the snow. 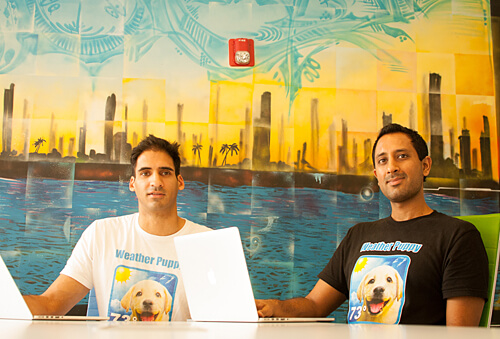 Takhar builds and markets apps full-time through Creative Shark Software. Born and raised in Edmonton, Takhar met Hemnani at a tech conference when he moved to Miami in 2006.

After working for different companies, Takhar returned to Edmonton in 2012 to launch Creative Shark Software and build his own apps. His long-term vision is to live and work in Canada.

“It’s really fun to create something that hasn’t been done before,” Takhar says. “It’s cool to make people smile around the world.”

And the cat’s not the only animal out of the bag. Dog lovers can get their fix, too, with the free Weather Puppy app. Weather Puppy was actually released before Weather Kitty, in 2012, and its success led Takhar and Hemnani to expand from dogs to cats.

“But we probably could have gone with cats first because they’re so famous,” Takhar says, laughing.

Both Weather Kitty and Weather Puppy are only available for iOS on iPhone, iPad or iPod Touch; however, apps for Android devices are currently in the works.

In the meantime, Takhar, who considers himself a dog person, says he’s optimistic about the growth of his business.

“There are more and more celebrity cats every day now. With all of these up-and-coming stars, I don’t see it slowing down.”

The weather is checked a combined 60,000 times per day across both apps.

Combined, the weather has been checked on both apps more than 10 million times.

Linda Hoang is a Canadian blogger based in Edmonton, Alberta, who writes about travel, food, lifestyle and pet topics. She's also a seasoned social media/digital strategist with a journalism background, the founder of the Edmonton International Cat Festival and co-founder of Stop Race Based Hate, an online anti-racism education tool. Linda loves exploring the world with her partner Mike, eating their way through cities, supporting local businesses, and photographing Instagrammable Walls. Linda is a fur-mom to two cats and two dogs.
PrevPreviousA Pittance of Time: Remembrance Day
NextSocial Media Notes (#5) – Links for the Week of Nov. 11-17Next