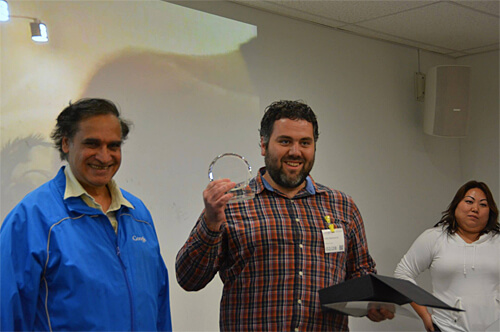 Edmonton photographer Kyle Giesbrecht (@fotofotoYEG) is being recognized by Google for his creative work with the Edmonton Corn Maze.

Giesbrecht says he was “pretty pumped” when he learned his Google Business Photo / Street View tour of the Edmonton Corn Maze – created last August – had been chosen for the Most Creative Tour Award of 2013 by Google.

“My reaction was to screenshot it and text it to everyone I knew,” Giesbrecht says, laughing.

Giesbrecht take photos inside businesses, stitches the photos together and turns it into an interactive, 360-degree online tour that appears on the businesses’ Google search result.

His tour for the Edmonton Corn Maze made international headlines and put the local maze on the map – as the world’s first corn maze on Google Street View.

“It was something unique that people from around the world could play around with and have some fun,” says Edmonton Corn Maze owner Jesse Kraay.

“The local media attention was great as it helped raise our profile and get people though the gate. The attention from other places was really cool and it was fun to see the reach and exposure we got from doing this from around the world.” 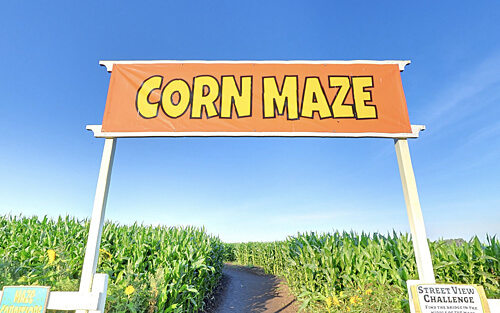 The Edmonton Corn Maze is the first corn maze in the world on Google Street View.

“I think that it’s great Kyle has won the award. He was easy to work with and excited about the project,” Kraay says.

“I think it’s really cool that he has embraced this technology and is being recognized for his work.”

Giesbrecht went to Google HQ in California to pick up his award at the end of February.

“And at the end of the day was the awards ceremony,” he says. “I got a glass, plaque trophy.” 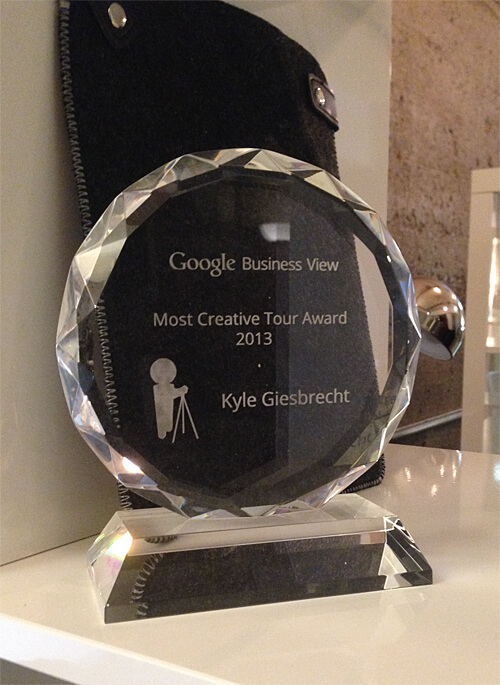 Giesbrecht beat out more than 600 Google Business Photo-certified photographers from across North America to win the Most Creative Tour award.

A glass plaque trophy that means Giesbrecht beat out hundreds of Google-certified Business photographers from across North America. And as if beating out hundreds for the title wasn’t enough, the best part about receiving the award is that Giesbrecht didn’t even apply for it.

Google saw his tour and sought him out.

Validation that wasn’t necessarily needed. When Giesbrecht first began taking Indoor Street View photos for businesses, he spent a lot of time using social media to raise awareness about the fact that such a service even existed.

That’s no longer the case. 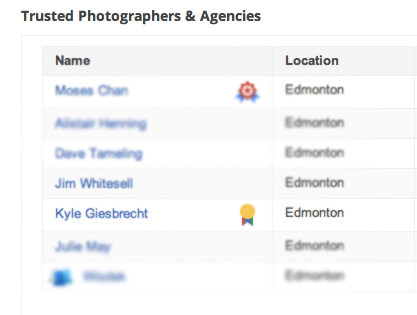 Indoor Business Photos are becoming more common, as more businesses try to use the technology to improve its online presence and bring in more customers.

Giesbrecht says his work on the Edmonton Corn Maze was one of the most challenging tour he’s done – since it wasn’t indoors.

“There were technical challenges because I take multiple exposures and they get blended together to make the 360 degrees, so when things move like clouds or cornstalks wave in the wind, it can be tricky to get things to blend properly and look good,” he says.

“It was also more challenging because a lot of the shots looked the same because you’re in the corn maze. I kind of got lost myself putting it together.”

But the extra work clearly paid off.

“It’s definitely on my mind, how I’m going to get my award next year,” Giesbrecht says.

“So if you or any of your readers know a place…”

Linda Hoang is a Canadian blogger based in Edmonton, Alberta, who writes about travel, food, lifestyle and pet topics. She's also a seasoned social media/digital strategist with a journalism background, the founder of the Edmonton International Cat Festival and co-founder of Stop Race Based Hate, an online anti-racism education tool. Linda loves exploring the world with her partner Mike, eating their way through cities, supporting local businesses, and photographing Instagrammable Walls. Linda is a fur-mom to two cats and two dogs.
PrevPreviousSocial Media Notes (#21) – Links for the Week of March 3 – 9
NextCTV Morning Live: Talking new Edmonton restaurantsNext