Social Media Spotlight: A look into the past with Vintage Edmonton 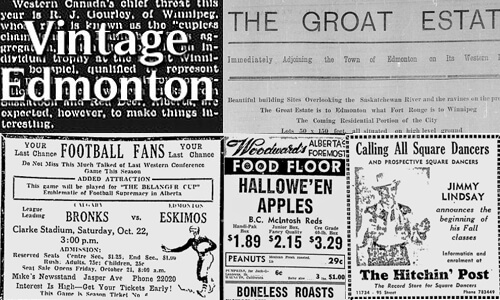 A look in to the past with Vintage Edmonton

Kelly McConkey wasn’t born in Edmonton. He wasn’t raised in Edmonton. And he didn’t know a whole lot about the city – or his neighbourhood – when he moved to town.

Now he’s got more knowledge, passion, and a bigger collection of Edmonton history than many who have been here all their lives.

“I moved up from the United States and I wanted to learn as much as I possibly could,” McConkey (@revrecluse) says.

“It was amazing how much of a layered history Edmonton had and just the more the more I started to dig into it the more I loved it and the more I wanted to find out about it.”

The 50-year-old, self-proclaimed history buff says he started spending a lot of time in the microfilm section of local libraries and visiting local and provincial archives to learn more about his new city.

What started out as a hobby he used to share with his wife, turned into a unique blog showcasing daily snapshots of life in Edmonton from the late 1800s up to the 1980s.

“It started really with just me sending these clippings to my wife and friends and saying, ‘hey take a look at this,'” McConkey says.

“One of my best friends said you should put this on a website and I really hadn’t thought about that before. I thought ‘okay, yeah this sounds like a great idea,’ and it kind of took off from there.” 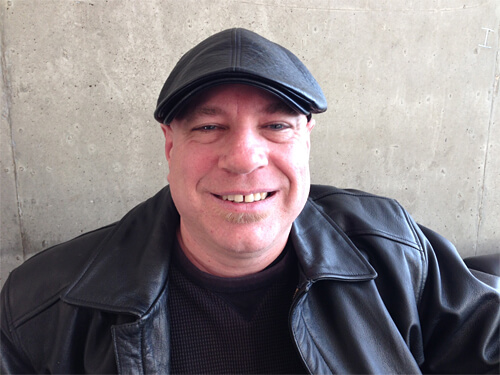 He posts to the blog daily – with content ranging from historical newspaper clippings, ads, audio and video.

“What was playing in a movie theatre, what sports teams were playing, the kinds of things that are incidental but a lot of fun to find out about.”

It’s one of the most fascinating local blogs – simple, interesting, and presented in a way that’s quick and very easy to digest.

Some recent posts include an ad for Gemmell’s TV, a bingo ad showing 20 games for $2 at the Edmonton Gardens, a TV listing for CFRN (including the news at 6:30 p.m., Amos N’ Andy at 8:30 p.m., and Duffy’s Tavern at 9 p.m.) and several newspaper articles outlining the strange disappearance (and subsequent reappearance) of a University of Alberta student in 1928.

McConkey typically tries to plan his posts a week in advance and says he shares whatever catches his eye, that he thinks others would find interesting as well. 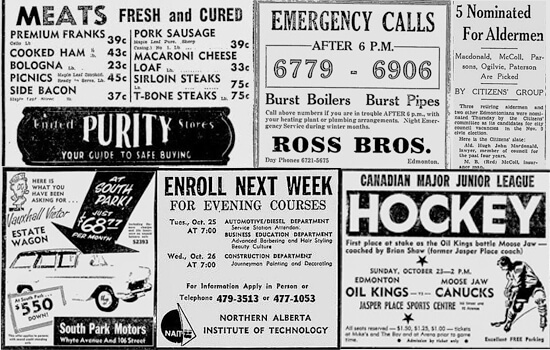 Some historical newspaper clippings. A sample of posts you’ll find on Vintage Edmonton.

While McConkey has amassed quite a collection on his own, he also receives a number of emails, photos and historical ‘tips’ from others. And he gets a lot of great feedback.

“I’ve had people email me and say ‘a friend of mine sent me your website. I expected to be on there for five minutes and four hours later I was still going through your site there were memories I didn’t even know I had.'”

It’s clear he’s passionate about history and wants to spread that love and knowledge to others.

“Whether you crack open a history book, go to Fort Edmonton Park or read Vintage Edmonton, there’s so much to learn. You have an emotional connection to where you live when you learn more about history.”

Linda Hoang is a Canadian blogger based in Edmonton, Alberta, who writes about travel, food lifestyle and pet topics. She's also a seasoned social media/digital strategist with a journalism background. Linda loves exploring the world with her husband Mike, eating their way through cities, supporting local businesses, and photographing Instagrammable Walls. She is the founder of the Edmonton International Cat Festival and a fur-mom to two cats and two dogs.
PrevPreviousRecap: A taping of The Colbert Report – experience + tips!
NextGiveaway: Tickets to the Gluten-free Living Edmonton Health ShowNext