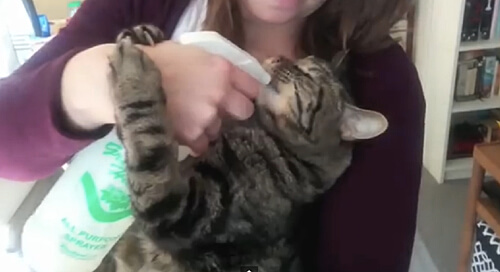 Move over Grumpy Cat, there’s a new famous cat on the Internet and his name is Joey.

Seven-year-old tabby Joey has found fame online after his owner, Edmontonian Hilary Darrah, uploaded a one-minute video montage of the cat to YouTube earlier this month.

“The average person does not normally get 200,000 views on a video they post so it’s absolutely a success,” Darrah says, but adds, while laughing, “I still think it’s only viral-ish.”

Darrah, 28, created the video as part of a Digital Communications class she’s taking through the University of Toronto.

The video is driven by orchestra music and text narration, and shows just how much Joey loves drinking water – from a watering can, in the shower, from the sink tap, and most of all from his water bottle.

“Every cat mom thinks her cat is special so I kind of had hopes that the video would go viral but I didn’t initially start with the intention that it was going to go viral,” Darrah says.

It wasn’t until she submitted the video to the popular blog Cute Overload, when the views started rolling in.

“Once I had done that, that’s when I got my first 5,000 views and then from there that’s where the rest of the Internet slowly started catching on,” she explains.

“I would look at the count in the morning and then look at the end of the day to see how high the growth was that day. My co-workers were shocked because one of them saw the video a second time and they said ‘you doubled, you went form 60,000 to 120,000 views in the one day.” 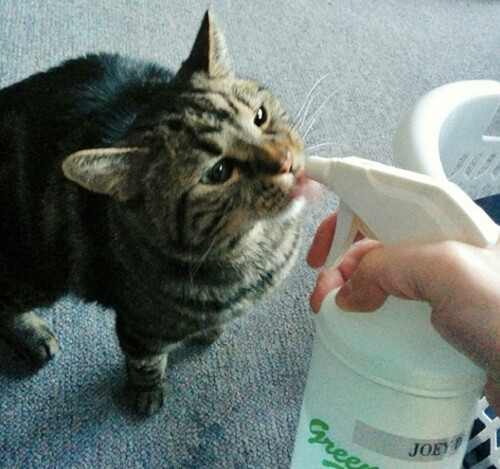 Darrah says the experience has been “totally weird” – including seeing the “business side” to viral videos.

“It’s not always a very organic process like oh people just find it and it’s at one million views,” she says, explaining that once her video hit a certain number of views, companies contacted her asking for licensing and offering to help protect her copyright, while pitching the video to more websites to up the view count.

“It’s been very interesting to see that side of things,” Darrah says.

She’s partnered with Jukin Media, who shops her video around to various websites. If Darrah profits from the video then Jukin would get a portion of the profits.

So far however, despite the huge number of hits, Darrah hasn’t actually made money off of her feline’s newfound fame.

“I hurt myself by using music that I thought was copyright-free but actually was not public domain,” Darrah explains.

“For advertising on Google, the video cannot have copyright claims on it, so you won’t make any Google money unless you take the music out. I can take it out but I haven’t yet.” 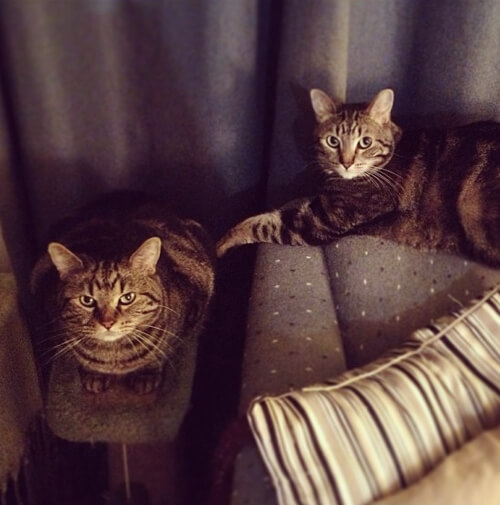 Joey and his brother Andy. (We’re told Andy hasn’t shown any jealousy since Joey got famous).

With over 100 hours of video uploaded to YouTube each minute, it’s incredible to see Darrah’s video break through the content overload and find some viral success.

She doesn’t think the Internet cat craze will die down anytime soon, and offers up advice on how to keep the phenomenon going.

Darrah hasn’t received a grade on the video yet but is told its the first “viral” video to ever come out of the class.

She hasn’t figured out what her next video featuring her beloved Joey will be about just yet, but admits she is thinking about a sequel.

“I have a bunch of people who have subscribed to the channel with the expectation that I’ll be posting more videos so now I feel like I kind of have to do that now,” she says.

Linda Hoang is a Canadian blogger based in Edmonton, Alberta, who writes about travel, food, lifestyle and pet topics. She's also a seasoned social media/digital strategist with a journalism background, the founder of the Edmonton International Cat Festival and co-founder of Stop Race Based Hate, an online anti-racism education tool. Linda loves exploring the world with her partner Mike, eating their way through cities, supporting local businesses, and photographing Instagrammable Walls. Linda is a fur-mom to two cats and two dogs.
PrevPreviousSocial Media Notes (#23) – Links for the Week of March 17 – 23
NextSocial Media Notes (#24) – Links for the Week of March 24 – 30Next